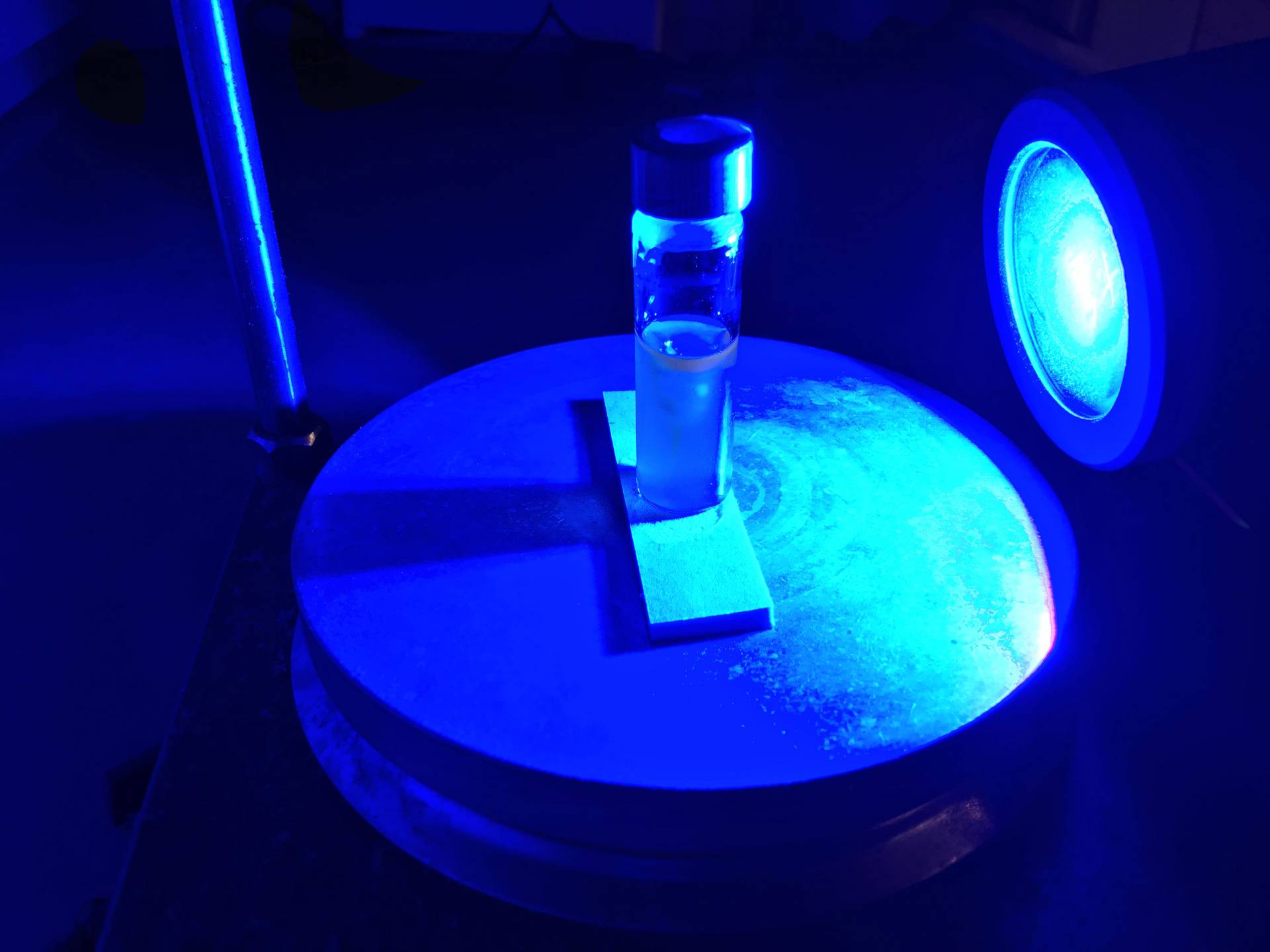 A blue LED shines on a vial containing heavy water, a pharmaceutical compound and a light-activated catalyst. Princeton chemistry professor David MacMillan and his colleagues have developed a new photocatalytic approach to hydrogen isotope exchange (HIE) that turns a multi-month process into a one-day step, speeding the arrival of new drugs to the marketplace.

Radioactivity may have a bad rap, but it plays a critical role in medical research. A revolutionary new technique to create radioactive molecules, pioneered in the lab of Princeton chemistry professor David MacMillan, has the potential to bring new medicines to patients much faster than before.

“Your average drug takes 12 to 14 years to come to market,” said MacMillan, the James S. McDonnell Distinguished University Professor of Chemistry. “So everything that we can do to take that 14- or 12-year time frame and compress it is going to advantage society, because it gets medicines to people — to society — so much faster.”

Tracing the path of a chemical that dissolves into the bloodstream presented a serious challenge, but one that radiochemists solved years ago by swapping out individual atoms with radioactive substitutes. Once that is done, “the properties of the molecule — of the drug — are exactly the same except that they’re radioactive, and that means that you can trace them really, really well,” MacMillan said.

But that introduced a new problem.

“Getting these radioactive atoms into the drug is not a trivial thing to do,” he said. “People have developed long, sometimes month-long, two-month, three-month long sequences just to get a tiny amount of a substance with a few radioactive atoms.”

But now he and his colleagues have found a better way, drawing on their work using blue LED lights and catalysts that respond to light, known as photocatalysts. Their research was published online in the journal Science on Nov. 9.

“It was a wacky idea! Fortunately, it worked,” MacMillan said. “What we came up with was, if you shine light on them, and you have a photocatalyst, could these photocatalysts actually remove the non-radioactive atom and then install the radioactive atom?”

MacMillan’s technique uses “heavy water,” which replaces the hydrogen (H) in H2O with tritium, a radioactive version of hydrogen that has an extra two neutrons per atom.

“If you just let your drug sit in the radioactive water and shine light on it with a catalyst, the catalyst will remove the atom which is not radioactive — in this case it’s hydrogen — and replace it with tritium,” he said.

Suddenly, attaching one of these atomic labels takes hours instead of months, and the technique works on many kinds of frequently used compounds. The researchers have already tested it on 18 commercially available medicines, as well as candidates in the Merck drug discovery pipeline.

For compounds that don’t need radioactive tags, the same one-step process can swap in deuterium, a version of hydrogen with only one extra neutron. These “stable labels” (with deuterium) and “radio labels” (with tritium) have countless applications, in academia as well as drug discovery.

The simplicity of this new approach has another implication, said Jennifer Lafontaine, the senior director of synthesis and analytical chemistry for Pfizer in La Jolla, California, who was not involved in the research.

Because the previous process was so resource intensive, deuterium- or tritium-labeled molecules were often only created for chemicals that were “quite advanced in the drug discovery process,” she said. “This methodology could therefore open the door to earlier and expanded use of isotopic labeling in drug discovery, significantly enhancing our ability to study drug candidates on a deeper level, and across a range of applications.”

This new method leverages the emerging field of photocatalysis pioneered at Princeton and applied it to yet another new field, MacMillan said. It has obvious financial value as well, but he waved that off.

“No one’s patenting any of this, because we want it to be available for everyone to use,” MacMillan said.

This technology was developed in collaboration with Merck at Princeton’s Merck Catalysis Center, where Princeton graduate student Yong Yao Loh and postdoctoral researcher Kazunori Nagao conducted research using the radioactive material, said Ian Davies, a co-author on the Science paper who was the principal investigator at the partner lab at Merck while the research was being performed.

“This is a great example of a Princeton-industrial collaboration that benefits science and all of society,” Davies said.

The research was supported by the National Institutes of Health (R01 GM103558-04 to D.W.C.M., Y.Y.L. and K.N.), a graduate fellowship from the Agency for Science, Technology and Research (Y.Y.L.), and the Japan Society for the Promotion of Science for a postdoctoral fellowship (K.N.).