Optimeos Life Sciences, a startup founded by two Princeton University faculty members, has reached agreements with six pharmaceutical companies to develop therapeutics using a Princeton-developed drug delivery technology. The collaborations have the potential to improve the effectiveness of medications for the treatment of diseases, ranging from cancer to diabetes.

Optimeos, founded in 2016 by Robert Prud’homme, professor of chemical and biological engineering, and Shahram Hejazi, a faculty member in the Keller Center for Innovation in Engineering Education and electrical engineering, focuses on bringing technology developed over 15 years in Prud’homme’s lab to market. The technology, called flash nanoprecipitation, enables the encapsulation of drugs into nanoscale particles that improve delivery and effectiveness. 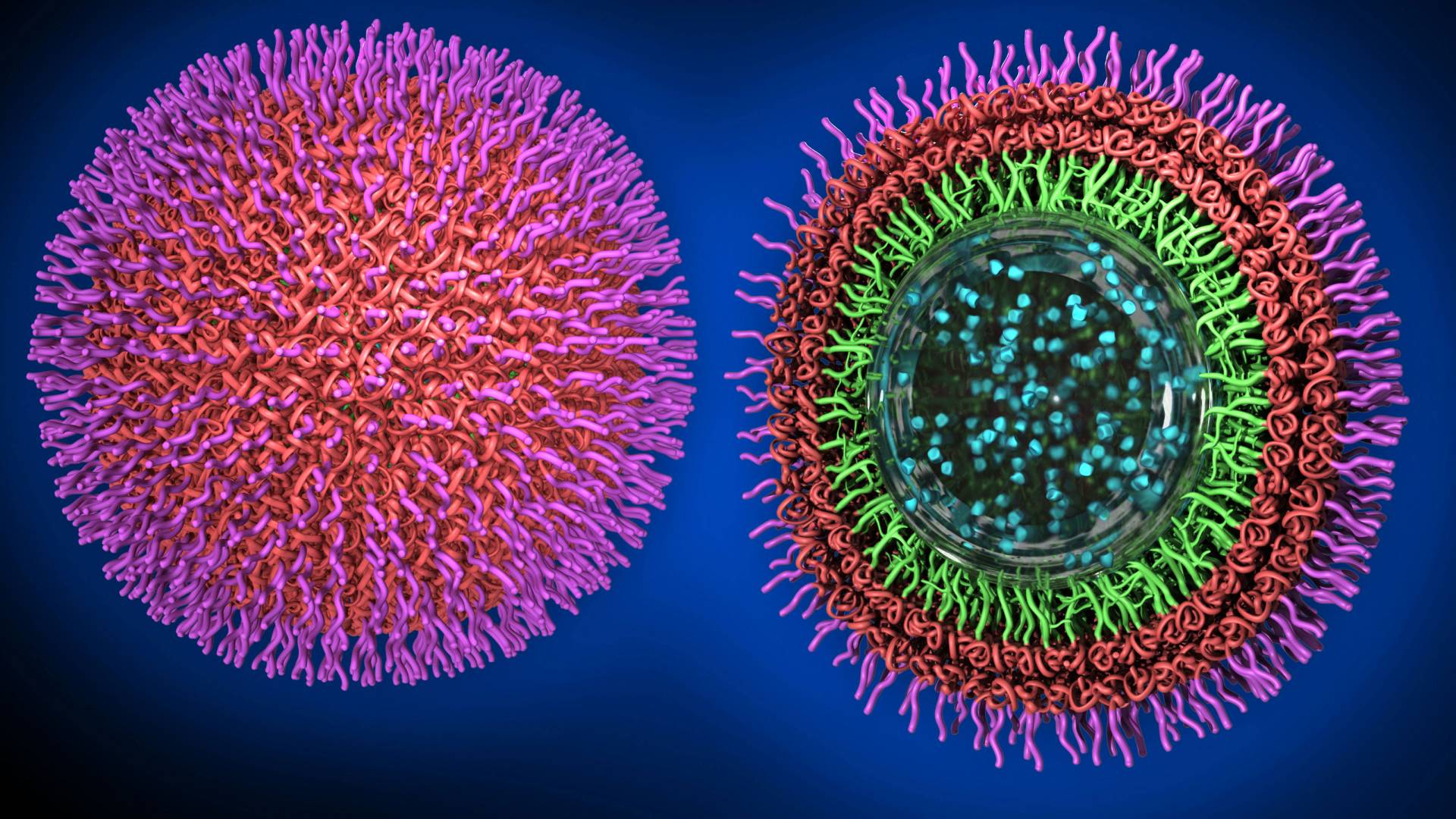 The startup Optimeos, founded by two Princeton faculty members, has agreements with pharmaceutical companies to bring a nanoscale drug delivery system to market. Developed in Robert Prud’homme’s lab, the system is a vehicle for delivering medications to precise locations in the body or the interior of cells to treat myriad diseases, including cancer and diabetes. Shown is an artist’s rendering of Optimeos’ nanoparticle system.

The new venture extends the impact of the technology, which already is being used in a project with the Bill and Melinda Gates Foundation. The foundation awarded Prud'homme's lab a $1.2 million grant in 2016 to apply their technology to increase the effectiveness of drugs used in global health. Solutions for global health problems have to be low cost and robust, and the flash nanoprecipitation process is both. The method has been applied to three drugs sponsored by the Gates Foundation. The first was for a drug to treat diarrhea in infants caused by drinking polluted water, the second a tuberculosis drug, and the third a single-dose treatment for malaria.

Optimeos’ new agreements involve creating improved delivery methods for six different medicines. The names of the six biopharmaceutical companies are currently undisclosed due to the proprietary nature of the ventures. The targeted indications for the various projects are immuno-oncology, autoimmune diseases, diabetes, diseases of the central nervous system and ocular diseases.

These new projects address an inverse set of constraints to that of the Gates Foundation. With Gates, the goal is to take drugs that normally dissolve poorly in the body, because they are water-resistant, and use the delivery system to increase absorption. These projects also need the formulations to be inexpensive, as well as impervious to high humidity and other extreme storage conditions. In contrast, the drug companies working with Optimeos need methods for delivering highly soluble biologics — a class of therapeutics including proteins, peptides and nucleic acids. The structural complexity of biologics imparts higher potency and greater specificity, which causes fewer side effects. However, biologics require delivery through frequent injections, and their activity is restricted to targets outside the walls of individual cells, unless sophisticated pharmaceutical formulations are used.

“The future of therapeutics are potent biological drugs, many of which have delivery challenges with respect to how much drug needs to be delivered to exactly where in the body, while minimizing side effects,” Hejazi said.

Optimeos is overcoming the limitations of biologics by encapsulating them into carefully designed nanoparticles that are 10-times smaller than a red blood cell, or into larger microparticles about the width of a human hair. Such particles have been difficult to manufacture in a reproducible and scalable way, until now.

One use of these slow-releasing particles is in the treatment and management of diabetes. In 2019, Optimeos received funding through a National Science Foundation grant to develop a once-monthly injection of liraglutide, a non-insulin medicine used to treat type II diabetes and obesity. Liraglutide is currently administered by a daily injection. The Optimeos formulation aims to reduce the total amount of drug needed, reduce side effects and reduce the frequency of injections. These attributes enhance patient comfort, adherence to treatment regimens, quality of life, cost of care, as well as the medical outcomes, said Robert Pagels, director of R&D for the company and former graduate student of Prud’homme. (As a student in 2017, Pagels' pitch of the technology won first place at the Keller Center's annual Innovation Forum.)

What makes Optimeos’ approach novel is that the particles can be easily scaled to accommodate mass production needed for the marketplace. “I would say none of the technologies out there that are being published on or worked on can be, in fact, scaled up," said Hejazi.

As the onetime head of the Kodak Molecular Imaging Group, now Carestream, Hejazi knew that a persistent problem in the marketplace is that many innovations in nanotechnology cannot be reproduced consistently at industrial scales. Flash nanoprecipitation and its corollary, called “inverse flash nanoprecipitation,” solve that problem, Hejazi said.

Most methods of creating nanoparticles require combining active ingredients in precise proportion to each other to create consistently sized nanoparticles. This can often be done effectively in small volumes in the laboratory, but cannot be translated to large-scale production. To solve this challenge, flash nanoprecipitation uses multiple, continuous, high-velocity streams containing the active ingredients that constantly combine at the correct proportions within specially engineered mixing chambers. To create more nanoparticles, the process can be left to run over longer time periods. To increase speed of production, the thickness of the streams can be increased, as long as they are in correct proportion to each other. In effect, it is an assembly line approach to mixing the agents. 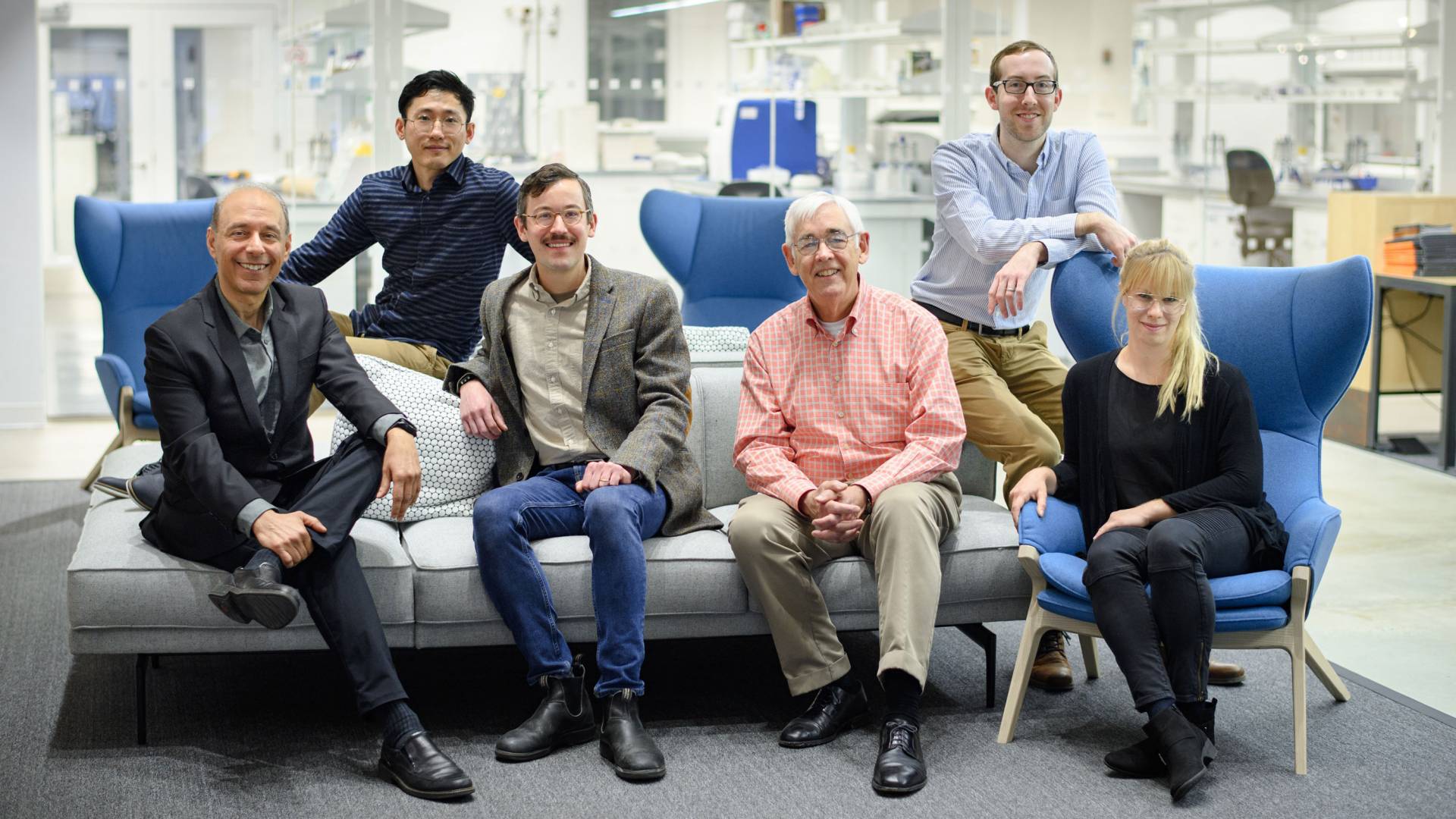 From the lab room to the boardroom

“I have always been passionate about solving health care problems,” said Hejazi. Through his industrial contacts, he identified problems the technology could potentially solve. Once the researchers demonstrated that the technology could meet industry demands, the team filed a patent for inverse flash nanoprecipitation in 2016. This patent, written by Pagels and Prud’homme, details how the flash nanoprecipitation process can be used to encapsulate water-soluble drugs such as biologics. This was a major innovation first developed by Pagels in his doctoral research. He “flipped” the flash nanoprecipitation process (hence the term “inverse”) to encapsulate soluble drugs, rather than water-insoluble drugs. This made the technology applicable to biologics, and opened up this fast-growing market as a potential target.

Hejazi’s experience in industry and venture capital provided the vision that drove the founding of the company. Hejazi helped to raise capital, and the team formed a sponsored research agreement with Princeton to continue developing the technology at Princeton. Optimeos also hired recent graduates from Prud’homme’s lab to work in the company.

Prud’homme sees Optimeos bringing his scientific goals to fruition. “My academic research has focused on understanding the fundamental principles behind polymer assembly and processing to enable us to make elegant nanoparticles,” said Prud’homme. “However, as an engineer, I also want to do something that can make an impact on human health, as opposed to just trying to do a one-shot thing that is beautiful and advances science.”

Optimeos’ story is part of a wider effort at Princeton to move discoveries from University labs to the market and to benefit society more broadly.

The Office of Technology and Licensing at Princeton educates researchers in the steps needed to commercialize technologies and offers entrepreneurial resources, said Anthony J. Williams, new ventures associate in the office.

In recent years, the technology licensing office at Princeton has doubled the creation of startups growing out of faculty research.

Princeton and other universities have been commercializing research since the 1980s when the Bayh-Dole Act allowed institutions to market research that was funded through federal grants. Since then, some of the biggest entrepreneurial success stories at Princeton have been the drug Alimta, a highly effective drug for certain lung cancers, and a breakthrough that tripled the effectiveness of organic LEDs (OLEDS), a display technology now widely used in flat-screen televisions and smartphones.

“Princeton isn’t an ivory tower," said Williams. “Princeton is developing a lot of innovative technologies and a lot of great inventions that can do good in the world.”