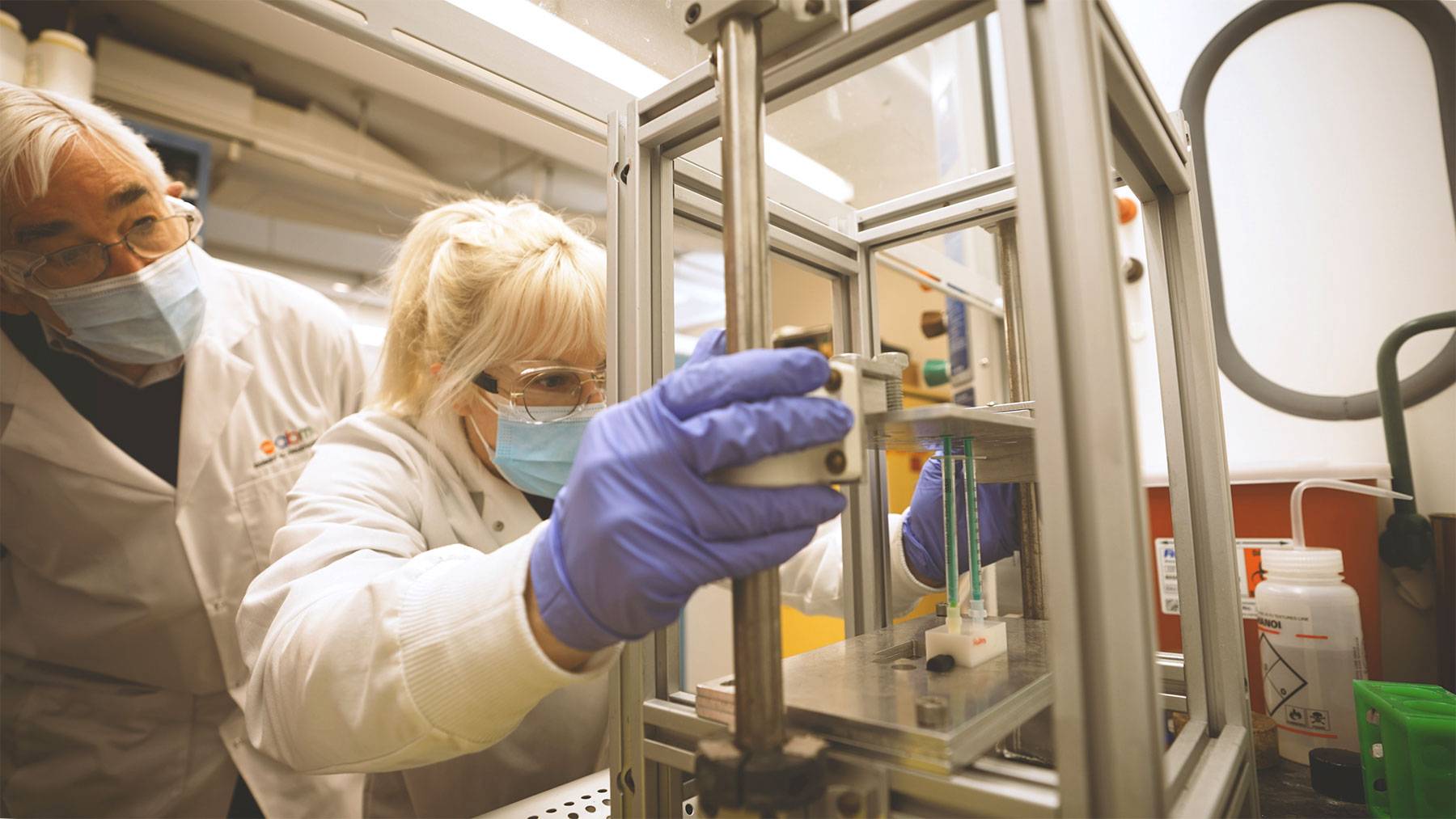 It might not look like much — a plastic box that fits in the hand, with tiny tubes jutting out the top and bottom. Too simple to be cutting edge. Too humble to save so many lives.

But for 20 years, researchers in Robert Prud’homme’s lab have fine-tuned this little box that has revolutionized drug manufacturing, enabling everything from mRNA-based COVID-19 vaccines to malaria drugs. The life-saving molecules that treat those diseases are fragile, and they must survive an epic voyage from a lab bench, through the supply chain, into a blood cell. Encapsulation gives them a secure vehicle and a final heading. It’s a delicate craft backed by complex mathematics, and over the arc of his career, Prud’homme has become a master craftsman. 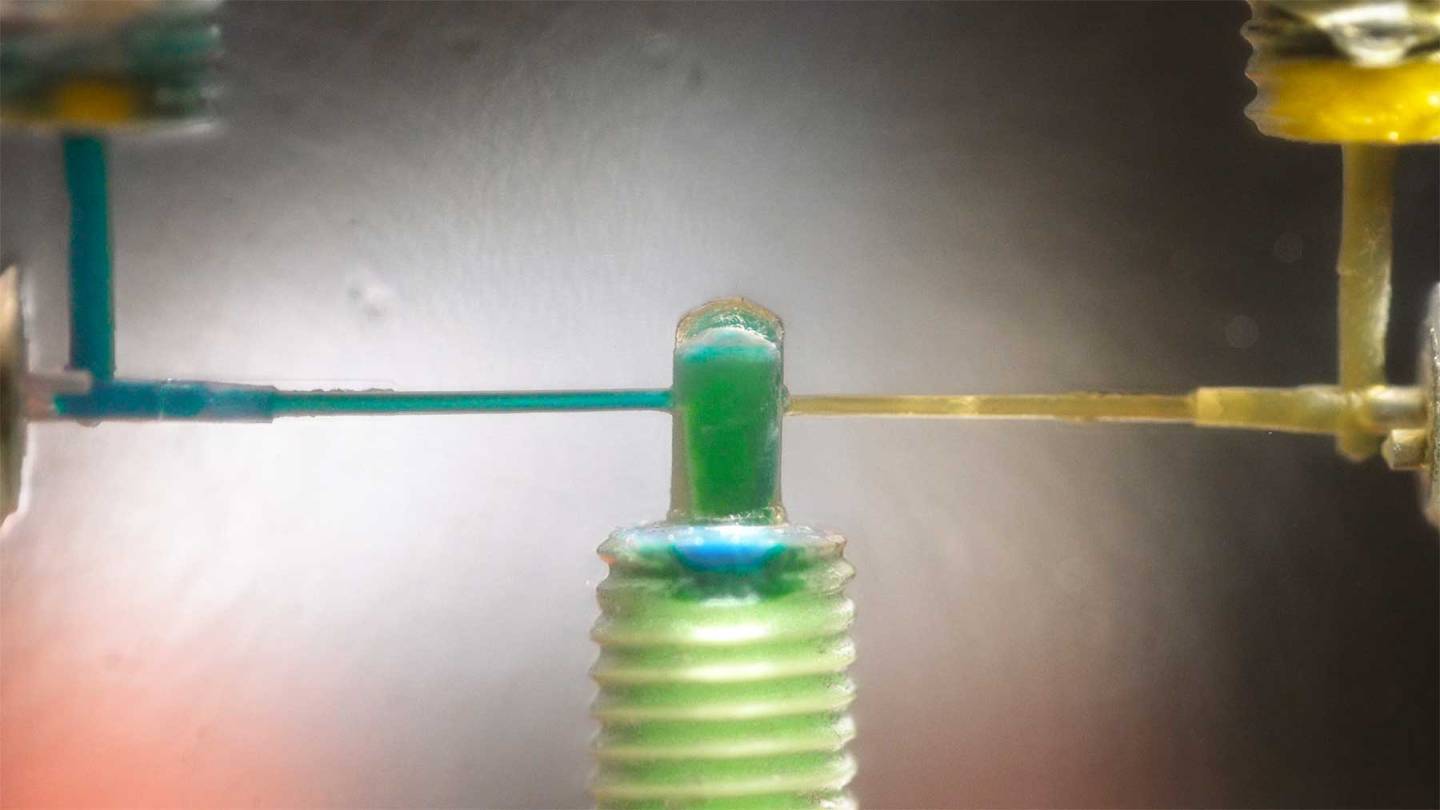 From mRNA vaccines to antimalarial drugs, vast global health initiatives depend on nanoparticle technologies to deliver key molecules to target cells. For 20 years, Robert K. Prud’homme has led a team of Princeton University researchers in developing a simple way to formulate these medicines in a precise, scalable process called flash nanoprecipitation.

In a 2003 paper, Prud’homme, professor of chemical and biological engineering, and Brian Johnson, a 2003 Ph.D. alumnus, described a technique called "flash nanoprecipitation" that mixes liquids to create precise solids — perfectly sized, perfectly shaped, perfectly layered polymer grains, one million times smaller than a grain of table salt. To accomplish it, the researchers created a device called a confined impinging jet mixer that takes in two unlike liquids, mixes them in a flash of turbulent swirling, and pumps out a stream of bespoke nanoparticles. Each particle contains an active ingredient — such as a drug molecule, a strand of RNA, or a protein — wrapped in a package that delivers the payload to its target, whether blood cells, liver cells, or a metastasizing tumor.

The secret to this mixing, said Prud’homme, lies in empty space.

“You need a confined volume where the turbulence can evolve,” he said. “Think of stirring cream into a coffee cup. That stretching, swirling process is how turbulence does the mixing.”

Other methods either take the coffee cup analogy too literally, stirring the solutions in vessels, or use a T-shaped geometry to flow two streams together and sluice them out the bottom. The vessel approach limits production to single batches at a time and fails when applied to large volumes. The T-mixer gets clogged easily at both large and very small scales. Both approaches, while fine for research, produce inconsistent and unstable particles when used at large commercial scales.

The confined impinging jet mixer avoids the limitations of either approach to produce precision medicines at global scales. It allows the continuous flow of large volumes for long periods of time, while avoiding clogging by engineering a cavity where the two liquid jets strike each other in the middle of the open space, away from the walls. The particles form and drop out of the device in less than 50 milliseconds — hence the "flash" in "flash nanoprecipitation."

“The real innovation was in how to make small particles in large volumes,” said Rodney Fox, a leading fluid-dynamics expert and professor at Iowa State University. Fox headed a team that later simulated the process in molecular detail and proved how it worked computationally. He said the rapid timing put Prud’homme’s technique in a class by itself. If mixing doesn’t happen fast enough, particles clump together. But with flash nanoprecipitation, the complex particles form before they can clump. Prud’homme had figured out how to combine materials that normally refuse to combine: by mixing them so fast they don’t have time to react otherwise.

“What people had generally used to generate these types of particles were less sophisticated mixing systems,” said Marian Gindy, a 2008 Ph.D. alumna and an executive at pharmaceutical giant Merck who worked with Prud’homme at Princeton. “Where before you couldn't necessarily make the small molecule drugs and get them to stabilize in this nanoscale form, you now can.” That tiny size is a big advantage when trying to get drugs to the right part of the body, she said.

The method has led to its widespread adoption. Since 2016, the Gates Foundation has sponsored work in the Prud’homme laboratory to produce low-cost and highly effective drugs for use in global health applications. They have demonstrated production of highly stable treatments for malaria, diarrhea and tuberculosis. One of the world’s largest contract research organizations, WuXi AppTec, is building a manufacturing capability based on this technology. Merck has also adopted for its work with RNA cancer therapies.

Mike McDermott, Pfizer’s chief of global supply, has described the impingement jet mixer as “the heart of this whole machine” producing the COVID-19 vaccine.

While scientists and engineers around the world have continued the development of this technology, it originated in Prud’homme’s lab, Fox said. “He’s the father of this idea."

Carsten Losch, chief executive of KNAUER Wissenschaftliche Geräte GmbH, the Berlin-based company that encapsulated the COVID mRNA vaccines, said his firm had invested a lot of effort perfecting the devices to meet the exacting specifications of the pharmaceutical industry.

“The basic research of Professor Prud’homme resulted years later in a technology that manufacturers of lipid nanoparticles use in a similar way today,” Losch said.

“It is incredibly rewarding to be a part of the path from fundamental academic research to major advances in public health,” Prud'homme said.

Editor’s note: This article first appeared on pages 10-11 of the Spring 2022 E-Quad News