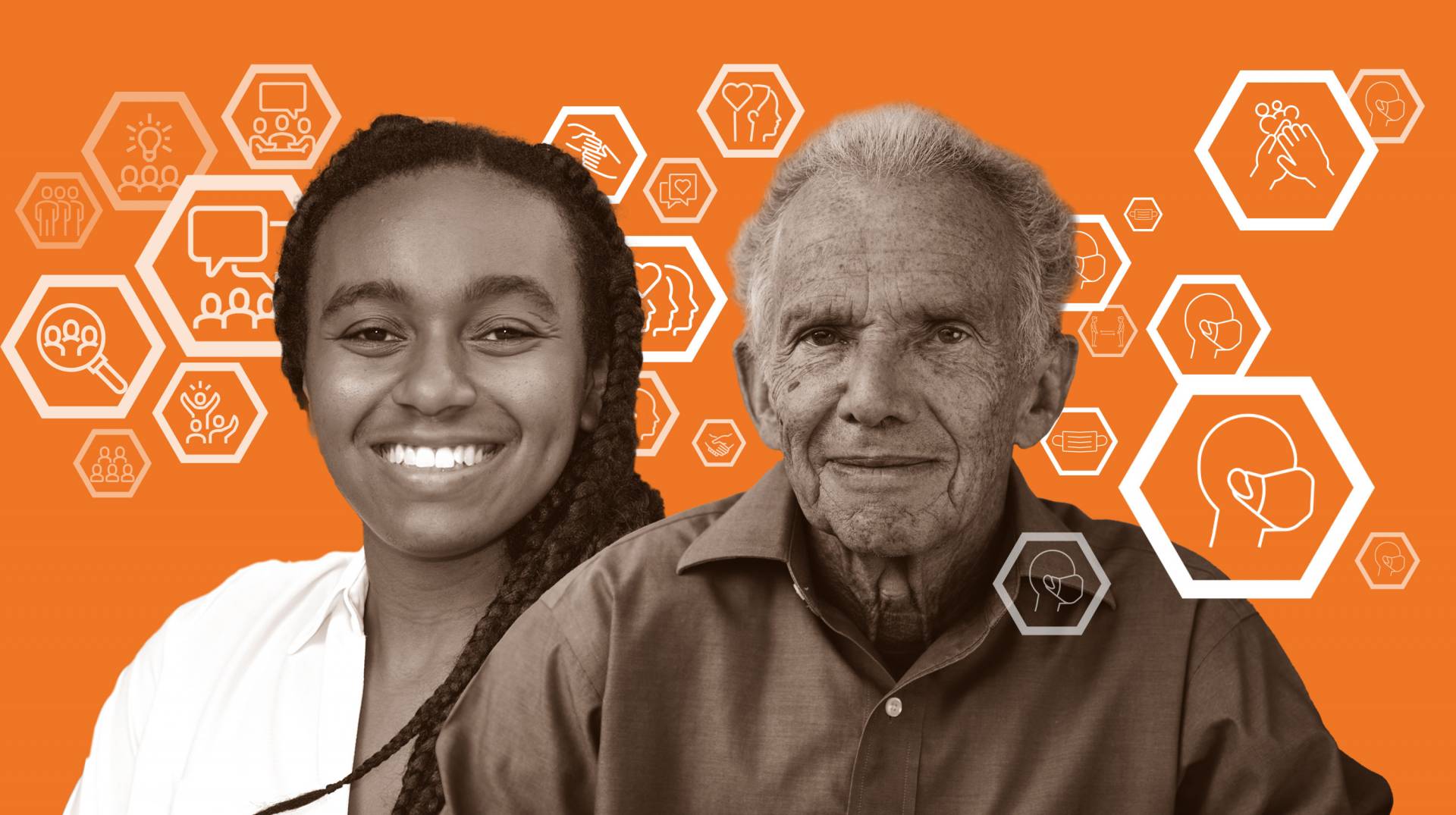 "It is critical to get people to behave in accordance with the CDC guidelines, not just believe that they are the right things to do," say Professor Joel Cooper and graduate student Logan Pearce in a new paper. So they found a way: By combining advocacy with mindfulness, they can create cognitive dissonance that helps people match their behaviors to their attitudes.

Photos (left) by K. Don Pearce and Sameer A. Khan/Fotobuddy

In the face of a global pandemic, with more than 200 million global infections and 4 million deaths, and despite unprecedented efforts by public health officials, celebrities and influencers to convince everyone to wear masks and get vaccinated as soon possible, the results are mixed.

Now, two Princeton researchers have discovered an approach that they found successfully motivated people to make appointments for vaccinations and to consistently follow measures such as social distancing and mask wearing.

“We think we’re onto something unique that hasn’t been tried yet in the COVID context,” said Joel Cooper, a professor of psychology at Princeton. “I kept thinking, there’s a group of people that public service announcements are never going to reach, because they already agree. Oh, they may not be the most enthusiastic, but they already agree that vaccines are good, and people should take them. But they are the ones who find excuses. ‘Oh, it’s too difficult.’ ‘I couldn’t do it now.’ Those are the people who aren’t going to be reached by the other methods going on, but who can be reached with our method.”

Rather than targeting the very vocal minority of people who insist they will never get vaccinated, Cooper and his graduate student Logan Pearce focused on individuals whose actions don’t consistently align with their stated beliefs. In total they studied 101 participants.

“Persuading the remaining doubters is extremely important, but the data highlight a more perplexing and alarming story,” Cooper said. “In a recent study, between 80 and 90% of adults agreed that wearing a mask is an effective method to prevent the spread of COVID-19, but only 50% of the respondents said that they ‘always’ or even ‘mostly’ wore a mask when in close contact with other people. It is critical to get people to behave in accordance with the CDC guidelines, not just believe that they are the right things to do.”

“I’d love to convince the anti-vaxxers, but I honestly don't know what can convince them at this point,” said Pearce, a graduate student in psychology and the first author on their paper in the journal Basic and Applied Social Psychology. “I thought, ‘It’s easier to convince people who already think it’s the right thing to do, but they’re still not doing it.”

Finding what works: Advocacy plus mindfulness

Previous research had found that inducing cognitive dissonance — asking people to hold two contradictory things in mind at the same time — can be an effective tool to encourage shifts in behavior. Pearce and Cooper created cognitive dissonance in their research participants by first encouraging them to advocate for a public health position — such as “It is important to wear masks” or “Vaccinations will help us end the pandemic” — and then asking them to remember occasions when they did not act in accord with that attitude. Humans feel uncomfortable with cognitive dissonance, and the easiest way to ease that discomfort is to change behaviors to become consistent with attitudes.

Some studies have found that the mindfulness piece alone — encouraging people to remember when their actions didn’t match their beliefs — can shift behaviors, but Cooper hasn’t found evidence of that in his own work. The advocacy piece, strenuously arguing for the belief or behavior, is vital, he said. Without it, he said, the mindfulness work can tilt the scale in a counterproductive way.

“People form views of themselves, based on their behavior,” he said. “If you tell people, ‘Well, remember when you didn’t do this,’ whether it’s going to the gym or mask-wearing, it shouldn’t be surprising that they say, ‘Yeah, I guess I’m the kind of person who doesn’t do this. I guess I don’t exercise, I don’t put a mask on, I do go to the store without bringing one. I didn’t really mean to, but this must be who I am.’ So to me, the idea of just reminding yourself of, if you will, ‘bad behavior,’ or behavior contrary to your attitudes, it’s not surprising to me that it doesn’t work.”

Their research was conducted in two waves, with data collected a week apart. During the first session, participants in the cognitive dissonance test group first advocated for consistent adherence to safety protocols and then were asked to recall times where they had acted unsafely or avoided getting vaccinated when they had the opportunity. Other volunteers were assigned to one of three control groups: advocacy only, mindfulness only, or neither. Participants in all three groups watched a short video encouraging mask-wearing and other anti-COVID-19 measures.

A week later, the researchers assessed their participants’ reported behaviors. Members of the cognitive dissonance group were much more likely during the intervening week to have complied with guidelines and sought out vaccination appointments than participants in one of the control groups.

Pearce found the 101 participants via the online tool Prolific, while working remotely at her home near Atlanta. The participants ranged in age from 18 to 67 and came from 18 countries including the United States, the United Kingdom, Poland and Portugal.

Much of this research was conducted before vaccines were widely available, so Cooper and Pearce largely focused on mask wearing and social distancing. As they were launching the study, they decided to add a few questions about whether the participants had made or intended to make an appointment to get the shots.

Pearce and Cooper are looking for ways to implement their findings widely, by inducing dissonance on a greater scale. “I want this project to reach beyond academia, to really make a difference,” Pearce said.

She suggested holding contests in which people compete by writing or recording compelling arguments to become vaccinated, whether via video, essay, poem or drawing. Similar efforts have included the “Wear a Mask New York Ad Contest” and the “Mask Up Alabama Video Contest.”

What sets her contest apart is the second step: including mindfulness. Rules would require contestants to include recollections of times they did not actually follow COVID-19 guidelines, such as choosing to forego a vaccination when one was available. Admitting this will both make it more likely that the contest participant will shift their own behaviors, and it will encourage others to make better choices.

For community leaders who don’t want to host a contest, Pearce and Cooper have other ideas. A church group might suggest its members go through the exercise as an act of public service, for example.

But whatever approach is taken, the combination of the two is key, Pearce said. “I can use cognitive dissonance in my life to change my own behavior, and I want to help other people do that, too.”