Masking — along with social distancing, hand washing, and other so-called “non-pharmaceutical interventions” (NPIs) — proved very effective at limiting the spread of COVID-19, and simultaneously drove down rates of endemic diseases like colds, flu, RSV and others. This prompted infectious disease researchers to ask whether longer-term implementation could reduce flu and RSV outbreak over the long term. 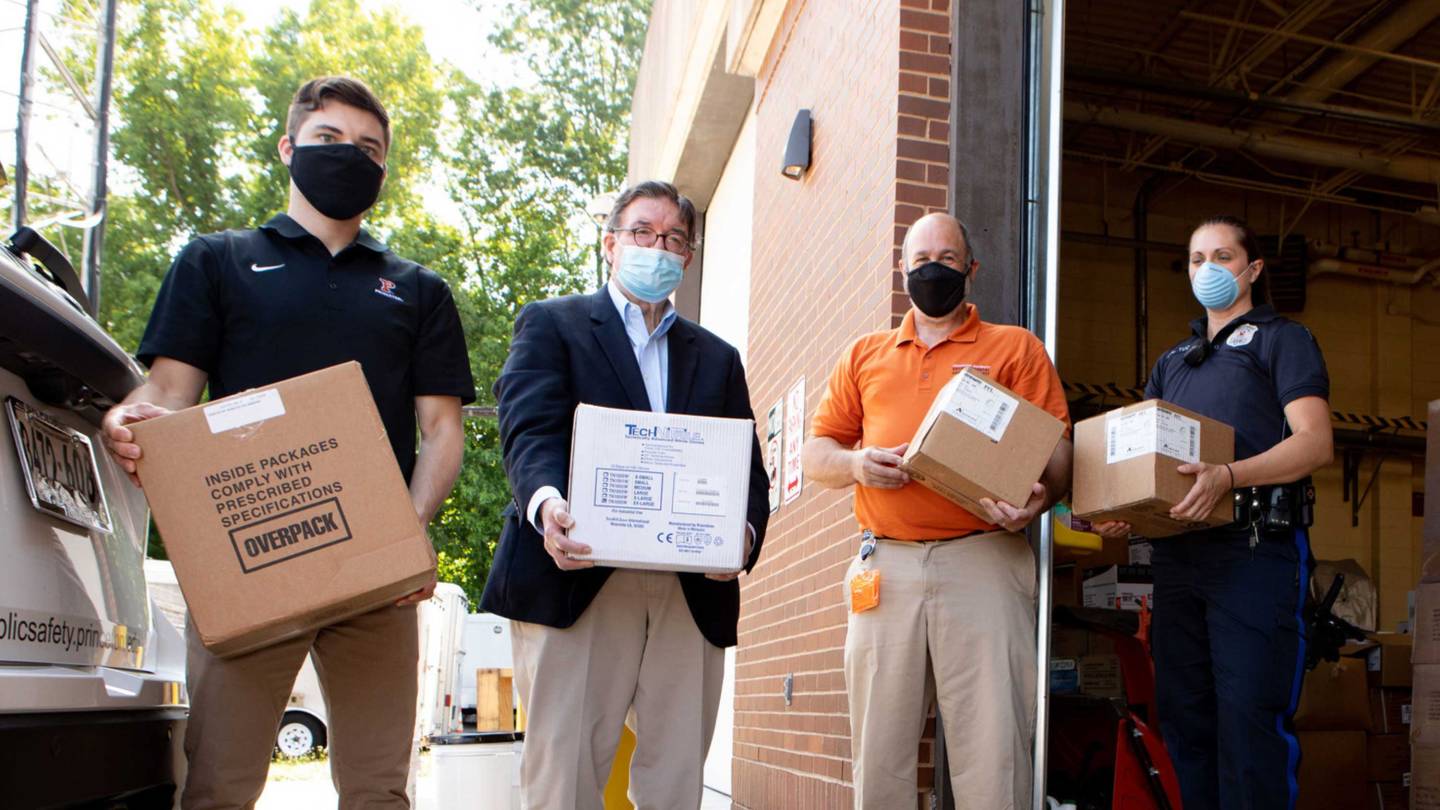 In this file photo from 2020, University staff wear masks as they help distribute University donations of PPE.

It depends, reports a team of Princeton University researchers in new study published Nov. 29 in the Proceedings of the National Academy of Sciences.

“Our results show that interventions such as mask-wearing and social distancing are effective at limiting the spread of respiratory disease,” said lead author Rachel Baker, who recently joined the faculty at Brown University as an assistant professor of epidemiology and environment and society. “However, the strong reductions in cases of endemic diseases, such as RSV and influenza, that we saw during the pandemic may not last if these measures were implemented long-term. It depends on the underlying biology of the disease.”

The authors used epidemic models to explore the impact of a hypothetical longer period of mask-wearing and other NPIs on endemic infections like RSV and the flu. In their models, case numbers of both diseases dropped substantially when masks and social distancing were initially introduced, but after several years, modeled epidemics returned — even if the NPIs were still in use.

“We found that for pathogens with a lower intrinsic transmission rate, such as influenza, these return outbreaks were of reduced epidemic peak size, but for pathogens with a higher intrinsic transmission rate, such as RSV, return outbreaks were of a similar size to the pre-NPI period,” said Baker, who is a 2018 Ph.D. graduate of Princeton who continued her work as a postdoctoral research associate until joining Brown’s faculty.

She and her colleagues also modeled the effect of vaccination. They found that in contrast to NPIs, vaccines did successfully limit the size of return epidemics. “These results speak to the power of vaccination as a tool for limiting infectious disease spread,” Baker said.

The researchers were surprised to find that, absent vaccination, epidemics of flu or RSV could flare up while people were still masking and using other NPIs, said Baker. “The reasoning became clear when we turned to core epidemiological theory,” she said. She and her co-authors modeled different scenarios, and they found that when NPIs are in place for a while, susceptibility to infection increases in the population, increasing the effective transmission rate, until eventually epidemics return.

“The pandemic shows us that effective masking can offer protection and mitigate transmission at the individual level,” said co-senior author Bryan Grenfell, Princeton’s Kathryn Briger and Sarah Fenton Professor of Ecology and Evolutionary Biology (EEB) and Public Affairs. “However, models show that the population consequences of long-term NPIs can be more complex, depending on host-pathogen biology.”

“Susceptible dynamics play a central role in defining longer term outcomes of non-pharmaceutical interventions, emphasizing the value of knowing who is and isn’t susceptible, for example via sero-surveillance,” said the other senior author, C. Jessica Metcalf, an associate professor of EEB and public affairs, who is the co-director of Princeton’s Program in Global Health and Health Policy.

“In particular, vaccination is very powerful since it limits the rise in susceptibles and also alleviates potential negative effects if NPIs are suddenly reduced for social or logistical reasons,” said co-author Chadi Saad-Roy, a 2022 Ph.D. graduate from Princeton who is now a Miller Research Fellow at the University of California-Berkeley.

Additional authors on the paper are Sang Woo Park, a Ph.D. candidate in EEB at Princeton, and Sir Jeremy Farrar, director of the Wellcome Trust.

The current study builds on earlier modeling work by the same team, published in the PNAS in November 2020, predicting a surge in cases of endemic respiratory infections such as RSV once COVID-19 NPI measures were relaxed. In recent weeks, cases of RSV have indeed risen rapidly in many parts of the United States.