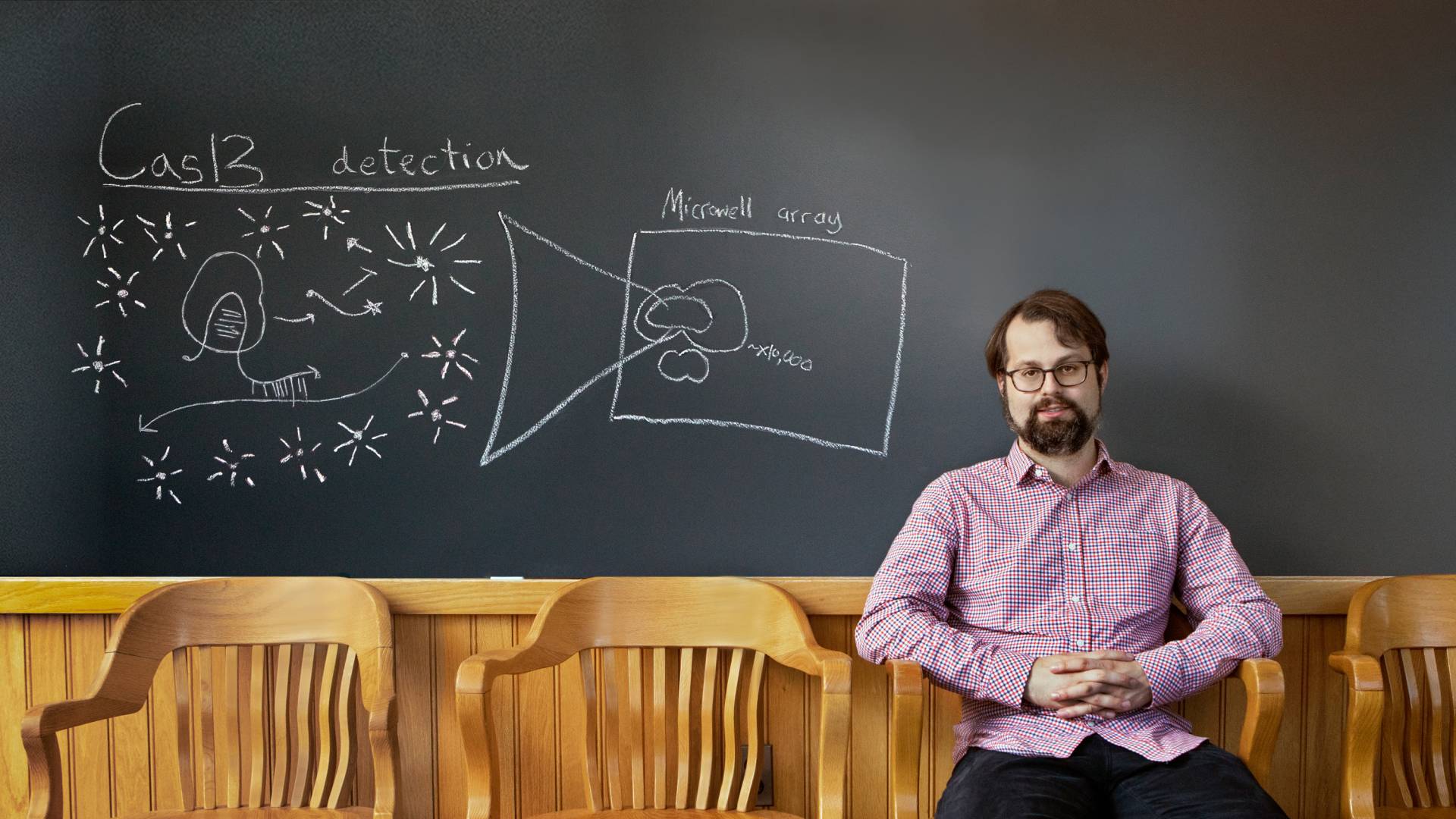 In April 2020, as microbiologist Cameron Myhrvold had just finished his second interview to join Princeton’s faculty, his paper was published in Nature introducing the revolutionary CARMEN system that simultaneously tests for the 170 most prevalent human-infecting viruses — including the then-novel coronavirus. At the time, only 39 of those viruses had FDA-approved diagnostic tests.

Myhrvold, a 2011 alumnus, was working as a postdoctoral researcher at the Broad Institute of MIT and Harvard, where he’d been neck-deep in coronavirus research for years before the pandemic brought his work into global significance.

His fascination with viruses started young, he said. His dad, Nathan Myhrvold, a 1983 Ph.D. alumnus from Princeton, had told him about Ebola. “I was really fascinated by viruses — how they could make us so sick, but they’re so simple, with so few genes,” he said. “And I’ve always had an interest in technology, so I think it was inevitable that there would be a technology component to the work that I was doing.”

In January 2021, Myhrvold joined the department of molecular biology as one of Princeton's newest COVID-19 experts and part of a growing cohort of researchers who straddle the boundary between fundamental research and groundbreaking technological developments. 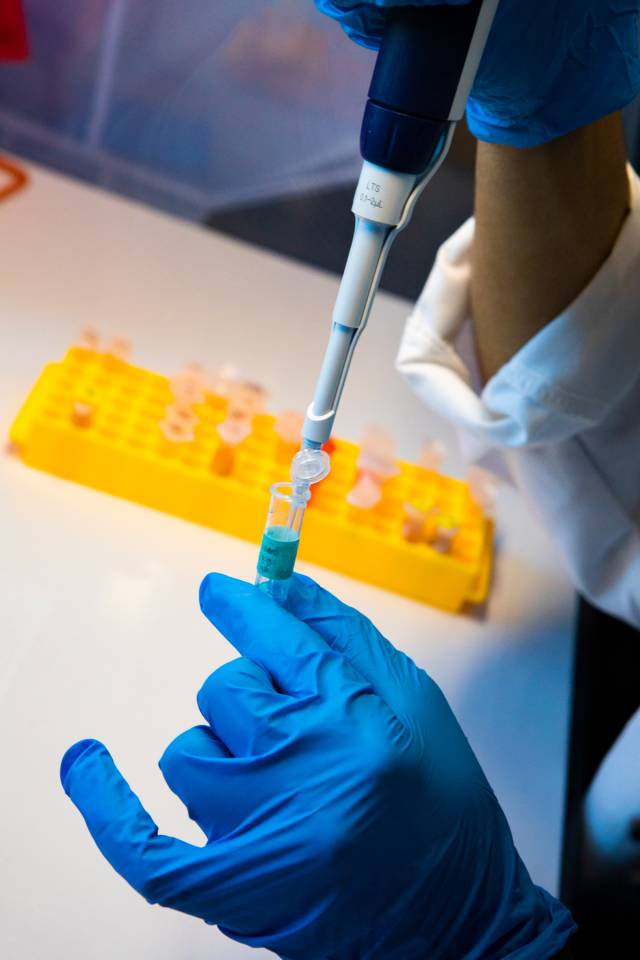 “Cameron uses genome editing technologies to learn about, monitor, diagnose and destroy viral pathogens with pandemic potential,” said Bonnie Bassler, the Squibb Professor in Molecular Biology and chair of the department. “His spectacular new technologies enable him and his collaborators to solve fundamentally important problems of current biomedical urgency.”

A key weapon in his arsenal is CRISPR-Cas13. If that sounds familiar, it’s probably because in 2020, the Nobel Prize in chemistry went to the scientists behind CRISPR-Cas9, a gene-editing tool that allows precise cuts in DNA. Not as much attention has been paid to CRISPR-Cas13, the tool that Myhrvold uses to detect and cleave RNA (DNA’s lesser-known, single-helix cousin).

Myhrvold and others in the field have identified four technologies based on Cas13 that work in slightly different ways. One works like a scalpel, carefully snipping single RNA strands much like Cas9 cuts DNA. Another variant tags RNA strands with other proteins, including a fluorescent protein that can track RNA. A third one uses a protein called ADAR to edit one “letter” at a time in RNA — a very exciting biomedical development, as so many diseases arise from a single letter “misspelled” in the genetic code.

The fourth variant is more like a ninja star than a pair of scissors; it has an “overdrive” mode that can destroy all nearby strands of a harmful RNA. “I often use the analogy of a paper shredder, because you feed in specific things that you want to get destroyed, and then boom, they get thrashed,” said Myhrvold.

Some simple organisms, including many viruses, encode their blueprints in RNA. This means that Myhrvold’s paper-shredding Cas13 application could become an antiviral treatment for diseases including HIV, the common cold, influenza and COVID-19.

“A Cas13-based antiviral medication is still many years away, but that’s definitely an area we’re excited about,” said Myhrvold. “It’s an exciting approach because, as long as we can deliver it to the right parts of your body to be effective, we can eventually treat any virus that’s infecting that part of your body. Maybe the next outbreak is a flu again, like in 1918, or maybe it’s Ebola or something else entirely different. We want to have versatile tools at our disposal.”

Tapping the versatility of RNA

The secret to the versatility is RNA itself. Unlike DNA, which maintains a constant size and shape, RNA occurs in a variety of lengths and shapes, to perform its many roles to build and maintain your body’s various systems.

DNA, the double-helixed strands holding the blueprint for every tiny component of your body and brain, has captivated geneticists for years. But a growing number of biologists are shifting their focus to single-stranded RNA. If DNA is your body’s blueprint, proteins are the contractors and bricklayers and plumbers bringing the blueprint to life. For decades, RNA was seen as a simple translator, delivering the DNA instructions in a form that the proteins can read. Now, scientists are discovering a host of other jobs RNA can perform, including doing the work of some proteins.

“If you look at the last decade or so, we have all these great tools for studying DNA that have been really transformative, including Cas9. I would like to see us say, ‘Let’s do all that again, but at the RNA level,’” said Myhrvold. “And then maybe in a few decades, we’ll be talking about doing this for proteins.”

That technology doesn’t yet exist for proteins, but Myhrvold hints that that may change. His career has been marked by his refusal to be stymied by the limitations of technology; he holds seven patents and has another three pending.

Myhrvold’s lab already has people working on technology development, and he’s looking for students and researchers with wide-ranging expertise to build that out.

“A lot of the best science we do at Princeton is interdisciplinary,” he said. “When I studied here, I was part of the Integrated Science Curriculum, and that has very much shaped how I like to operate as a scientist. I love these interdisciplinary, collaborative projects.” 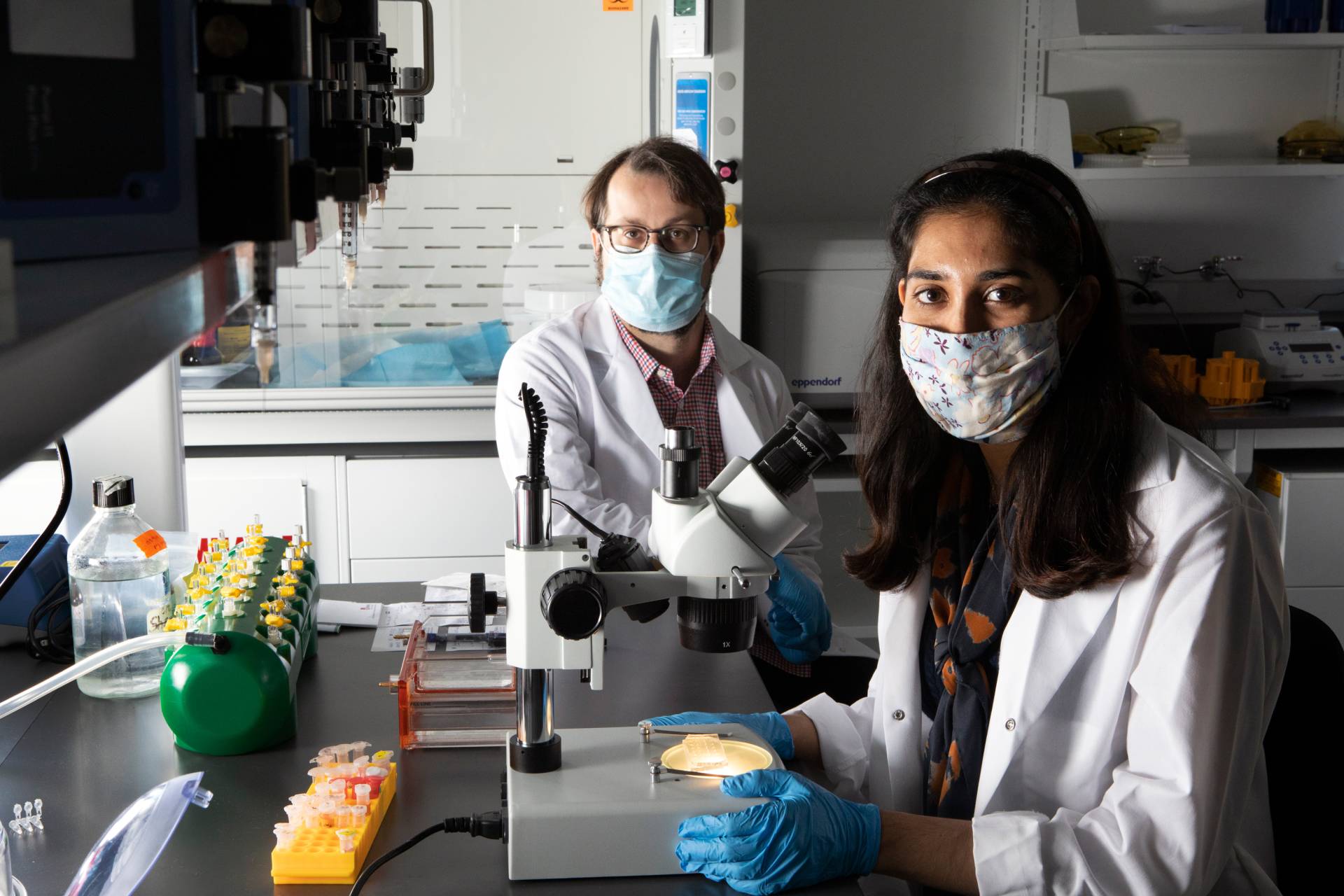 "Cameron is a great mentor," said Shruti Sharma (right), a graduate student in Myhrvold's lab. "You really feel that someone’s there to champion you and help you succeed."

Myhrvold described himself as “super excited” to develop collaborations with his former mentors as well as new faculty within and beyond his departments. He has begun collaborations with two other molecular biology professors — Zemer Gitai, the Edwin Grant Conklin Professor of Biology, and Elizabeth Gavis, the Damon B. Pfeiffer Professor in the Life Sciences — and he is in conversations with several potential research partners from departments and programs across the University. He is co-advising graduate student Shruti Sharma with Antoine Kahn, the vice dean of the School of Engineering and Applied Science and the Stephen C. Macaleer '63 Professor in Engineering and Applied Science.

“Cameron is a great mentor, and you feel confident with his guidance to reach success,” Sharma said. “I appreciate that Cameron is well versed in the physical sciences in addition to the biological sciences. His projects are thus wide-ranging, from understanding new science to designing technology that serves a larger purpose. And I was looking for that. I was thinking, ‘I've studied physics, and I want to apply my knowledge to something more humanitarian.’”

During his own years as a Princeton student, Myhrvold concentrated in molecular biology and completed a certificate in quantitative and computational biology before winning a $250,000, no-strings-attached fellowship from the Fannie and John Hertz Foundation that paid his way to graduate school at Harvard. He then did postdoctoral work at the Broad Institute under the leadership of fellow Princeton alumnus Eric Lander of the Class of 1978, before coming back to Princeton to set up his research lab.

'It's quite a trajectory'

“It makes me very proud — and a little sentimental — that an undergraduate from our department is now my colleague,” said Bassler, the department chair and Myhrvold’s former senior thesis adviser. “No other member of our faculty was an undergraduate here. It's quite a trajectory from when he was learning to pipette in my lab.”

She recalled that when Myhrvold was working on his junior paper and senior thesis with her, “he was always extremely entrepreneurial and creative. And now, a decade later, his portfolio is a remarkably interesting mix of technology development and basic science.”

In many ways, Myhrvold’s research journey is a textbook example of how pure, curiosity-driven science can evolve into something with very specific biomedical applications. “I think that’s always going to be a part of what I do,” he said. “I love the fact that I get to work on so many different basic science questions here, in collaboration with so many amazing people, and I’m also going continue this viral threat work, with its concrete applications, because RNA viruses are such a threat to human health.”

Even after 18 months, he’s still losing sleep over the pandemic, he said. “In so many countries, vaccination is almost nonexistent, and I’m worried that that’s going to come back to bite us in the coming months. So many Americans are acting like COVID is in the rearview mirror, but it’s really not. That mentality is what’s going to allow it to make a comeback. It’s not just the Delta or Lambda variants — it’s the rest of the Greek alphabet that I’m worried about. I think we’re going to run out of Greek letters. And then what? This is a going to be an arms race, and hopefully the world will get to a point where we can make and distribute enough vaccine quickly enough that this will be okay, but I’m worried.”

As he builds the team that will continue this work, Myhrvold is committed to keeping students at the forefront of his lab’s research. “Obviously I’m a little biased, but I love the undergrads here,” Myhrvold said. “I loved doing research as an undergrad, and it’s important to me to always have undergrads as members of the lab in the future. It was a little tricky the first year, especially because of COVID logistics, but it’s already been a lot of fun.”

Christopher Guan of the Class of 2022 was the first undergraduate to join Myhrvold’s lab.

“I first reached out to Cameron because I found his research very interesting and unique,” said Guan. “He gives me an incredible amount of creative freedom in tackling new designs, and he will always choose to guide my thinking rather than dictating a correct approach. I definitely feel like an independent researcher that is always learning in his lab.”

“I gave Chris a very ambitious project,” Myhrvold said. “I thought, ‘If it doesn’t work, it’s not the end of the world, but if it does, I’m really excited to see where it goes.’”

Myhrvold’s Princeton connections reach in several directions. His parents met while they were graduate students at the University — his father was pursuing applied mathematics and his mother was studying romance languages and literature — and as an undergraduate, he was joined by his twin brother Conor in the Class of 2011.