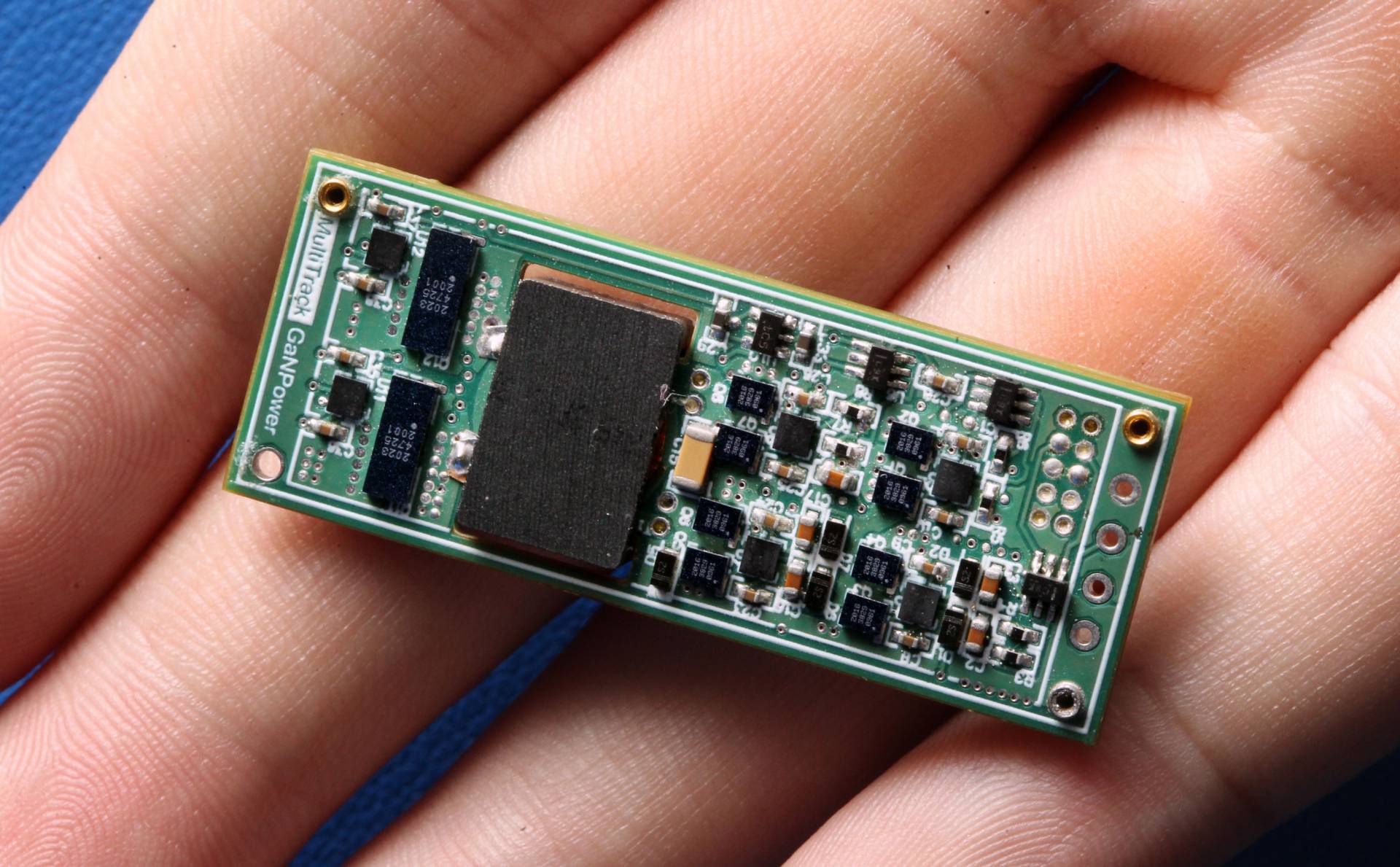 Catalyzing new research with far-reaching potential, the Dean for Research Innovation Funds will go this year to nine projects, including research on devices like this one, which will reduce the energy usage of data centers, computing and power electronics systems.

Nine exploratory projects, from an effort to exploit inter-microbial warfare in the search for new antibiotics to the development of artificial intelligence for the transcription of ancient documents, have been selected to receive support through the Dean for Research Innovation Funds.

The new initiatives, spanning the natural sciences, humanities and collaborations with industry, are in the early stages of investigation — a time when it is typically difficult to find sources of research funding. To kick-start promising ideas, the Dean for Research Innovation Fund, now in its eighth year, provides the fuel that enables research to blaze new trails.

“Bold ideas can sometimes need a champion, someone who is willing to take a chance on funding ideas that have never been tried before, or are new in some way,” said Dean for Research Pablo G. Debenedetti, the Class of 1950 Professor of Engineering and Applied Science and a professor of chemical and biological engineering. “This funding program gives faculty members and their teams that chance.”

The program also presents the opportunity to explore new ideas in the sciences that have the potential to lead to discoveries of tremendous benefit for human health and wellbeing, a facet that attracted philanthropist Frank Richardson, Class of 1961, who was inspired early in life by pioneers who developed vaccines against polio and smallpox.

“Here is a chance to support projects that otherwise might not get off the ground and that have been curated by the best minds at Princeton University,” said Richardson, referring to the fact that a faculty-led committee selects the projects.

Richardson said he was excited to provide opportunities for students working on projects that could benefit society. “So many great insights come from younger people who may not be far enough along in their careers to qualify for federal funding,” Richardson said, “but who have the true possibility of making major breakthroughs.”

Funds have been awarded from three classes of projects: New ideas in the natural sciences, new ideas in the humanities and new industrial collaborations.

New ideas in the natural sciences

This fund supports the exploration of ideas that are at an early stage and need additional investigation prior to becoming the basis of a proposal for funding to an external agency that sponsors research. Five projects have been selected for funding this year:

Listening for the song of dark matter

Like an AM radio searching for a signal, a new tunable device could search for signatures of dark matter in the universe. Despite making up more than 80% of the universe, dark matter has never been directly detected – its presence has only been inferred through its actions on stars and gases in galaxies. Saptarshi Chaudhuri, an associate research scholar and Dicke Fellow, is designing parts for a “dark matter radio” to search for faint signals from dark-matter candidates called QCD axions. Chaudhuri and Lyman Page, the James S. McDonnell Distinguished University Professor in Physics, will build components of a high-quality tuner that can scan a range of frequencies, in a manner analogous to turning a dial on the radio, to detect these elusive particles and solve the mystery of the source of dark matter.

Aiding the search for new antibiotics

A new project will exploit the chemical warfare that microbes wage against other organisms to search for new treatments for bacterial diseases. More than three-quarters of today’s antibiotics, including penicillin, come from natural toxins that microorganisms secrete to protect themselves. The vast majority of such compounds remain unknown. Mohammad Seyedsayamdost, professor of chemistry, and his team have found evidence for the role of oxidative stress, a biochemical process, in promoting the activity of genes responsible for making these natural toxins. The team will explore how oxidative stress can aid the search for new natural toxins that could form the next generation of antibiotic drugs.

Mapping the neurons of working memory

A team will explore how neurons in the brain interact across regions to give rise to the ability to remember a phone number just long enough to punch it into a phone. Storing information in working memory is an everyday occurrence, and research indicates that working memory arises from interactions between two brain regions, one that handle sensory information (the sensory cortex) and another than handles cognitive information (the prefrontal cortex). To understand how neurons communicate across regions, Timothy Buschman, assistant professor of psychology and neuroscience, and his team will record brain activities using tiny silicon-based recording devices known as Neuropixels that capture the outputs of hundreds to thousands of neurons simultaneously. The team will use the recordings to test the hypothesis that working memory relies on the interaction of the prefrontal cortex and the sensory cortex.

A computational approach known as deep learning could enhance the predictions of Antarctic ice dynamics associated with climate change. Sea-level rise occurs due to ice loss in regions such as Antarctica. Scientists’ understanding of how ice flows is based on decades-old laboratory studies, yet this flow law doesn’t capture processes occurring at much larger time scales such as decades and over long distances such as thousands of kilometers. Newer data from satellites could provide more accurate predictions. Ching-Yao Lai, assistant professor of geosciences, will apply an approach called physics-informed deep learning to find the fundamental flow law of ice from satellite data and build better predictions of ice dynamics in a changing climate.

Researchers will develop new, versatile tools to track the movement of RNA, the cell’s messenger delivery system, and to remove selected RNAs from cells. A chemical cousin of DNA, RNA moves about the cell carrying instructions to the precise locations where proteins need to be made. A team led by Cameron Myhrvold, assistant professor of molecular biology and a Class of 2011 alumnus, and Elizabeth Gavis, the Damon B. Pfeiffer Professor in the Life Sciences and professor of molecular biology, will explore where and why RNAs travel. They’ll develop tools based on the CRISPR-Cas13 system, a cousin of the CRISPR DNA-editing technique, that targets RNA to illuminate the locations of many different RNAs in the cell and probe their functions at these locations. The team hopes to uncover roles for transported RNAs in the behavior of cells in a developing embryo.

New ideas in the humanities

Catalyzing scholarship on original theories as well as enduring questions, this fund aims to advance disciplines through support for activities such as conferences, new collaborations and creative work. Two projects will be funded:

Creating a resource for future generations, a team from the Princeton Program in Theater will partner with the organization CLASSIX, a collective of Black theater scholars and artists, to participate in gathering and preserving histories of Black American theaters founded during the Black Arts Movement of the 1960s and 70s. The collaboration with CLASSIX, initiated in 2020-2021 through a Humanities Council Magic Project grant, hopes to collect oral histories of Black theater makers, to preserve and archive plays that have never been published, and to spark more meaningful relationship between theater making and the academy. CLASSIX consists of theater artists and scholars A.J. Muhammed, Arminda Thomas, Awoye Timpo, Brittany Bradford and Dominique Rider. The Princeton team will be led by Jane Cox, senior lecturer in theater in the Lewis Center for the Arts and director of Princeton’s Program in Theater.

Deciphering the past using neural networks

Researchers in Princeton and Paris will unlock the texts of manuscripts stored for centuries in a Cairo synagogue by harnessing the power of neural networks, complex algorithms that mimic the workings of the human brain. Documentary fragments found in a medieval repository known as the Cairo Geniza illuminate the daily lives of Jews and others in the Mediterranean and Indian Ocean basins. Deciphering these documents has, until now, relied on the painstaking work of scholars adept in reading Hebrew, Arabic, and medieval handwriting. Marina Rustow, Director of the Princeton Geniza Lab and the Khedouri A. Zilkha Professor of Jewish Civilization in the Near East, will collaborate with Prof. Daniel Stökl Ben-Ezra and his team at the École Pratique des Hautes Études in developing machine learning models to decipher and transcribe Geniza documents, helping make these texts available to historians and to the wider public.

Industry often plays an essential role in identifying society’s most pressing challenges. This fund supports collaborations between scientists in industry and at Princeton, and it requires a pledge of matching funding from the company in the second year. Two projects have been selected for funding:

A collaboration with EnaChip, a New Jersey-based semiconductor energy startup, aims to shrink the size and improve the energy efficiency of telecommunications, computing and power electronics systems. The expansion of data centers, cloud computing, artificial intelligence and the switch to 5G cellular communications, which draws three times more electricity than 4G networks, is driving massive increases in energy usage. Minjie Chen, assistant professor of electrical and computer engineering and the Andlinger Center for Energy and the Environment, has developed a systematic approach to reduce the size of the electronics delivering power to integrated circuits and microprocessors, and greatly reduce energy loss, enabling more compact and energy efficient systems. Chen will collaborate with EnaChip Inc. to evaluate a new system involving the company’s unique silicon integrated magnetic components and packaging techniques. The collaboration will garner input on how to deploy this new technology from industry partners including Google, Intel, and pSemi Corporation.

Through a collaboration with a leading chemical company, researchers at Princeton will explore a promising mechanism for breaking down long-lived contaminants in wastewater treatment plants.  Per- and polyfluoroalkyl substances (PFAS), which may have human health implications, contain carbon-fluorine bonds, which are some of the strongest chemical bonds in nature. Peter Jaffé, the William L. Knapp '47 Professor of Civil Engineering and a professor of civil and environmental engineering, and his team have recently shown that a species of bacterium can break the carbon-fluorine bond and biodegrade PFAS. PFAS are commonly found in biosolids from domestic and industrial wastewater treatment plants, and removing PFAS from these biosolids would benefit the environment. Jaffe will collaborate with The Chemours Company to investigate conditions under which bacteria can break down PFAS in biosolids.