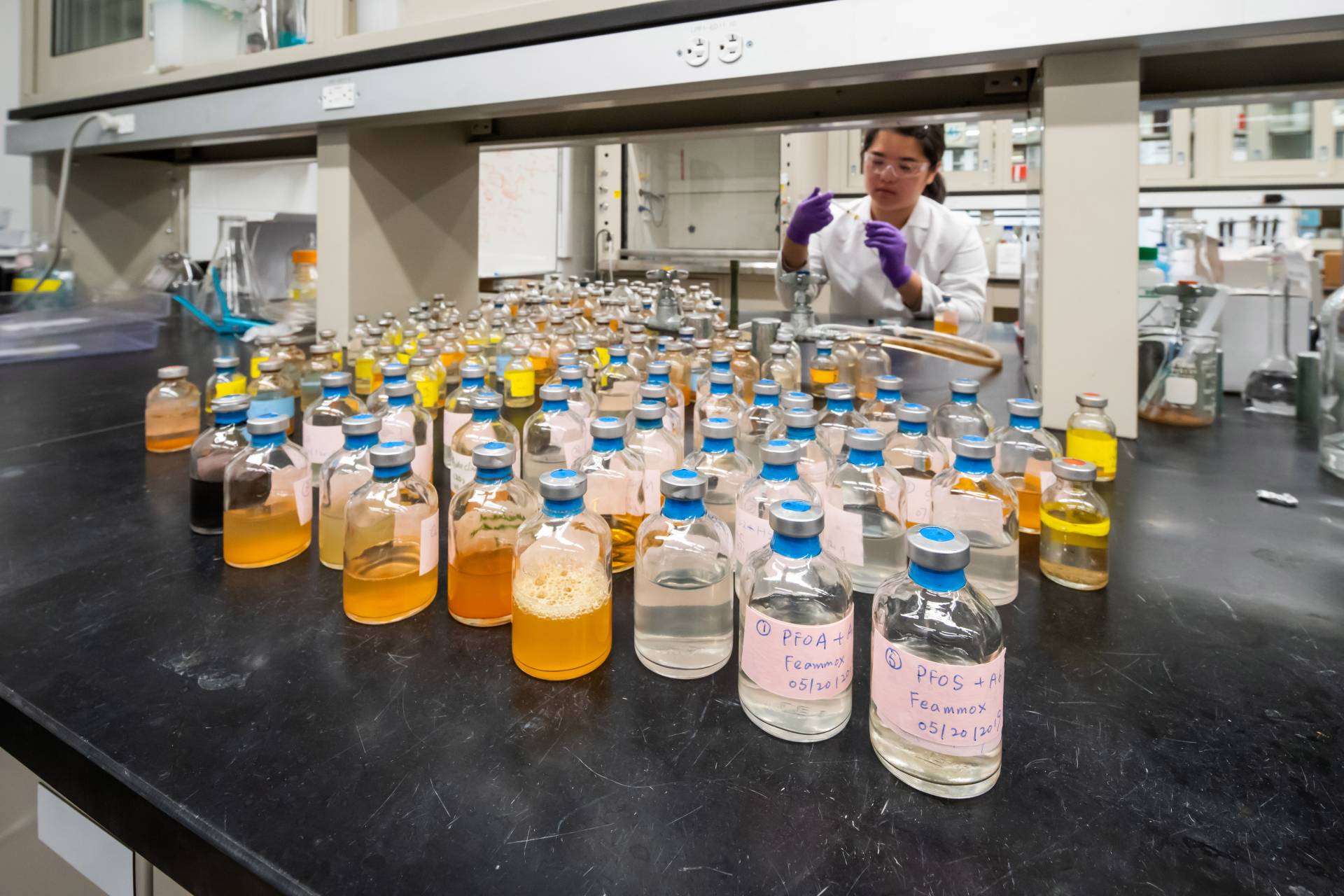 Princeton researchers have found that the Acidimicrobium bacterium A6, was able to remove 60% of a difficult to remediate class of contaminants called PFAS. The researchers tracked the removal of two forms of PFAS — perfluorooctanoic acid (PFOA) and perfluorooctane sulfonate (PFOS) — in lab vials over 100 days of observation.

In a series of lab tests, a relatively common soil bacterium has demonstrated its ability to break down the difficult-to-remove class of pollutants called PFAS, researchers at Princeton University said.

The bacterium, Acidimicrobium bacterium A6, removed 60% of PFAS — specifically perfluorooctanoic acid (PFOA) and perfluorooctane sulfonate (PFOS) — in lab vials over 100 days of observation, the researchers reported in an article in the journal Environmental Science and Technology.

Because of their health concerns and ubiquity, the Environmental Protection Agency recently opened a research effort into the chemicals’ impact on drinking water. Peter Jaffe, the lead researcher and a professor of civil and environmental engineering at Princeton, said the researchers were very encouraged to see these bacteria substantially degrade the famously recalcitrant class of chemicals but cautioned that more work was needed before reaching a workable treatment.

“This is a proof of concept,” said Jaffe, the William L. Knapp '47 Professor of Civil Engineering. “We would like to get the removal higher, and then go and test it in the field.”

PFAS (Per- and polyfluoroalkyl substances) have been widely used in products from non-stick pans to firefighting foam, and the EPA has said there is evidence that exposure to PFAS is harmful to human health. Because of this, U.S. manufacturers have phased out several versions of PFAS in their products. But the substance is long-lived and extremely difficult to remove from soil and groundwater. In recent years, local governments have been seeking ways to reduce the amount of PFAS in water supplies.

Because of the strength of the carbon-fluorine bond, these chemicals are extremely difficult to remove through conventional means. But Jaffe and Shan Huang, an associate research scholar at Princeton, suspected that the Acidimicrobium A6 might be an effective remedy. 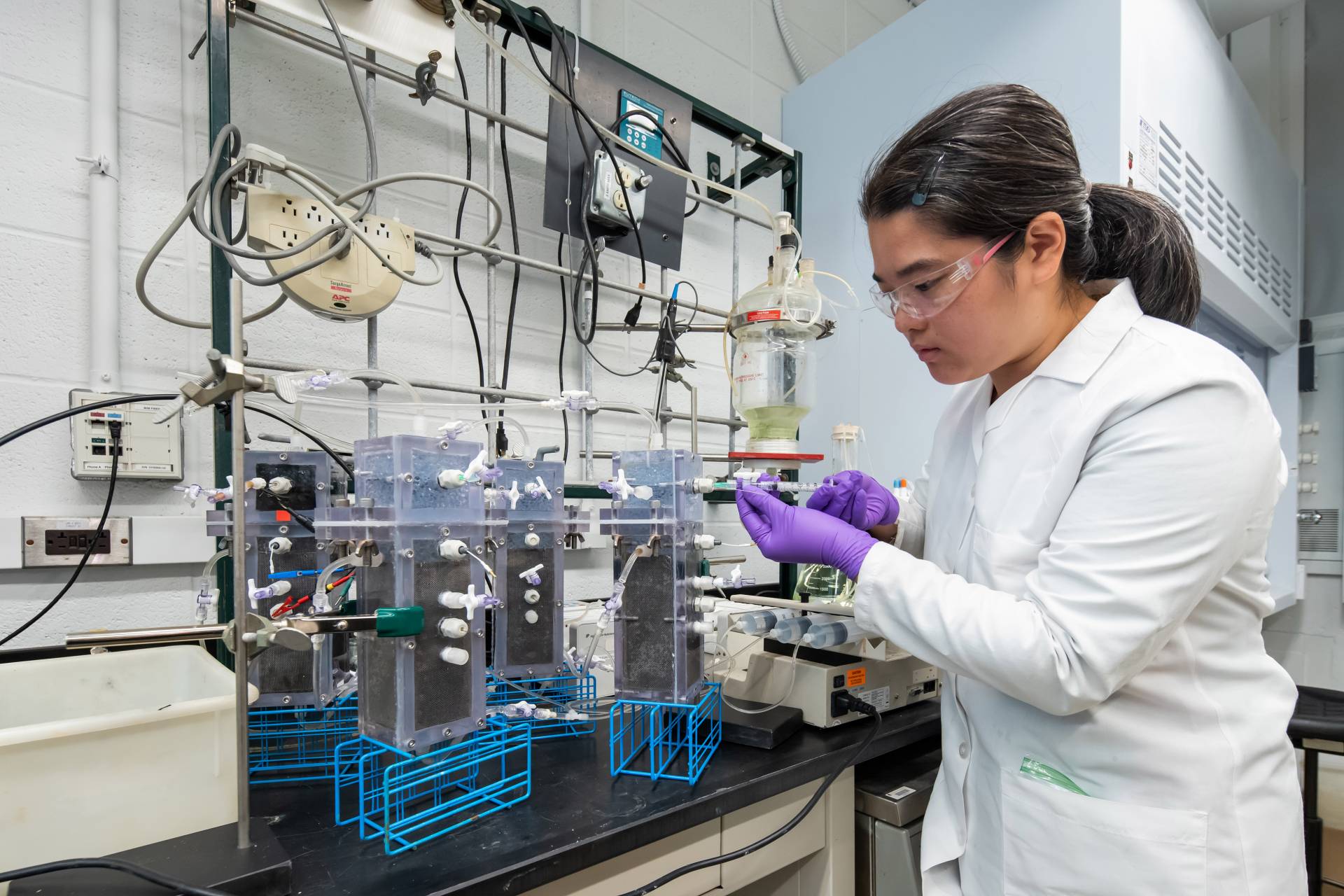 Shan Huang, an associate research scholar at Princeton, with a reactor used to evaluate the bacterium.

The researchers first began working with the bacteria several years ago when they investigated a phenomenon in which ammonium broke down in acidic, iron-rich soils in New Jersey wetlands and similar locations. Because removing ammonium is a critical part of sewage treatment, the researchers wanted to understand what was behind the process, called Feammox. In their initial research in 2013, Jaffe and fellow researchers removed soil samples from the Assunpink wetland outside Trenton. They cultivated the samples in the lab with an eye to identify the microorganisms responsible for the Feammox process. The researchers learned that the Feammox reaction occurred in the presence of Acidimicrobium A6, but it required several years of painstaking work to isolate this organism and grow it as a pure culture.

One challenge in working with Acidimicrobium A6 is the bacterium’s demand for iron both to grow and eliminate compounds like ammonium. Jaffe, along with graduate students Weitao Shuai, a 2019 Maeder Fellow in Energy and the Environment, and Melany Ruiz, now a postdoctoral researcher at Rutgers University, determined that they could substitute an electrical anode for the iron in lab reactors. This allowed the researchers to more easily grow these bacteria and work with them; it also presented a possible way to develop reactors for remediation in the absence of iron.

When they sequenced the Acidimicrobium A6 genome, the researchers noticed certain characteristics that opened the possibility that the bacterium could be effective in removing PFAS.

“We knew this was a big environmental challenge, to find an organism that could degrade these perfluorinated organics,” Jaffe said.

To test their hypothesis, the researchers sealed samples of Acidimicrobium A6 in lab containers and then tested the bacteria’s ability to break down the compounds in lab reactors.

After 100 days, the researchers stopped the test and determined that the bacteria had removed 60% of the contaminants and released an equivalent amount of fluoride in the process. Jaffe said the 100-day period was an arbitrary length of time selected for the experiment, and that longer incubations might result in more PFAS removal. The researchers also plan to vary conditions in the reactor to find the optimum conditions for PFAS removal.

Acidimicrobium A6 thrives in low-oxygen conditions, which makes it particularly effective for soil and groundwater remediation and allows it to function without expensive aeration. However, these bacteria also require iron and acidic soil conditions. Jaffe said this could limit their deployment, but adjusting soil conditions could also allow the bacteria to function in areas that do not naturally meet these requirements. Noting previous work on ammonium reduction by Acidimicrobium A6 in soil columns, constructed wetlands and the electrochemical reactors, Jaffe said the researchers believe this could also be done for PFAS remediation.

Jaffe said the researchers are also working with Mohammad Seyedsayamdost, an associate professor of chemistry, and colleagues in the chemistry department to better understand the enzymes involved in the defluorination process. Characterizing those enzymes could provide insights that increase effectiveness in remediation.

Support for the research was provided in part by the Helen Shipley Hunt Fund.