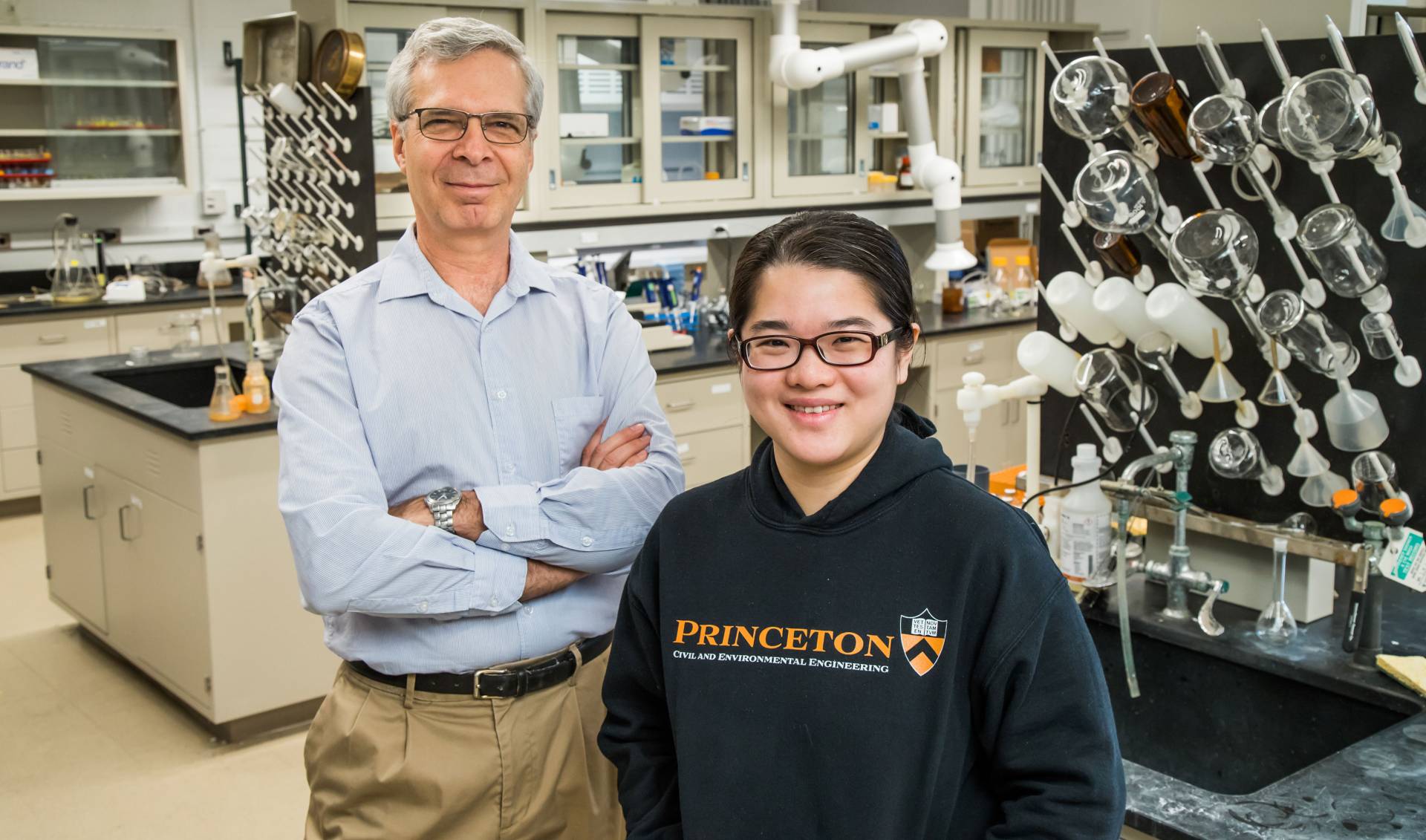 Princeton professor Peter Jaffe and researcher Shan Huang have discovered a bacterium that offers a more efficient way to treat sewage and other pollutants.

Sewage treatment may be an unglamorous job, but bacteria are happy to do it. Sewage plants rely on bacteria to remove environmental toxins from waste so that the processed water can be safely discharged into oceans and rivers.

Now, a bacterium discovered by Princeton researchers in a New Jersey swamp may offer a more efficient method for treating toxins found in sewage, fertilizer runoff and other forms of water pollution.

The bacterium, Acidimicrobiaceae bacterium A6, is capable of breaking down ammonium, a pollutant found in sewage and fertilizer runoff. Even more intriguing is that A6 can perform this chemical conversion in the absence of oxygen, an ability that could be useful for providing alternative methods to costly oxygen-dependent methods currently used in sewage treatment and other processes.

“A great deal of energy is used by machinery that mixes air into wastewater to provide oxygen for breaking down ammonium,” said Peter Jaffe, the William L. Knapp '47 Professor of Civil Engineering at Princeton. “A6 carries out this same reaction anaerobically and might present a more efficient method for treating ammonium and a way to treat other environmental pollutants found in oxygen-poor areas, such as underground aquifers.” 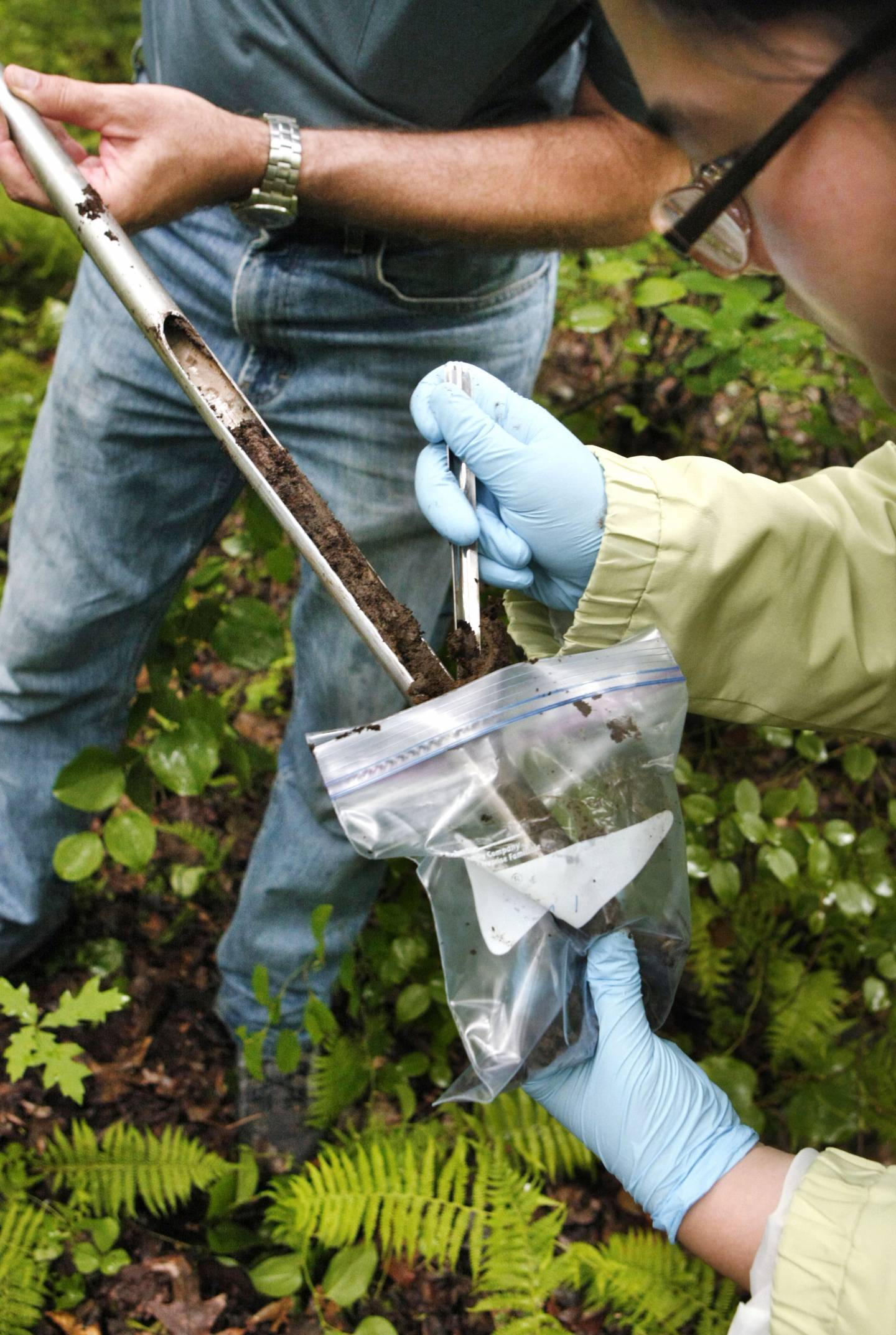 Researchers identified the bacterium in a New Jersey wetland.

Jaffe and his colleague Shan Huang, an associate research scholar in civil and environmental engineering at Princeton, reported the discovery of A6 and its unique abilities on April 11 in the journal PLOS ONE.

Most sewer plants that discharge into oceans or rivers already use bacteria to remove ammonium from waste, but doing so requires churning lots of air into the sludge to feed the bacteria oxygen. The bacteria use the oxygen in a chemical reaction that turns ammonium into nitrite and then other bacteria convert the nitrite to harmless nitrogen gas.

Removing ammonium is important to prevent depletion of oxygen in streams and to prevent eutrophication, the growth of excessive algae and other plants triggered by nitrogen compounds from sewage and agricultural runoff.

An alternative chemical process for breaking down ammonium, known as Feammox, occurs in acidic, iron-rich, wetland environments and soils, and has been found to take place in riparian wetland soils in New Jersey, in tropical rainforest soils in Puerto Rico, in wetland soils in South Carolina, and at various forested and wetland locations in Southern China. It was not clear, however, what enabled the Feammox reaction.

Jaffe and Huang had a hunch that a single bacterium might be at the root of the process in 2015 when studying samples taken from the Assunpink wetland near Trenton, New Jersey. In a study at that time, Jaffe and his colleagues found that the Feammox reaction only took place in the swamp samples when a class of bacteria known as Actinobacteria were present. Among these bacteria, the researchers identified a specific species of bacterium that they dubbed Acidimicrobiaceae bacterium A6 and which they suspected played a key role in the Feammox reaction. They had a hunch that A6 was converting the ammonium to nitrite and common bacteria were handling the conversion of nitrite to nitrogen gas.

However, isolating the bacterium and definitively confirming its role took years of painstaking research. In their new study, the Princeton team mixed soil samples collected from the New Jersey wetland with water and a material containing iron oxide and ammonium and allowed the mixture to incubate in vials for nearly a year.

Mixing the soil samples and the metal medium in the vials was done in an oxygen-free chamber and the vials were sealed air tight to mimic the anaerobic conditions of the wetland soil from which the bacteria originated.

About every two weeks over the course of the year, the scientists removed a small sample from each of the vials to see whether the iron oxide and ammonium were being degraded. When they discovered a sample where this reaction was taking place, they used genetic sequencing to identify the bacterial species present — and definitively found that A6 was carrying out the Feammox reaction.

“Ever since we found that the reaction was taking place in the wetland here in New Jersey, we’ve suspected that a bacterium was doing the heavy lifting,” Jaffe says. “This study confirmed that A6 has this ability, making it the first known species known to carry out the Feammox reaction.”

The Princeton team is exploring how to build a reactor where A6 could be used to process ammonium at industrial scales. One challenge is that the bacteria consume a great deal of iron to carry out the process, which would make it too costly as a method to replace aeration. To get around this problem, the researchers are experimenting with applying a small electrical potential between two electrodes inserted into the reactor’s liquid in a device they dubbed a “microbial electrolysis cell.” The electrodes can then take the role that iron was taking in the Feammox reaction.

The Princeton team is working with the Chinese environmental ministry to develop a prototype reactor to reduce ammonium and heavy metals in wastewater. They are exploring whether the technology could help counter eutrophication, where excessive nutrients in runoff damage rivers, lakes and coastlines.

The researchers also found that while oxidizing ammonium, the A6 bacterium is also capable of simultaneously removing trichloroethylene and tetrachloroethylene, two hard-to-treat pollutants often found at polluted sites. The bacterium was also to transfer electrons to other compounds than iron such as uranium and copper.  In the case of uranium, transforming it into a form that is not soluble in water.

“Because it doesn’t require oxygen, A6 could survive in places that other bacteria might not, such as in contaminated groundwater,” Jaffe said. “Combine that with its versatility in remediating various pollutants and it could become a very important tool for addressing a range of environmental problems.”

Support for the project was provided in part by the National Science Foundation and Princeton’s Project X Fund, a fund to support unconventional research.

“Funding by Project X, which is meant to fund high risk projects, made this work possible and has allowed our laboratory to pursue new and exciting research directions and now more traditional funding mechanisms,” Jaffe said.