After more than a decade of inquiry, a Princeton-led team of scientists has turned the tables on a long-standing controversy to re-establish an old truth about nitrogen mixing in the oceans.

For decades, scientists thought they had a handle on the workings of an intricate natural mechanism known as the nitrogen cycle, essential to maintaining life on Earth. This process, one of nature's most elegant sleights-of-hand, shuttles nitrogen from the soils to the oceans to the atmosphere and back.

A key part of that cycle, researchers once thought, was a process known as denitrification. In low-oxygen -- or anaerobic -- conditions seen in large stretches of ocean sediments and in a few important regions of the open ocean, bacteria act as "denitrifyers," performing the crucial task of gobbling up nitrates and converting them to nitrogen gases, which complete the cycle by flowing back to the atmosphere.

In 1995, a group of Dutch scientists who had been studying the cycling of nitrogen through wastewater treatment plants came up with a startling conclusion. A new process, which they called anaerobic oxidation or "anammox" and that involved different bacteria, was the real player in removing nitrogen in low-oxygen environments, they said. They found the process worked to break down materials in sewage, and they confirmed that the mechanism also was operating in low-oxygen marine environments. They went so far as to suggest that the nitrogen cycle for oceans needed to be revised, as denitrification, according to their inquiry, did not play the major role that had been thought.

The notion was controversial and did not sit well with some scientists.

Now, a research team, led by Bess Ward, the William J. Sinclair Professor of Geosciences at Princeton University, writing in the Sept. 3 issue of Nature, is presenting data that could re-establish denitrification as the main actor in returning nitrogen to the air. After traveling through some of the key low-oxygen sites of the world's oceans, the team has found the telltale chemical signatures proving that denitrification and not anammox is the pivotal process at work most of the time. 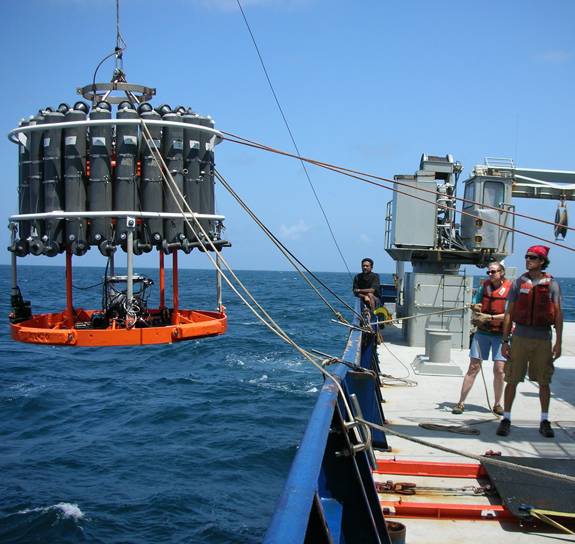 From left, Amal Jayakumar and Bess Ward of Princeton University, and Dave Langner, a marine technician, collect water samples from the Arabian Sea for their study of the nitrogen cycle. They deployed the instrument package from aboard the Scripps Institution of Oceanography's ship, the R/V Roger Revelle. (Photo: Courtesy of the Ward Laboratory)

"In our paper, we report that in the world's largest anoxic marine ecosystem -- the low-oxygen waters of the Arabian Sea -- denitrification rather than anammox is the dominant process," said Ward, who is also chair of the Department of Geosciences at Princeton. "If denitrification is important in the Arabian Sea, then it is important on a global scale, and the nitrogen cycle must be evaluated in that light."

The work, according to a leading expert in the marine nitrogen cycle, confirms his own observations of seawater processes showing that denitrification is key and indicates that the current mainstream view in science may be based on a false impression. "My suspicions that future work would, once again, demonstrate the importance of conventional denitrification have now been confirmed," said Louis A. Codispoti, an oceanographer and research professor at Horn Point Laboratory, part of the University of Maryland in Cambridge, who was not involved with the research.

The researchers who discovered the anammox process nearly 15 years ago, led by Gifjs Kuenen, then at the Delft University of Technology in the Netherlands, moved beyond the original discovery in wastewater treatment plants and found the reaction was also at work in removing nitrogen in a few regions of the ocean known as "oxygen minimum zones." Zeroing in on a low-oxygen zone off the coast of Peru, the work of Dutch, Danish and German scientists found that anammox reactions, rather than denitrification, were operating there.

"That was astounding," Ward remembered.

Thinking there may be a problem with the methodology or that scientists didn't understand the nitrogen cycle as much as they thought they did, she began to devise experiments to seek answers.

Working with other members of her team over the next decade, they learned the methods of the European experts and started to plan to replicate the studies. In 2005, they confirmed that bacteria supporting the anammox reaction dominated the removal of nitrogen in a low-oxygen region off the Peru coast. But when they took samples of water in the Arabian Sea, they found just the opposite -- denitrification was a major force there. The European researchers had found anammox in the Peru system but had never reported on the Arabian Sea.

The notion that microbial processes can vary in low-oxygen zones around the world is startling and important to know, the researchers said.

"We care because nitrogen is a key limiting nutrient to primary productivity," said Jeremy Rich, a former postdoctoral fellow in Ward's lab and now an assistant professor of environmental studies at Brown University, who contributed to the study. "We already knew these zones removed nitrogen, but now that we know the actual processes taking place, we'll be in a much better position to predict how these zones change. And how these zones change will in turn influence primary productivity."

The findings have forced the scientists to re-evaluate what they already knew.

"This made us think -- this means the Arabian Sea is somehow different from the Peru system," Ward said. "Previously, we thought they were the same. Clearly, something was different and that, in and of itself, is an important insight. And, clearly, denitrification is important -- you cannot rewrite the nitrogen cycle."

Because the Arabian Sea is the world's largest anoxic marine ecosystem, that body's most dominant process is almost certainly the primary way for nitrogen to be removed from the world's oceans.

To confirm the conclusions, the team designed a new way of sampling and identifying chemicals and repeated the experiments. The results were the same.

The nitrogen cycle is one of the most important nutrient cycles in nature, providing a transformative process in which nitrogen is taken from the atmosphere and converted into a form that can be consumed by plants. Nitrogen makes up about 80 percent of the earth's atmosphere. It is used by living organisms to produce a number of complex organic molecules, including DNA.

Processing or fixation is necessary to convert gaseous nitrogen into forms usable by living organisms. Most is done by bacteria that possess a nitrogenase enzyme that combines gaseous nitrogen with hydrogen to produce ammonia, which is then converted by the bacteria to make their own organic compounds.