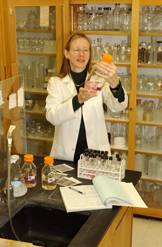 Bess Ward is studying the role bacteria play in the nitrogen cycle, looking specifically at the effects of pollution on the Earth’s delicate nitrogen balance. (photo by Denise Applewhite)

A rock props open the door to Bess Ward’s office on the second floor of Guyot Hall in Princeton’s Department of Geosciences. It’s a nod to the department’s acclaimed tradition of geophysics, plate tectonics and “hard rock stuff,” as Ward put it, although rocks play only a secondary role in her research.

Ward is a biogeochemist, which is a big-picture way of saying that she does a little bit of everything — biology, geology and chemistry, especially as they relate to the world’s oceans. She studies the nitrogen cycle, the biological and chemical shuffle of nitrogen from soils to oceans to atmosphere and back again.

Key to this movement is a host of microorganisms, particularly bacteria or “bugs,” as Ward calls them, that play a starring role in the smooth transition from one form of nitrogen to another. Understanding the bacteria’s role in the nitrogen cycle is critical to unraveling the impact of human activity on the planet’s delicate nitrogen balance.

In an attempt to better understand which bugs do what where, Ward has collected them from waters all over the world, from Chesapeake Bay to the Arabian Sea, the Gulf of Alaska to Antarctica. Beginning 14 years ago, she has studied Lake Bonney, a double-lobed, permanently ice-covered lake in the Dry Valleys of East Antarctica.

“This lake has some very weird chemistry going on in it, and we think it’s the bacteria. There’s something keeping the bacteria from doing their natural thing,” Ward explained.

The bacteria in question are denitrifiers, and their normal function is to suck up all the nitrogen in the water and “make it go away” by converting it to a benign form of nitrogen gas that constitutes 70 percent of the atmosphere. But that’s not happening at Lake Bonney, at least not in the east lobe of the lake. For the denitrifiers in the west lobe, however, it’s business as usual. Ward is trying to figure out why the two lobes tell such different stories. 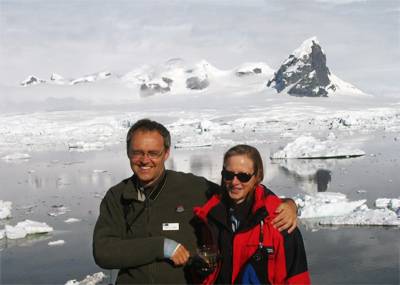 The beauty of Lake Bonney is that it’s a contained system, a laboratory of sorts, with an ice cap that keeps gas from escaping and two lobes that look identical, but behave quite differently biochemically. “If we can figure out what controls denitrification in this little system, maybe we’ll learn something fundamental about the process,” Ward said.

While her research is basic science — “We’re not going to reverse global warming or save the world” — the processes Ward studies are ubiquitous and have economic importance. “There are a lot of practical applications for the bugs,” Ward said.

As a natural byproduct of waste — from plants and animals, to sewage and landfills — nitrogen takes on many forms. In the right forms, it provides nourishment for plants (nitrogen fertilizers boost crop yields) and is a building block of proteins, which ensure the smooth functioning of all cells. But in the wrong forms, it can be trouble, creating smog and acid rain. For eons, nature has maintained this delicate balance.

Certain bacteria are critical. Playing the role of mediator, they maintain equilibrium among nitrogen’s different forms. In the soil and in most bodies of water, nitrogen fixing bacteria take nitrogen from the atmosphere and transform it into forms that nourish plants and animals. Plants and animals generate another form of nitrogen, ammonium, which nitrifying bacteria transform into nitrate. Finally, denitrifying bacteria complete the loop by removing nitrate from ecosystems, turning it into gas and releasing it back to the atmosphere.

These bacteria carry out the most important reactions that regulate the supply and removal of nitrogen in biological systems. The problem is that scientists fear that the bacteria aren’t keeping up.

Within the last century, humans have contributed unprecedented amounts of nitrogen to the biosphere by burning fossil fuels, dumping untreated sewage and using nitrogen fertilizers in large-scale agriculture. This has led to higher concentrations of nitrous oxide, a nitrogen-based greenhouse gas, and contributes to nitrogen-related algal blooms and fish kills in coastal ecosystems. With such a large influx of man-made nitrogen, the Earth’s nitrogen system is dangerously off kilter.

Fundamental to Ward’s research is developing an understanding of the effects of pollution on the bacteria. By understanding how the diversity of bugs in one body of water compares to that of another body and monitoring how each reacts to pollution, she’s hoping to answer such questions as: Does “healthier” water contain different bugs from polluted water? And can scientists put that knowledge to use to restore balance?

“Bess’ questions are dynamic; the way she looks at systems is often very fresh. She’s been advancing this field since her days as a graduate student,” said Mary Voytek, an environmental microbiologist with the U.S. Geological Survey, who is Ward’s former doctoral student and ongoing collaborator. Ward is a leading researcher in her field, Voytek said. “She’s interested in important scientific questions and completely open to pulling in whatever technique or collaborator she needs to get at an answer,” she added.

From beaches to bugs

Ward didn’t set out to study bacteria. She became interested in marine work mostly because it represented a departure from her surroundings growing up in east central Alabama. “I think it was probably a form of escape,” she said. “What could be further [from home] than the ocean?” Her interest in science, however, comes naturally: Both her parents are chemists who taught at Auburn University throughout Ward’s childhood.

She began her studies closer to the Great Lakes than an ocean — she earned a bachelor’s degree in zoology from Michigan State University. In the late 1970s and early 1980s, when Ward was working on her Ph.D. in biological oceanography at the University of Washington in Seattle, it became clear to researchers that bacteria were the ocean’s chemists. “That was a natural juxtaposition,” Ward said, leading her into the study of how bacteria influence the ocean’s nitrogen cycle.

For the past two decades, Ward’s career has moved largely in tandem with that of her partner, Geoffrey Vallis, an oceanographer studying the large-scale circulation of the atmosphere and ocean and the complex interactions between the two. Keeping academic couples together is a challenge facing higher education today, she said. “We’ve been really lucky.”

Both held positions at Scripps Institution of Oceanography at the University of California-San Diego before moving to the University of California-Santa Cruz in 1989, where Ward became chair of the ocean sciences department in 1995. In 1998, they were both offered positions in Princeton: Ward in the University’s Department of Geosciences and Vallis at the National Oceanic and Atmospheric Administration’s Geophysical Fluid Dynamics Laboratory, which is affiliated with Princeton through the graduate program in atmospheric and oceanic sciences.

How Ward came to reside in the geosciences department is largely a testament to its “immense prescience” in the late ’90s in realizing that the environmental geosciences, including oceanography, biogeochemistry and isotope geochemistry, were going to play an increasing role in the future of the geosciences, she said. This led the department to branch out by hiring scientists who could help answer some of the exciting intellectual questions at the interface of biology and geology.

“She’s definitely one of the most valuable members of our department. We’re a very diverse department, and she’s the most biologically-oriented member,” said Tony Dahlen, chair of the Department of Geosciences. “We’re very pleased to have her here and certainly pleased to have been able to attract her from Santa Cruz, where she had a real ocean next door.”

Ward is now the William J. Sinclair Professor of Geosciences, a professor of ecology and evolutionary biology and the director of Princeton’s Program in Environmental Studies. She supervises two graduate students and a cadre of postdoctoral researchers.

Voytek described her as an inspirational mentor who is not afraid of new techniques and who encourages her students to explore all possibilities, not limiting them to the current ways of thinking about a subject. “Anyone who spends time with her hopes to pattern their own career after hers, ” Voytek said. “She’s really set an incredible example.”

Ward also teaches a core course, “Environmental Science, Policy and Management,” in the environmental sciences curriculum along with two advanced undergraduate courses in environmental microbiology and biological oceanography in the Department of Geosciences. She enjoys integrating aspects of her research with teaching. “That always makes the subject come alive to the students,” she said. She puts a lot of effort into her teaching, Dahlen said, and it shows. “[Her classes] just get fabulous reviews,” he said. “She’s definitely one of our best teachers.”

Back to the ice?

Funding for Ward’s Lake Bonney research is coming to an end, and she returned in February from her final voyage to Antarctica. Has she formulated any theories about the bacteria in Lake Bonney’s twin lobes? “I think they’re just pickled,” she said.

The concentration of salt in the eastern lobe is high enough to be toxic to most organisms. Ward’s bacteria aren’t quite dead, they can be resuscitated ever-so-slightly under laboratory conditions, but they’re not really alive either, she said. “It’s been a real mystery; it’s kept us intrigued for a long time. I’m coming to the conclusion that it isn’t anything that’s specific to this nitrogen process; it’s more a critical level of toxicity,” she explained.

One mystery may be solved, but a new one revealed: How did the east lobe get so salty? While the salt question may not be compelling enough to entice her to travel to the end of the Earth again, one more especially intriguing bug she’s found could just lure her back to Lake Bonney’s wind-blasted shore. Eyes flashing, she said, “[To trace] a specific organism, one that we know is important, in a weird system like that might be really cool!”