When the landmass that is now the Indian subcontinent slammed into Asia about 50 million years ago, the collision changed the configuration of the continents, the landscape, global climate and more. Now a team of Princeton University scientists has identified one more effect: the oxygen in the world’s oceans increased, altering the conditions for life.

“These results are different from anything people have previously seen,” said Emma Kast, a graduate student in geosciences and the lead author on a paper coming out in Science on April 26. “The magnitude of the reconstructed change took us by surprise.” 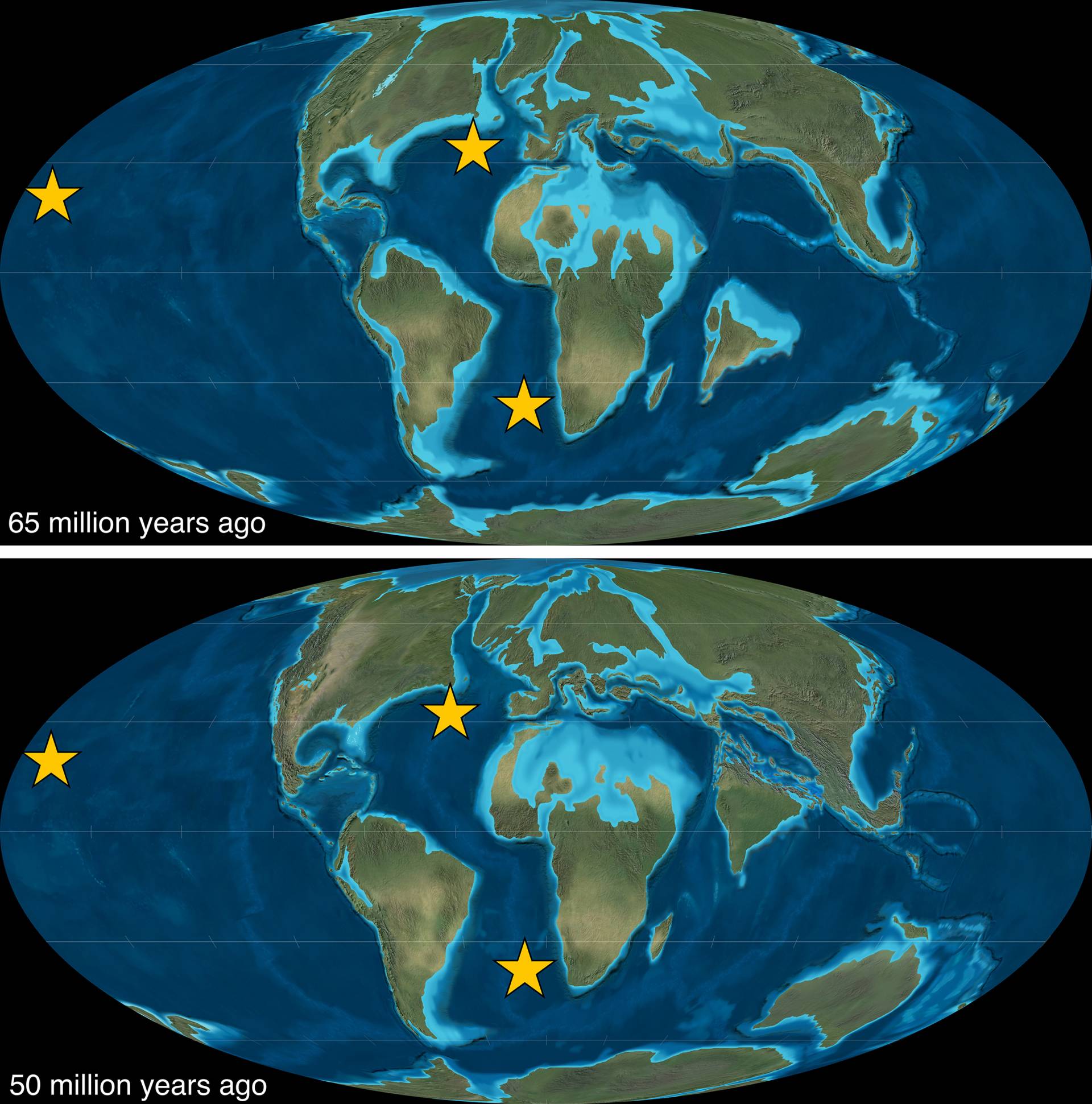 Neither the continents nor the oceans have always looked the way they do now. These "paleomaps" show how the continents and oceans appeared before (top) and during (bottom) "the collision that changed the world," when the landmass that is now the Indian subcontinent rammed northward into Asia, closing the Tethys Sea and building the Himalayas. Global ocean levels were higher then, creating salty shallow seas (pale blue) that covered much of North Africa and parts of each of the continents. A team of Princeton researchers, using samples gathered at the three starred locations, created an unprecedented record of ocean nitrogen and oxygen levels from 70 million years ago through 30 million years ago that shows a major shift in ocean chemistry after the India-Asia collision. Another shift came 35 million years ago, when Antarctica began accumulating ice and global sea levels fell.

Kast used microscopic seashells to create a record of ocean nitrogen over a period from 70 million years ago — shortly before the extinction of the dinosaurs — until 30 million years ago. This record is an enormous contribution to the field of global climate studies, said John Higgins, an associate professor of geosciences at Princeton and a co-author on the paper.

“In our field, there are records that you look at as fundamental, that need to be explained by any sort of hypothesis that wants to make biogeochemical connections,” Higgins said. “Those are few and far between, in part because it’s very hard to create records that go far back in time. Fifty-million-year-old rocks don’t willingly give up their secrets. I would certainly consider Emma’s record to be one of those fundamental records. From now on, people who want to engage with how the Earth has changed over the last 70 million years will have to engage with Emma’s data.”

In addition to being the most abundant gas in the atmosphere, nitrogen is key to all life on Earth. “I study nitrogen so that I can study the global environment,” said Daniel Sigman, Princeton’s Dusenbury Professor of Geological and Geophysical Sciences and the senior author on the paper. Sigman initiated this project with Higgins and then-Princeton postdoctoral researcher Daniel Stolper, who is now an assistant professor of Earth and planetary science at the University of California-Berkeley.

Every organism on Earth requires “fixed” nitrogen — sometimes called “biologically available nitrogen.” Nitrogen makes up 78% of our planet’s atmosphere, but few organisms can “fix” it by converting the gas into a biologically useful form. In the oceans, cyanobacteria in surface waters fix nitrogen for all other ocean life. As the cyanobacteria and other creatures die and sink downward, they decompose.

Nitrogen has two stable isotopes, 15N and 14N. In oxygen-poor waters, decomposition uses up “fixed” nitrogen. This occurs with a slight preference for the lighter nitrogen isotope, 14N, so the ocean’s 15N-to-14N ratio reflects its oxygen levels.

That ratio is incorporated into tiny sea creatures called foraminifera during their lives, and then preserved in their shells when they die. By analyzing their fossils — collected by the Ocean Drilling Program from the North Atlantic, North Pacific, and South Atlantic — Kast and her colleagues were able to reconstruct the 15N-to-14N ratio of the ancient ocean, and therefore identify past changes in oxygen levels.

Oxygen controls the distribution of marine organisms, with oxygen-poor waters being bad for most ocean life. Many past climate warming events caused decreases in ocean oxygen that limited the habitats of sea creatures, from microscopic plankton to the fish and whales that feed on them. Scientists trying to predict the impact of current and future global warming have warned that low levels of ocean oxygen could decimate marine ecosystems, including important fish populations.

When the researchers assembled their unprecedented geologic record of ocean nitrogen, they found that in the 10 million years after dinosaurs went extinct, the 15N-to-14N ratio was high, suggesting that ocean oxygen levels were low. They first thought that the warm climate of the time was responsible, as oxygen is less soluble in warmer water. But the timing told another story: the change to higher ocean oxygen occurred around 55 million years ago, during a time of continuously warm climate.

“Contrary to our first expectations, global climate was not the primary cause of this change in ocean oxygen and nitrogen cycling,” Kast said. The more likely culprit? Plate tectonics. The collision of India with Asia — dubbed “the collision that changed the world” by legendary geoscientist Wally Broecker, a founder of modern climate research — closed off an ancient sea called the Tethys, disturbing the continental shelves and their connections with the open ocean.

“Over millions of years, tectonic changes have the potential to have massive effects on ocean circulation,” said Sigman. But that doesn’t mean climate change can be discounted, he added. “On timescales of years to millenia, climate has the upper hand.”