Researchers from Princeton University and the Swiss Federal Institute of Techonology in Zurich have confirmed that during the last ice age iron fertilization caused plankton to thrive in a region of the Southern Ocean.

The study published in Science confirms a longstanding hypothesis that wind-borne dust carried iron to the region of the globe north of Antarctica, driving plankton growth and eventually leading to the removal of carbon dioxide from the atmosphere.

Plankton remove the greenhouse gas carbon dioxide (CO2) from the atmosphere during growth and transfer it to the deep ocean when their remains sink to the bottom. Iron fertilization has previously been suggested as a possible cause of the lower CO2 levels that occur during ice ages. These decreases in atmospheric CO2 are believed to have "amplified" the ice ages, making them much colder, with some scientists believing that there would have been no ice ages at all without the CO2 depletion.

Iron fertilization has also been suggested as one way to draw down the rising levels of CO2 associated with the burning of fossil fuels. Improved understanding of the drivers of ocean carbon storage could lead to better predictions of how the rise in manmade carbon dioxide will affect climate in the coming years.

The role of iron in storing carbon dioxide during ice ages was first proposed in 1990 by the late John Martin, an oceanographer at Moss Landing Marine Laboratories in California who made the landmark discovery that iron limits plankton growth in large regions of the modern ocean. 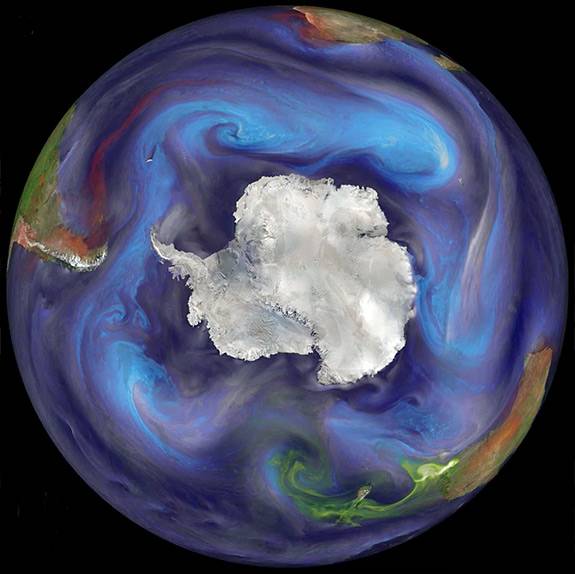 A team of researchers led by scientists at Princeton University and ETH Zurich have confirmed that dust brought iron to the Subantarctic zone in the northern part of the Southern Ocean. This region lies in the path of the winds that blow off South America, South Africa and Australia. During the last ice age, an increase in the supply of dust to the Subantarctic region fertilized the ocean, stimulating marine productivity and causing nitrogen to be drawn down to low levels. The associated increase in the efficiency of carbon sequestration into the deep ocean can explain part of the atmospheric CO2 decrease observed during the last ice age. The image shows the emission and transport of dust and other important aerosols to the Southern Ocean on Dec. 30, 2006. Dust is represented with orange to red colors, sea salt with blue, organic and black carbon with green to yellow, and sulfates with ash brown to white. In the image, a plume of dust has been emitted from southern South America and is being transported eastward over the Subantarctic Atlantic Ocean. (Image courtesy of William Putnam and Arlindo da Silva, NASA/Goddard Space Flight Center)

Based on evidence that there was more dust in the atmosphere during the ice ages, Martin hypothesized that this increased dust supply to the Southern Ocean allowed plankton to grow more rapidly, sending more of their biomass into the deep ocean and removing CO2 from the atmosphere. Martin focused on the Southern Ocean because its surface waters contain the nutrients nitrogen and phosphorus in abundance, allowing plankton to be fertilized by iron without running low on these necessary nutrients.

The research confirms Martin's hypothesis, said Daniel Sigman, Princeton's Dusenbury Professor of Geological and Geophysical Sciences, and a co-leader of the study. "I was an undergraduate when Martin published his 'ice age iron hypothesis'," he said. "I remember being captivated by it, as was everyone else at the time. But I also remember thinking that Martin would have to be the luckiest person in the world to pose such a simple, beautiful explanation for the ice age CO2 paradox and then turn out to be right about it."

Nitrogen is a critical building block for marine algae, yet the plankton in the Southern Ocean north of Antarctica leave much of it unused partly because they lack another needed nutrient, iron. The late John Martin hypothesized that dust-borne iron carried to the region by winds during ice ages may have fertilized the marine algae, allowing more of the Southern Ocean nitrogen to be used for growth and thus drawing CO2 into the ocean. To confirm Martin's hypothesis, the researchers measured isotopes of nitrogen in a sediment sample collected from a site that lies within the path of the winds that deposit iron-laden dust in the Subantarctic zone of the Southern Ocean (labeled ODP Site 1090). They found that the ratios of the types of nitrogen in the sample coincided with the predictions of Martin's hypothesis. The colors indicate simulated ice-age dust deposition from low to high (blue to red). The black contour lines show the concentrations of nitrate (a form of nitrogen) in modern surface waters. (Image courtesy of Alfredo Martínez-García of ETH Zurich and Science/AAAS)

Previous efforts to test Martin's hypothesis established a strong correlation of cold climate, high dust and productivity in the Subantarctic region, a band of ocean encircling the globe between roughly 40 and 50 degrees south latitude that lies in the path of the winds that blow off South America, South Africa and Australia. However, it was not clear whether the productivity was due to iron fertilization or the northward shift of a zone of naturally occurring productivity that today lies to the south of the Subantarctic. This uncertainty was made more acute by the finding that ice age productivity was lower in the Antarctic Ocean, which lies south of the Subantarctic region.

To settle the matter, the research groups of Sigman at Princeton and Gerald Haug and Tim Eglinton at the Swiss Federal Institute of Technology in Zurich (ETH Zurich) teamed up to use a new method developed at Princeton. They analyzed fossils found in deep sea sediment —deposited during the last ice age in the Subantarctic region — with the goal of reconstructing past changes in the nitrogen concentration of surface waters and combining the results with side-by-side measurements of dust-borne iron and productivity. If the dust-borne iron fertilization hypothesis was correct, then nitrogen would have been more completely consumed by the plankton, leading to lower residual nitrogen concentrations in the surface waters. In contrast, if the productivity increases were in response to a northward shift in ocean conditions, then nitrogen concentrations would have risen.

The researchers measured the ratio of nitrogen isotopes, which have the same number of protons but differing numbers of neutrons, that were preserved within the carbonate shells of a group of marine microfossils called foraminifera. The investigators found that nitrogen concentrations indeed declined during the cold periods when iron deposition and productivity rose, in a manner consistent with the dust-borne iron fertilization theory. Ocean models as well as the strong correlation of the sediment core changes with the known changes in atmospheric CO2 suggest that this iron fertilization of Southern Ocean plankton can explain roughly half of the CO2 decline during peak ice ages. 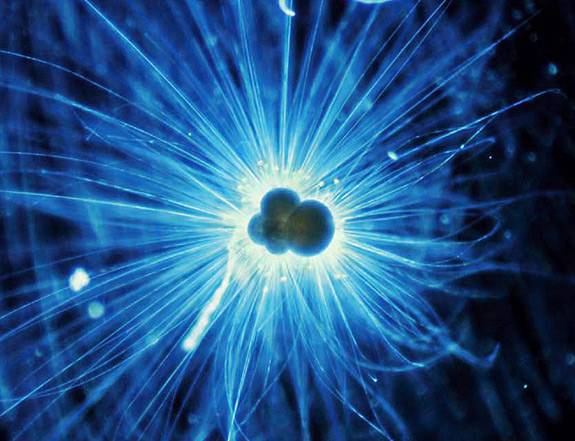 Microscopic image of a live planktonic foraminifera species Globigerina bulloides. A team led by Princeton and ETH Zurich researchers analyzed the organic nitrogen trapped within the walls of the fossil shells of this organism in order to reconstruct past ocean nutrient changes. For scale, the spines radiating away from the shell are 1 to 1.5 millimeters long. (Photo courtesy of Howard Spero, University of California-Davis)

Although Martin had proposed that purposeful iron addition to the Southern Ocean could reduce the rise in atmospheric CO2, Sigman noted that the amount of CO2 removed though iron fertilization is likely to be minor compared to the amount of CO2 that humans are now pushing into the atmosphere.

"The dramatic fertilization that we observed during ice ages should have caused a decline in atmospheric CO2 over hundreds of years, which was important for climate changes over ice age cycles," Sigman said. "But for humans to duplicate it today would require unprecedented engineering of the global environment, and it would still only compensate for less than 20 years of fossil fuel burning."

Edward Brook, a paleoclimatologist at Oregon State University who was not involved in the research, said, "This group has been doing a lot of important work in this area for quite a while and this an important advance. It will be interesting to see if the patterns they see in this one spot are consistent with variations in other places relevant to global changes in carbon dioxide."

The work was led by Alfredo Martínez-García of ETH Zurich, who made extensive measurements both at ETH Zurich and Princeton, with the help of Princeton Visiting Postdoctoral Research Associate Haojia Ren and Marietta Straub, a former visiting student research collaborator at Princeton who has a Ph.D. from ETH. The team also included Robert Anderson of Columbia University; David Hodell of the University of Cambridge; and Samuel Jaccard of the University of Bern.

The paper, "Iron Fertilization of the Subantarctic Ocean During the Last Ice Age," was published in the March 21, 2014, issue of the journal Science.