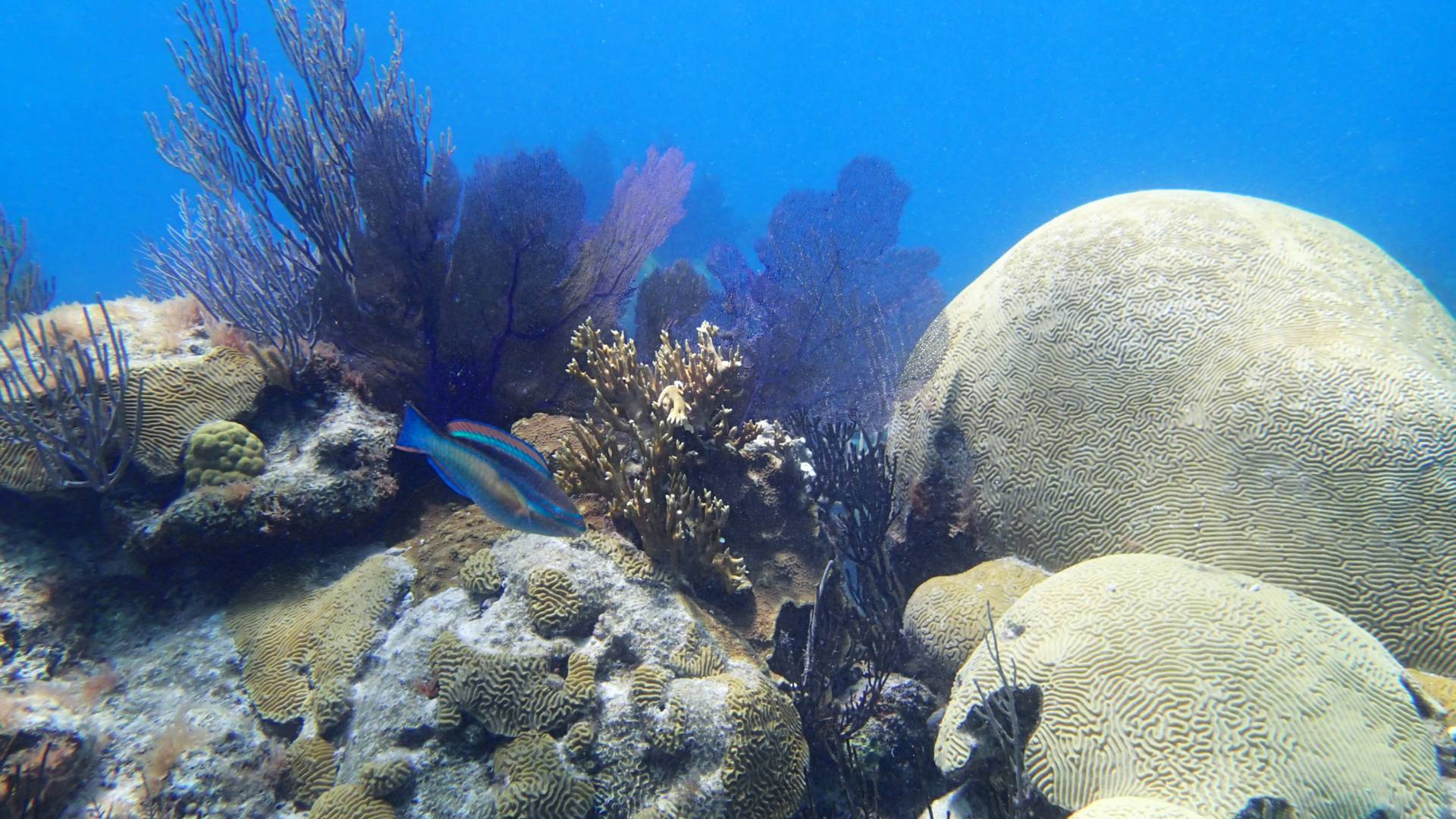 Research conducted at Princeton University found less nitrogen pollution in the open ocean off the East Coast of the United States than previously estimated. The researchers evaluated nitrogen levels in the calcium carbonate skeleton of this living brain coral (Diploria labyrinthiformis).

When nitrogen-based fertilizers flow into water bodies, the result can be deadly for marine life near shore, but what is the effect of nitrogen pollution far out in the open ocean?

A 130-year-old brain coral has provided the answer, at least for the North Atlantic Ocean off the East Coast of the United States. By measuring the nitrogen in the coral's skeleton, a team of researchers led by Princeton University found significantly less nitrogen pollution than previously estimated. The study was published online in the Proceedings of the National Academy of Sciences.

“To our surprise, we did not see evidence of increased nitrogen pollution in the North Atlantic Ocean over the past several decades,” said Xingchen (Tony) Wang, who conducted the work as part of his doctorate in geosciences at Princeton and is now a postdoctoral scholar at the California Institute of Technology.

Earlier work by the Princeton-based team, however, did find elevated nitrogen pollution in another open ocean site in the South China Sea, coinciding with the dramatic increase in coal production and fertilizer usage in China over the past two decades. The finding was reported in the journal Science in 2017.

In the new study, the researchers looked at coral skeleton samples collected in the open ocean about 620 miles east of the North American continent near the island of Bermuda, a region thought to be strongly influenced by airborne nitrogen released from U.S. mainland sources such as vehicle exhaust and power plants.

Although the team found no evidence that human-made nitrogen was on the rise, the researchers noted variations in nitrogen that corresponded to levels expected from a natural climate phenomenon called the North Atlantic Oscillation, Wang said.

The result is in contrast to previously published computer models that predicted a significant increase in human-made nitrogen pollution in the North Atlantic.

The work may indicate that U.S. pollution control measures are successfully limiting the amount of human-generated nitrogen emissions that enter the ocean.

“Our finding has important implications for the future of human nitrogen impact on the North Atlantic Ocean,” said Wang. “Largely due to advances in pollution technology, human nitrogen emissions from the U.S. have held steady or even declined in recent decades," he said. "If emissions continue at this level, our results imply that the open North Atlantic will remain minimally affected by nitrogen pollution in coming decades.”

Nitrogen, when in its biologically available form and supplied in excess, can cause overgrowth of plants and algae and lead to severe ecosystem harm, including marine "dead zones" that form when microorganisms consume all the oxygen in the water, leaving none for fish. Fertilizer production and fossil fuel burning have greatly increased the production of biologically available, or "fixed," nitrogen since the early 20th century.

When emitted to the atmosphere, fixed nitrogen can influence the ocean far from land. However, the impacts on the ocean are difficult to study because of the challenges involved in making long-term observations in the open ocean.

Corals can help. Stony or "Scleractinian" corals are long-lived organisms that build a calcium carbonate skeleton as they grow. The corals soak up nitrogen from the surrounding water and deposit a small portion in their skeletons. The skeletons provide a natural record of nitrogen emissions.

To distinguish human-made, or anthropogenic, nitrogen from the naturally occurring kind, the researchers take advantage of the fact that nitrogen comes in two weights. The heavier version, known as 15N, contains one more neutron than the lighter 14N. Anthropogenic nitrogen has a lower ratio of 15N to 14N than does the nitrogen in the ocean.

“It has long been my dream to use the nitrogen in coral skeletons to reconstruct past environmental changes; thanks to Tony, we are now doing it,” said Daniel Sigman, the Dusenbury Professor of Geological and Geophysical Sciences at Princeton.

While a graduate student at Princeton, Wang developed a sensitive and precise method to measure the 15N-to-14N ratio using a mass spectrometer, which is like a bathroom scale for weighing molecules.

To collect coral samples in the North Atlantic Ocean, Wang and Anne Cohen, an associate scientist in geology and geophysics at Woods Hole Oceanographic Institution, led a team in 2014 to Bermuda. The investigators removed a sample of the calcium carbonate skeleton from a living brain coral (Diploria labyrinthiformis) about 10 feet below the surface on Hog Reef, about six miles from the main island. The researchers confirmed that Bermuda's nitrogen run-off was not a factor at the site by measuring nitrogen levels in plankton floating nearby.

In addition to Wang, Cohen and Sigman, the research featured contributions from Princeton graduate student in geosciences Victoria Luu, Haojia Ren of National Taiwan University, Zhan Su of Caltech and Gerald Haug of the Max Planck Institute for Chemistry.

The study, "Natural forcing of the North Atlantic nitrogen cycle in the Anthropocene," by Xingchen Tony Wang, Anne Cohen, Victoria Luu, Haojia Ren, Zhan Su, Gerald Haug and Daniel Sigman, was published online the week of Oct. 1 in the Proceedings of the National Academy of Sciences (DOI: 10.1073/pnas.1801049115). This work was supported by the National Science Foundation (OCE-1060947 and OCE-1537338) and Princeton University's Grand Challenges Program.