The mutually beneficial relationship between algae and modern corals — which provides algae with shelter, gives coral reefs their colors and supplies both organisms with nutrients — began more than 210 million years ago, according to a new study by an international team of scientists including researchers from Princeton University.

That this symbiotic relationship arose during a time of massive worldwide coral-reef expansion suggests that the interconnection of algae and coral is crucial for the health of coral reefs, which provide habitat for roughly one-fourth of all marine life. Reefs are threatened by a trend in ocean warming that has caused corals to expel algae and turn white, a process called coral bleaching. 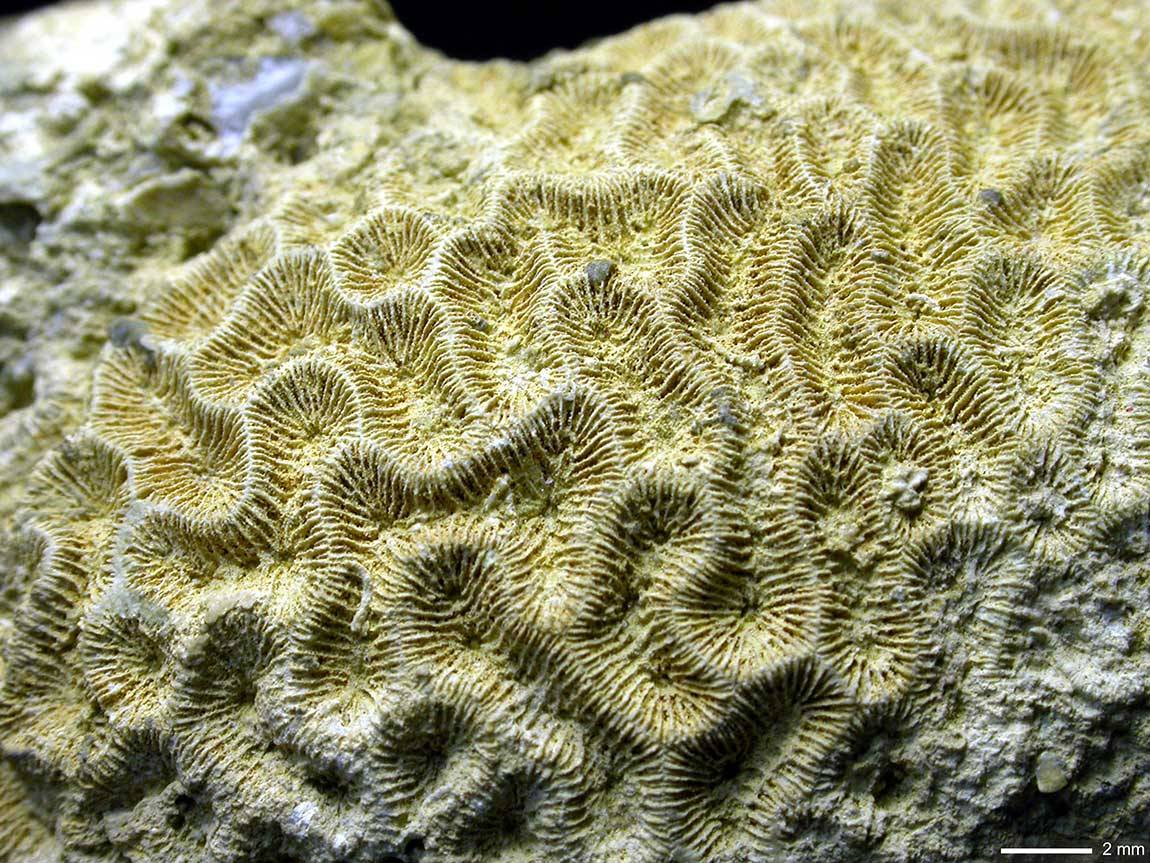 The mutually beneficial relationship between algae and modern corals — which provides algae with shelter, gives coral reefs their colors and supplies both organisms with nutrients — began more than 210 million years ago, according to a new study. Evidence of symbiosis was detected in fossilized coral specimens (pictured) dating back to the late Triassic period. Today's coral reefs are under threat from warming sea temperatures that cause coral to expel algae in a process called coral bleaching. (Photo courtesy of Jarosław Stolarski, Polish Academy of Sciences)

Published in the journal Science Advances, the study found strong evidence of this coral-algae relationship in fossilized coral skeletons dating back more than 210 million years to the late Triassic period, a time when the first dinosaurs appeared and Earth's continents were a single land mass known as Pangea. Although symbiosis is recognized to be important for the success of today's reefs, it was less clear that that was the case with ancient corals.

"It is important to know how far back in time symbiosis evolved because it gives insight into how important symbiosis is to the health of coral reefs," said Daniel Sigman, Princeton's Dusenbury Professor of Geological and Geophysical Sciences and a member of the Princeton Environmental Institute. "It appears that the origin of symbiosis corresponds to the rise of coral reefs in general."

In addition to confirming that symbiosis dates back to the Triassic, the study found that the corals inhabited nutrient-poor marine environments — not unlike today's subtropical waters — where algae-coral symbiosis played a major role in driving reef development.

"The onset of symbiosis with algae was highly profitable for corals," said lead author Jarosław Stolarski, a professor of biogeology at the Institute of Paleobiology at the Polish Academy of Sciences. "It allowed them to survive in very nutrient-poor waters, and at the same time grow and expand."

The mutually beneficial relationship between corals and algae arose when corals were rapidly expanding despite their nutrient-poor marine environment, which suggests that symbiosis is crucial to reef health. Brown dots in a sample of modern coral tissue (left) indicate algae that are creating nutrients through photosynthesis that are passed on to corals. Symbiotic corals exhibit banded growth patterns (right, indicated by red arrows) that correspond to the availability of daylight. (Photos courtesy of Isabelle Domart-Coulon, National Museum of Natural History, and Jarosław Stolarski, Polish Academy of Sciences)

Algae belonging to the group known as dinoflagellates live inside the corals' tissues. The algae use photosynthesis to produce nutrients, many of which they pass to the corals' cells. The corals in turn emit waste products in the form of ammonium, which the algae consume as a nutrient.

This relationship keeps the nutrients recycling within the coral rather than drifting away in ocean currents and can greatly increase the coral's food supply. Symbiosis also helps build reefs — corals that host algae can deposit calcium carbonate, the hard skeleton that forms the reefs, up to 10 times faster than non-symbiotic corals.

Finding out when symbiosis began has been difficult because dinoflagellates have no hard or bony parts that fossilize. Instead, the researchers looked for three types of signatures in the coral fossils that indicate the past presence of algae: fossil microstructures, levels of different types of carbon and oxygen, and levels of two forms of nitrogen. 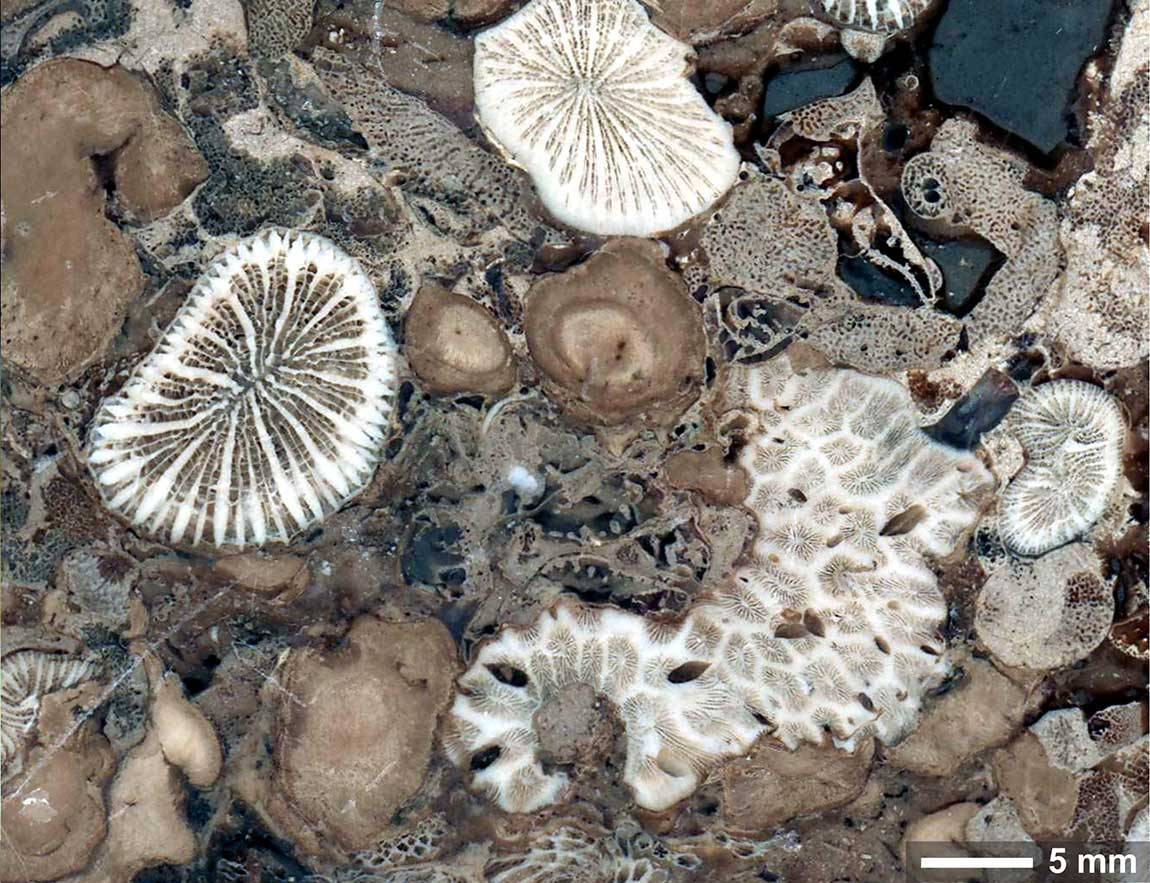 This polished fossil slab used in the study dates to more than 210 million years ago and contains well-preserved symbiotic corals. The fossils were collected in a mountainous region in Antalya, Turkey, and originated in the Tethys Sea, a shallow sunlit body of water that existed when the Earth's continents were one solid land mass called Pangea. (Photo courtesy of Jarosław Stolarski, Polish Academy of Sciences)

First author Katarzyna Frankowiak of the Institute of Paleobiology at the Polish Academy of Sciences conducted the microstructural analysis with assistance from Marcelo Kitahara of the Federal University of São Paulo in Brazil, Maciej Mazur of the University of Warsaw, and Anders Meibom of the Ecole Polytechnique Fédérale de Lausanne and the Université de Lausanne. Their analysis revealed regularly spaced patterns of growth consistent with the symbiotic corals' reliance on algal photosynthesis, which only takes place during daylight.

Frankowiak and Anne Gothmann, who earned her Ph.D. from Princeton's Department of Geosciences in 2015 and is now a postdoctoral researcher at the University of Washington, measured the ratios of different types of oxygen and carbon and found that the results matched what would be expected when symbiosis occurs.

The third approach, determining the forms of nitrogen — which derive in part from the ammonium the corals had excreted — was conducted by Xingchen (Tony) Wang, who earned his doctoral degree in geosciences from Princeton in 2016 and is now a postdoctoral research fellow working with Sigman.

The nitrogen atoms, which are trapped in the fossil's calcium-carbonate matrix, come in two forms, or isotopes, that vary only by how many neutrons they have: 14N has seven neutrons while 15N has eight neutrons, making it slightly heavier. By studying modern corals, researchers knew that symbiotic corals contain a lower ratio of 15N to 14N compared to non-symbiotic corals. The team found that the fossilized corals also had a low 15N-to-14N ratio, indicating they were symbiotic.

"Although algae were not present in the fossils, they left behind chemical signatures," Wang said. "We found strong evidence that the fossilized coral were symbiotic and that they lived in a nutrient-poor environment. We were able to link the environmental conditions from 200 million years ago to the evolution of corals."

George Stanley, a professor of geosciences at the University of Montana, had earlier explored the question of when symbiosis first evolved in corals. "This confirms a hypothesis that my colleagues and I put forth 20 years ago," said Stanley, who is familiar with the research but had no role in it. "It is really exciting to see this confirmation."

The fossils used in the study were collected in a mountainous region in Antalya, Turkey. During their lifetime, they lived in a shallow sunlit body of water called the Tethys Sea.

Stanley said the work would not have been possible without the coral fossils, which were remarkably well-preserved. "These corals are such a wonderful resource because they are as if you picked them up off the beach yesterday, and this is because they were sealed in deposits for centuries."

The fossil record also shows a significant reef expansion occurred around 205 million years ago, and this fits with a boost in coral growth due to the development of symbiosis, Stanley said.