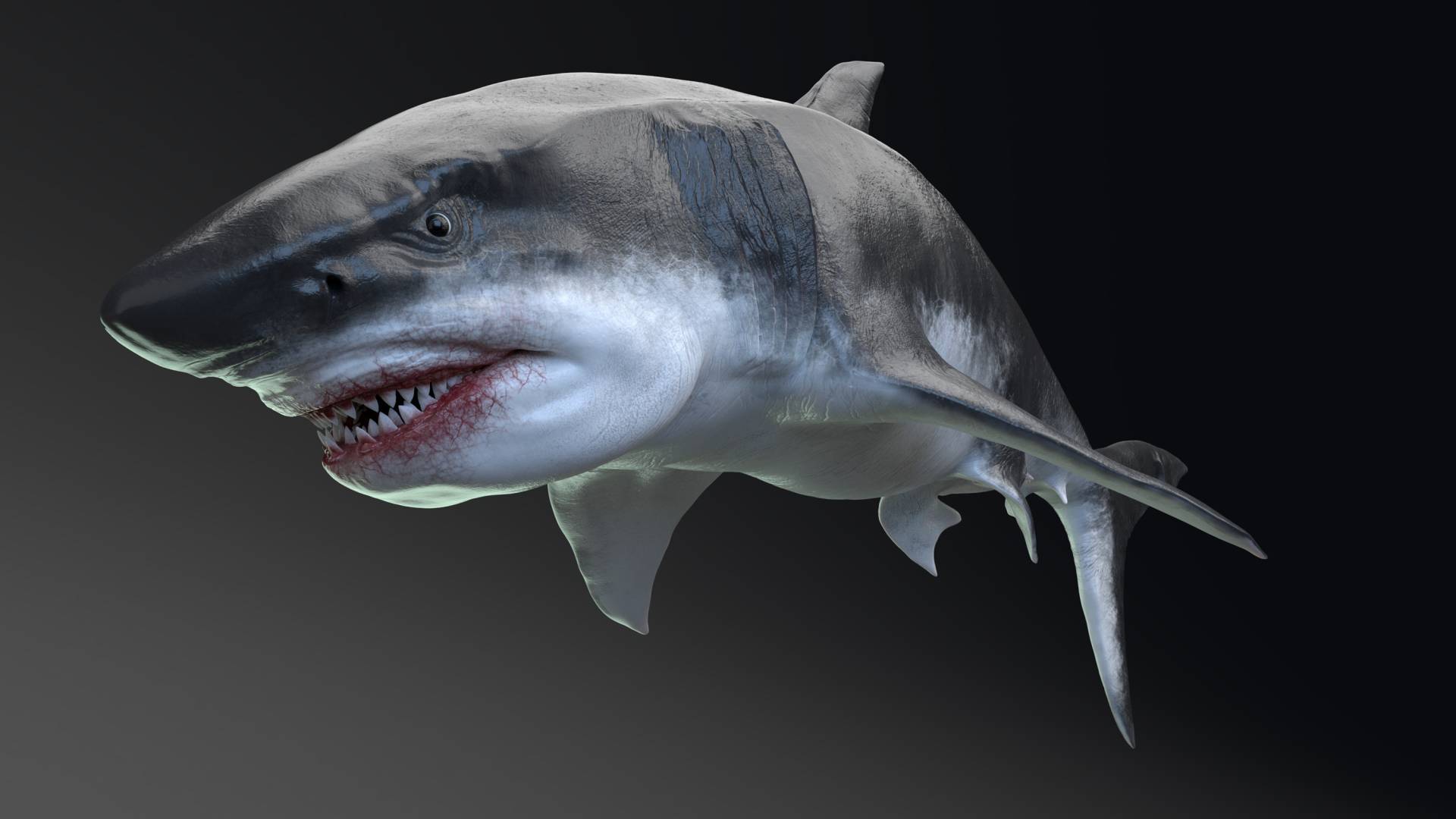 Megalodon sharks, which went extinct about 3 million years ago, were three times longer than modern great white sharks and were apex predators at the highest trophic level ever measured.

New Princeton research shows that prehistoric megatooth sharks, the biggest sharks that ever lived, were apex predators at the highest level ever measured.

Megatooth sharks get their name from their massive teeth, which can each be bigger than a human hand. The group includes Megalodon, the largest shark that ever lived, as well as several related species. 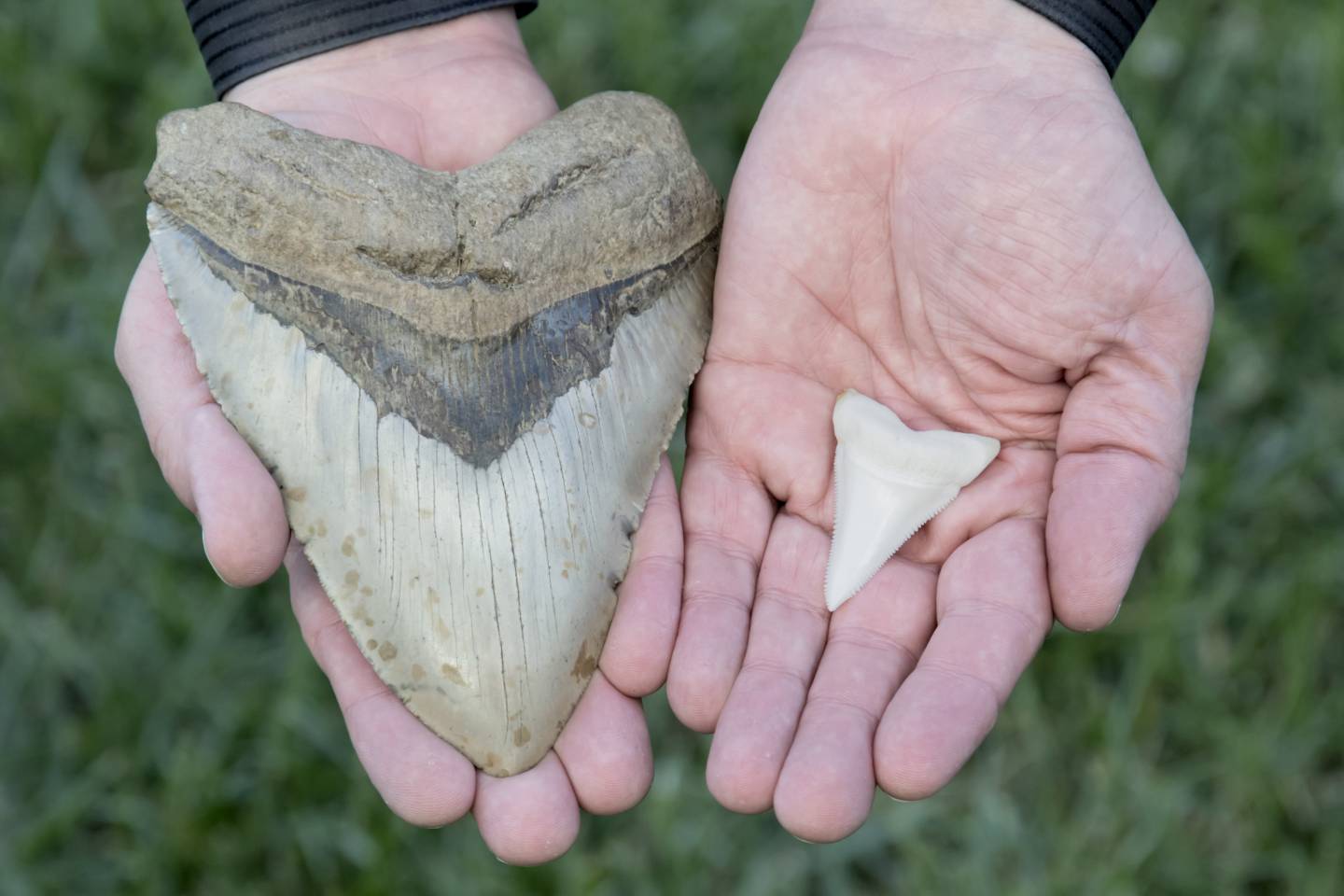 Megalodons are known only from the teeth they left behind. Here, a megalodon tooth (left) is compared to a great white shark tooth. Each inch of tooth corresponds to about 10 feet of length: 20 feet for the 2-inch great white shark tooth and 60 feet for the 6-inch megalodon tooth. Encased in rock-hard enamel, teeth are more easily preserved than bones, let alone a shark's cartilage skeleton. Shark teeth are one of the most abundant fossil types because sharks have existed for more than 400 million years, and the predators are constantly growing and losing teeth, so every shark produces thousands of teeth over its lifetime.

“We’re used to thinking of the largest species — blue whales, whale sharks, even elephants and diplodocuses — as filter feeders or herbivores, not predators,” said Emma Kast, a 2019 Ph.D. graduate in geosciences who is the first author on a new study in the current issue of Science Advances. “But Megalodon and the other megatooth sharks were genuinely enormous carnivores that ate other predators, and Meg went extinct only a few million years ago.”

Her adviser Danny Sigman, Princeton’s Dusenbury Professor of Geological and Geophysical Sciences, added, “If Megalodon existed in the modern ocean, it would thoroughly change humans’ interaction with the marine environment.” 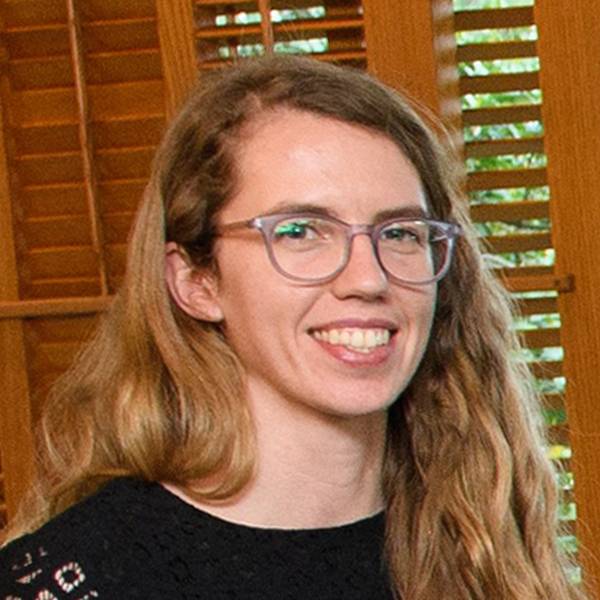 Emma Kast, a Ph.D. graduate of Princeton who is now at the University of Cambridge, is the first author on a new paper in the journal Science Advances. The paper began as a chapter in her 2019 dissertation.

A team of Princeton researchers has now discovered clear evidence that Megalodon and some of its ancestors were at the very highest rung of the prehistoric food chain – what scientists call the highest “trophic level.” Indeed, their trophic signature is so high that they must have eaten other predators and predators-of-predators in a complicated food web, say the researchers.

“Ocean food webs do tend to be longer than the grass-deer-wolf food chain of land animals, because you start with such small organisms,” said Kast, now at the University of Cambridge, who wrote the first iteration of this research as a chapter in her Princeton dissertation. “To reach the trophic levels we’re measuring in these megatooth sharks, we don’t just need to add one trophic level — one apex predator on top of the marine food chain — we need to add several onto the top the modern marine food web.” 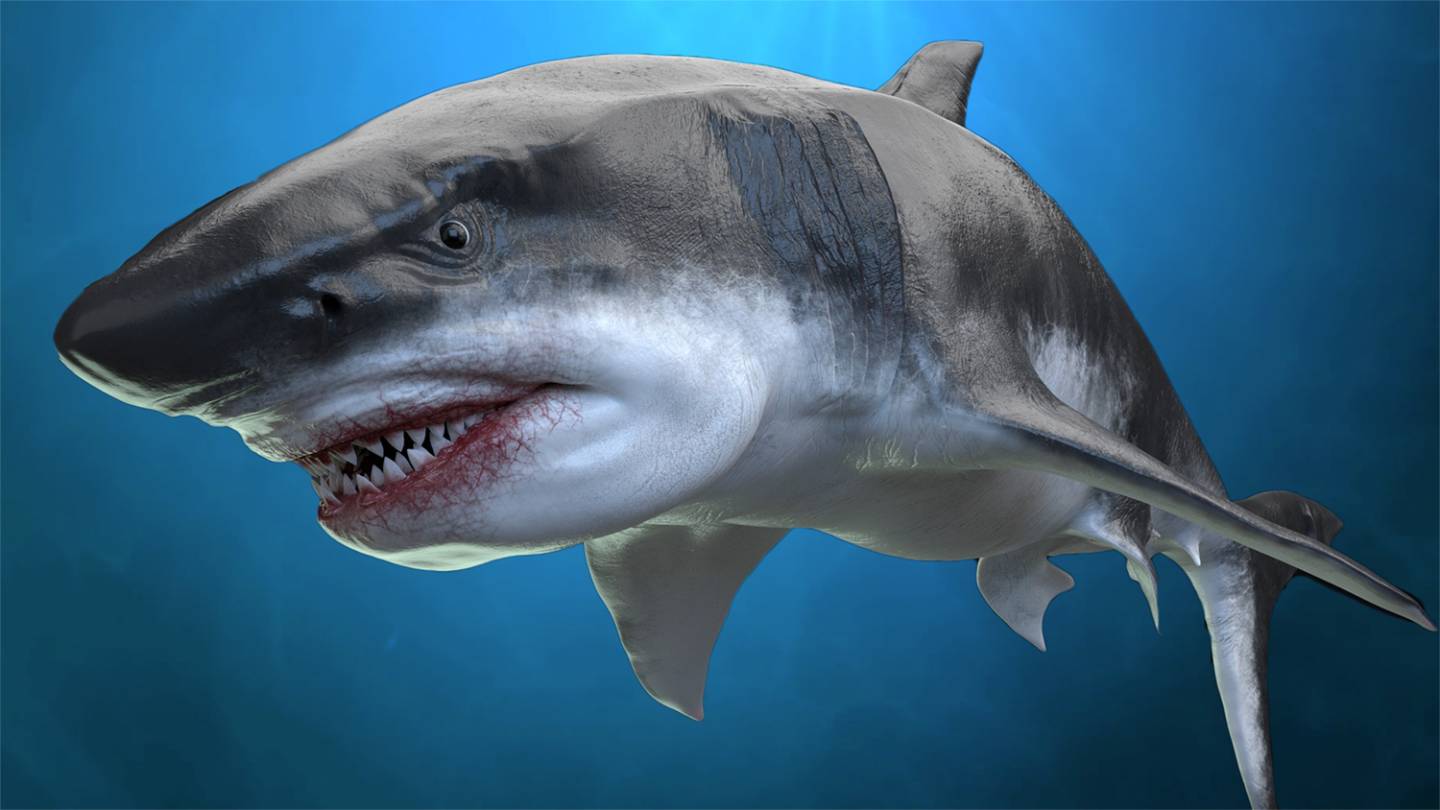 To reach their conclusions about the prehistoric marine food web, Kast, Sigman and their colleagues used a novel technique to measure the nitrogen isotopes in the sharks’ teeth. Ecologists have long known that the more nitrogen-15 an organism has, the higher its trophic level, but scientists have never before been able to measure the tiny amounts of nitrogen preserved in the enamel layer of these extinct predators’ teeth.

“We have a series of shark teeth from different time periods, and we were able to trace their trophic level versus their size,” said Zixuan (Crystal) Rao, a graduate student in Sigman’s research group and a co-author on the current paper.

One way to tuck in an extra trophic level or two is cannibalism, and several lines of evidence point to that in both megatooth sharks and other prehistoric marine predators.

Without a time machine, there’s no easy way to recreate the food webs of extinct creatures; very few bones have survived with teeth marks that say, “I was chewed on by a massive shark.”

Fortunately, Sigman and his team have spent decades developing other methods, based on the knowledge that the nitrogen isotope levels in a creature’s cells reveal whether it is at the top, middle or bottom of a food chain. 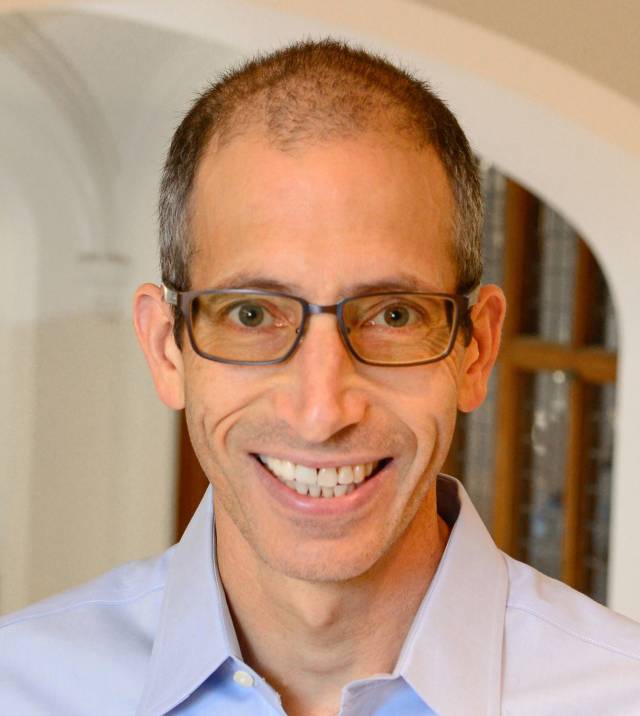 Professor Danny Sigman has spent decades developing more and more refined techniques for extracting and measuring the nitrogen isotope ratios from trace fossils, which reveal whether the organism was at the top, middle or bottom of the food chain. Now, with a little help from dentists' drills and some specially bred microbes, his team has determined that Megalodon and its fellow megatooth sharks were apex predators at the highest trophic (food web) level ever measured.

“The whole direction of my research team is to look for chemically fresh, but physically protected, organic matter — including nitrogen — in organisms from the distant geologic past,” said Sigman.

A few plants, algae and other species at the bottom of the food web have mastered the knack of turning nitrogen from the air or water into nitrogen in their tissues. Organisms that eat them then incorporate that nitrogen into their own bodies, and critically, they preferentially excrete (sometimes via urine) more of nitrogen’s lighter isotope, N-14, than its heavier cousin, N-15.

Other researchers have used this approach on creatures from the recent past — the most recent 10-15 thousand years — but there hasn’t been enough nitrogen left in older animals to measure, until now.

Why? Soft tissue like muscles and skin are hardly ever preserved. To complicate matters, sharks don’t have bones — their skeletons are made of cartilage.

But sharks do have one golden ticket into the fossil record: teeth. Teeth are more easily preserved than bones because they are encased in enamel, a rock-hard material that is virtually immune to most decomposing bacteria.

“Teeth are designed to be chemically and physically resistant so they can survive in the very chemically reactive environment of the mouth and break apart food that can have hard parts,” Sigman explained. And in addition, sharks aren’t limited to the 30 or so pearly whites that humans have. They are constantly growing and losing teeth — modern sand sharks lose a tooth every day of their decades-long lives, on average — which means that every shark produces thousands of teeth over its lifetime.

“When you look in the geologic record, one of the most abundant fossil types are shark teeth,” said Sigman. “And within the teeth, there is a tiny amount of organic matter that was used to build the enamel of the teeth — and is now trapped within that enamel.”

Since shark teeth are so abundant and are preserved so well, the nitrogen signatures in enamel provide a way to measure status in the food web, whether the tooth fell from a shark’s mouth millions of years ago or yesterday. 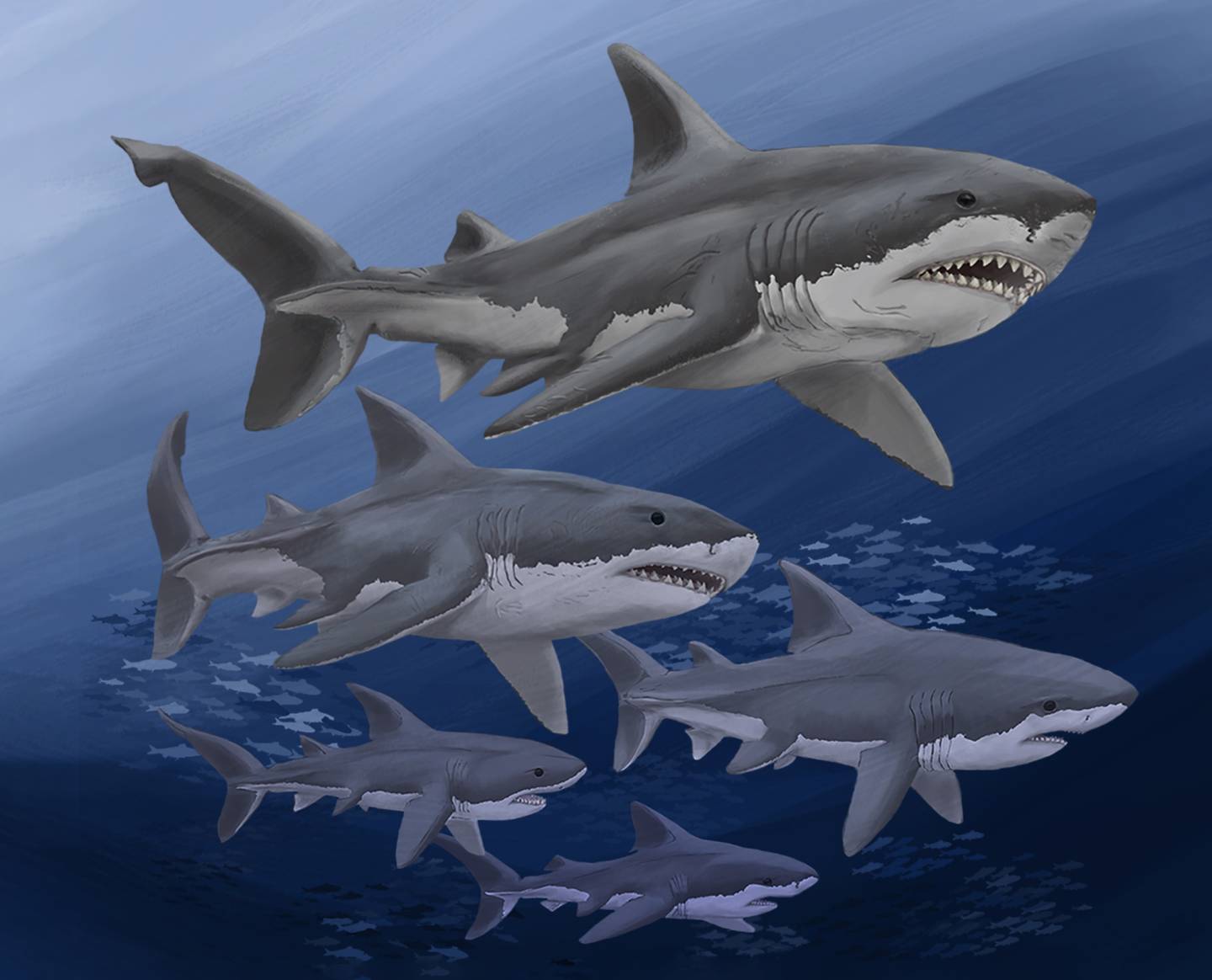 Even the largest tooth has only a thin casing of enamel, of which the nitrogen component is only a tiny trace. But Sigman’s team has been developing more and more refined techniques for extracting and measuring these nitrogen isotope ratios, and with a little help from dentist drills, cleaning chemicals and microbes that ultimately convert the nitrogen from within the enamel into nitrous oxide, they’re now able to precisely measure the N15-N14 ratio in these ancient teeth.

“This has been a multiple-decades-long quest that I’ve been on, to develop a core method to measure these trace amounts of nitrogen,” Sigman said. From microfossils in sediments, they moved on to other types of fossils, like corals, fish ear bones and shark teeth. “Next, we and our collaborators are applying this to mammalian teeth and dinosaur teeth.”

A deep dive into the literature during lockdown

Early in the pandemic, while her friends were making sourdough starters and bingeing Netflix, Kast pored through the ecologic literature to look for nitrogen isotope measurements of modern marine animals.

“One of the cool things that Emma did was really dig into the literature — all the data that’s been published over decades — and relate that to the fossil record,” said Michael (Mick) Griffiths, a paleoclimatologist and geochemist at William Patterson University and a co-author on the paper.

As Kast quarantined at home, she painstakingly built up a record with more than 20,000 marine mammal individuals and more than 5,000 sharks. She wants to take things much further. “Our tool has the potential to decode ancient food webs; what we need now is samples,” said Kast. “I’d love to find a museum or other archive with a snapshot of an ecosystem — a collection of different kinds of fossils from one time and place, from forams near the very base of the food web, to otoliths — inner ear bones — from different kinds of fish, to teeth from marine mammals, plus shark teeth. We could do the same nitrogen isotope analysis and put together the whole story of an ancient ecosystem.”

In addition to the literature search, their database includes their own samples of shark teeth. Co-author Kenshu Shimada of DePaul University connected with aquariums and museums, while co-authors Martin Becker of William Patterson University and Harry Maisch of Florida Gulf Coast University gathered megatooth specimens on the sea floor. 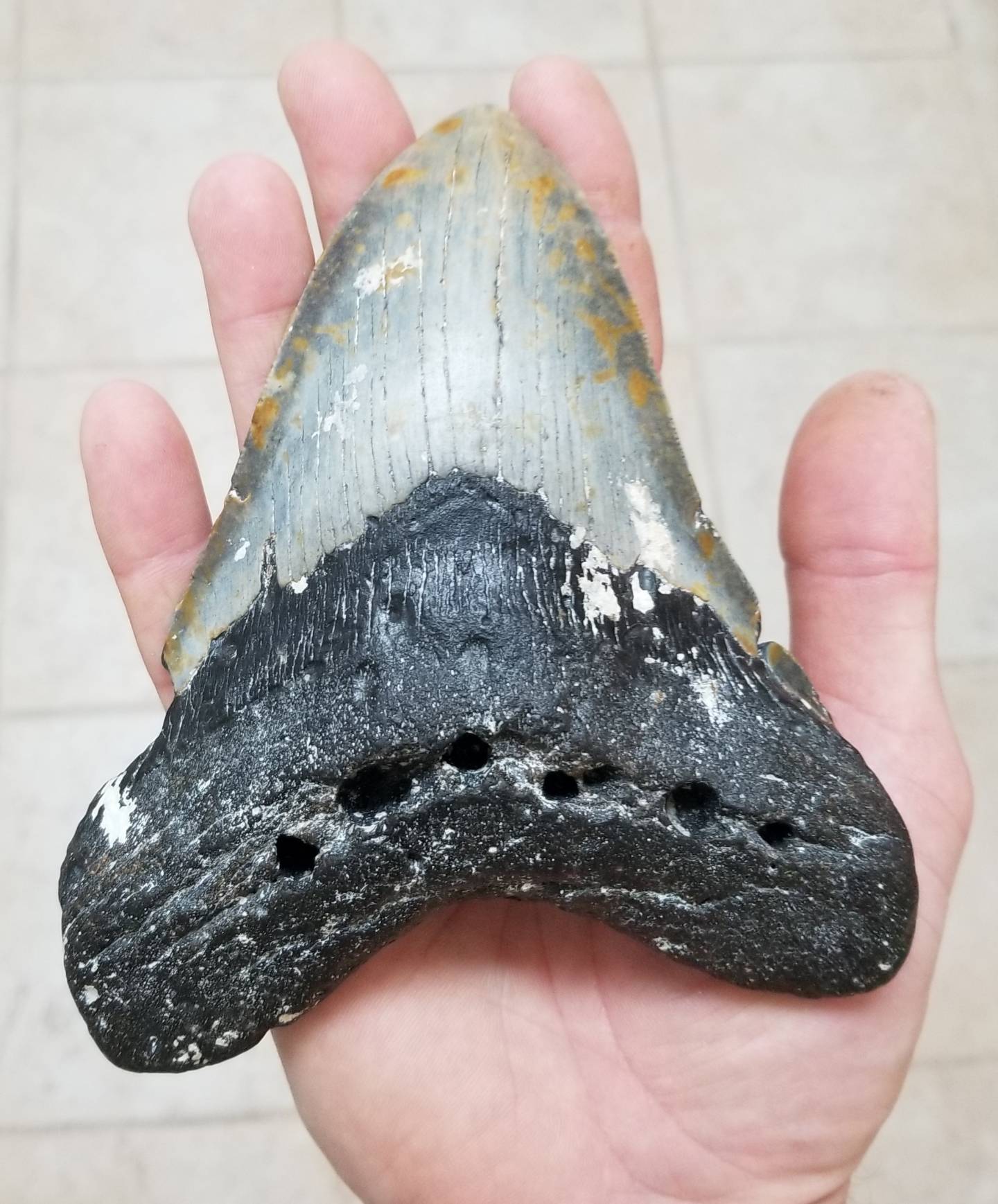 Harry Maisch of Florida Gulf Coast University, whose hand is holding this Megalodon tooth, gathered many of the samples used in this analysis and is a co-author on the new paper.

“It’s really dangerous; Harry’s a dive master, and you really need to be an expert to get these,” said Griffiths. “You can find little shark teeth on the beach, but to get the best-preserved samples, you need to go down to the bottom of the ocean. Marty and Harry have collected teeth from all over the place.”

He added: “It’s been a really collaborative effort to obtain the samples to pull this together. In general, collaborating with Princeton and other regional universities is really exciting because the students are amazing and my colleagues there have been really great to work with.”

Alliya Akhtar, a 2021 Ph.D. graduate from Princeton, is now a postdoctoral researcher in Griffiths' lab.

“The work I did for my dissertation (looking at isotopic composition of seawater) posed as many questions as it answered, and I was incredibly grateful to have the opportunity to continue working on some of these with a collaborator/mentor I respect,” Akhtar wrote in an email. “I’m most excited about all the work that is still to be done, all the mysteries yet to be solved!”