The cyclic wobble of the Earth on its axis controls the production of a nutrient essential to the health of the ocean, according to a new study in the journal Nature. The discovery of factors that control this nutrient, known as "fixed" nitrogen, gives researchers insight into how the ocean regulates its own life-support system, which in turn affects the Earth's climate and the size of marine fisheries.

Researchers from Princeton University and the Swiss Institute of Technology in Zurich (ETH) report that during the past 160,000 years nitrogen fixation rose and fell in a pattern that closely matched the changing orientation of Earth's axis of rotation, or axial precession. Axial precession occurs on a cycle of roughly 26,000 years and arises because the Earth wobbles slightly as it rotates, similar to the wobble of a toy top. Studies from the 1980s revealed that precession leads to a regular upwelling of deep water in the equatorial Atlantic Ocean roughly every 23,000 years. The upwelling in turn brings nitrogen-poor water to the surface where blue-green algae convert nitrogen drawn from the air into a form that is biologically usable.

The finding that nitrogen fixation is determined by precession-driven upwelling appears to indicate that the ocean's fixed nitrogen reservoir is resilient and that the ocean biosphere can recover from even the most dramatic ecological changes, said second author Daniel Sigman, Princeton's Dusenbury Professor of Geological and Geophysical Sciences. 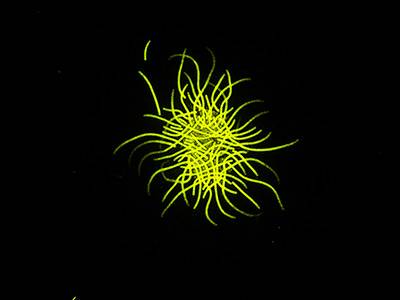 Researchers from Princeton University and the Swiss Institute of Technology in Zurich found that the wobble of the Earth on its axis controls the production of fertilizing nitrogen essential to the health of the ocean. The wobble, known as axial precession, causes an upwell of nitrogen-poor (but phosphorus-rich) water from the deep ocean roughly every 23,000 years. Blue-green algae such as Trichodesmium (above) feed on the phosphorous as they convert, or "fix," nitrogen in the air into a biologically active form that becomes part of the ocean's nitrogen cycle. (Image courtesy of the Center for Microbial Oceanography, University of Hawaii)

"By studying the response of nitrogen fixation to different environmental changes in the Earth's past, we have found connections that may ensure that the ocean's fixed nitrogen level will always rebound," Sigman said. "This suggests that an ocean over time has a relatively stable nutrient reservoir, and thus stable productivity."

The rise of deep water spurs nitrogen fixation because that water is low in nitrogen but contains an excess of another key nutrient, phosphorus, Sigman said. The phosphorus fuels the fixing of nitrogen carried out by blue-green algae, also known as cyanobacteria.

"The phosphorus-rich, nitrogen-poor water is a boon to cyanobacteria that can fix their own nitrogen," Sigman said. "By growing more rapidly, the nitrogen-fixers 'top up' the fixed nitrogen to the levels needed by other phytoplankton."

Sigman collaborated on the study with Princeton graduate student Mathis Hain; first-author Marietta Straub, Alfredo Martínez-García, A. Nele Meckler and senior author Gerald Haug, all in the Department of Earth Sciences at ETH; and Haojia Ren of the Columbia University Lamont-Doherty Earth Observatory.

The researchers tracked changes in nitrogen fixation in the North Atlantic Ocean by measuring the fixed nitrogen contained in the shells of marine animals recovered from sediment in the Caribbean Sea. Working in Sigman's lab, the investigators measured the amount of two types of nitrogen known as 14N and 15N contained in the shells of tiny marine animal plankton called foraminifera. The ratio of 15N to 14N was then used to reconstruct the rate of nitrogen fixation.

The reconstructed history of North Atlantic nitrogen fixation (black) is partly driven by the cyclic wobble of the Earth's axis of rotation (orange) and its effect on equatorial Atlantic upwelling. (Image courtesy of Daniel Sigman, Department of Geosciences)

"Our findings suggest that this upwelling was the dominant influence on nitrogen fixation," Sigman said.

Douglas Capone, a professor and chair of biological sciences at the University of Southern California, said that the research is notable both for understanding the nitrogen cycle and for providing a method to study it.

"I have long pondered and hoped for ways to reconstruct deeper historical trends in this important nitrogen-cycle process," Capone said. "The new study by the Sigman and Haug groups is a major breakthrough in providing a means to do this along with throwing light on the major controls on this key process over long time scales."

The paper, "Changes in North Atlantic nitrogen fixation controlled by ocean circulation," was published in Nature Sept. 12. The research was supported by the Swiss and U.S. National Science Foundations and Princeton's Grand Challenges Program.