When oceanographer Bess Ward was granted research time aboard the R/V Sally Ride during the middle of the spring semester, she had to figure out how to teach GEO 428, “Biological Oceanography,” from the Pacific Ocean. 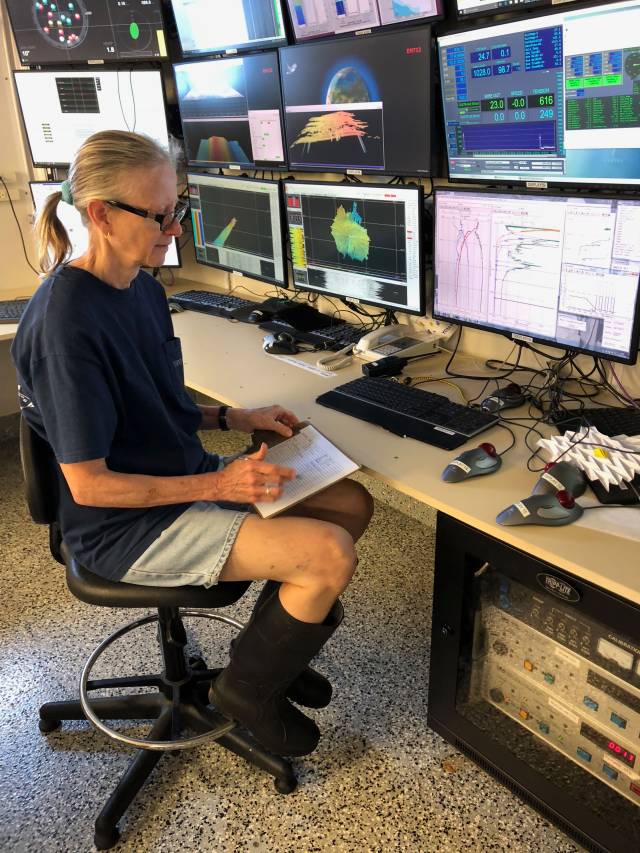 Oceanographer Bess Ward analyzes data in real time as samples are gathered from the Eastern Tropical North Pacific Ocean, off the coast of Mexico.

She created a teaching schedule that used student presentations, a series of guest lecturers, and her first teaching assistant for this course, who showed the students videos that Ward created and uploaded from the ship as it sampled the waters off the coast of Mexico. The goal of the work in the Pacific Ocean was to find and analyze the microbes that play a key role in climate change and ozone depletion.

“I hate that I had to leave the class for five weeks, but there was literally no other time for us to take this cruise,” said Ward, Princeton’s William J. Sinclair Professor of Geosciences and the Princeton Environmental Institute. “I told my students, ‘If I'm going to be a biological oceanographer, I have to go to sea. You're witnessing firsthand an oceanographer doing the thing you're learning about.’”

One of the 13 students in the class, John Tracey, came on the cruise with her. “I read the papers for the class while we were on the ship,” said Tracey, a graduate student. “I was also studying for my general exam at the same time. I think the combination of reading the papers, studying for generals, talking to everyone on the ship, and having the opportunity to ask lots of questions as we ate lunch and dinner really helped me learn more from the class.”

Together, Ward, Tracey and three other researchers from Ward’s lab gathered and analyzed more than 6,000 samples of ocean water — and the nitrous oxide-producing microbes living in it. By analyzing the level of nitrogen and oxygen at different depths, the researchers were seeking to resolve exactly where and how much nitrous oxide is produced and consumed by ocean microbes.

Mapping out the origins and sinks of the powerful greenhouse gas has significant implications for modeling global warming. Microbes produce more than half of the planet’s nitrous oxide, which is not only contributing to climate change but also depleting ozone, said Ward, who is the chair of the Department of Geosciences.

“Nitrous oxide will soon be the most important ozone-depleting agent, because we have managed to control CFCs,” she said. “CFCs are going down and nitrous oxide is going up, so it’s important to understand nitrous oxide. And the things that make it, other than internal combustion, are microbes. They both make it and consume it, and the making and consuming both happen in environments where there’s not very much oxygen.” 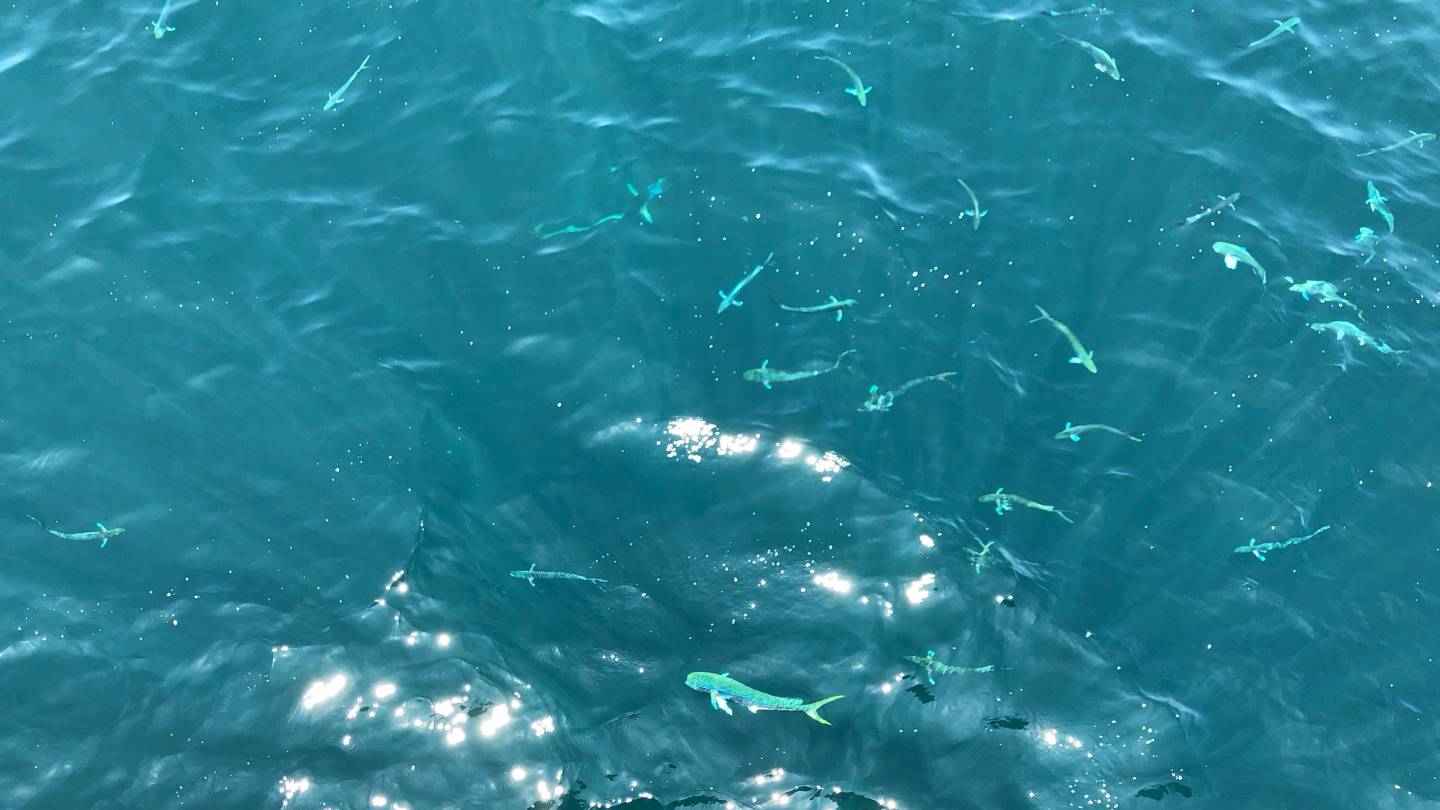 As the R/V Sally Ride cruised through the warm Pacific waters, the researchers were often surrounded by dolphins, sharks and other small and large sea creatures. The animals were not only beautiful but also a clue to the complex water chemistry of the area, said Ward.

In the area they were sampling, the global circulation of the ocean and atmosphere brings nutrient-rich deep waters up to the surface, a process known as upwelling. When upwellling occurs in an area with restricted ventilation, oxygen cannot be supplied to the water as quickly as it is removed by decaying microbes, resulting in an Oxygen Minimum Zone — which happens in only three locations around the world.

“These are the richest fishing areas in the world, these three regions,” Ward said. “When you physically bring nitrate-rich waters up to the surface, you get productivity. And then all this productivity — all this fish and other biomass — it gets eaten or else it sinks and degrades on the way down. Things that degrade use up oxygen, so you have this really super-rich surface water and oxygen-depleted water underneath, and that’s why we’re here.”

The Eastern Tropical North Pacific Ocean, off the western coast of Mexico, is the most accessible of the three upwelling regions, Ward said. But there’s no high-speed Wi-Fi in the middle of the ocean, so Skyping into class twice a week wasn’t an option.

Instead, Ward recorded videos that showed the work she was doing, then slowly uploaded them (via satellite) for her students back on campus. She also sent raw data from the depth profiles — chemical and biological measurements taken at different ocean depths — gathered by the research vessel’s instruments. During class, assistant in instruction Rachel Harris, a graduate student, walked the students through the videos, giving them a chance to ask questions about the rationale behind the cruise and the data Ward was gathering.

The students — juniors, seniors and graduate students — enjoyed having access to the unfiltered data, Harris said. “Students see depth profiles all semester from various papers, but the fact that they were able to work on problem-set questions based on raw data that were being collected in real time was really cool.”

To gather the data and the water samples, the researchers depended on “the CTD,” a sampling instrument that gathers water samples and measures the conductivity, temperature and pressure of seawater. (The D stands for depth, which is related to pressure.) 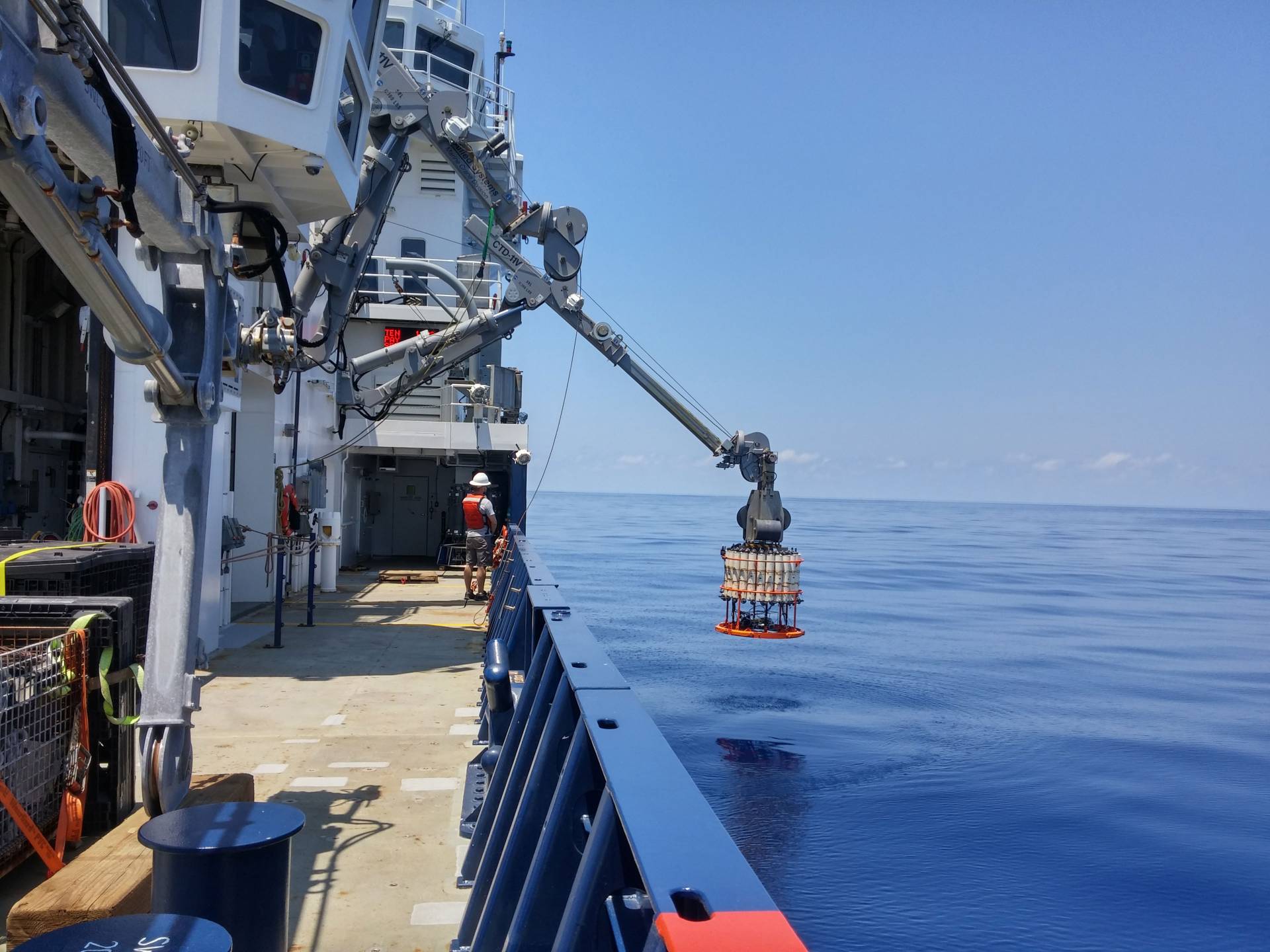 The crew prepares to lower the CTD into the ocean to gather water samples and measurements.

On every sampling run, researchers would lower the CTD deep into the ocean. Each of the bottles ringing the instrument can open and close independently when triggered manually or by a computer, allowing the device to gather water samples from many different depths for later biological and chemical analysis.

“Life on the ship revolves around sampling, morning, noon and night,” Ward said. 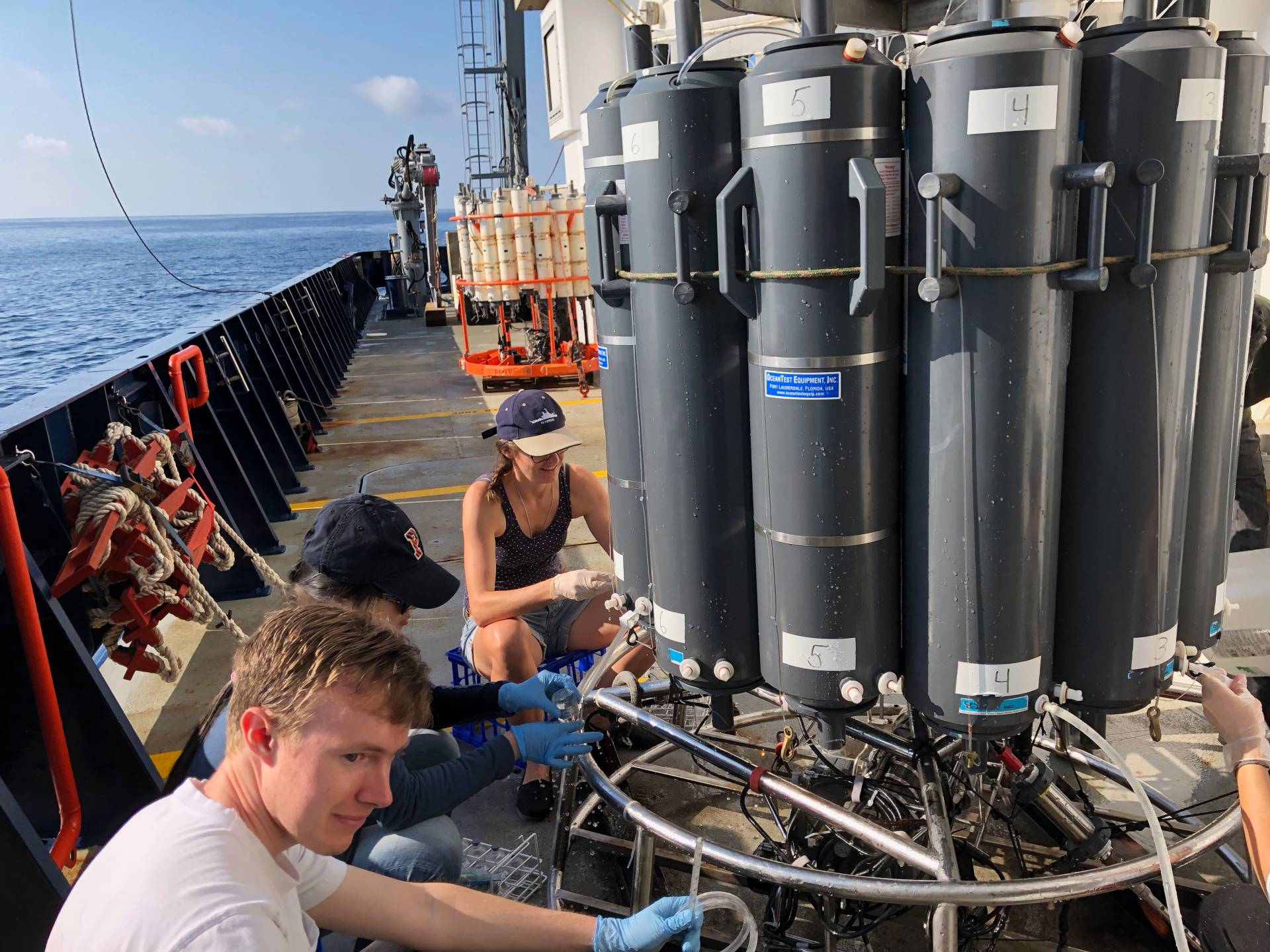 When the CTD finishes its sampling run, researchers draw off samples into small bottles and vials to begin their experiments. Graduate student John Tracey (left) was enrolled in “Biological Oceanography” and preparing for his general exams while working on the ship.

On this research cruise, Ward had her first chance to use “oxidots,” a tiny, novel technology for measuring the oxygen concentration in each water sample. “We were really excited about this brand-new system,” said Ward. “The whole science project is focused around the fact that there is no oxygen in the seawater where we’re working, and as you might imagine, it’s nearly impossible to sample and maintain that. We were really thrilled to have this new apparatus that allowed us to put the water in the bottle and then measure how much oxygen was in there without opening the bottles.” 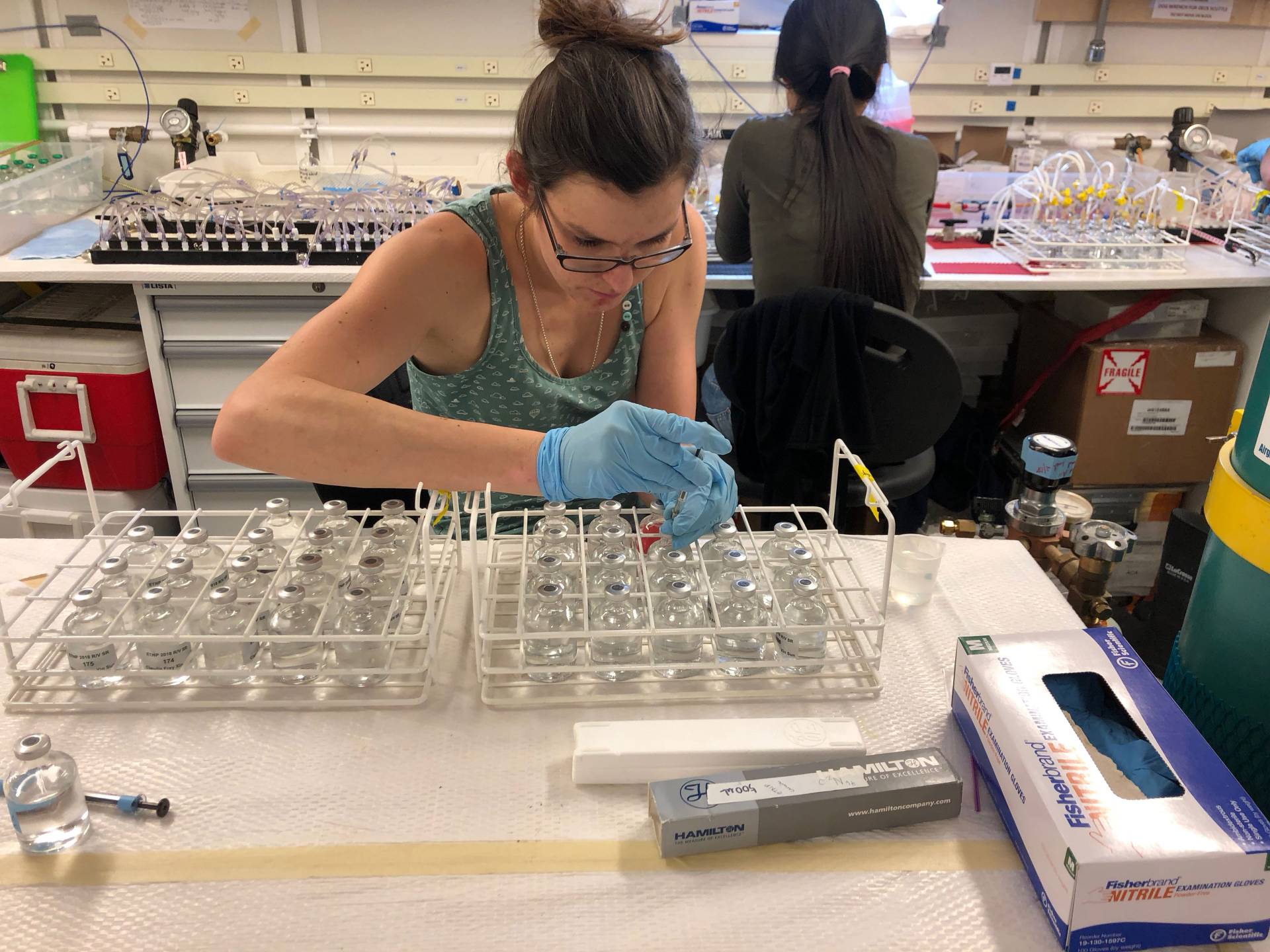 Postdoctoral research associate Claudia Frey, now at the University of Basel in Switzerland, uses a syringe to inject a tracer into one of the roughly 6,000 bottles of water and microbes that the research team collected, while graduate student Xin Sun analyzes data behind her.

With such a short window of time to gather samples that will provide years of analysis, researchers spent long hours gathering and preparing samples. “Being on a research cruise is such a precious opportunity that nobody wants to waste a second,” said Xin Sun, a graduate student in Ward’s lab.

But while the science never stops, there’s still time for meals and laughter. “We learned from each other by chatting about science while enjoying bagels with peanut butter,” Sun said. “We cheered each other up by singing and playing guitar after working crazily on a process station. I cherish the science and the friendship I gained from the cruise very, very much.”

The close quarters for work, meals and downtime led to a remarkable educational environment, Tracey and Sun agreed. “It’s easy to go seamlessly from lab work to studying to learning from other people,” Tracey said. “Many of Bess’s former grad students were helpfully grilling me — asking questions — to help me prepare for generals. I’ve never had an experience of learning that way, building friendships while learning and exploring things together.” 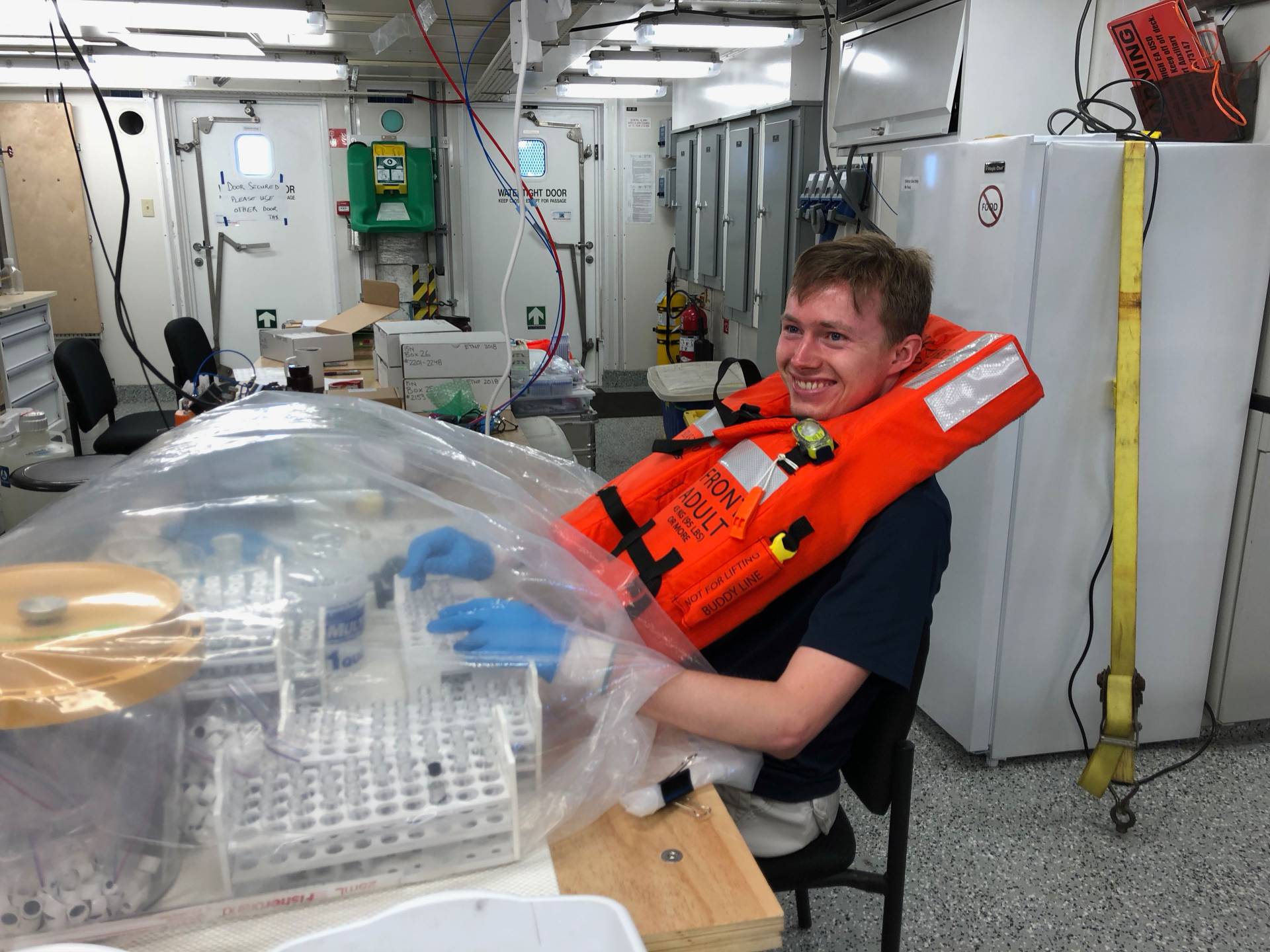 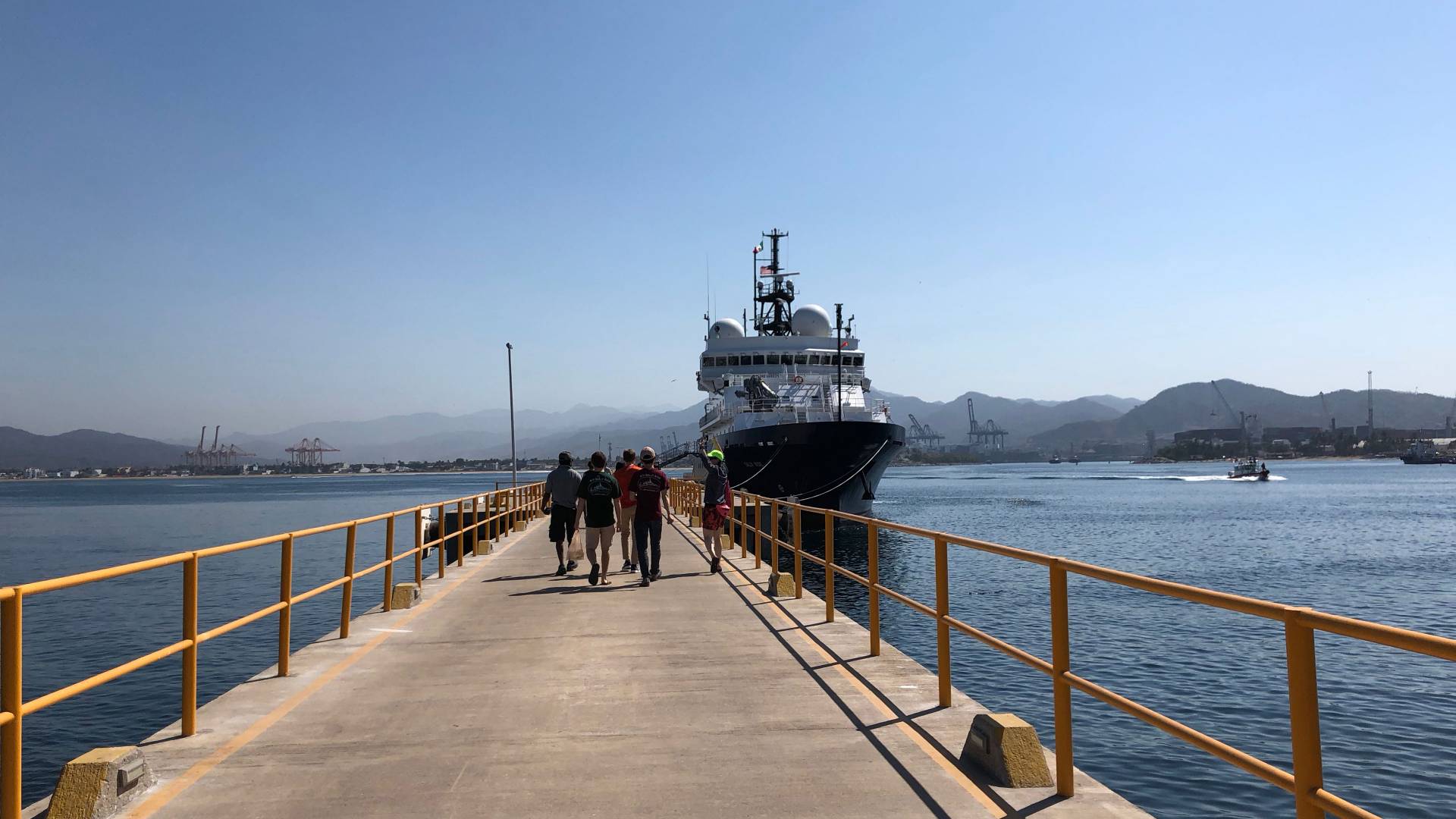 Scientists walk back to the research vessel Sally Ride, one of the largest research vessels in the U.S. fleet, at the dock in Manzanillo, Mexico. From left: Amal Jayakumar, a senior professional specialist in geosciences; Tyler Tamasi of the Class of 2015; Tracey, Xuefeng (Nick) Peng, who completed his Ph.D. with Ward in 2015; and postdoctoral research associate Ashley Maloney. 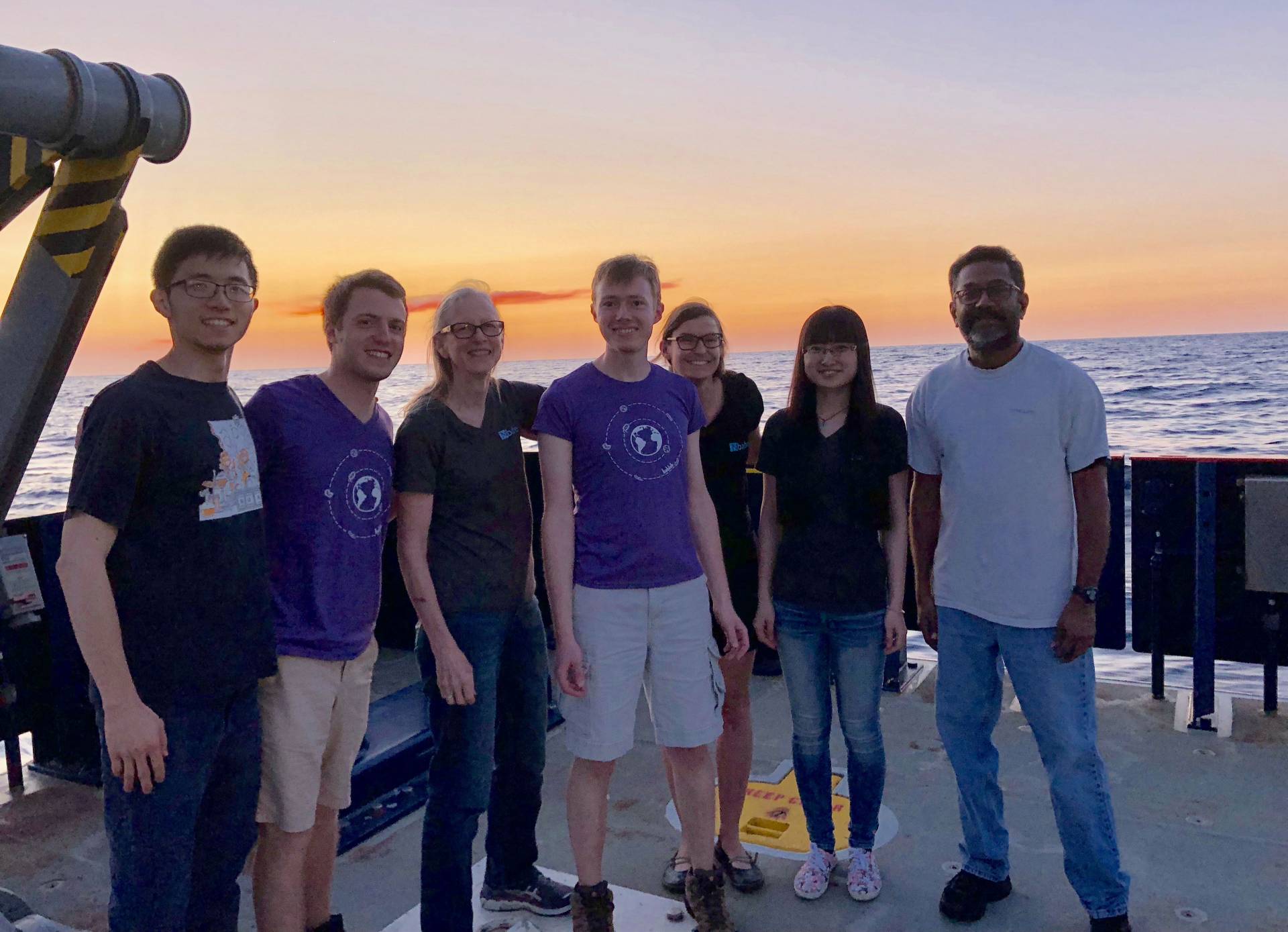