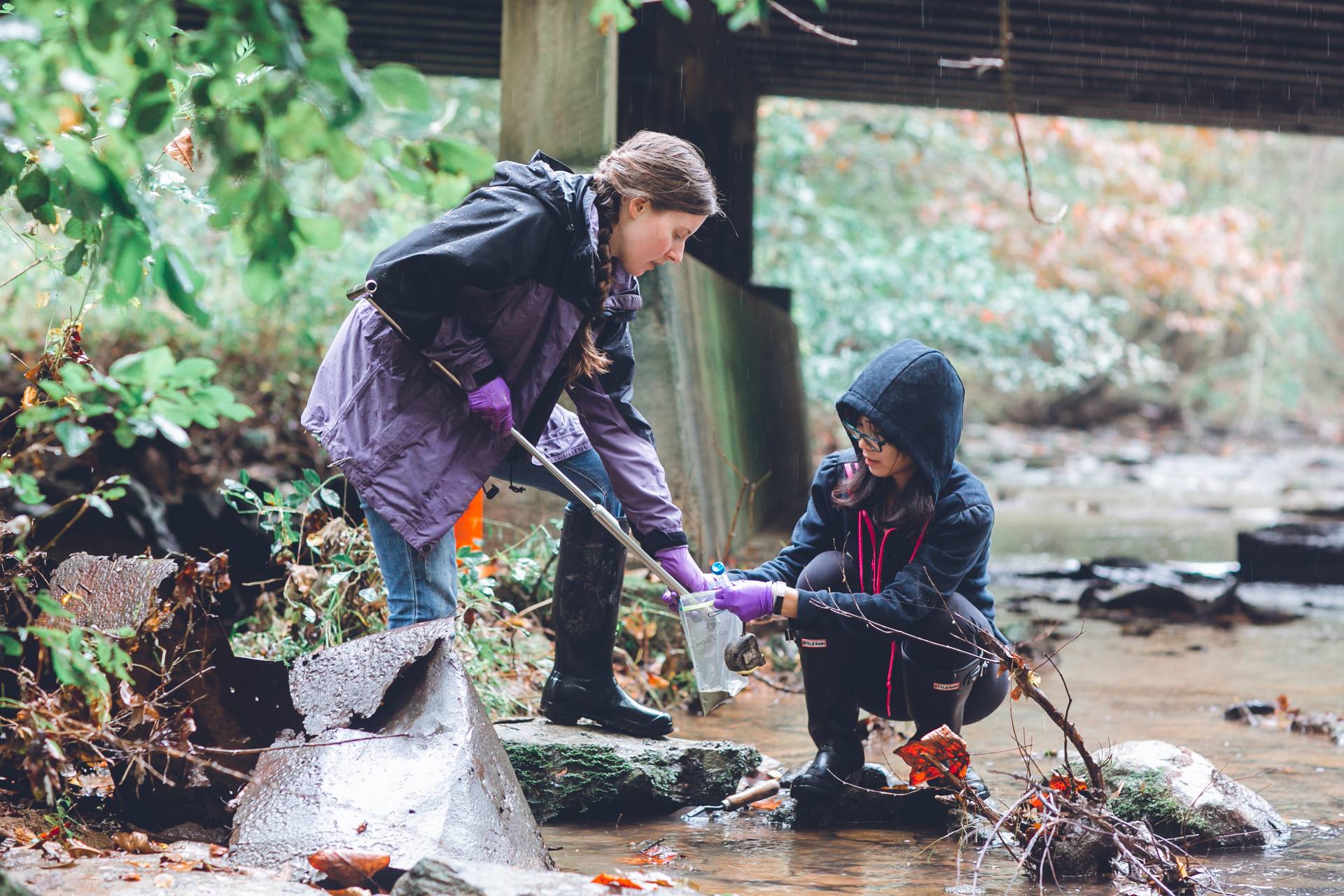 Princeton graduate students (from left) Arianna Sherman and Weitao Shuai collect a soil sample from a tributary of the Neuse River in Hillsborough, North Carolina, as part of a project investigating nutrient cycling and pollution in the wake of Hurricane Florence.

On a rainy Saturday in October, Princeton graduate students Arianna Sherman and Weitao Shuai parked their car by a bridge on a rural road in Hillsborough, North Carolina. In rubber boots, they waded into a muddy stream to begin investigating how farm waste and a giant storm may have disrupted an ecosystem.

Sherman and Shuai, both members of Peter Jaffe’s research group in civil and environmental engineering, had come to investigate nutrient cycling and pollution along the Neuse River in the wake of Hurricane Florence, a September storm that drenched eastern North Carolina with more than 20 inches of rain and led to near-record flooding along the river. Sherman and Jaffe had recently wrapped up a two-year study on the Neuse, but extended their project to explore the effects of the hurricane.

Much of the Neuse is lined with hog farms, and while some of the animals’ waste is treated and used as fertilizer, many excess nutrients from the farms’ open-air cesspools wash into the river. This overload of nitrogen-based nutrients can lead to harmful algal blooms that threaten water quality and disrupt the ecosystem.

“When you have all of this flooding, the waste pools containing the nitrogen get flushed, and they all come downstream,” said Sherman. “We knew it would take a while for the farmers to get their operations back online” after the storm, she added. “With this flushing of nitrogen coming out of the cesspools and then no more nitrogen loading for a period of time, we wanted to see how the system would react.” 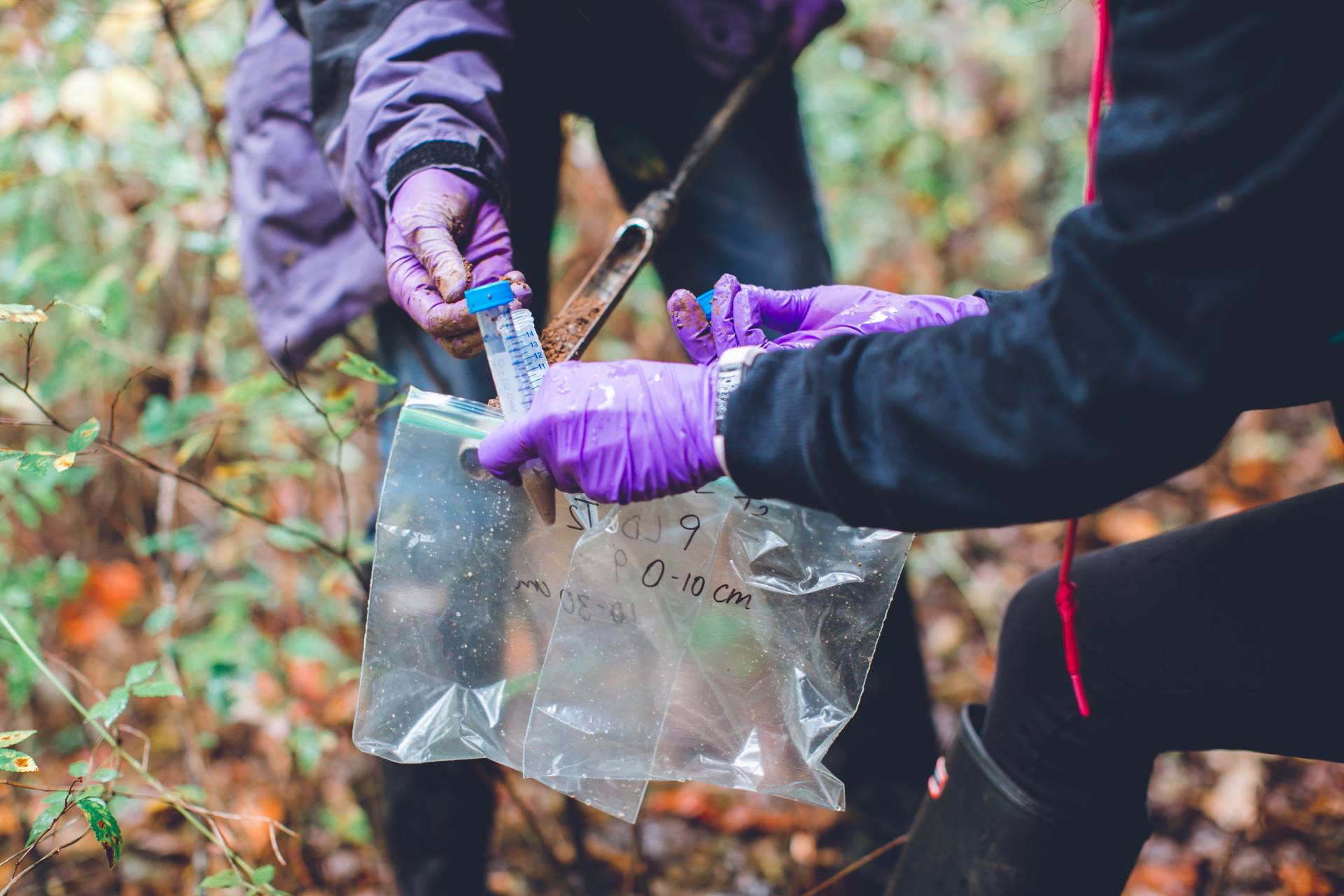 Graduate students in Peter Jaffe’s research group take soil samples from along the Neuse River and its tributaries. Back at their lab in Princeton, the researchers examine the samples to understand a chemical process called Feammox, a potential breakthrough in eliminating nitrogen pollutants.

Working through a smaller rainstorm a month after the hurricane, the two students filled test tubes with water and pushed a long metal tube a foot into the muck to collect soil. Back at their lab in Princeton, Sherman is examining the samples to understand a chemical process called Feammox, which Jaffe’s team first discovered in a New Jersey wetland in 2004. Jaffe and others now recognize Feammox as a potential breakthrough in eliminating nitrogen pollutants.

In the Feammox reaction, certain bacteria can break down (oxidize) ammonium, a major nitrogen-based component of hog waste. This reaction is a key early step in converting nitrogen pollutants into harmless nitrogen gas. Critically, Feammox bacteria carry out the reaction in the absence of oxygen. Whereas wastewater treatment plants usually consume a lot of energy forcing air into wastewater to facilitate the cleanup, Feammox has the potential to remediate pollution in soil and groundwater where little oxygen is available.

The Neuse River’s soils are acidic and iron-rich, providing ideal conditions for the Feammox process, said Jaffe, the William L. Knapp ’47 Professor of Civil Engineering and associate director for research at Princeton’s Andlinger Center for Energy and the Environment. Feammox requires periodic replenishment with oxidized iron, or natural rust, which absorbs a leftover electron during the Feammox process in a step known as reduction. “It’s possible that a big storm event exposes fresh iron, so we wanted to examine if the process gets rejuvenated by floods.” Hurricane Florence presented “a unique opportunity to check that out,” said Jaffe.

Sherman and Shuai collected soil and water samples at six sites along the Neuse and its tributaries, including an area upstream from the hog farms to study pollutant levels and chemical processes occurring prior to heavy contamination. Sherman is analyzing the Feammox process from each site by measuring concentrations of ammonium and other nitrogen-containing compounds, as well as levels of different iron forms.

Sequencing DNA extracted from the soil will reveal what types of bacteria are present; the lab’s previous work has shown that a strain in the family Acidimicrobiaceae is responsible for the Feammox reaction. To gain insights into the effects of flooding, the researchers will compare post-hurricane samples to ones collected four months earlier under more typical conditions.

Sherman is testing whether Feammox bacteria from the Neuse can, in addition to modifying iron, chemically reduce a form of selenium that often contaminates agricultural areas. Selenium is an essential mineral added as a supplement to animal feeds. Excess selenium washes into aquatic ecosystems, where it can reach toxic levels. The Feammox process may be able to convert selenium compounds to forms that are far less mobile in the environment.

“Our approach is to look at a process very fundamentally in controlled lab conditions, and then see if we can go to the field and measure it,” said Jaffe. “This is how we go from the lab to the field, and eventually to the watershed scale.”

As they gathered soil and water samples, Sherman and Shuai also left something behind: They stuck small electrodes in the soil at each sampling site. In work published in the December 2018 issue of Applied and Environmental Microbiology, Jaffe’s team found that Feammox bacteria can colonize such electrodes, with the positive end, or anode, standing in for oxidized iron compounds. If the organisms in the Neuse can also carry out Feammox on electrodes, this will further boost the prospect of using bacteria to clean up nitrogen pollution without the need for iron sources.

The researchers recently returned to retrieve the electrodes, and plan to resample each site this spring. Their ongoing analyses will show the hurricane’s longer-term effects on pollution and microbial life along the Neuse, while revealing ways to clean up such critical ecosystems.

The Jaffe team’s research on the Neuse River is supported by the Moore Charitable Foundation.