A new technique for revealing images of hidden objects may one day allow pilots to peer through fog and doctors to see more precisely into the human body without surgery.

Developed by Princeton engineers, the method relies on the surprising ability to clarify an image using rays of light that would typically make the image unrecognizable, such as those scattered by clouds, human tissue or murky water.

In their experiments, the researchers restored an obscured image into a clear pattern of numbers and lines. The process was akin to improving poor TV reception using the distorted, or "noisy," part of the broadcast signal.

"Normally, noise is considered a bad thing," said Jason Fleischer, an assistant professor of electrical engineering at Princeton. "But sometimes noise and signal can interact, and the energy from the noise can be used to amplify the signal. For weak signals, such as distant or dark images, actually adding noise can improve their quality."

He said the ability to boost signals this way could potentially improve a broad range of signal technologies, including the sonograms doctors use to visualize fetuses and the radar systems pilots use to navigate through storms and turbulence. The method also potentially could be applied in technologies such as night vision goggles, inspection of underwater structures such as levies and bridge supports, and in steganography, the practice of masking signals for security purposes.

The findings are reported online March 14 in Nature Photonics. 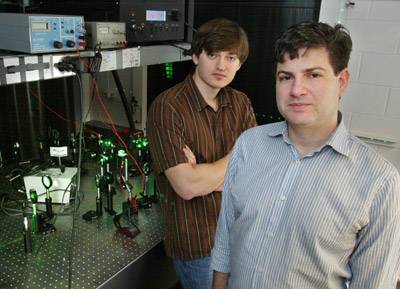 In their experiments, Fleischer and co-author Dmitry Dylov, an electrical engineering graduate student, passed a laser beam through a small piece of glass engraved with numbers and lines, similar to the charts used during eye exams. The beam carried the image of the numbers and lines to a receiver connected to a video monitor, which displayed the pattern.

The researchers then placed a translucent piece of plastic similar to cellophane tape between the glass plate and the receiver. The tape-like material scattered the laser light before it arrived at the receiver, making the visual signal so noisy that the number and line pattern became indecipherable on the monitor, similar to the way smoke or fog might obstruct a person's view.

The crucial portion of the experiment came when Fleischer and Dylov placed another object in the path of the laser beam. Just in front of the receiver, they mounted a crystal of strontium barium niobate (SBN), a material that belongs to a class of substances known as "nonlinear" for their ability to alter the behavior of light in strange ways.  In this case, the nonlinear crystal mixed different parts of the picture, allowing signal and noise to interact.

By adjusting an electrical voltage across the piece of SBN, the researchers were able to tune in a clear image on the monitor. The SBN gathered the rays that had been scattered by the translucent plastic and used that energy to clarify the weak image of the lines and numbers. 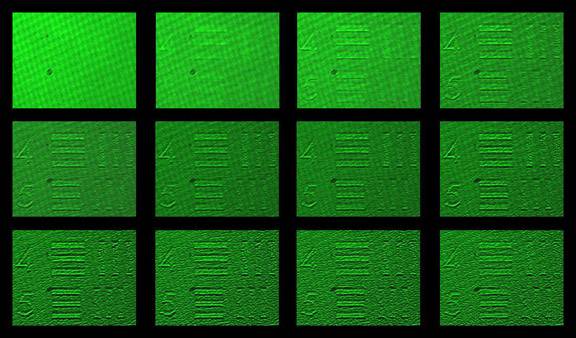 By adjusting an electrical voltage across a crystal of nonlinear material, the researchers recovered an image of lines and numbers that originally was hidden in noise (upper left). As they tuned the system (from left to right across each row from top to bottom), the image "stole" energy from the noise, first appearing and then degrading as they adjusted past the optimal voltage. (Images: Jason Fleischer/Dmitry Dylov)Watch a video of this process

"We used noise to feed signals," Dylov said. "It's as if you took a picture of a person in the dark, and we made the person brighter and the background darker so you could see them. The contrast makes the person stand out."

The technique, known as "stochastic resonance," only works for the right amount of noise, as too much can overwhelm the signal. It has been observed in a variety of fields, ranging from neuroscience to energy harvesting, but never has been used this way for imaging.

Based on the results of their experiment, Fleischer and Dylov developed a new theory for how noisy signals move through nonlinear materials, which combines ideas from the fields of statistical physics, information theory and optics.

The research was funded by the National Science Foundation, the U.S. Department of Energy and the U.S. Air Force.

Their theory provides a general foundation for nonlinear communication that can be applied to a wide range of technologies. The researchers plan to incorporate other signal processing techniques to further improve the clarity of the images they generate and to apply the concepts they developed to biomedical imaging devices, including those that use sound and ultrasound instead of light.