Princeton University engineers have developed a new laser-sensing technology that may allow soldiers to detect hidden bombs from a distance and scientists to better measure airborne environmental pollutants and greenhouse gases.

"We are able to send a laser pulse out and get another pulse back from the air itself," said Richard Miles, a professor of mechanical and aerospace engineering at Princeton, the research group leader and co-author on the paper. "The returning beam interacts with the molecules in the air and carries their fingerprints."

The new technique differs from previous remote laser-sensing methods in that the returning beam of light is not just a reflection or scattering of the outgoing beam. It is an entirely new laser beam generated by oxygen atoms whose electrons have been "excited" to high energy levels. This "air laser" is a much more powerful tool than previously existed for remote measurements of trace amounts of chemicals in the air.

The researchers, whose work is funded by the Office of Naval Research, published their new method Jan. 28 in the journal Science. 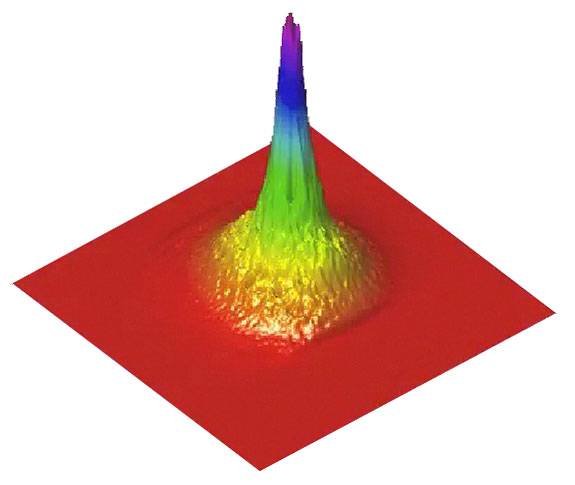 Researchers at Princeton University have developed a technique for generating a laser beam out of nothing but air, which could be used for sensing minute quantities of gas from a distance. The new technique may allow for detection of bombs and environmental pollutants. This image shows a pulse of infrared light from this "air laser." The center region represents the highest intensity; the outer areas have lower intensity light. (Image courtesy of Arthur Dogariu)

Miles collaborated with three other researchers from Princeton's Department of Mechanical and Aerospace Engineering: Arthur Dogariu, a research scholar and the lead author on the paper, and James Michael, a doctoral student; and Marlan Scully, a lecturer with the rank of professor who also is a professor of physics at Texas A&M University.

The new laser-sensing method uses an ultraviolet laser pulse that is focused on a tiny patch of air, similar to the way a magnifying glass focuses sunlight into a hot spot. Within this hot spot -- a cylinder-shaped region just 1 millimeter long -- oxygen atoms become "excited" as their electrons get pumped up to high energy levels. When the pulse ends, the electrons fall back down and emit infrared light. Some of this light travels along the length of the excited cylinder region and, as it does so, it stimulates more electrons to fall, amplifying and organizing the light into a coherent laser beam aimed right back at the original laser.

Researchers plan to use a sensor to receive the returning beam and determine what contaminants it encountered on the way back. 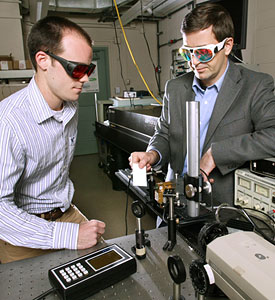 "In general, when you want to determine if there are contaminants in the air you need to collect a sample of that air and test it," Miles said. "But with remote sensing you don't need to do that. If there's a bomb buried on the road ahead of you, you'd like to detect it by sampling the surrounding air, much like bomb-sniffing dogs can do, except from far away. That way you're out of the blast zone if it explodes. It's the same thing with hazardous gases -- you don't want to be there yourself. Greenhouse gases and pollutants are up in the atmosphere, so sampling is difficult."

Any chemical explosive emits various gases depending on its ingredients, but for many explosives the amount of gas is miniscule.

The most commonly used remote laser-sensing method, LIDAR -- short for light detection and ranging -- measures the scattering of a beam of light as it reflects off a distant object and returns back to a sensor. It is commonly used for measuring the density of clouds and pollution in the air, but can't determine the actual identity of the particles or gases. Variants of this approach can identify contaminants, but are not sensitive enough to detect trace amounts and cannot determine the location of the gases with much accuracy.

The returning beam is thousands of times stronger in the method developed by the Princeton researchers, which should allow them to determine not just how many contaminants are in the air but also the identity and location of those contaminants.

The stronger signal should also allow for detection of much smaller concentrations of airborne contaminants, a particular concern when trying to detect trace amounts of explosive vapors. 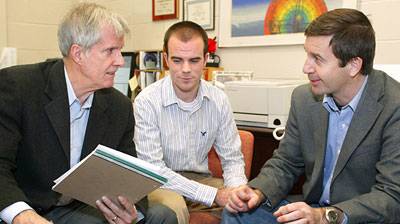 Richard Miles (left), a professor of mechanical and aerospace engineering at Princeton, led the research group. The researchers, including Michael (center) and Dogariu, are now working to develop other approaches to remote detection involving a combination of lasers and radar. (Photo by Frank Wojciechowski)

While the researchers are developing the underlying methods rather than deployable detectors, they envision a device that is small enough to be mounted on, for example, a tank and used to scan a roadway for bombs.

So far, the researchers have demonstrated the process in the laboratory over a distance of about a foot and a half. In the future they plan to increase the distance over which the beams travel, which they note is a straightforward matter of focusing the beam farther away. They also plan to fine-tune the sensitivity of the technique to identify small amounts of airborne contaminants.

In addition, the research group is developing other approaches to remote detection involving a combination of lasers and radar.

"We'd like to be able to detect contaminants that are below a few parts per billion of the air molecules," Miles said. "That's an incredibly small number of molecules to find among the huge number of benign air molecules."