In the air, it is a serious pollutant. In the body, it plays a role in heart rate, blood flow, nerve signals and immune function.

Nitric oxide, a gas well known to scientists for its myriad functions, has proven challenging to measure accurately outside the laboratory. A team of Princeton and Rice University researchers has demonstrated a new method of identifying the gas using lasers and sensors that are inexpensive, compact and highly sensitive. Such a portable device, suitable for large-scale deployment, could be of great value to atmospheric science, pollution control, biology and medicine.

Nitric oxide is so potent that a few molecules of it per billion or trillion molecules of air promote smog, acid rain and depletion of the ozone layer. Similarly tiny amounts in a patient's breath could help diagnose asthma and other disorders.

The researchers believe their device could find uses ranging from the study and control of car and truck emissions to monitoring human exposure to pollutants in urban and industrial environments. For medical uses the device is particularly attractive because the results are not corrupted by water vapor, which is present in breath samples. Testing for nitric oxide in a patient's breath, for example, could reveal chronic obstructive pulmonary disease and inflammation.

"The sensor we've developed is much more accurate and sensitive than existing systems, yet is far more compact and portable," said Gerard Wysocki, assistant professor of electrical engineering at Princeton. 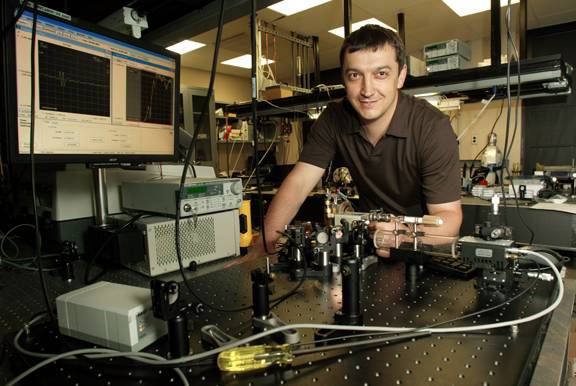 Gerard Wysocki, an electrical engineer at Princeton, worked with colleagues at Rice University to develop a highly portable and sensitive method for detecting nitric oxide gas, a key player in pollution and human physiology. The device uses a laser and an innovative type of polarizing filter to detect very small quantities of the gas. (Photo: Frank Wojciechowski)

Wysocki is a co-leader of a team that developed the system and conducted preliminary tests during the 2008 Olympic Games in Beijing. The team included Rice researchers Frank Tittel and 1996 Nobel laureate Robert Curl, both pioneers in the field of molecular detection using lasers, as well as Rafal Lewicki and James Doty III, also of Rice. The team published its results in the Aug. 4 issue of the Proceedings of the National Academy of Sciences.

With improvements made after the Beijing test, the system could be made into a portable, shoe-box-sized device ideally suited for mass deployment in large-scale unattended sensor networks for global, real-time, continuous monitoring of nitric oxide and other gases present in trace amounts.

Existing systems to detect nitric oxide and other trace gases have a variety of drawbacks. Some, such as carbon monoxide sensors for homes, are compact and inexpensive, but not very sensitive. These sensors can at best detect gases at parts-per-million concentrations -- they can't handle the parts-per-billion level, let alone the parts-per-trillion level that some applications require. High-end systems, such as mass spectrometers and gas chromatographs, are much more sensitive, but are slow, bulky, complicated and expensive -- and impractical for use outside of a lab.

Of intermediate sensitivity are optical systems that pass a laser beam through a gas sample and detect whether some of the laser light is absorbed by the gas sample. A weakness of this method is that the amount of absorption is very small compared to the overall amount of laser light, so the signal is hard to detect. Further, conventional optical sensors tend to be bulky, use large amounts of the sample, and require frequent operator intervention.

The new system developed by Princeton and Rice researchers uses optical sensing as well, but produces a much stronger signal. In their setup, the researchers passed the laser light through polarizing filters that block all light unless nitric oxide is present. Roughly speaking, the more nitric oxide, the more light makes it through the filters, Wysocki said. "There's no background signal to worry about."

Nitric oxide detectors have used similar methods before, but until now have been hampered by their reliance on large laser sources designed for laboratory use, he said. The new system, in contrast, uses a quantum cascade laser, a state-of-the-art device ideally suited for this sensing technique. This makes it possible to reliably detect the gas at a concentration of a few parts-per-billion. The device is so precise it can distinguish between different isotopes of nitrogen and oxygen in the nitric oxide molecules.

"It's remarkable we have that kind of sensitivity," said Curl, who laid the groundwork for the detection technique in a paper he co-wrote with Tittel nearly 30 years ago.

"A portable sensor that can continuously measure nitric oxide with such high sensitivity is a real breakthrough," said Tittel.

Unlike other systems that need several liters of the sample gas, the compact new sensor needs only a few milliliters of it. This frugality is particularly important in delicate biological applications such as cell-culture studies, said Wysocki. Also important, the new system can run much longer without intervention -- several hours compared to just a few minutes for even the best existing ones -- which will allow for long-term unattended operation.

Princeton researchers are working on various enhancements to the technology, further shrinking the size of the device and exploring an even more sensitive method of analysis called coherent detection. "This technique could help us achieve parts-per-trillion sensitivity," Wysocki said.

The work was supported by the National Science Foundation through a larger grant to the MIRTHE (Mid-InfraRed Technologies for Health and the Environment Engineering) Research Center based at Princeton, and by the Department of Energy as part of larger grants from Aerodyne Research Inc. and the Robert Welch Foundation.