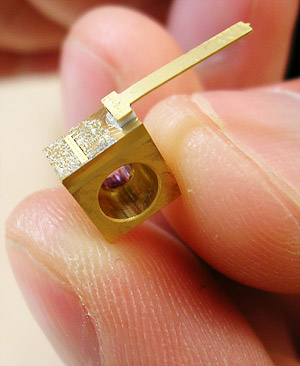 Quantum cascade lasers are small and efficient sources of mid-infrared laser beams, which are useful in medicine and environmental sensing. (Photo: Gmachl Lab)

A Princeton-led team of researchers has discovered an entirely new mechanism for making common electronic materials emit laser beams. The finding could lead to lasers that operate more efficiently and at higher temperatures than existing devices, and find applications in environmental monitoring and medical diagnostics.

"This discovery provides a new insight into the physics of lasers," said Claire Gmachl, who led the study. Gmachl, a professor of electrical engineering, is the director of the Mid-Infrared Technologies for Health and the Environment (MIRTHE) Center at Princeton.

The phenomenon was discovered in a type of device called a quantum cascade laser, in which an electric current flowing through a specially designed material produces a laser beam. Gmachl's group discovered that a quantum cascade laser they had built generated a second beam with very unusual properties, including the need for less electrical power than the conventional beam. "If we can turn off the conventional beam, we will end up with a better laser, which makes more efficient use of electrical power," said Gmachl.

The team that conducted the study includes Gmachl's graduate student Kale Franz, who built the laser that revealed the new phenomenon, and Stefan Menzel, a graduate student from the University of Sheffield in the United Kingdom, who unearthed the unique properties of the phenomenon during an internship at Princeton last summer. The study was published online Dec. 14 in Nature Photonics.

The light emitted by a laser differs fundamentally from light produced by common sources such as the sun, fire or electric lamps. According to the field of physics called quantum electrodynamics, light is made up of particles called photons. Common sources of light emit photons that are in a random order, like crowds milling about a busy marketplace. In contrast, photons in a laser are "in sync" with each other, like a band marching in formation. This property, called coherence, allows laser light to shine in an intense, narrow beam of a single, very pure color.

One way to produce a laser beam is to pass an electric current through a semiconductor such as gallium arsenide. The electric current pumps energy into the material, forcing a large number of its electrons to a higher energy level than normal. Under certain conditions, these electrons drop to a lower level of energy, and emit the extra energy in the form of synchronized photons of light. This is the mechanism underlying lasers used in CD writers, laser pointers and other common electronic devices.

The laser used in the Princeton study is a special type called a quantum cascade laser. Built at the University's nanofabrication facility, the device is about one-tenth as thick as a human hair and 3 millimeters long. Despite its tiny size, it is made of hundreds of layers of different semiconductor materials. Each layer is only a few atoms thick. In this device, electrons "cascade" through the layers as they lose energy and give off synchronized photons. 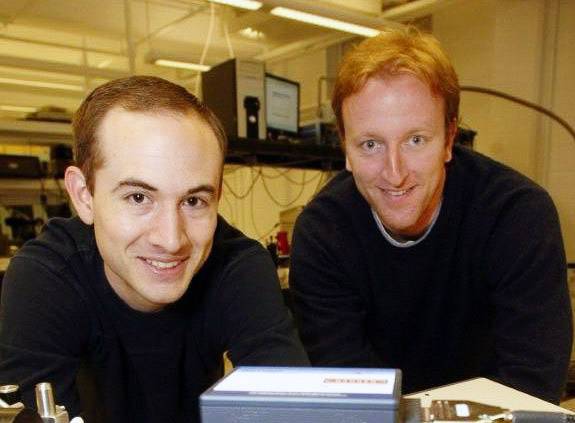 Kale Franz (left), a graduate student at Princeton's electrical engineering department, and Stefan Menzel, a graduate student at the University of Sheffield in the United Kingdom, collaborated in the discovery and analysis of a new method of producing laser beams, which could lead to more efficient devices for medical diagnostics and environmental sensing. (Photo: Frank Wojciechowski)

In an earlier study published in Applied Physics Letters in June 2007, Franz, Gmachl and others reported that a quantum cascade laser they had built unexpectedly emitted a second laser beam of slightly smaller wavelength than the main one. Further studies by Menzel and others revealed that the second beam could not be explained by any existing theory of quantum cascade lasers. Unlike a conventional semiconductor laser, the second beam grew stronger as the temperature increased, up to a point. Further, it seemed to compete with the "normal" laser, growing weaker as the latter strengthened when more electric current was supplied. "It's a new mechanism of light emission from semiconductor lasers," said Franz.

To explain this mechanism, the researchers invoked a quantum property of electrons called momentum. In the conventional view of quantum cascade lasers, only electrons of nearly zero momentum participate in "lasing" (producing laser light). Further, a substantial number of electrons has to attain the same level of energy and momentum -- be in a so-called "quasi-equilibrium" condition -- before they can participate in laser action. In contrast, studies by Gmachl's group showed that the second laser beam originated from electrons of lower energy, but higher momentum that were not in equilibrium. "It showed, contrary to what was believed, that electrons are useful for laser emission even when they are in highly non-equilibrium states," said Franz.

The new laser phenomenon has some interesting features. For instance, in a conventional laser relying on low momentum electrons, electrons often reabsorb the emitted photons, and this reduces overall efficiency. In the new type of laser, however, this absorption is reduced by 90 percent, said Franz. This could potentially allow the device to run at lower currents, and also makes it less vulnerable to temperature changes. "It should let us dramatically improve laser performance," he said.

The device used in the study does not fully attain this level of performance, because the conventional, low-efficiency laser mechanism dominates. To take full advantage of the new discovery, therefore, the conventional mechanism would need to be turned off. The researchers have started to work on methods to achieve this outcome, said Franz.

Unlike other lasers, quantum cascade lasers operate in the mid- and far-infrared range, and can be used to detect even minute traces of water vapor, ammonia, nitrogen oxides and other gases that absorb infrared light. As a result, these devices are finding applications in air quality monitoring, medical diagnostics, homeland security and other areas that require extremely sensitive detection of different chemicals. The new discovery should help make these devices smaller, more efficient and more sensitive, said Gmachl.

The research was partly sponsored by the MIRTHE Center, which is funded by the National Science Foundation (NSF). MIRTHE is a multi-institutional research collaboration for developing compact sensors to detect trace amounts of gases in the atmosphere and in human breath. Partial support was also provided by the European Union's Marie Curie Research Training Network and its Physics of Intersubband Semiconductor Emitters program, which sponsored Menzel's visit to Princeton. Franz was supported by the NSF Graduate Fellowship Program.