Princeton University researchers have developed a way to use a laser to measure people's blood sugar, and, with more work to shrink the laser system to a portable size, the technique could allow diabetics to check their condition without pricking themselves to draw blood.

"We are working hard to turn engineering solutions into useful tools for people to use in their daily lives," said Claire Gmachl, the Eugene Higgins Professor of Electrical Engineering and the project's senior researcher. "With this work we hope to improve the lives of many diabetes sufferers who depend on frequent blood glucose monitoring."

In an article published June 23 in the journal Biomedical Optics Express, the researchers describe how they measured blood sugar by directing their specialized laser at a person's palm. The laser passes through the skin cells, without causing damage, and is partially absorbed by the sugar molecules in the patient's body. The researchers use the amount of absorption to measure the level of blood sugar.

Sabbir Liakat, the paper's lead author, said the team was pleasantly surprised at the accuracy of the method. Glucose monitors are required to produce a blood-sugar reading within 20 percent of the patient's actual level; even an early version of the system met that standard. The current version is 84 percent accurate, Liakat said.

"It works now but we are still trying to improve it," said Liakat, a graduate student in electrical engineering. 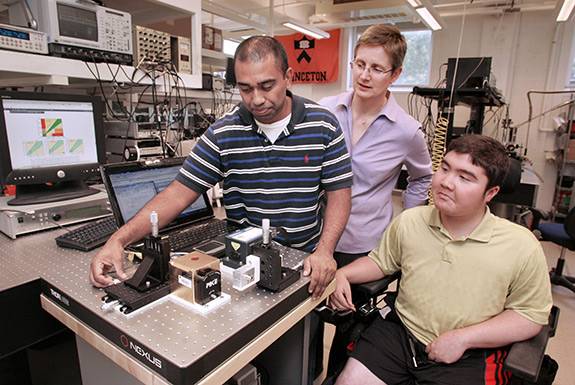 A new system developed by Princeton researchers uses a laser to allow diabetics to check their blood sugar without pricking their skin. Members of the research team included, from left, Sabbir Liakat, a graduate student in electrical engineering; Claire Gmachl, the Eugene Higgins Professor of Electrical Engineering; and Kevin Bors, who graduated in 2013 with a degree in electrical engineering. (Photos by Frank Wojciechowski for the Office of Engineering Communications)

When the team first started, the laser was an experimental setup that filled up a moderate-sized workbench. It also needed an elaborate cooling system to work. Gmachl said the researchers have solved the cooling problem, so the laser works at room temperature. The next step is to shrink it.

"This summer, we are working to get the system on a mobile platform to take it places such as clinics to get more measurements," Liakat said. "We are looking for a larger dataset of measurements to work with."

The key to the system is the infrared laser's frequency. What our eyes perceive as color is created by light's frequency (the number of light waves that pass a point in a certain time). Red is the lowest frequency of light that humans normally can see, and infrared's frequency is below that level. Current medical devices often use the "near-infrared," which is just beyond what the eye can see. This frequency is not blocked by water, so it can be used in the body, which is largely made up of water. But it does interact with many acids and chemicals in the skin, so it makes it impractical to use for detecting blood sugar.

Mid-infrared light, however, is not as much affected by these other chemicals, so it works well for blood sugar. But mid-infrared light is difficult to harness with standard lasers. It also requires relatively high power and stability to penetrate the skin and scatter off bodily fluid. (The target is not the blood but fluid called dermal interstitial fluid, which has a strong correlation with blood sugar.)

The breakthrough came from the use of a new type of device that is particularly adept at producing mid-infrared frequencies — a quantum cascade laser. 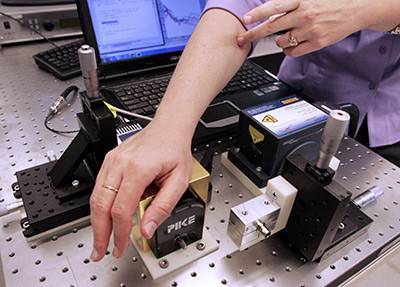 The new monitor uses a laser, instead of blood sample, to read blood sugar levels. The laser is directed at the person's palm, passes through skin cells and is partially absorbed by sugar molecules, allowing researchers to calculate the level of blood sugar.

In many lasers, the frequency of the beam depends on the material that makes up the laser — a helium-neon laser, for example, produces a certain frequency band of light. But in a quantum cascade laser, in which electrons pass through a "cascade" of semiconductor layers, the beam can be set to one of a number of different frequencies. The ability to specify the frequency allowed the researchers to produce a laser in the mid-infrared region. Recent improvements in quantum cascade lasers also provided for increased power and stability needed to penetrate the skin.

The researchers said their results indicated that the laser measurements readings produced average errors somewhat larger than the standard blood sugar monitors, but remained within the clinical requirement for accuracy.

"Because the quantum cascade laser can be designed to emit light across a very wide wavelength range, its usability is not just for glucose detection, but could conceivably be used for other medical sensing and monitoring applications," Gmachl said.

Besides Liakat and Gmachl, researchers included Kevin Bors, Class of 2013, Laura Xu, Class of 2015, and Callie Woods, Class of 2014, who worked on the project as undergraduate students majoring in electrical engineering; and Jessica Doyle, a teacher at Hunterdon Regional Central High School.

Support for the research was provided in part by the Wendy and Eric Schmidt Foundation, the National Science Foundation, Daylight Solutions Inc., and Opto-Knowledge Systems. The research involving human subjects was conducted according to regulations set by the Princeton University Institutional Review Board.