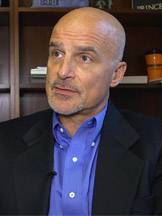 Princeton University researchers work on projects that have the potential to make a difference in people's lives. John Ritter (above), director of the Office of Technology Licensing at Princeton, discusses how students, faculty and staff work together on solving real-world problems.

Princeton University researchers work on projects that have the potential to make a difference in people's lives. John Ritter (above), director of the Office of Technology Licensing at Princeton, discusses how students, faculty and staff work together on solving real-world problems.

A non-invasive way to monitor blood sugar could help millions of diabetics check their condition without drawing blood. Princeton Professor Claire Gmachl is developing a technology to do just that, using a laser to measure blood sugar through the skin. It is one of many research projects at Princeton University that have the potential to benefit society.

The video below highlights three researchers who are striving to improve people's lives through innovations in science and engineering. Like most Princeton researchers, the three faculty members and their teams are strongly motivated to apply their discoveries to solving real-world problems.

"I wouldn't be a real scientist if I wasn't also just motivated by creating something new, by pushing the frontier of what is known," said Gmachl, the Eugene Higgins Professor of Electrical Engineering.

Gmachl and her team, which includes graduate and undergraduate students, are working on a device that measures blood sugar by directing a specialized laser at a person's wrist or palm. The laser light travels through the upper layers of the skin, where it is partially absorbed by the sugar molecules. By measuring how much of the laser light was absorbed, the researchers can determine how much sugar is in the blood.

This video highlights three Princeton researchers who are striving to improve people's lives through innovations in science and engineering. (Video by Danielle Alio, Office of Communications)

The researchers have demonstrated that the device works and are now refining the system. On a recent afternoon, Sabbir Liakat, a graduate student in electrical engineering, set up a station in the lunchroom at Princeton's School of Engineering and Applied Science with the help of fellow electrical engineering graduate students Loan Le and Mei Chai Zheng. He recruited volunteers to have their blood sugar measured by the laser device and by the traditional method of drawing blood. He will use the measurements to improve and validate the accuracy of the laser-based system.

The project is funded by the National Science Foundation and the Eric and Wendy Schmidt Transformative Technology Fund.

Computing with a wave of a hand

Princeton researchers are exploring ways in which humans can more effectively interact with computers. For example, Associate Professor of Electrical Engineering Naveen Verma and his team are developing technologies to make it possible to interact with computers or other electronic devices using hand gestures instead of typing on a keyboard.

The 3-D motion sensing of SpaceTouch is made possible by the addition of invisible electrodes to an everyday touchscreen. These electrodes generate an electric field in front of the touchscreen. When a hand moves through the electric field, information about the movement can be acquired by a specialized computer chip.

The possible applications for this technology are many, said Verma. For instance, a surgeon in an operating room could use SpaceTouch to scroll through a patient's X-rays. A cook could browse recipes on a surface embedded in an oven or refrigerator door. And three-dimensional sensing could create new possibilities for video games and educational tools.

"These are applications that we really didn't think of when we started working on this technology," Verma said. The SpaceTouch technology, which receives funding from the National Science Foundation, was developed by a team that includes electrical engineering graduate students Yingzhe Hu, Aoxiang Tang and Liechao Huang, as well as Professor of Electrical Engineering Sigurd Wagner and James Sturm, Princeton's Stephen R. Forrest Professor in Electrical Engineering.

Tackling the genes that cause cancer to spread

Students have many opportunities to be involved in basic research at Princeton. For example, graduate students and postdoctoral researchers in Professor Yibin Kang's laboratory are studying a gene called Metadherin that is involved in the spread, or metastasis, of cancer.

"One of the recent efforts that we have been doing for the past 10 years is to find out what kinds of tumors are aggressive based on their molecular features," said Kang, who is Princeton's Warner-Lambert/Parke-Davis Professor of Molecular Biology and receives funding for the research from the U.S. Department of Defense, the National Institutes of Health, the Breast Cancer Research Foundation, the Brewster Foundation and the Susan G. Komen organization. "And more importantly, [we want to] find the driver genes that make those tumors aggressive, because that's the first step toward treating it."

Metadherin gene overexpression is found in more than 40 percent of breast tumors and is linked to poor survival rates, indicating that it may be a good candidate as a diagnostic marker of aggressive breast cancer. The gene is associated with about 20 other cancer types as well, suggesting that a drug that blocks the gene's function could be useful against a variety of cancers.

"Princeton researchers are working to solve real-world problems in health, technology and the environment," said John Ritter, director of the Office of Technology Licensing at Princeton. "This is about research that can benefit society."