A study led by Princeton University researchers has revealed that the gene Metadherin — which is implicated in promoting the spread of breast cancer tumors — only stimulates tumor growth when the protein made by the gene interacts with a second protein known as SND1.

The researchers report in the journal Cancer Cell that Metadherin, or MTDH, also plays a role in the initial growth of tumors, which occurs much earlier than the gene's role in metastasis of the cancer to other parts of the body. In addition, the gene was not necessary for normal cell growth and development in mice, indicating that therapeutics that target this gene are likely to have a good safety profile, the researchers report.

"This is one of the first examples of a gene playing crucial roles in both the early and late steps of breast cancer progression," said senior corresponding author Yibin Kang, Princeton's Warner-Lambert/Parke-Davis Professor of Molecular Biology. "If we can find a molecule to block the function of MTDH and reverse the process, this could have a broad impact on many types of cancer."

A team led by researchers at Princeton University has found that a gene known as Metadherin, or MTDH, promotes the survival of tumor-initiating cells via the interaction with a second molecule called SND1. Mammary tissue was taken from mice (stained red for visualization) that were genetically engineered to develop breast cancer in the presence (left) or absence (right) of MTDH. The dark-pink, cloud-like structures indicate the initiation of mammary tumors, which were largely suppressed by loss of the MTDH gene. (Image courtesy of Yibin Kang, Department of Molecular Biology)

MTDH was initially identified as a gene that drives the spread, or metastasis, of mouse breast tumor cells by Dr. Ruoslahti at the Burnham Institute in 2004. Metadherin's role in human breast cancer was further underscored by a 2009 study from the Kang laboratory when researchers noted that the gene was highly expressed — meaning it produced MTDH proteins at abnormally high levels compared to normal cells — in more than 40 percent of tumor samples obtained from breast cancer patients. Subsequent studies in the Kang lab revealed that MTDH overexpression is associated with poor survival rates, increased risk of metastasis and resistance to chemotherapy.

Invasive breast cancer strikes 1 in 8 women and causes roughly 40,000 deaths each year in the United States. About 20 percent of women with breast cancer go on to develop tumors that spread throughout body, are resistant to chemotherapy, and are often fatal.

To carry out the current study, first author Liling Wan, who earned her doctorate from Princeton this year, conducted experiments on mice that were genetically modified to lack the MTDH gene. "We observed normal development and growth in mice that lacked the MTDH gene, and therefore determined that the gene is non-essential for normal life," Wan said.

Wan and colleagues then looked at mice that were genetically engineered to develop breast cancer and found that the mice without MTDH had significantly fewer tumors and as little as a tenth of the tumor burden observed in mice with the gene. 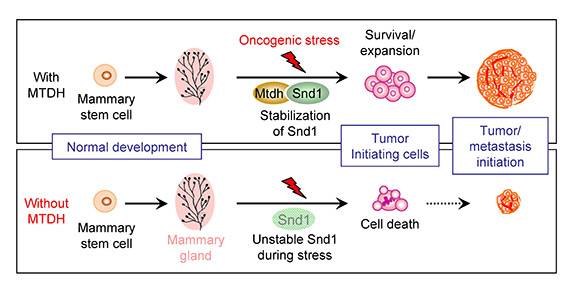 The figure depicts the role of MTDH and SND1 interaction in breast tumor initiation. Under stress conditions during the formation of tumors (top), MTDH interacts with SND1 and protects it from degradation. This allows cancer stem cells, the root of tumors, to survive and expand, eventually giving rise to large tumors. When MTDH was genetically deleted (bottom), the normal development of mammary glands was unaffected. However, without the interaction with MTDH, SND1 becomes unstable under oncogenic stress and is no longer able to support cancer stem cells. These cells undergo stress-induced cell death and lose the ability to initiate tumors. (Image courtesy of Yibin Kang, Department of Molecular Biology)

Further experiments revealed that only when MTDH is bound to its partner protein, SND1, does the tumor-initiating and metastatic behavior ensue. Under stress conditions during the formation of tumors, MTDH protects SND1 from degradation. This allows tumor-initiating cells, the root of tumors, to survive and expand, eventually giving rise to large tumors. When MTDH was genetically deleted, SND1 became unstable under oncogenic stress and was no longer able to support tumor initiation. These cells underwent stress-induced cell death and lost the ability to initiate tumors. Thus, when Wan knocked out either the MTDH gene or the SND1 gene, tumors did not form or were very small.

The team also looked at MTDH and SND1 in samples of human breast tumors supplied by collaborators at the Rutgers Cancer Institute of New Jersey led by Bruce Haffty, professor and chair of radiation oncology at the Cancer Institute of New Jersey, Robert Wood Medical School and New Jersey Medical School, all at Rutgers University. The team observed a strong correlation of MTDH and SND1 expression in human tumors, indicating significant clinical relevance of this molecular partnership.

"Our goal is to someday have a drug that could improve, cure or control breast cancer by targeting the particular pathways that are associated with metastasis and the progression of disease," Haffty said. "Although these results are too early to have an immediate impact on cancer treatment, they are very exciting."

Eileen White, associate director of basic science at the Cancer Institute, who is familiar with the work but did not directly participate in it, said, "This research found that the proteins MTDH and SND1 were highly expressed in a battery of different breast cancers, so interfering with these two proteins might have anti-cancer activity in a spectrum of breast cancers."

To learn more about the physical nature of the interaction of MTDH with SND1 and to find a way to block this cancer-promoting interaction, the Kang lab enlisted the help of researchers led by Yongna Xing at the University of Wisconsin-Madison. The team used X-ray crystallography — a technique that enables researchers to see structures that are too small to see with microscopes — to visualize the two proteins when bound to each other.

The researchers found that MTDH has two finger-like projections that stick into two pockets on the surface of SND1. "They are like two fingers sticking into the holes of a bowling ball," said Kang. The discovery of the binding gave rise to ideas about how to block it and thus block tumor initiation.

The team is currently screening small molecules that could block the binding of MTDH to SND1 and curtail its tumor-promoting functions. "MTDH stabilizes SND1 and that is the lifeboat for the so-called cancer stem cells that initiate primary tumors and metastasis," Kang said. "Without MTDH, SND1 will be degraded and the seeds of cancer will be wiped out."

Additional research from the Kang lab and other researchers around the world has revealed that Metadherin gene overexpression is seen in about 20 cancer types, indicating that an MTDH-blocking strategy may be able to overcome a variety of cancers.

The paper, "MTDH-SND1 Interaction Is Crucial for Expansion and Activity of Tumor-Initiating Cells in Diverse Oncogene- and Carcinogen-Induced Mammary Tumors," was published online June 26 by Cancer Cell. The work was supported by grants from the Department of Defense (grant no. BC123187), the Brewster Foundation, Komen for the Cure and the National Institutes of Health (grant no. R01CA134519). This research was also supported by the Transgenic/Knockout, Tissue Analytic Service and Flow Cytometry Shared Resources of the Cancer Institute of New Jersey (grant no. P30CA072720).