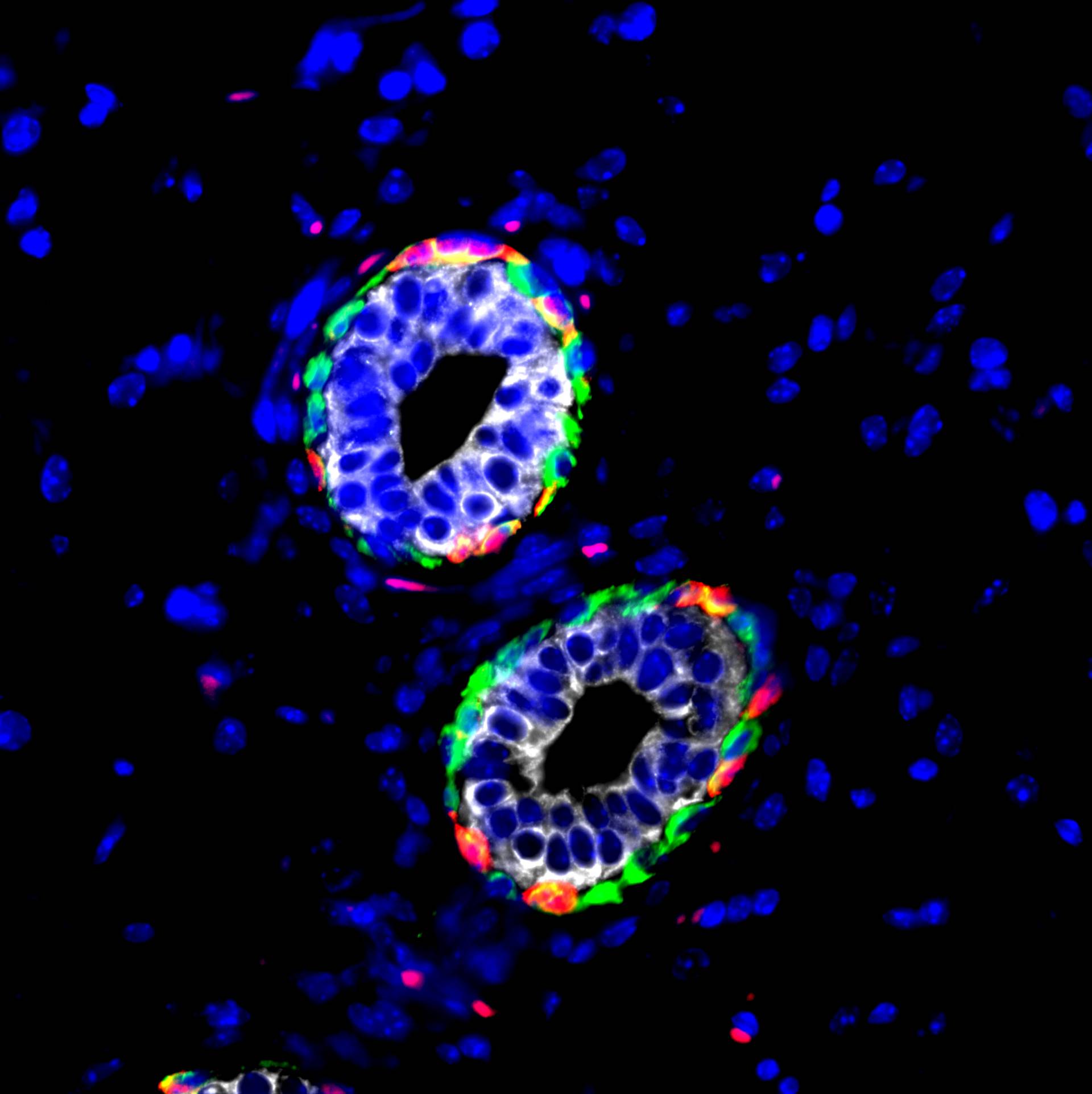 Researchers in the laboratory of Yibin Kang, the Warner-Lambert/Parke-Davis Professor of Molecular Biology, have made new discoveries about how an immune cell known as the macrophage, which normally fights infection by swallowing foreign invaders, nurtures mammary gland stem cells through a chemical signaling molecule. The study may provide clues about the roles of macrophages in breast cancer progression.This image shows the cross-section of a mouse mammary gland duct taken with a confocal microscope. The mammary stem cells are labeled in pink.

A new study finds that one of the toughest characters in the immune system, the macrophage, has a nurturing side, at least when it comes to guarding the developing breast.

The study published online this week in the journal Science found that macrophages play an important role in maintaining the mammary gland's stem cell niche, a sort of nursery for the precursors of milk-producing cells in the breast.

"Learning more about the factors that keep mammary stem cells alive and healthy may provide insights into the development of breast cancer when such regulation goes awry," said Yibin Kang, the Warner-Lambert/Parke-Davis Professor of Molecular Biology at Princeton University and an associate director of the Rutgers Cancer Institute of New Jersey, who led the international team that made the discovery. "Our study establishes macrophages as important components of the mammary stem cell niche," he said.

Stem cells are cells that have the potential to mature, or differentiate, into several different types of cells. Mammary stem cells shepherd breast development during puberty and are active during pregnancy and lactation.

The team found that the macrophage, a type of white blood cell whose name translates to "big eater" because it fights infection by engulfing and digesting foreign invaders, helps create a special environment, known as a stem-cell niche. The macrophage keeps stem cells in their premature state and able to duplicate and differentiate into mature cells when needed.

Stem cells come in various types, from ones that are already committed to develop into certain organs as in the mammary glands, to ones that can form nearly any cell in the body. These cells may also become cancerous, leading to tumors and eventually to the spread of cancer to other organs.

Mammary gland stem cells drive the development of the breast during puberty and pregnancy. The left panel shows a mammary gland duct that is normal (WT) or is missing the Dll1 gene (Dll1cKO). The middle panel shows the normal duct stained so that the mammary stem cells (blue ovals) and macrophages (brown ovals) are visible. The right panel illustrates how the mammary stem cells (pink) communicate with macrophages (brown), through the binding of Dll1 to Notch receptors and the involvement of Wnt molecules.

These signaling mechanisms involve a protein called Notch, which acts as a receptor for a signaling molecule called Dll1. Previous research in the Kang lab found that mammary stem cells make a lot of Dll1. In the current study, researchers knocked out the Dll1 gene in mice and found that there is a significant delay in breast development during puberty as well as delayed breast expansion during pregnancy and lactation. Furthermore, the number of mammary stem cells was reduced both during mammary gland development and during pregnancy. Meanwhile, mice with the Dll1 gene intact contained mammary glands with a greater ability to regenerate and to differentiate into mature mammary cells compared to the Dll1-knockout mice.

The researchers also found that the presence of Dll1 is linked to the expression of genes for another signaling pathway involving a molecule called Wnt. The expression of Dll1 caused the macrophages to express genes for Wnt3, 10 and 16, which further enhanced the stem-cell behavior of the mammary stem cells. When the researchers used genetic or chemical methods to inactivate the macrophages in the mammary glands of mice, the mammary stem cell activity decreased.

The first author and co-corresponding author on the study was Rumela Chakrabarti, who was a postdoctoral research associate at Princeton and is now an assistant professor of biomedical sciences at the University of Pennsylvania School of Veterinary Medicine.

"The 'Notch-Wnt crosstalk' that occurs at the mammary stem cell niche is crucial for the development of the mammary gland," Chakrabarti said, "and this crosstalk may have implications in breast cancer as both these signaling pathways are aberrantly increased in breast cancer."

Jeffrey Rosen, who is the C.C. Bell Professor, Vice-Chair of Molecular and Cellular Biology, and Distinguished Service Professor at Baylor College of Medicine, and who was not directly involved in the study, said, "The study by Yibin Kang and colleagues helps expand our knowledge about the role of macrophages in mammary gland development first demonstrated by other research groups almost two decades ago and more recently by researchers who found that macrophages influence stem-cell activity in the mammary gland.

"The study also raises several questions about the specific roles of multiple Wnt molecules expressed in mammary cells and surrounding cells as well as in tissue-resident macrophages in mammary stem cells," he said. "These studies on normal mammary gland development may provide important clues about the roles of macrophages in breast cancer progression."