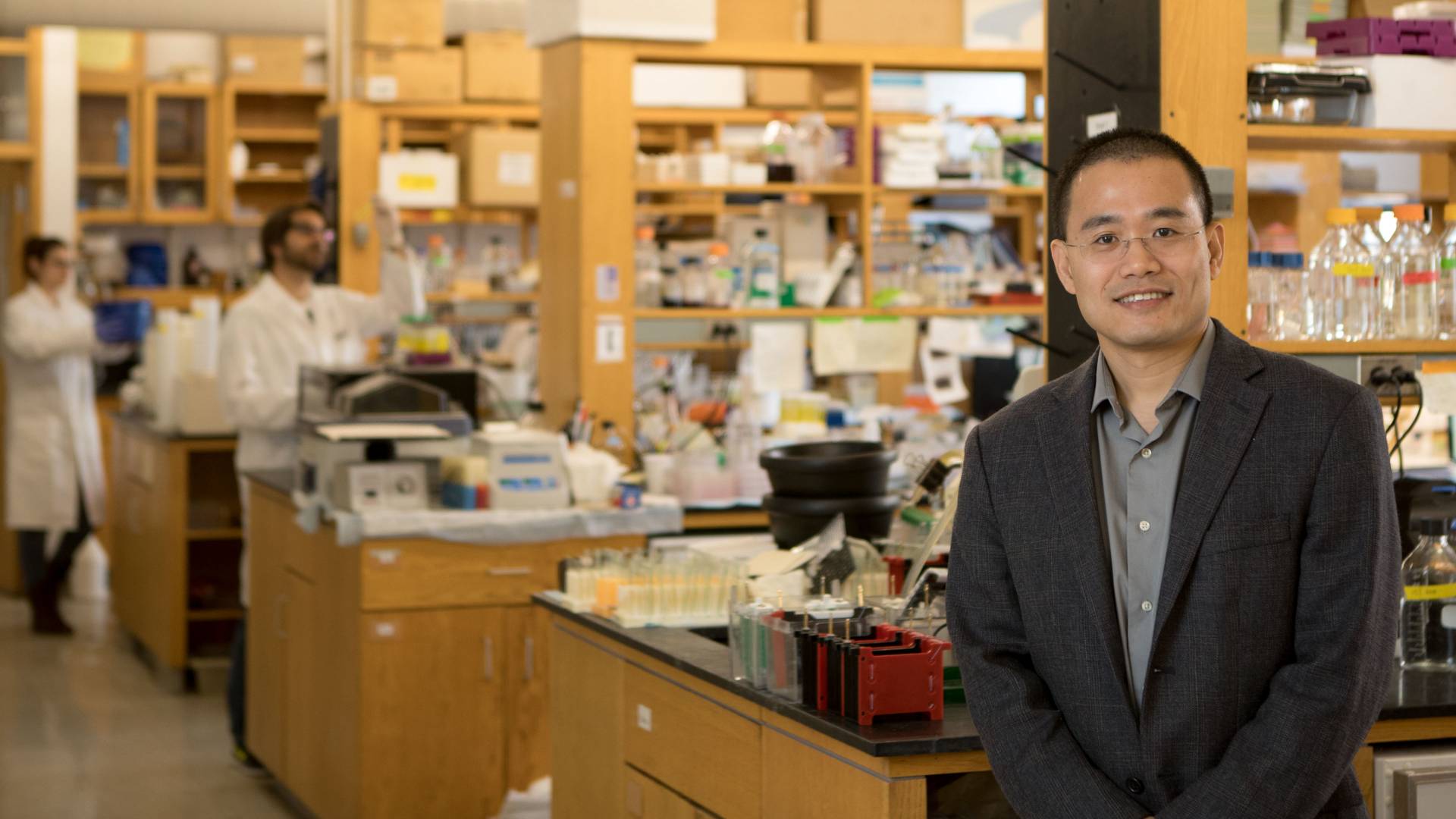 In the ongoing battle between cancer and modern medicine, some therapeutic agents, while effective, can bring undesirable or even dangerous side effects. “Chemo saves lives and improves survival, but it could work much better if you eliminate unwanted side effects from it,” said Princeton University cancer researcher Yibin Kang, the Warner-Lambert/Parke-Davis Professor of Molecular Biology.

To explain his new weapon in the war against the metastatic spread of cancer to bone, Kang uses a movie metaphor: "Independence Day."

In the 1996 blockbuster, the people of Earth fight back against alien attackers, deploying a computer virus to disable the shields guarding the attackers' spaceships. A new antibody, developed through a collaboration of Kang's lab with drug company Amgen, works similarly. Antibody 15D11 fights bone metastasis by undermining cancer's defense strategy and allowing chemotherapy to work.

“The Kang Lab primarily studies breast cancer metastasis — how cancer cells spread from the breast to other organs — because what kills the vast majority of cancer patients is not the original tumor but rather metastasis,” said Hanqiu Zheng, a former postdoctoral fellow with Kang and the lead author of the study published Dec. 11 in the journal Cancer Cell, who is now an assistant professor at Tsinghua University in China.

“Our project specifically looked at bone metastasis and how cancer cells and bone cells ‘talk’ to each other through molecular signaling,” said Rebecca Tang, Class of 2016, who worked with Kang for three years and is now a medical student at the University of Pennsylvania. “Previous work in the lab had shown that a molecule called Jagged1 is a critical part of this crosstalk and makes it easier for breast cancer cells to metastasize to bone. We therefore wanted to see if we could prevent or reduce metastasis by using an antibody called 15D11 to block Jagged1.” 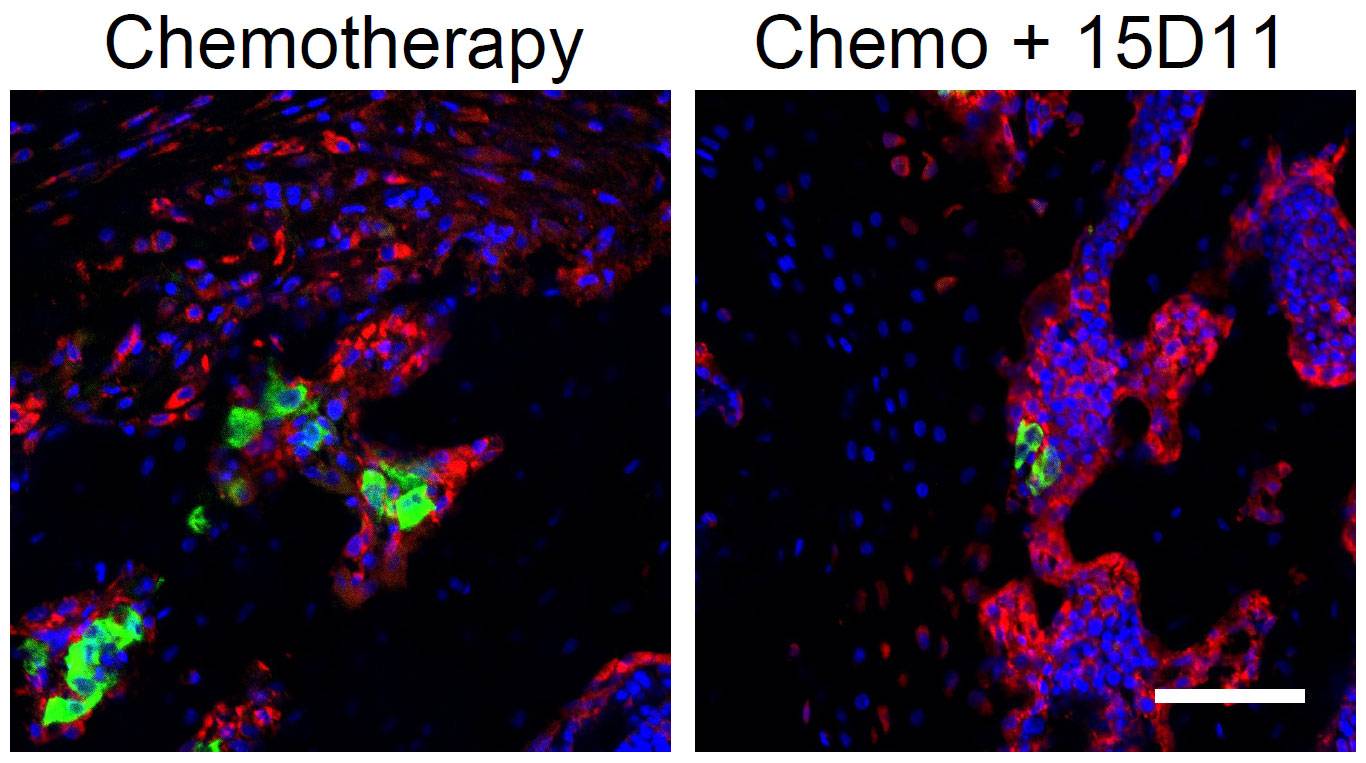 These fluorescent images show bone metastases (green) that were treated with chemotherapy alone (left) or in combination with antibody 15D11 (right). Osteoblasts (bone rebuilders, in red), often surround and protect cancer cells (green) when not targeted by 15D11. Nuclei of normal and cancer cells are shown in blue. The scale bar in the bottom right represents 40 millimeters.

Healthy bones are constantly being replenished in a two-part process: Osteoclasts (scrubbers) remove a layer of bone, and then osteoblasts (rebuilders) replenish the bone with new material.

“Just like if you have a bad driveway, and you use an excavator to remove the old surface and then you lay a new layer of it — that's how you maintain the integrity and strength of the bone tissue,” Kang said.

But in cancer patients, this system can be hijacked by the bone tumors, he said. The scrubbers can go into overdrive, removing bone tissue until almost nothing is left, or the rebuilders can be tricked into fostering the growth of tumor cells and protecting them during chemotherapy.

“Tumors are essentially hiding in the cradles of the osteoblasts,” Kang said.

Initially, the researchers thought that 15D11 would only work against tumors that have a high expression of Jagged1, but then they found something surprising. When they paired their antibody with chemotherapy, it worked much better than either treatment alone, even in tumors without high level of Jagged1.

“There's a synergy in combining the two agents,” Zheng said. “Chemo alone is usually not very effective against bone metastasis.” It can produce an initial reduction in the tumor burden, but only until it starts to induce Jagged1 expression in the rebuilder cells (osteoblasts), which the tumors can use as a shield.

In most bone metastasis treatment, this is when tumors become resistant to chemotherapy and the treatment stops working. But because 15D11 specifically targets Jagged1, the antibody eliminates the protective effect of the rebuilders, allowing chemotherapy to continue keeping cancer at bay.

To confirm that Jagged1 from osteoblasts protect cancer cells in bone, Kang collaborated with Dr. Brendan Lee at Baylor College of Medicine to create a genetically modified mouse strain that expresses Jagged1 in bone cells, making the mice much more susceptible to the growth of breast cancer cells in bone. 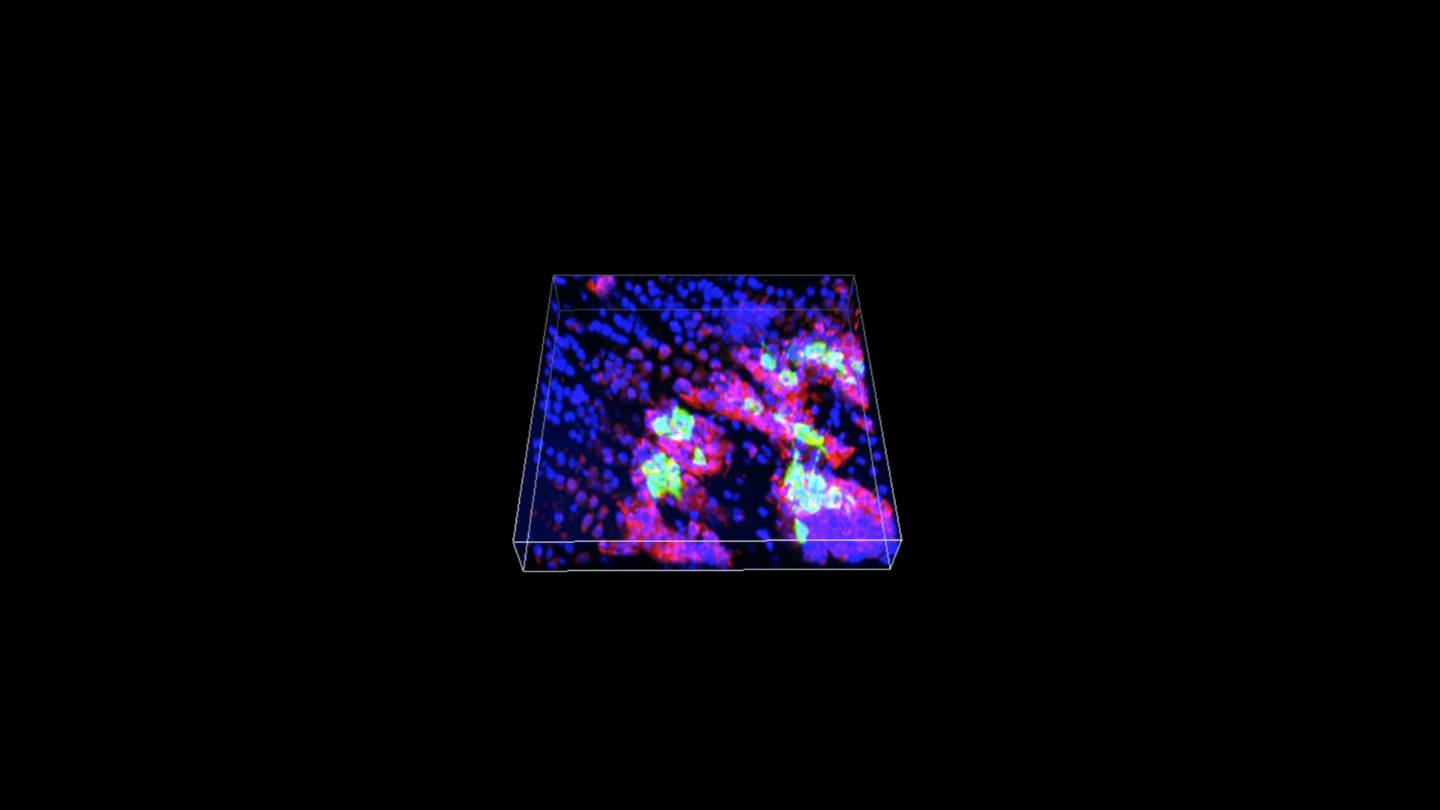 "This is a remarkable response that we have never observed in any of our previous tests of therapeutic agents against bone metastasis in mice," Kang said. While the researchers haven’t examined other cancers that also frequently metastasize to bone, such as prostate cancer, Kang said he suspects that the antibody would work on them as well.

Kang hopes for a rapid path toward getting the antibody ready for human trials, he said. As the antibody is already fully human, having been created in a “humanized mouse” genetically engineered by Amgen, the next step is clinical trials in patients, if Amgen or another pharmaceutical partner chooses to move forward.

“This work represents a major step forward,” said Dr. Russell S. Taichman, associate dean for research at the University of Michigan School of Dentistry, who was not involved in this study. “Developing a new therapeutic target (the antibody), which may be useful in people, may change the clinical landscape [for] patients with early disease and those who develop outright metastasis. … Once again, the Kang group has hit it far out of the park!”

This research was supported by a Rutgers Cancer Institute of New Jersey (RCINJ) Research Development Award; the Brewster Foundation; and grants from METAvivor Research and Support (AWD1004691), the U.S. Department of Defense (BC123187), the National Institutes of Health (R01CA134519 and R01CA141062), and Amgen to Kang; and postdoctoral fellowships from Susan G. Komen to Zheng (KG111164) and Minhong Shen (PDF17332118); from the U.S. Department of Defense to Guangwen Ren (BC123284); and from the New Jersey Commission on Cancer Research to Shen (DFHS15PPCO21). This research was also supported by the Preclinical Imaging Facility and Pre-clinical Imaging and Flow Cytometry Shared Resources of the RCINJ (P30CA072720). 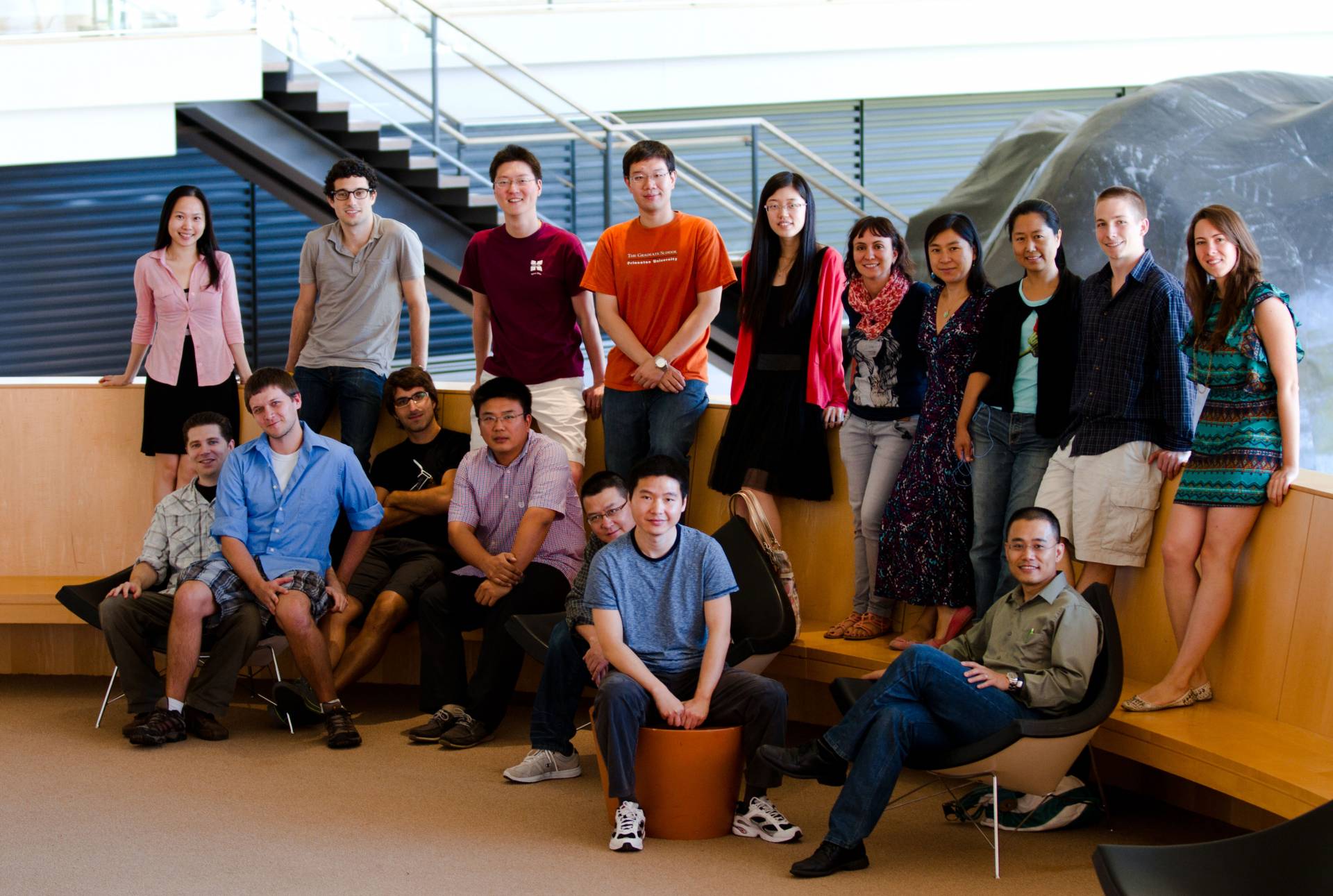