by Tara Thean for the Office of the Dean for Research

A class of molecules called microRNAs may offer cancer patients two ways to combat their disease.

Researchers at Princeton University have found that microRNAs — small bits of genetic material capable of repressing the expression of certain genes — may serve as both therapeutic targets and predictors of metastasis, or a cancer's spread from its initial site to other parts of the body. The research was published in the journal Cancer Cell.

MicroRNAs are specifically useful for tackling bone metastasis, which occurs in about 70 percent of patients with late-stage cancer, said senior author Yibin Kang, Princeton's Warner-Lambert/Parke-Davis Professor of Molecular Biology. During bone metastasis, tumors invade the bone and take over the cells known as osteoclasts that normally break down old bone material as new material grows. These cells then go into overdrive and dissolve the bone far more quickly than they would during normal bone turnover, which leads to bone lesions, bone fracture, nerve compression and extreme pain. 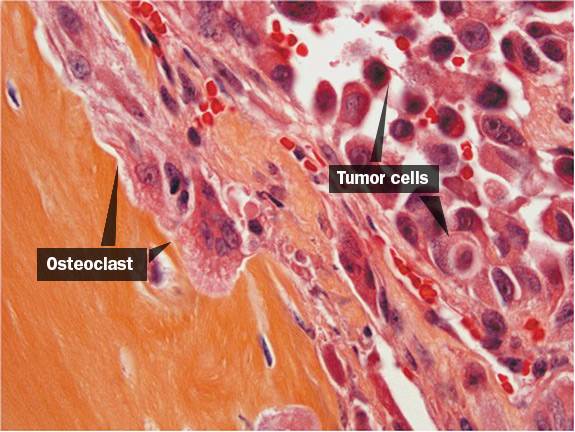 Researchers at Princeton University have found that microRNAs — small bits of genetic material capable of repressing the expression of certain genes — may serve as both therapeutic targets and predictors of metastasis, or a cancer’s spread from its initial site to other parts of the body. In this image, breast cancer cells (right) spread toward the hindlimb bone (left), using the host's own bone-destroying cells (osteoclasts) to continue their advance. (Image courtesy of Yibin Kang, Department of Molecular Biology)

"The tumor uses the osteoclasts as forced labor," explained Kang, who is a member of the Rutgers Cancer Institute of New Jersey and adviser to Brian Ell, a graduate student in the Princeton Department of Molecular Biology and first author on the study. Kang and Ell worked with scientists at the IRCCS Scientific Institute of Romagna for the Study and Treatment of Cancer in Meldola, Italy, and the University Cancer Center in Hamburg, Germany. In this video, Ell describes his research on using small RNAs for treating and monitoring bone metastasis.

MicroRNAs can reduce that forced labor by inhibiting osteoclast proteins and thus limiting the number of osteoclasts present. Ell and his colleagues observed that bones exhibiting metastasis developed significantly fewer lesions when injected with microRNAs. Their findings suggest that microRNAs could be effective treatment targets for tackling bone metastasis — and also may help doctors detect the cancer's spread to the bone, Kang said. Samples collected from human patients revealed a strong correlation between elevated levels of another group of microRNAs and the occurrence of bone metastasis, the researchers found.

In a commentary accompanying the study in Cancer Cell, researchers who were not associated with the work wrote, "This [study] represents significant insight into our understanding of the organ-specific function and pathological activity of miRNAs, which could lead to improvements in diagnosis, treatment and prevention of bone metastases and elucidates a unique aspect of the bone microenvironment to support tumor growth in bone." The commentary was authored by David Waning, Khalid Mohammad and Theresa Guise of Indiana University in Indianapolis.

Kang said he ultimately hopes to extend mice experimentation to clinical trials. "In the end, we want to help the patients," he said.

The paper, Tumor-Induced Osteoclast miRNA Changes as Regulators and Biomarkers of Osteolytic Bone Metastasis, was published in Cancer Cell on Oct. 14.

Kang and Ell were supported by grant KG110464 from the Komen for the Cure, grant BC123187 from the U. S. Department of Defense, grants R01CA134519 and R01CA141062 from the National Institutes of Health, the Brewster Foundation. Their research was also supported by the Preclinical Imaging and Flow Cytometry Shared Resources of the Cancer Institute of New Jersey (P30CA072720). Their collaborators were supported by the Champalimaud Foundation, the European Research Council, the Deutsche Forschungsgemeinschaft and the German Minister of Education and Research.