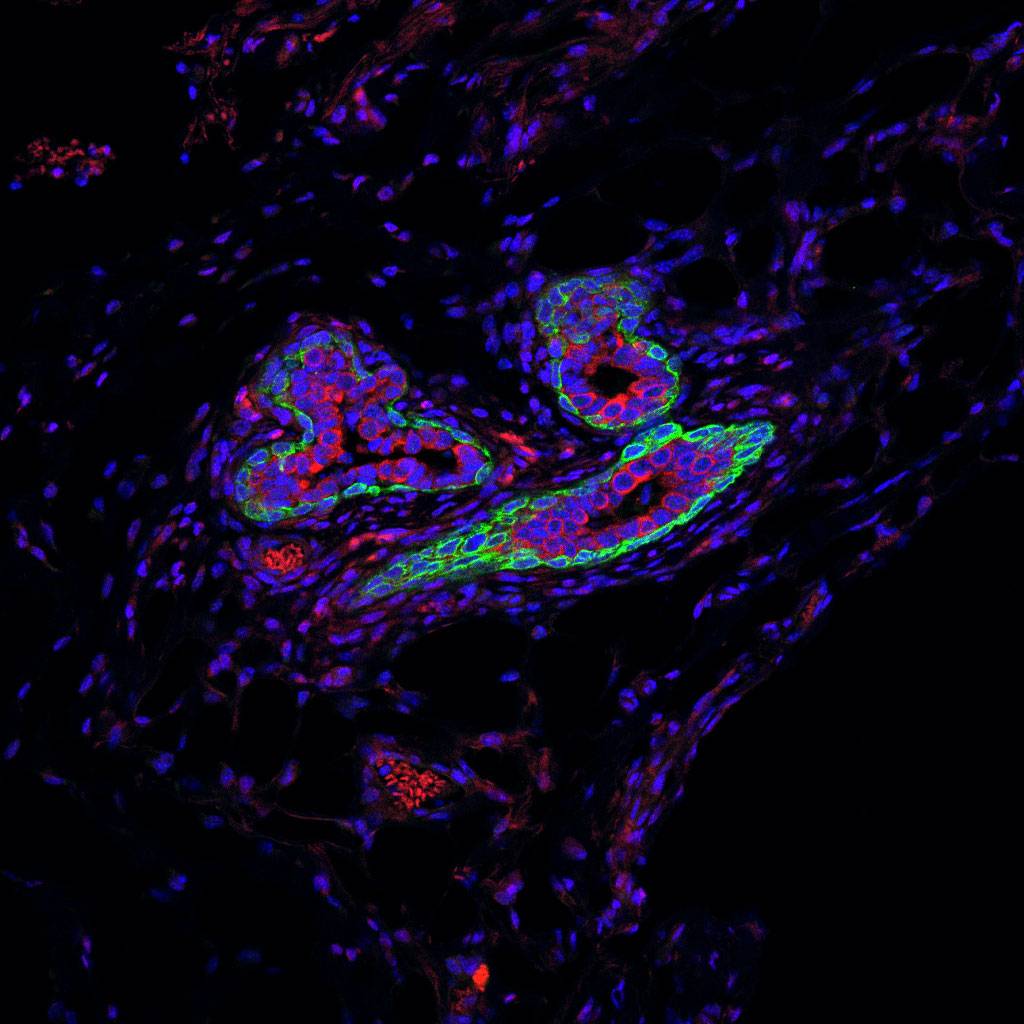 The Department of Molecular Biology

Researchers from Princeton University's Department of Molecular Biology have identified a small RNA molecule that helps maintain the activity of stem cells in both healthy and cancerous breast tissue. Above, the microscopic image shows different cell types in the normal mammary ducts of a mouse. The luminal cells (red) are milk-producing cells and the basal cells (green) have contractile functions, but also are responsible for regenerating the mammary gland, as they contain the majority of mammary gland stem cells. These stem cells, located in the outer layer of the gland, are exposed to microenvironmental factors and interact with various immune cells, including macrophages, in the mammary gland.

Researchers from Princeton University’s Department of Molecular Biology have identified a small RNA molecule that helps maintain the activity of stem cells in both healthy and cancerous breast tissue. The study, which will be published in the June issue of Nature Cell Biology, suggests that this "microRNA" promotes particularly deadly forms of breast cancer and that inhibiting the effects of this molecule could improve the efficacy of existing breast cancer therapies.

Stem cells give rise to the different cell types in adult tissues but, in order to maintain these tissues throughout adulthood, stem cells must retain their activity for decades. They do this by "self-renewing" — dividing to form additional stem cells — and resisting the effects of environmental signals that would otherwise cause them to prematurely differentiate into other cell types.

Many tumors also contain so-called "cancer stem cells" that can drive tumor formation. Some tumors, such as triple-negative breast cancers, are particularly deadly because they contain large numbers of cancer stem cells that self-renew and resist differentiation.

To identify factors that help non-cancerous mammary gland stem cells (MaSCs) resist differentiation and retain their capacity to self-renew, Yibin Kang, the Warner-Lambert/Parke-Davis Professor of Molecular Biology, and colleagues searched for short RNA molecules called microRNAs that can bind and inhibit protein-coding messenger RNAs to reduce the levels of specific proteins. The researchers identified one microRNA, called miR-199a, that helps MaSCs retain their stem-cell activity by suppressing the production of a protein called LCOR, which binds DNA to regulate gene expression. The team showed that when they boosted miR-199a levels in mouse MaSCs, they suppressed LCOR and increased normal stem cell function. Conversely, when they increased LCOR levels, they could curtail mammary gland stem cell activity.

Kang and colleagues found that miR-199a was also expressed in human and mouse breast cancer stem cells. Just as boosting miR-199a levels helped normal mammary gland stem cells retain their activity, the researchers showed that miR-199a enhanced the ability of cancer stem cells to form tumors. By increasing LCOR levels, in contrast, they could reduce the tumor-forming capacity of the cancer stem cells. In collaboration with researchers led by Zhi-Ming Shao, a professor at Fudan University Shanghai Cancer Center in China, Kang's team found that breast cancer patients whose tumors expressed large amounts of miR-199a showed poor survival rates, whereas tumors with high levels of LCOR had a better prognosis.

The microRNA plays a similar role during tumorigenesis, protecting breast cancer stem cells from the effects of interferons secreted by immune cells present in the tumor. "This is a very nice study linking a normal and malignant mammary gland stem cell program to protection from immune modulators," said Michael Clarke, the Karel H. and Avice N. Beekhuis Professor in Cancer Biology at Stanford School of Medicine, Institute of Stem Cell Biology and Regenerative Medicine, who first discovered breast cancer stem cells but was not involved in this study. "It clearly has therapeutic implications for designing strategies to rationally target the breast cancer stem cells with immune modulators."

Toni Celià-Terrassa, an associate research scholar in the Kang lab and the first author of the study, said, "This study unveils a new property of breast cancer stem cells that give them advantages in their interactions with the immune system, and therefore it represents an excellent opportunity to exploit for improving immunotherapy of cancer."

"Interferons have been widely used for the treatment of multiple cancer types,” Kang said. "These treatments might become more effective if the interferon-resistant cancer stem cells can be rendered sensitive by targeting the miR-199a-LCOR pathway."

This work was supported by a Susan G. Komen Fellowship to Toni Celià-Terrassa (PDF15332075) and grants from the Brewster Foundation, the Breast Cancer Research Foundation, the U.S. Department of Defense (BC123187) and the National Institutes of Health (R01CA141062) to Kang's laboratory.