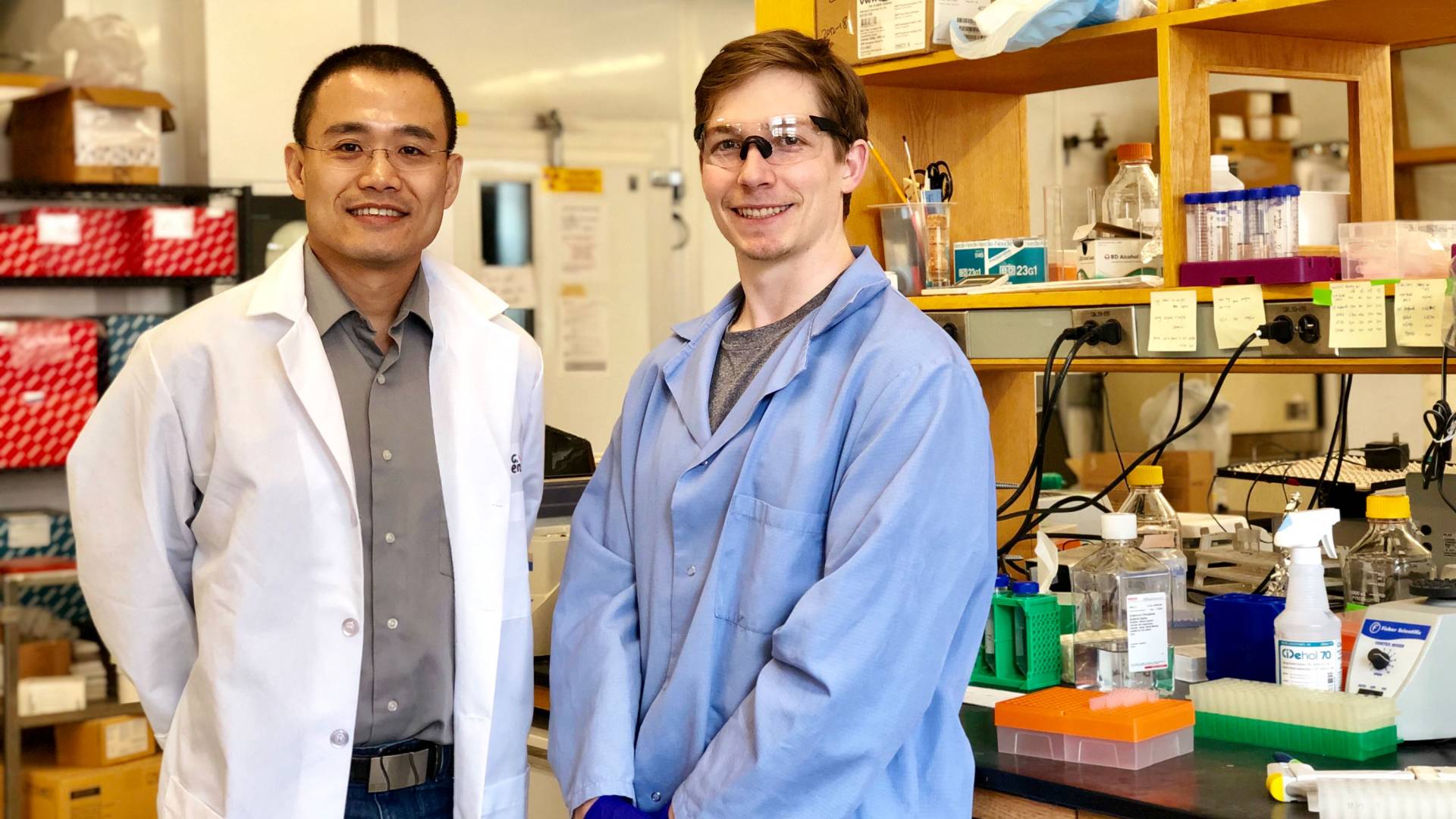 Yibin Kang, left, and Mark Esposito, right, led a recent study that has discovered a factor that promotes the spread of cancers to bone, opening the way toward treatments that could mitigate cancer’s ability to metastasize.

A Princeton-led team of researchers has discovered a factor that promotes the spread of cancers to bone, opening the way toward treatments that could mitigate cancer’s ability to colonize bone. The study by Mark Esposito, Yibin Kang and colleagues appears in the April 15 issue of Nature Cell Biology.

“A large majority of human cancers are carcinomas derived from epithelial cells,” said Kang, a professor of molecular biology and the corresponding author of the paper. Carcinomas grow from a single mutated cell into a tumor, a solid mass of cancerous cells. As long as it remains contained at its site of origin, a tumor may disrupt the function of its host organ, but it only indirectly affects the rest of the body. However, cancers will often metastasize — that is, spread — to colonize other, distant tissues. Breast cancers, for example, commonly metastasize to lung, liver, brain and bone. Patients whose tumors have metastasized suffer greater systemic disruption and are much less likely to achieve a successful cure. Most deaths from cancer occur after metastasis, so it is important to understand what signals control or promote this process. Kang’s team examined the motility, or ability to move, of the epithelial cells that line the surfaces within the body, including skin, organs and blood vessels.

“Epithelial cells are normally not motile, but cancer cells undergo a process called epithelial-mesenchymal transition, or EMT, to become more migratory and escape from the primary tumor,” explained Kang. “Once they reach a distant organ, they must then go through the reverse process, mesenchymal-epithelial transition, or MET, to revert to the epithelial state in order to proliferate and form a metastatic colony.” 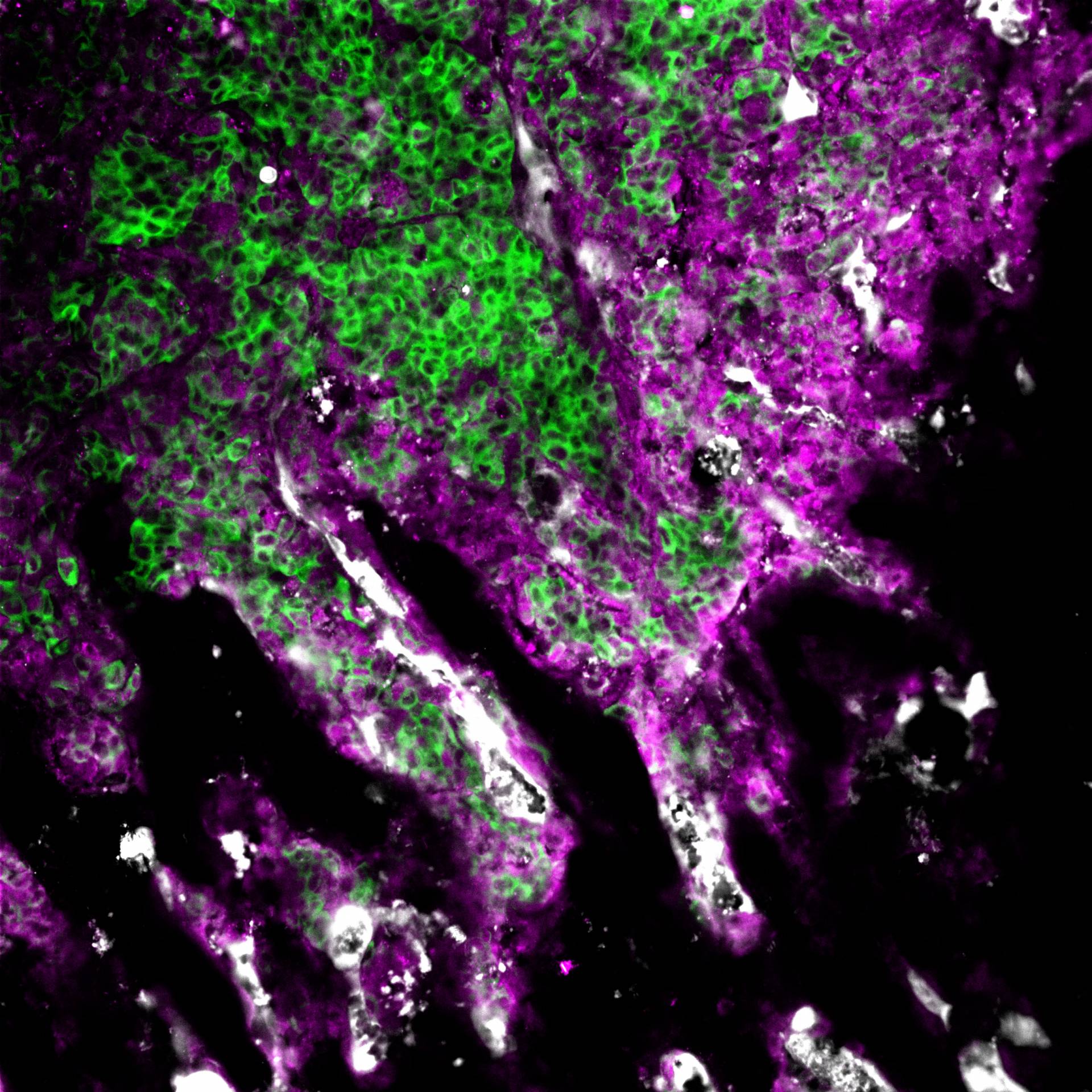 Although EMT is well studied, the signals that drive MET are still poorly understood. It’s thought that MET is triggered by interactions between surface proteins on cancer cells and corresponding ligands or receptors found on the cells that naturally reside in the tissue being colonized. While studying signals that drive cancer metastasis and MET in bone, the Princeton researchers’ attention was drawn to an adhesion molecule called E-selectin.

E-selectin is found on the cells that line capillaries throughout the body, where it aids in recruitment of immune cells from blood during inflammation by giving them something to latch onto. It has long been suspected that E-selectin may facilitate the recruitment of cancer cells to secondary organs in a similar manner during metastasis, but no evidence of this has yet been found. In fact, mice lacking E-selectin entirely are not protected from lung colonization by breast cancer cells. This may be partly due to the distribution of E-selectin; the researchers found that E-selectin is more strongly expressed in bone vasculature than in the lung. Accordingly, they observed that mice lacking E-selectin are less susceptible to bone metastasis than are normal animals. Importantly, however, E-selectin in bone is a prominent part of the environmental niche that supports the early differentiation and growth of specialized immune cells and blood cells.

“Our study shows this environment is hijacked by metastasizing cancer cells so that E-selectin nurtures the cancer cells in their early phases of growth,” said Esposito, a postdoctoral fellow in Kang’s lab and the lead author on the group’s paper.

“What we found in this study is when tumor cells bind to bone vascular E-selectin, they undergo MET, and at the same time exhibit elevated signaling through the Wnt pathway, to enhance their cancer stem cell properties and promote new tumor growth,” said Kang.

How does bone E-selectin stimulate these responses in cancer cells?

“E-selectin binding requires special modification of its ligand by a unique type of sugar decoration catalyzed by a family of enzymatic proteins,” said Kang. Binding of E-selectin to this specially modified protein on the cancer cell is what stimulates MET and supports the cancer cell’s growth. The identity of this ligand is still unknown, so further research on this subject is needed.

Regardless of its identity, it’s already clear that this ligand strongly influences cancer outcomes. Analysis of human breast cancer cohorts showed that elevated expression of proteins that perform the sugar modification is associated with a greater chance of metastatic relapse. Furthermore, the researchers identified the protein Glg1, which they think may aid in the ligand’s maturation or surface expression, as a prognostic marker for bone metastasis. These findings presented a tantalizing possibility: that interfering with the ability of the ligand to interact with E-selectin might reduce bone metastasis.

To investigate this, Kang’s group used a drug called Uproleselan, a sugar-mimetic compound that blocks E-selectin binding. Experiments with Uproleselan showed that it significantly reduces bone metastasis and confers a survival advantage on mice injected with human breast cancer cells.

“Although still untested in the clinic, the mouse experiments done in this study show the therapeutic benefit of such … compounds to reduce bone metastasis,” said Kang.