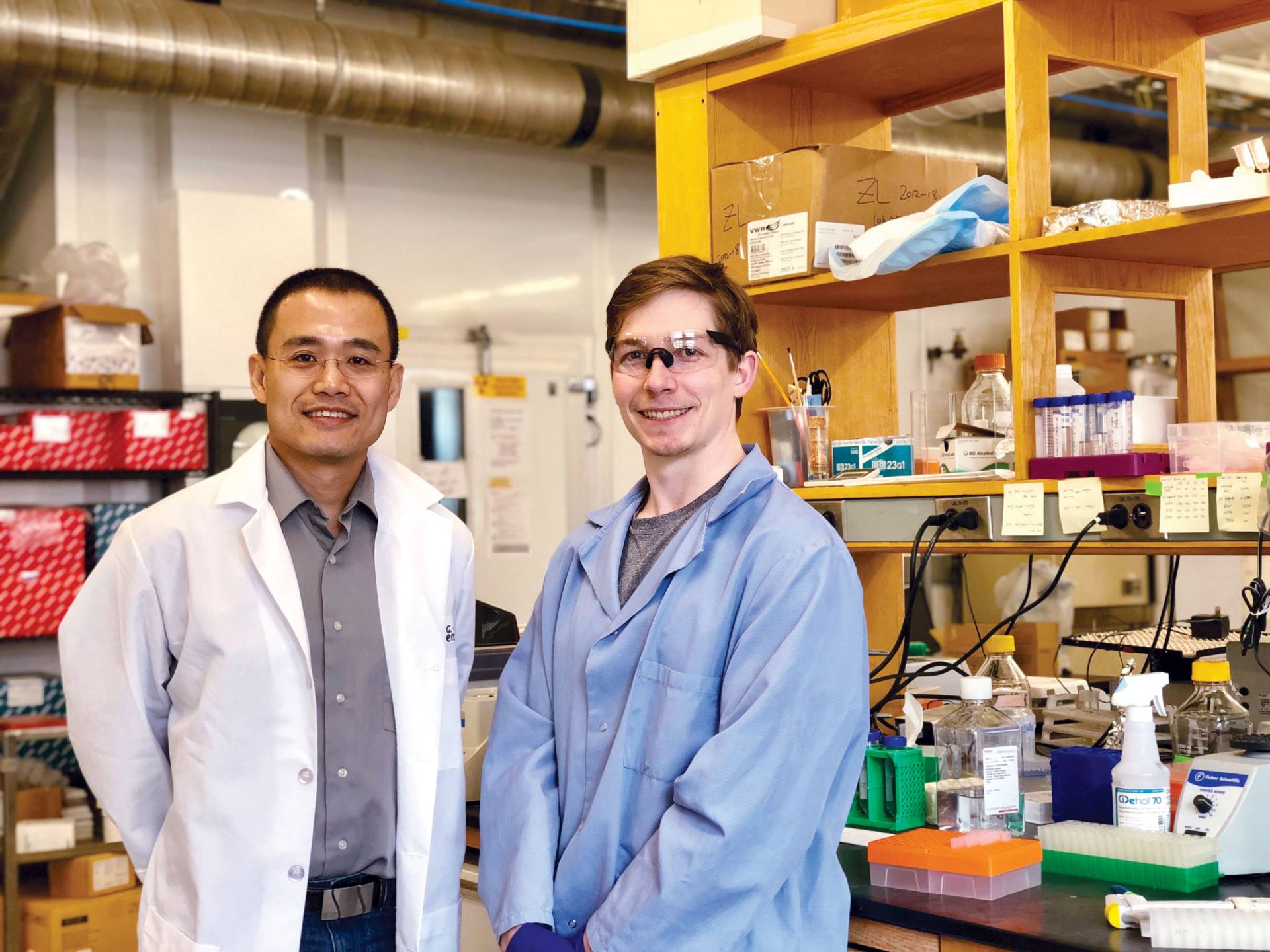 Princeton cancer researchers Yibin Kang (left) and Mark Esposito, seen here in April 2019, discovered a new, still-unnamed organelle that plays a role in bone metastasis and is formed via liquid-liquid phase separation — when liquid blobs of living materials merge into each other. “We believe this is the first time that phase separation has been implicated in cancer metastasis,” said Kang.

Some of Princeton’s leading cancer researchers were startled to discover that what they thought was a straightforward investigation into how cancer spreads through the body — metastasis — turned up evidence of liquid-liquid phase separations: the new field of biology research that investigates how liquid blobs of living materials merge into each other, similar to the movements seen in a lava lamp or in liquid mercury.

“We believe this is the first time that phase separation has been implicated in cancer metastasis,” said Yibin Kang, the Warner-Lambert/Parke-Davis Professor of Molecular Biology. He is the senior author on a new paper featured on the cover of the current issue of Nature Cell Biology.

Not only does their work tie phase separations to cancer research, but the merging blobs turned out to create more than the sum of their parts, self-assembling into a previously unknown organelle (essentially an organ of the cell).

Discovering a new organelle is revolutionary, Kang said. He compared it to finding a new planet within our solar system. “Some organelles we have known for 100 years or more, and then all of a sudden, we found a new one!”

This will shift some fundamental perceptions of what a cell is and does, said Mark Esposito, a 2017 Ph.D. alumnus and current postdoc in Kang’s lab who is the first author on the new paper. “Everybody goes to school, and they learn ‘The mitochondria is the powerhouse of the cell,’ and a few other things about a few organelles, but now, our classic definition of what’s inside a cell, of how a cell organizes itself and controls its behavior, is starting to shift,” he said. “Our research marks a very concrete step forward in that.”

The work grew out of collaborations between researchers in the labs of three Princeton professors: Kang; Ileana Cristea, a professor of molecular biology and leading expert in the mass spectroscopy of living tissue; and Cliff Brangwynne, the June K. Wu ‘92 Professor of Chemical and Biological Engineering and director of the Princeton Bioengineering Initiative, who pioneered the study of phase separation in biological processes.

“Ileana is a biochemist, Cliff is a biophysicist and engineer, and I am a cancer biologist — a cell biologist,” Kang said. “Princeton is just a wonderful place for people to connect and collaborate. We have a very small campus. All the science departments are right next to each other. Ileana’s lab is actually on the same floor of Lewis Thomas as mine! These very close relationships, among very diverse research areas, allow us to bring in technologies from many different angles, and allow breakthroughs to understanding the mechanisms of metabolism in cancer — its progression, metastasis and the immune response — and also come up with new ways to target it.”

The latest breakthrough, featuring the as-yet unnamed organelle, adds new understanding to the role of the Wnt signaling pathway, a system whose discovery led to the 1995 Nobel Prize for Eric Wieschaus, Princeton’s Squibb Professor in Molecular Biology and a professor in the Lewis-Sigler Institute for Integrative Genomics. The Wnt pathway is vital to embryonic development in countless organisms, from tiny invertebrate insects to humans. Wieschaus discovered that cancer can co-opt this pathway, essentially corrupting its ability to grow as rapidly as embryos must, to grow tumors. 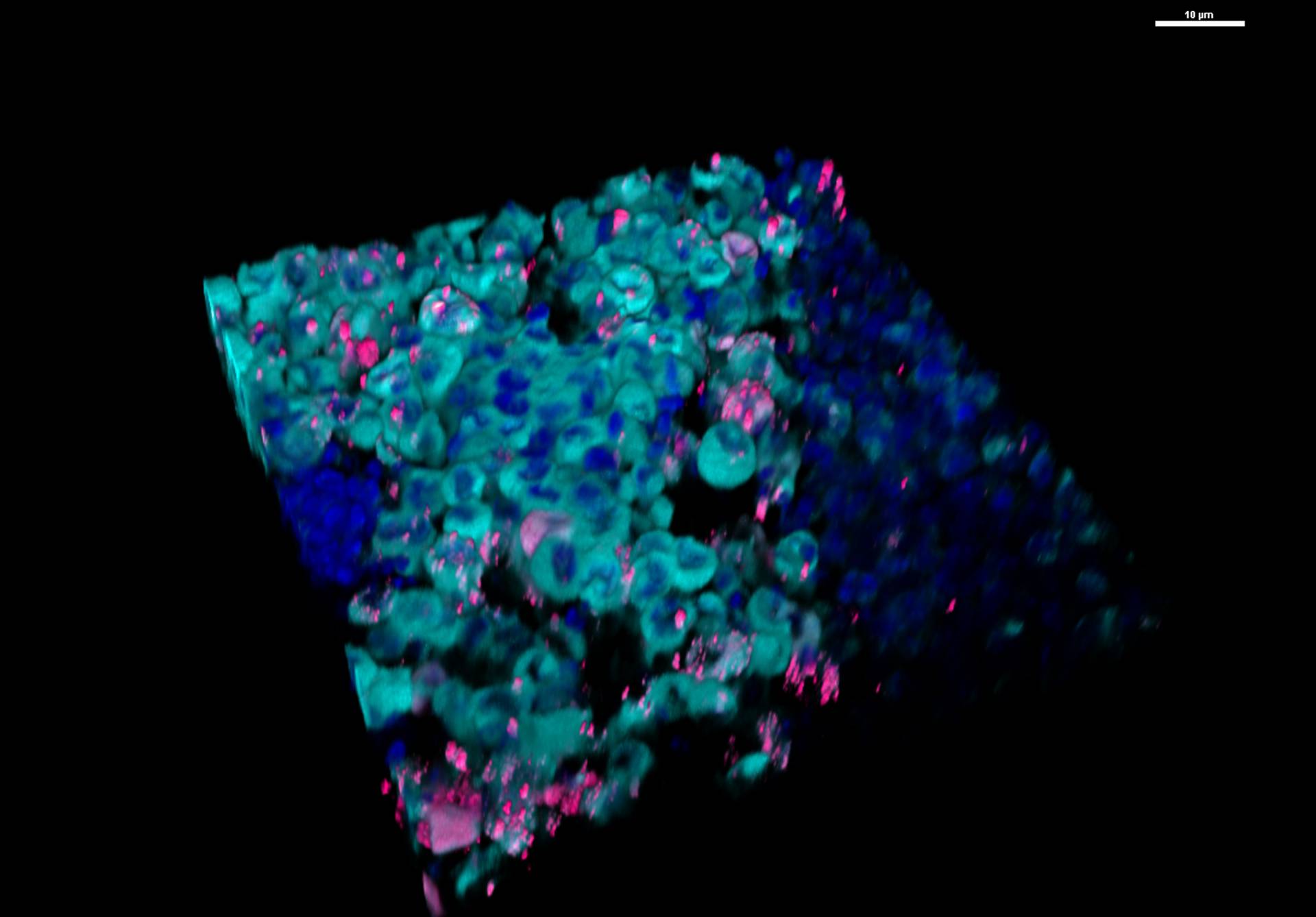 This 3D image of human breast cancer bone metastases shows the formation of the newly described organelle (magenta) in cancer cells (cyan). Cell nuclei from both cancer cells and normal bone cells are labeled in blue.

Subsequent research has revealed that the Wnt signaling pathway plays multiple roles in healthy bone growth as well as in cancer metastasizing to bones. Kang and his colleagues were investigating the complex interplay between Wnt, a signaling molecule called TGF-b, and a relatively unknown gene named DACT1 when they discovered this new organelle.

Through a series of detailed and complex experiments, the researchers pieced together the story: bone tumors initially induce Wnt signaling, to disseminate through the bone. Then, TGF-b, which is abundant in bones, prompts DACT1 to sequester materials in the new organelle in a way that suppresses Wnt signaling. The tumors then stimulate the growth of osteoclasts, which scrub away old bone tissue. (Healthy bones are constantly being replenished in a two-part process: osteoclasts scrub away a layer of bone, then osteoblasts rebuild the bone with new material.) This further increases the TGF-b concentration, prompting even more DACT1 sequestration and subsequent Wnt suppression that has been shown to be important in further metastasis.

By discovering the roles of DACT1 and this organelle, Kang and his team have found new possible targets for cancer drugs. “For example, if we have a way to disrupt the DACT1 complex, perhaps the tumor will disseminate, but it will never be able to ‘grow up’ to be life-threatening metastasis. That’s the hope,” Kang said.

Kang and Esposito recently co-founded KayoThera to pursue the development of medications for patients with late-stage or metastatic cancers, based on their work together in the Kang lab. “The kind of fundamental study that Mark is doing both presents groundbreaking science findings and can also lead to medical breakthroughs,” said Kang.

The researchers have found that DACT1 plays many other roles as well, which their team is only beginning to explore. The mass spectrometry collaboration with Cristea’s team revealed more than 600 different proteins in the mysterious organelle. Mass spectrometry allows scientists to find out the exact components of almost any substance imaged on a microscope slide.

“This is a more dynamic signaling node than just controlling Wnt and TGF-b.” said Esposito. “This is just the tip of the iceberg on a new field of biology.”

This bridge between phase separations and cancer research is still in its infancy, but it already shows great potential, said Brangwynne, who was a co-author on the paper.

“The role that biomolecular condensates play in cancer — both its genesis but particularly its spread through metastasis — is still poorly understood,” he said. “This study provides new insights into the interplay of cancer signaling pathways and condensate biophysics, and it will open up new therapeutic avenues.”