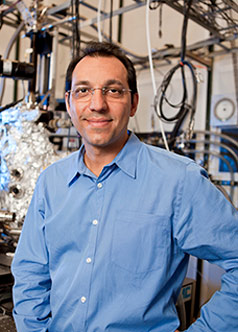 A project that could enable the development of revolutionary electronics and a separate project that could dramatically improve diabetes monitoring and treatment are the first two research efforts to be supported at Princeton University from the Eric and Wendy Schmidt Transformative Technology Fund.

Google CEO and Princeton alumnus Eric Schmidt and his wife, Wendy, created the $25 million endowment fund at Princeton in 2009 to support the advancement of science and engineering through the development and use of entirely new technologies.

The winning research efforts will be led by Ali Yazdani, a professor of physics, and Claire Gmachl, a professor of electrical engineering and director of the University's Mid-Infrared Technologies for Health and the Environment Center (MIRTHE). Yazdani will lead a collaborative team of five faculty members and their research groups to explore the use of exotic insulators in electronic and optical applications. Gmachl will direct a partnership to develop "clip-on" medical sensors to enable non-invasive, continuous glucose monitoring. 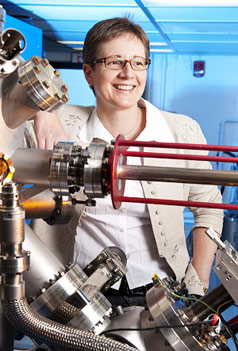 "The research endeavors led by Ali Yazdani and Claire Gmachl have truly transformative potential, exemplifying the vision and the spirit of the Eric and Wendy Schmidt Transformative Technology Fund," Princeton President Shirley M. Tilghman said. "These cutting-edge activities hold promise for high reward. Yazdani's work could enable the development of entirely new classes of electronics, and Gmachl's non-invasive glucose-monitoring devices could dramatically improve the lives of millions of people around the globe. Such tremendous potential for reward does carry with it some risk, and we are grateful to the Schmidts for their foresight in recognizing the need to fund projects of this nature, which have the capacity to yield pathbreaking advances in science and engineering."

The fund was established to allow Princeton's scientists and engineers to explore truly innovative ideas that might include breakthroughs that traditional funding sources would consider too risky to support.

In recent years, this group has spearheaded many of the experimental breakthroughs in the burgeoning field of topological insulators, positioning them at the forefront of the knowledge frontier. Topological insulators are highly unusual materials featuring interiors that do not conduct electricity and metallic surfaces that are highly conductive, owing to the presence of special electrons that behave in extraordinary ways. The juxtaposition of non-conducting interiors and so-called "topological" surface states confers upon these insulators a host of exotic electrical, magnetic and optical properties with vast potential for exploitation in next-generation devices such as optical detection applications, novel superconducting technologies, and "topological" quantum computers -- machines with computing capabilities far superior to today’s devices that would harness the unusual behavior of electrons to process information.

To date, members of this collaborative team have led the charge to demonstrate the existence of "topological" surface states in a variety of compounds and to identify some of their fundamental properties. These include excellent electrical conductivity and an unusually large electrical response to the absorption of light.

Gmachl will collaborate with Assistant Professor of Electrical Engineering Gerard Wysocki to develop fingertip sensors for diabetics that measure blood glucose levels as quickly and painlessly as pulse oximeters measure oxygen saturation in the blood.

The diabetes epidemic has reached epic proportions, affecting nearly 10 percent of Americans and more than 200 million people worldwide. According to the World Health Organization, the global epidemic caused more than one million deaths in 2005, and this figure is projected to double by 2030. The effective management and treatment of the disease hinges on the careful monitoring of levels of blood glucose, or blood sugar, with the frequency of glucose measurement being tightly coupled to the successful management of the condition.

Efforts to develop non-invasive laser sensors for glucose testing have been stymied to date because glucose does not have distinguishing optical features in the visible and near-infrared ranges of the spectrum, the region in which light passes through human tissue easily and for which sensitive photo-detectors have already been developed.

With a $500,000 award from the Schmidt Fund, Gmachl and Wysocki will build on Gmachl's pioneering work on the development of quantum cascade lasers, which emit light in the mid-infrared region of the spectrum, where glucose has characteristic spectral features that distinguish it from other major tissue components, including water, urea and albumin. Additionally, they will draw upon Wysocki's expertise in the development of highly sensitive, compact optical sensor systems.

Their research plans include the development of quantum cascade lasers that emit light at the precise wavelengths needed for glucose testing as well as the creation of photon detectors, electronics and software that can be incorporated into a clip-on sensor for the fingertip or earlobe that can serve as a prototype for commercialization.

Gmachl and Yazdani's projects were selected through a campuswide competition under the auspices of the University's dean for research.

"The response to the Schmidt Fund call for proposals was extraordinary, and we were frankly overwhelmed by the quality and innovativeness of the proposed projects," said Dean for Research A.J. Stewart Smith. "After a detailed internal review, we also consulted external experts to advise us how they would place the promise, potential and risk of these efforts on the world scene. The ideas and plans put forth by these physicists, chemists and engineers have enormous potential for broad and transformative impact. It is wonderful that the generosity and insight of the Schmidts has given the University the capacity to invest in projects of this nature, and it is inspiring to imagine the breakthroughs that may result from these endeavors.

"Based on the experience gained in the inaugural competition, early in the new year we shall be announcing the next call for proposals to the Schmidt Fund," Smith added. "I am completely confident that the depth and breadth of ideas in the Princeton community will lead to future awards as compelling as the ones we announce today."

Schmidt earned a BSE in electrical engineering from Princeton in 1976 and served as a Princeton trustee from 2004 to 2008.