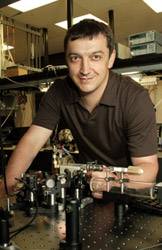 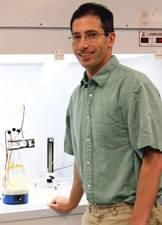 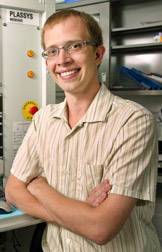 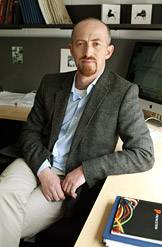 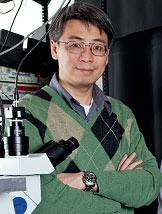 A nitrogen sensor that can monitor environmental change, a "no-frills" quantum computer and a laboratory small enough to fit inside a single cell are the three technologies selected to receive support this year at Princeton University from the Eric and Wendy Schmidt Transformative Technology Fund.

Established in 2009 by Google CEO and Princeton alumnus Eric Schmidt and his wife, Wendy, the $25 million endowment fund supports the development of new technologies that have the potential to enable significant scientific and technological advances.

The researchers spearheading the three winning projects will each receive funds to stimulate the development of these groundbreaking technologies. The environmental change sensor, a novel method for measuring nitrogen, is being created by Gerard Wysocki, an assistant professor of electrical engineering, and Daniel Sigman, the Dusenbury Professor of Geological and Geophysical Sciences. The quantum computer project, with the potential to answer questions currently impossible to address with today's computers, is led by Andrew Houck and Hakan Türeci, both assistant professors of electrical engineering. The "nanolab," small enough to explore the inner workings of cells, is being developed by Haw Yang, associate professor of chemistry.

"Through the generosity of Eric and Wendy Schmidt, we are able to support projects that have the potential to change the way we live through innovative research," said A.J. Stewart Smith, dean for research and the Class of 1909 Professor of Physics. "The Schmidt Fund enables initiatives that show great promise while accepting that cutting-edge research carries some risk. The three projects are inspiring and imaginative, and have tremendous possibilities for making profound advancements in our knowledge of the world around us."

A campuswide competitive process is conducted each year to evaluate Schmidt Fund applicants. The reviewers, who include internal referees and external consultants, look for quality and innovativeness as well as a technology's potential for significant impact on a field. The request for proposals for next year's awards will be issued this September.

This year's winning technologies are:

Nitrogen, a naturally occurring and biologically critical element, can reveal much about how humans impact our environment as well as what can be done to reduce that impact. Yet tracking the flow of nitrogen in the environment has proven difficult because of limitations in existing methods, many of which disturb the systems they are intended to measure. By measuring the two isotopes of nitrogen — forms of the element that vary in mass and behave slightly differently in the environment — researchers can gain new insights into how nitrogen cycles through organisms, soil, fresh water, the ocean and the atmosphere. Wysocki and Sigman have teamed up to develop a highly sensitive, rapid, cost-effective, and broadly applicable method for measuring the nitrogen isotopes. Their nitrogen analyzer would provide insights on how biological processes remove carbon dioxide from the atmosphere and alter our climate.

The new analyzer would measure nitrogen by first converting it to nitric oxide, which would then be analyzed using a sensitive detection method developed by Wysocki and based on Faraday rotation spectroscopy (FRS). With a $700,000 award from the Schmidt Fund, Wysocki and Sigman will develop a new FRS-based instrument that simultaneously detects the two nitrogen isotopes and compares them with calibrated standards, vastly improving the precision and accuracy of the measurements. The sensor could be incorporated into a portable device and taken into the field, dramatically expanding the ability to monitor our environment and understand how human activities alter our soil, water and atmosphere.

Quantum computers have the potential to tackle some of the biggest questions in science, but they are difficult to build because they are so complex. Houck and Türeci have developed a simple tactic: Instead of attempting to build a general-purpose quantum computer, they are working on a stripped-down version that can answer only certain types of questions. This "application-specific" approach is already in use in today's computers, which sport application-specific integrated circuits that carry out specialized computing jobs with superior performance and lower energy costs.

Using this "no-frills" approach, Houck and Türeci could build a system that goes far beyond the current limit of a few qubits (the quantum equivalent of a computer "bit") to make a system of 200 qubits. The two professors intend to capitalize on the unique strengths of the quantum computing approach by tackling only questions that are related to quantum phenomena.

With a $350,000 award from the Schmidt Fund, the researchers plan to construct their computer using building blocks known as circuit quantum electrodynamic elements, in which each qubit is coupled to a device for transmitting signals known as a microwave transmission line resonator. Houck and Türeci would wire together these building blocks to make a computer capable of simulating the quantum behavior of light particles, or photons, and providing key insights into basic energy science.

Tools for exploring the internal workings of the cell tend to involve first ripping open the cell membrane and studying the contents piecemeal. Yang has a different vision: a laboratory so tiny that it can enter the living cell and observe it from within. With a $700,000 award from the Schmidt Fund, Yang aims to build this "nanolab" to revolutionize the way that biological processes are studied and understood.

The nanolab would report on conditions such as pH level, temperature and electric field. Scientists and clinicians would be able to control the nanolab remotely, steering it to investigate different regions within the cell. The nanolab also would provide therapy, by dispensing therapeutic reagents or destroying a diseased area.

The nanolab would carry luminescent particles called "quantum dots" that will change color depending on the conditions, such as temperature, inside the cell. Researchers would monitor the color change and location of the dot using a "nanotracking" device consisting of a modified confocal microscope. This microscope would work together with another tool, a scanning two-photon fluorescent microscope, to monitor the nanolab's intracellular surroundings.