A technology to uncover how the infant brain learns language and a microscope that can image and manipulate the inner workings of a functioning cell have been awarded funding through the Eric and Wendy Schmidt Transformative Technology Fund.

The fund, endowed in 2009 by Eric Schmidt, executive chairman of Google parent company Alphabet Inc., and his wife, Wendy, supports research projects at Princeton University that have the potential to make a major impact in a field of science or technology. Eric Schmidt is a 1976 graduate of Princeton and a former trustee of the University.

"Through the generosity of Eric and Wendy Schmidt, Princeton is able to support truly innovative and promising projects from our faculty members," said Dean for Research Pablo Debenedetti, the Class of 1950 Professor in Engineering and Applied Science and professor of chemical and biological engineering. "These are projects that have tremendous potential but may be too new or untested to obtain funding from traditional sources."

Each year the Schmidt Fund awards the grants through a competitive process. The two winning projects are: 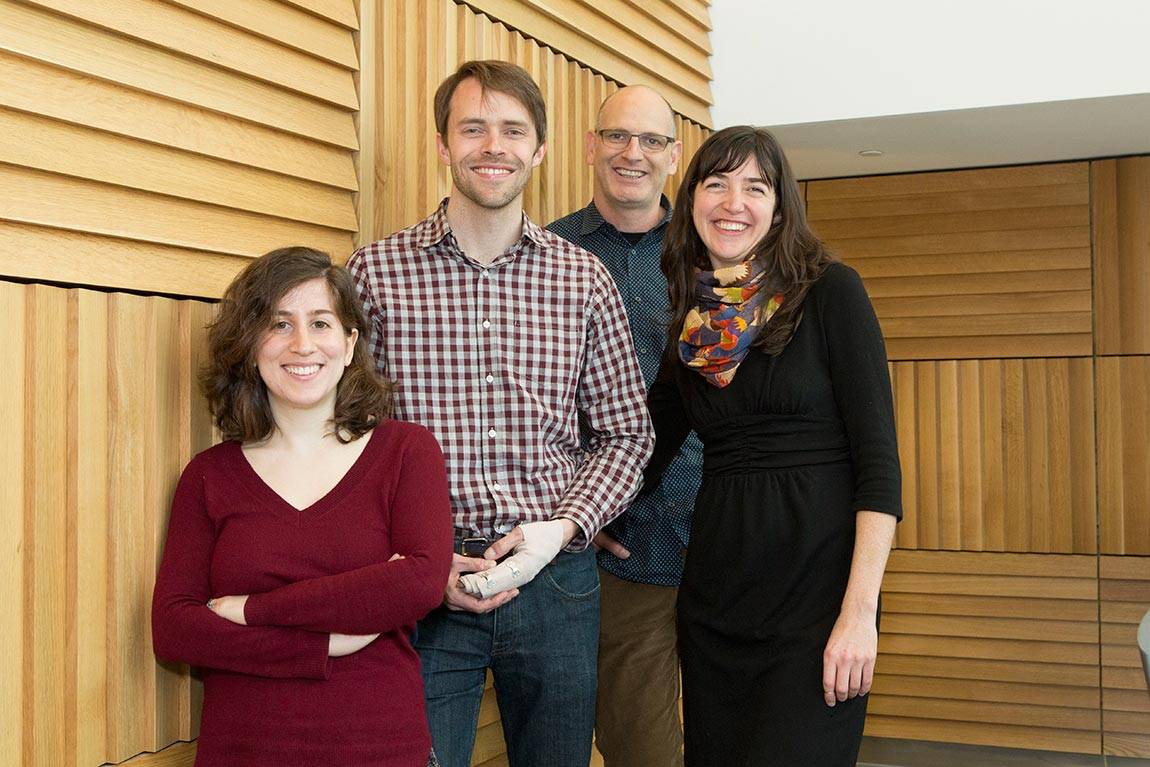 From left: Elise Piazza, Casey Lew-Williams, Uri Hasson and Lauren Emberson received funding to develop a safe and comfortable brain-scanning technology to study infants and their caregivers with the goal of understanding the neural underpinnings of communication and language development. (Photo by Denise Applewhite, Office of Communications)

A technology to study how the infant brain learns language

Interactions with caregivers are an important part of language development in infants and young children, yet traditional MRI-based brain scanners can record only one person at a time and don't permit movement, a problem when studies involve infants. The Schmidt funding will enable researchers to develop a new brain-scanning technology to study the neural underpinnings of human interaction, with a focus on finding out what goes on in the brains of infants and their caregivers during communication in natural settings.

Led by Elise Piazza, an associate research scholar in the Princeton Neuroscience Institute, the project will receive $577,000 to develop a safe and portable imaging system that can measure neural activity in two brains simultaneously. Instead of functional magnetic resonance imaging (fMRI), the system will use functional near-infrared spectroscopy (fNIRS), which measures neural activity using low-intensity light delivered via a cap worn on the head, allowing participants to sit up and move naturally during communication.

"The ability to study communication in a natural setting could revolutionize the study of how infants develop language and shed light on what goes wrong in communication disorders such as autism," Piazza said. "The recording of two brains at the same time is crucial to this understanding, and this project would not be possible without the Schmidt Fund." Piazza's co-investigators are Uri Hasson, associate professor of psychology and the Princeton Neuroscience Institute, and assistant professors of psychology and co-directors of the Princeton Baby Lab Lauren Emberson and Casey Lew-Williams.

Previous work by Hasson has demonstrated that when two people are communicating, their brain activity begins to work in synchrony. The researchers want to find out if a similar type of brain-to-brain coupling happens during infant-to-caregiver interactions. "We'll be able to see how this coupling between infant and caregiver plays a role in the development of communication," Hasson said.

The new scanner could be used to image the brain-to-brain communication that happens when a parent reads to a young child, for example. The portable and comfortable nature of the scanner means that it could be used in doctors' offices and classrooms. 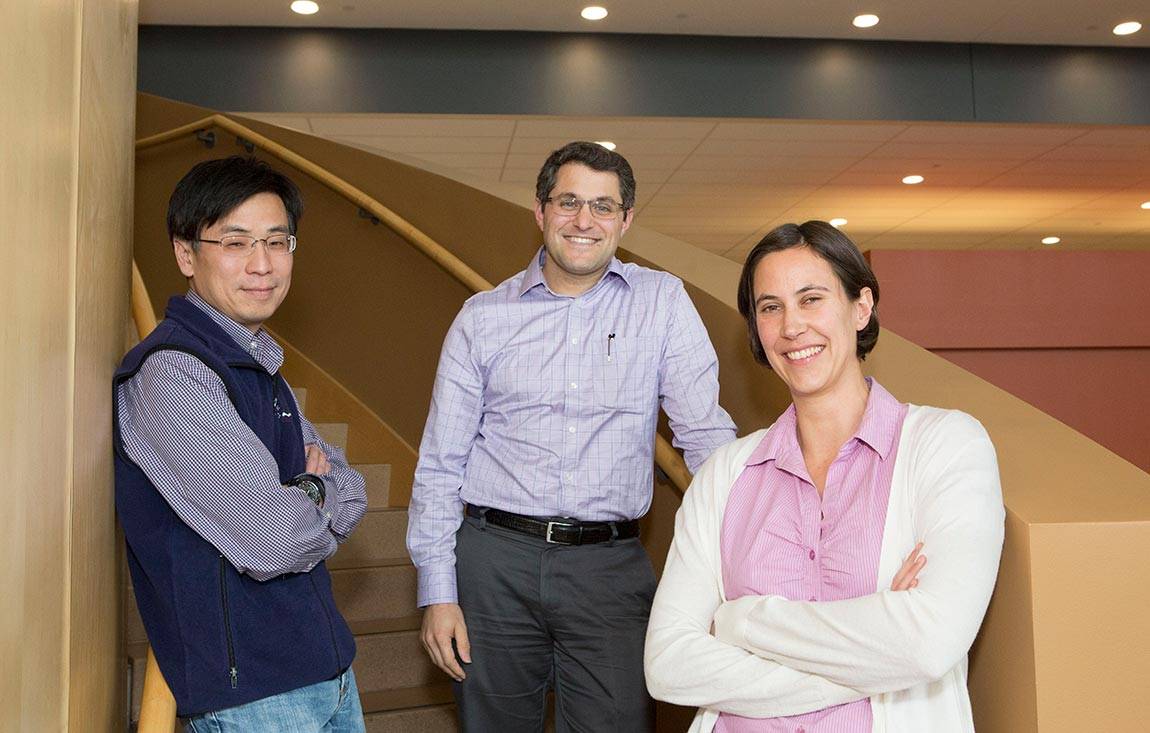 From left: Haw Yang, Joshua Shaevitz and Sabine Petry received funding to develop a new type of microscope for viewing living cells in 3-D to address key mechanistic questions about how cells function and learn more about the cellular missteps that lead to cancer, birth defects and other disorders. (Photo by Denise Applewhite, Office of Communications)

In the second project, researchers are designing and building a new type of microscope that can view a living cell's interior in 3-D while simultaneously allowing investigators to manipulate chromosomes and other internal structures in ways that were previously impossible. The microscope will enable researchers to address key mechanistic questions about how cells function, which could make possible new discoveries about the cellular missteps that lead to cancer, birth defects and other disorders.

The project will receive $723,000 and bring together the expertise of faculty members in biology, chemistry and physics. It is led by Assistant Professor of Molecular Biology Sabine Petry with Professor of Chemistry Haw Yang as well as Joshua Shaevitz, associate professor of physics and the Lewis-Sigler Institute for Integrative Genomics.

Current technologies for 3-D high-resolution imaging typically require that cells be killed and fixed in place. Methods for examining molecular activities inside the cell tend to be conducted using large numbers of molecules. The new microscope would fill a much-needed gap: an instrument that can view the molecules and structures inside the cell in real time. The new technology will also enable investigators to push or pull on these structures using light in form of a laser, or using a new technology, developed by Yang with funding from a 2012 Schmidt Fund award, called photon nudging.

This ability to manipulate structures inside a cell while viewing the results with the microscope is entirely new, said Shaevitz. "This technology would enable researchers to explore the mechanical forces that we know operate inside the cell but that we haven't been able to study directly," he said. These mechanical forces are important in cellular division, a highly orchestrated process that when it goes wrong can lead to cancer and birth defects.

"The ability to bring together our different perspectives is what makes this project so promising," said Petry. "The Schmidt Fund award is critical for supporting interdisciplinary work, which enables us as scientists to be our most creative and leads to new directions in research."