Researchers at Princeton University have begun crystallizing light as part of an effort to answer fundamental questions about the physics of matter.

The researchers are not shining light through crystal — they are transforming light into crystal. As part of an effort to develop exotic materials such as room-temperature superconductors, the researchers have locked together photons, the basic element of light, so that they become fixed in place.

"It's something that we have never seen before," said Andrew Houck, an associate professor of electrical engineering and one of the researchers. "This is a new behavior for light."

The results raise intriguing possibilities for a variety of future materials. The researchers also intend to use the method to address questions about the fundamental study of matter, a field called condensed matter physics.

"We are interested in exploring — and ultimately controlling and directing — the flow of energy at the atomic level," said Hakan Türeci, an assistant professor of electrical engineering and a member of the research team. "The goal is to better understand current materials and processes and to evaluate materials that we cannot yet create." 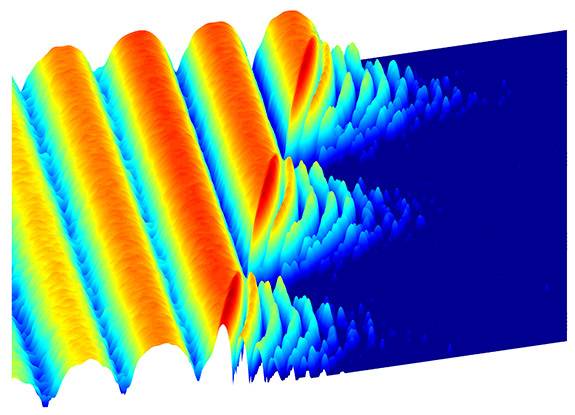 Princeton researchers have created an experimental apparatus that locks photons into place as part of an effort to answer difficult questions about the behavior of subatomic particles. The illustration shows how oscillating photons create an image of frozen light. At first, photons in the experiment flow easily between two superconducting sites, producing the large waves shown at left. After a time, the scientists cause the light to 'freeze,' trapping the photons in place. Fast oscillations on the right of the image are evidence of the new trapped behavior. (Image courtesy of James Raftery et al.)

The team's findings, reported online Sept. 8 in the journal Physical Review X, are part of an effort to answer fundamental questions about atomic behavior by creating a device that can simulate the behavior of subatomic particles. Such a tool could be an invaluable method for answering questions about atoms and molecules that are not answerable even with today's most advanced computers.

In part, that is because current computers operate under the rules of classical mechanics, which is a system that describes the everyday world containing things like bowling balls and planets. But the world of atoms and photons obeys the rules of quantum mechanics, which include a number of strange and very counterintuitive features. One of these odd properties is called "entanglement," in which multiple particles become linked and can affect each other over long distances.

The difference between the quantum and classical rules limits a standard computer's ability to efficiently study quantum systems. Because the computer operates under classical rules, it simply cannot grapple with many of the features of the quantum world. Scientists have long believed that a computer based on the rules of quantum mechanics could allow them to crack problems that are currently unsolvable. Such a computer could answer the questions about materials that the Princeton team is pursuing, but building a general-purpose quantum computer has proven to be incredibly difficult and requires further research.

Another approach, which the Princeton team is taking, is to build a system that directly simulates the desired quantum behavior. Although each machine is limited to a single task, it would allow researchers to answer important questions without having to solve some of the more difficult problems involved in creating a general-purpose quantum computer. In a way, it is like answering questions about airplane design by studying a model airplane in a wind tunnel — solving problems with a physical simulation rather than a digital computer.

The device also could tackle an important class of scientific problems dealing with phenomena as disparate as earthquakes and plastic manufacturing. Unlike most laboratory experiments, which deal with systems isolated from the outside world, these problems deal with systems in which energy enters and leaves the system. These problems, called nonequilibrium problems, are extremely difficult to simulate, but scientists said the Princeton experiment could help.

In a companion piece in Physical Review X, Mohammad Hafezi, an assistant professor of electrical and computer engineering at the University of Maryland, said the Princeton device is "a useful test bed for nonequilibrium physics."

"Quantum nonequilibrium systems are difficult to describe theoretically, but their experimental investigation could shed light on fundamental questions about how quantum systems thermalize and even the formation of the early universe," he noted.

By the rules of quantum mechanics, the photons on the wire inherit some of the properties of the artificial atom — in a sense linking them. Normally photons do not interact with each other, but in this system the researchers are able to create new behavior in which the photons begin to interact in some ways like particles.

"We have used this blending together of the photons and the atom to artificially devise strong interactions among the photons," said Darius Sadri, a postdoctoral researcher and one of the authors. "These interactions then lead to completely new collective behavior for light — akin to the phases of matter, like liquids and crystals, studied in condensed matter physics."

Türeci said that scientists have explored the nature of light for centuries; discovering that sometimes light behaves like a wave and other times like a particle. In the lab at Princeton, the researchers have engineered a new behavior.

"Here we set up a situation where light effectively behaves like a particle in the sense that two photons can interact very strongly," he said. "In one mode of operation, light sloshes back and forth like a liquid; in the other, it freezes."

The current device is relatively small, with only two sites where an artificial atom is paired with a superconducting wire. But the researchers say that by expanding the device and the number of interactions, they can increase their ability to simulate more complex systems — growing from the simulation of a single molecule to that of an entire material. In the future, the team plans to build devices with hundreds of sites with which they hope to observe exotic phases of light such as superfluids and insulators.

"There is a lot of new physics that can be done even with these small systems," said James Raftery, a graduate student in electrical engineering and one of the authors. "But as we scale up, we will be able to tackle some really interesting questions."

Besides Houck, Türeci, Sadri and Raftery, the research team included Sebastian Schmidt, a senior researcher at the Institute for Theoretical Physics at ETH Zurich, Switzerland. Support for the project was provided by the Eric and Wendy Schmidt Transformative Technology Fund, the National Science Foundation, the David and Lucile Packard Foundation, the U.S. Army Research Office, and the Swiss National Science Foundation.