A discovery that long eluded physicists has been detected in a laboratory at Princeton. A team of physicists detected superconducting currents — the flow of electrons without wasting energy — along the exterior edge of a superconducting material. The finding was published May 1 in the journal Science. 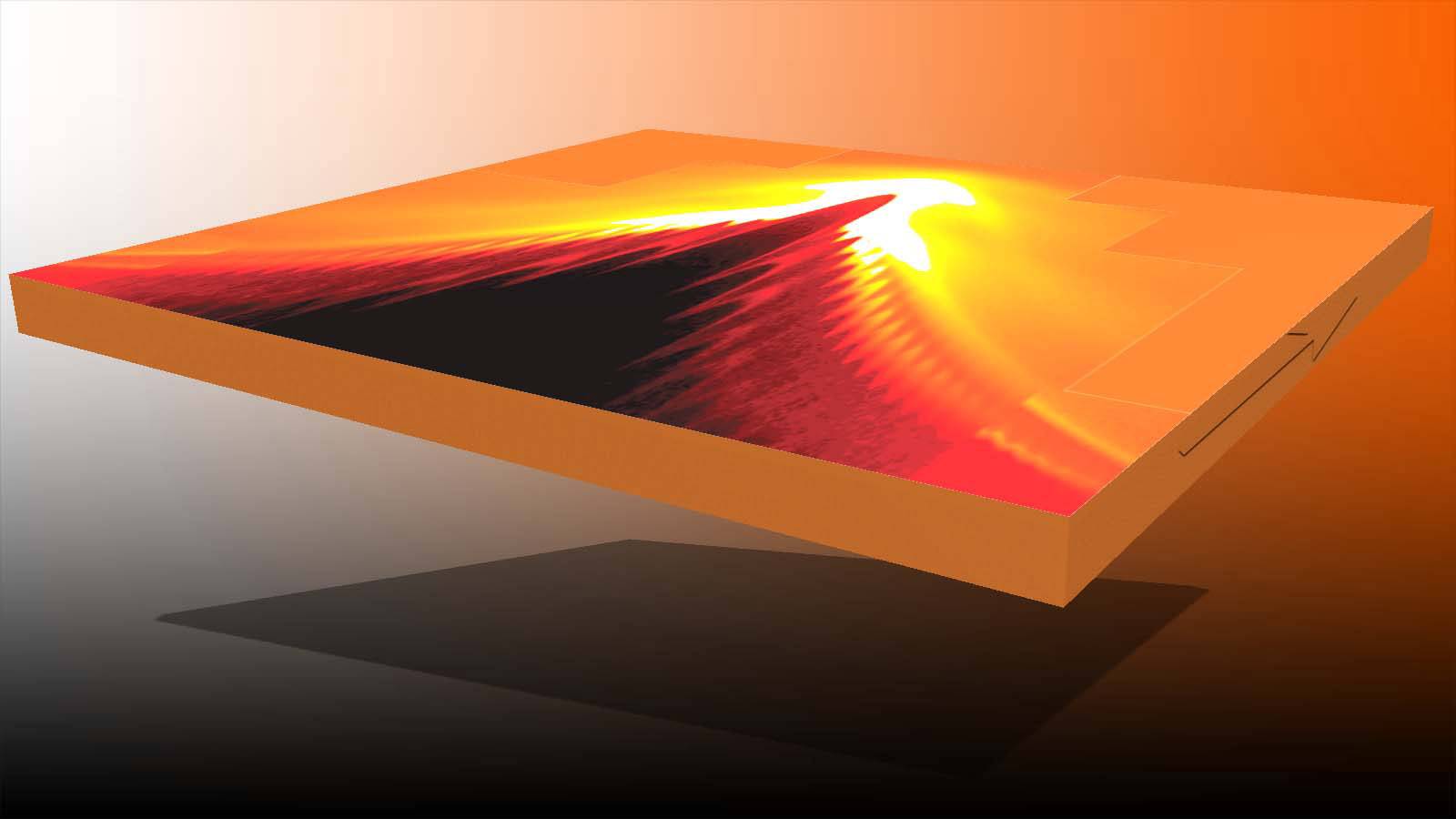 Researchers at Princeton have discovered superconducting currents traveling along the outer edges of a superconductor with topological properties, suggesting a route to topological superconductivity that could be useful in future quantum computers. The superconductivity is represented by the black center of the diagram indicating no resistance to the current flow. The jagged pattern indicates the oscillation of the supercurrent, which varies with the strength of an applied magnetic field.

The superconductor that the researchers studied is also a topological semi-metal, a material that comes with its own unusual electronic properties. The finding suggests ways to unlock a new era of "topological superconductivity" that could have value for quantum computing.

"To our knowledge, this is the first observation of an edge supercurrent in any superconductor," said Nai Phuan Ong, Princeton's Eugene Higgins Professor of Physics and the senior author on the study. Learn more about topological materials in this essay by Ong. 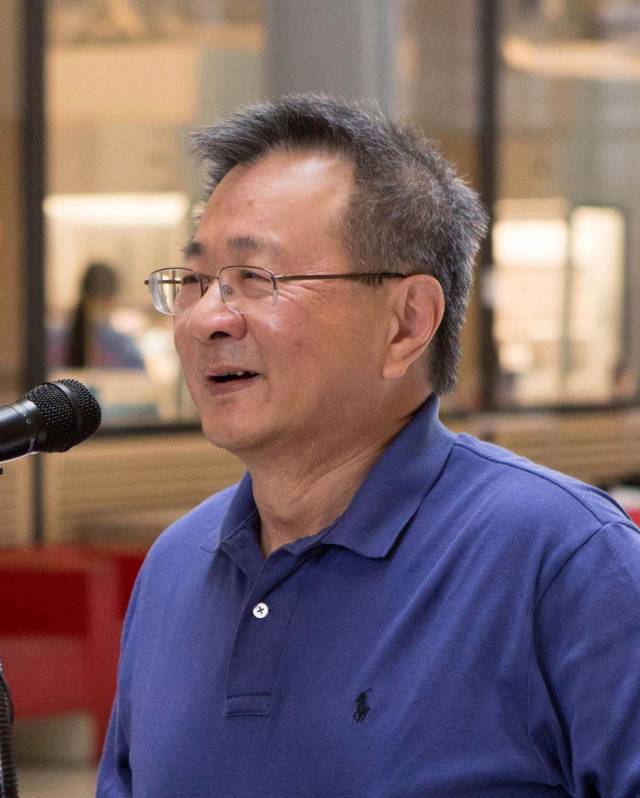 "Our motivating question was, what happens when the interior of the material is not an insulator but a superconductor?" Ong said. "What novel features arise when superconductivity occurs in a topological material?"

Although conventional superconductors already enjoy widespread usage in magnetic resonance imaging (MRI) and long-distance transmission lines, new types of superconductivity could unleash the ability to move beyond the limitations of our familiar technologies.

Researchers at Princeton and elsewhere have been exploring the connections between superconductivity and topological insulators — materials whose non-conformist electronic behaviors were the subject of the 2016 Nobel Prize in Physics for F. Duncan Haldane, Princeton's Sherman Fairchild University Professor of Physics.

To explore superconductivity in topological materials, the researchers turned to a crystalline material called molybdenum ditelluride, which has topological properties and is also a superconductor once the temperature dips below a frigid 100 milliKelvin, which is -459 degrees Fahrenheit.

"Most of the experiments done so far have involved trying to 'inject' superconductivity into topological materials by putting the one material in close proximity to the other," said Stephan Kim, a graduate student in electrical engineering, who conducted many of the experiments. "What is different about our measurement is we did not inject superconductivity and yet we were able to show the signatures of edge states." 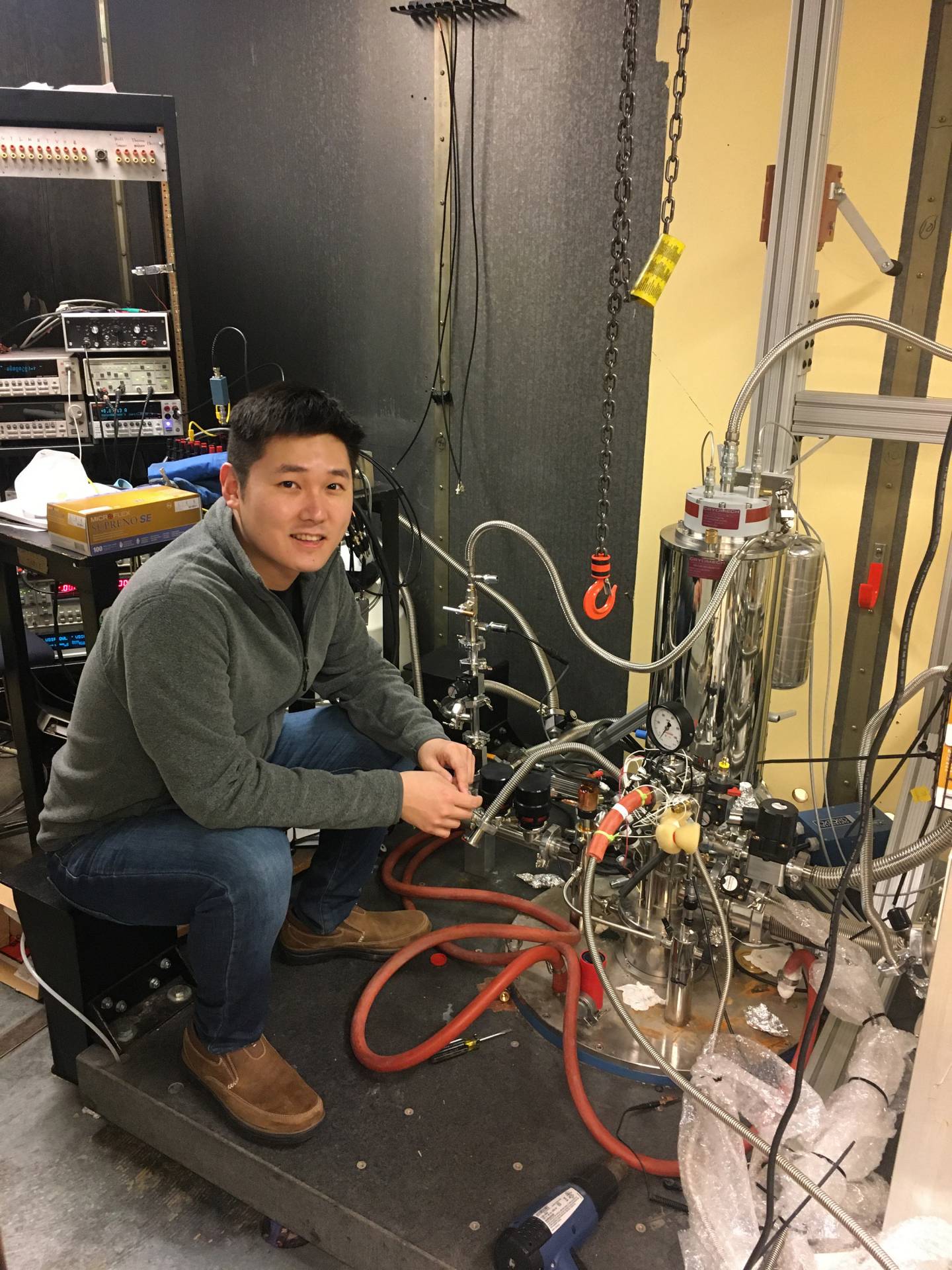 Stephan Kim, a graduate student in the Department of Electrical Engineering, conducted experiments demonstrating supercurrents in a topological material.

The team first grew crystals in the laboratory and then cooled them down to a temperature where superconductivity occurs. They then applied a weak magnetic field while measuring the current flow through the crystal. They observed that a quantity called the critical current displays oscillations, which appear as a saw-tooth pattern, as the magnetic field is increased.

"When we finished the data analysis for the first sample, I looked at my computer screen and could not believe my eyes, the oscillations we observed were just so beautiful and yet so mysterious," said Wudi Wang, who as first author led the study and earned his Ph.D. in physics from Princeton in 2019. "It's like a puzzle that started to reveal itself and is waiting to be solved. Later, as we collected more data from different samples, I was surprised at how perfectly the data fit together."

Researchers have long known that superconductivity arises when electrons, which normally move about randomly, bind into twos to form Cooper pairs, which in a sense dance to the same beat. "A rough analogy is a billion couples executing the same tightly scripted dance choreography," Ong said.

The script the electrons are following is called the superconductor's wave function, which may be regarded roughly as a ribbon stretched along the length of the superconducting wire, Ong said. A slight twist of the wave function compels all Cooper pairs in a long wire to move with the same velocity as a "superfluid" — in other words acting like a single collection rather than like individual particles — that flows without producing heating.

If there are no twists along the ribbon, Ong said, the Cooper pairs are stationary and no current flows. If the researchers expose the superconductor to a weak magnetic field, this adds an additional contribution to the twisting that the researchers call the magnetic flux, which, for very small particles such as electrons, follows the rules of quantum mechanics. 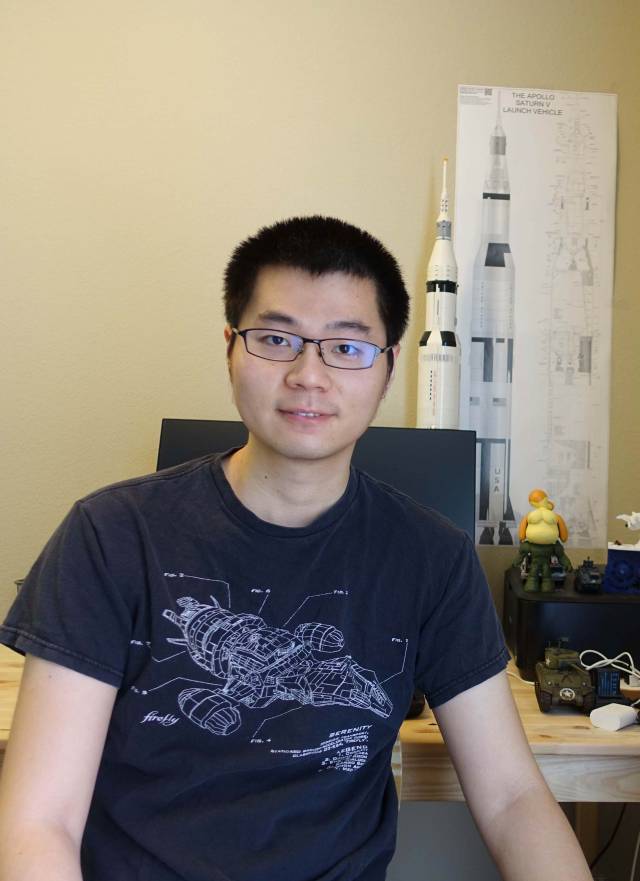 Wudi Wang, the first author on the study, led the study and conducted many of the experiments. He earned his Ph.D. in physics from Princeton in 2019.

The team measured the superfluid current as they varied the magnetic flux and found that indeed the saw-tooth pattern was visible.

In molybdenum ditelluride and other so-called Weyl semimetals, this Cooper-pairing of electrons in the bulk appears to induce a similar pairing on the edges.

The researchers noted that the reason why the edge supercurrent remains independent of the bulk supercurrent is currently not well understood. Ong compared the electrons moving collectively, also called condensates, to puddles of liquid.

"From classical expectations, one would expect two fluid puddles that are in direct contact to merge into one," Ong said. "Yet the experiment shows that the edge condensates remain distinct from that in the bulk of the crystal."

The research team speculates that the mechanism that keeps the two condensates from mixing is the topological protection inherited from the protected edge states in molybdenum ditelluride. The group hopes to apply the same experimental technique to search for edge supercurrents in other unconventional superconductors.

"There are probably scores of them out there," Ong said.

Funding: The research was supported by the U.S. Army Research Office (W911NF-16-1-0116). The dilution refrigerator experiments were supported by the U.S. Department of Energy (DE- SC0017863). N.P.O. and R.J.C. acknowledge support from the Gordon and Betty Moore Foundation’s Emergent Phenomena in Quantum Systems Initiative through grants GBMF4539 (N.P.O.) and GBMF-4412 (R.J.C.). The growth and characterization of crystals were performed by F.A.C. and R.J.C., with support from the National Science Foundation (NSF MRSEC grant DMR 1420541).

The study, "Evidence for an edge supercurrent in the Weyl superconductor MoTe2," by Wudi Wang, Stephan Kim, Minhao Liu, F. A. Cevallos, Robert. J. Cava and Nai Phuan Ong, was published in the journal Science on May 1, 2020. 10.1126/science.aaw9270