Electrons inhabit a strange and topsy-turvy world. These infinitesimally small particles have never ceased to amaze and mystify despite the more than a century that scientists have studied them. Now, in an even more amazing twist, physicists have discovered that, under certain conditions, interacting electrons can create what are called “topological quantum states.” This finding, which was recently published in the journal Nature, holds great potential for revolutionizing electrical engineering, materials science and especially computer science.

Topological states of matter are particularly intriguing classes of quantum phenomena. Their study combines quantum physics with topology, which is the branch of theoretical mathematics that studies geometric properties that can be deformed but not intrinsically changed. Topological quantum states first came to the public’s attention in 2016 when three scientists — Princeton’s Duncan Haldane, who is Princeton’s Thomas D. Jones Professor of Mathematical Physics and Sherman Fairchild University Professor of Physics, together with David Thouless and Michael Kosterlitz — were awarded the Nobel Prize for their work in uncovering the role of topology in electronic materials. 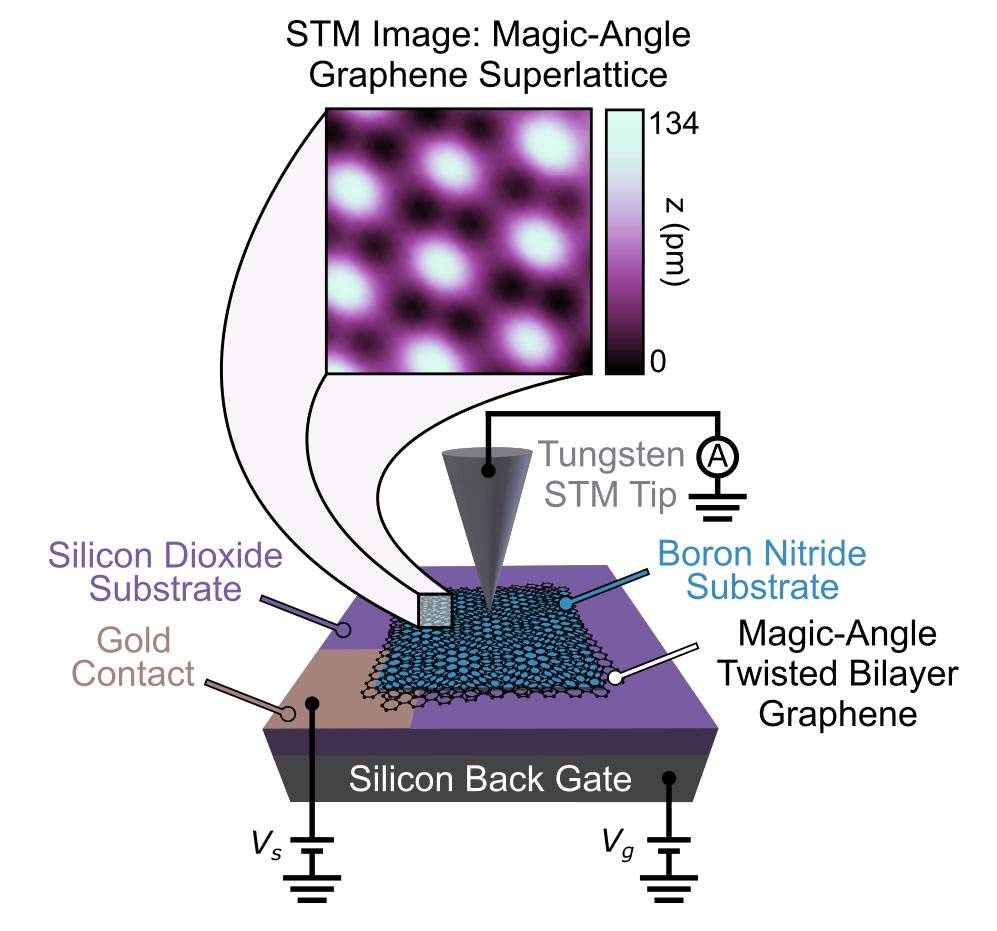 A Princeton-led team of physicists have discovered that, under certain conditions, interacting electrons can create what are called “topological quantum states,” which, has implications for many technological fields of study, especially information technology. To get the desired quantum effect, the researchers placed two sheets of graphene on top of each other with the top layer twisted at the "magic" angle of 1.1 degrees, which creates a moiré pattern. This diagram shows a scanning tunneling microscope imaging the magic-angle twisted bilayer graphene.

“The last decade has seen quite a lot of excitement about new topological quantum states of electrons,” said Ali Yazdani, the Class of 1909 Professor of Physics at Princeton and the senior author of the study. “Most of what we have uncovered in the last decade has been focused on how electrons get these topological properties, without thinking about them interacting with one another.”

But by using a material known as magic-angle twisted bilayer graphene, Yazdani and his team were able to explore how interacting electrons can give rise to surprising phases of matter.

The remarkable properties of graphene were discovered two years ago when Pablo Jarillo-Herrero and his team at the Massachusetts Institute of Technology (MIT) used it to induce superconductivity — a state in which electrons flow freely without any resistance. The discovery was immediately recognized as a new material platform for exploring unusual quantum phenomena.

Yazdani and his fellow researchers were intrigued by this discovery and set out to further explore the intricacies of superconductivity.

But what they discovered led them down a different and untrodden path.

“This was a wonderful detour that came out of nowhere,” said Kevin Nuckolls, the lead author of the paper and a graduate student in physics. “It was totally unexpected, and something we noticed that was going to be important.”

Following the example of Jarillo-Herrero and his team, Yazdani, Nuckolls and the other researchers focused their investigation on twisted bilayer graphene.

“It’s really a miracle material,” Nuckolls said. “It’s a two-dimensional lattice of carbon atoms that’s a great electrical conductor and is one of the strongest crystals known.”

Graphene is produced in a deceptively simple but painstaking manner: a bulk crystal of graphite, the same pure graphite in pencils, is exfoliated using sticky tape to remove the top layers until finally reaching a single-atom-thin layer of carbon, with atoms arranged in a flat honeycomb lattice pattern.

To get the desired quantum effect, the Princeton researchers, following the work of Jarillo-Herrero, placed two sheets of graphene on top of each other with the top layer angled slightly. This twisting creates a moiré pattern, which resembles and is named after a common French textile design. The important point, however, is the angle at which the top layer of graphene is positioned: precisely 1.1 degrees, the “magic” angle that produces the quantum effect.

“It’s such a weird glitch in nature,” Nuckolls said, “that it is exactly this one angle that needs to be achieved.” Angling the top layer of graphene at 1.2 degrees, for example, produces no effect.

The researchers generated extremely low temperatures and created a slight magnetic field. They then used a machine called a scanning tunneling microscope, which relies on a technique called “quantum tunneling” rather than light to view the atomic and subatomic world. They directed the microscope’s conductive metal tip on the surface of the magic-angle twisted graphene and were able to detect the energy levels of the electrons.

They found that the magic-angle graphene changed how electrons moved on the graphene sheet. “It creates a condition which forces the electrons to be at the same energy,” said Yazdani. “We call this a ‘flat band.’”

When electrons have the same energy — are in a flat band material — they interact with each other very strongly. “This interplay can make electrons do many exotic things,” Yazdani said.

One of these “exotic” things, the researchers discovered, was the creation of unexpected and spontaneous topological states.

“This twisting of the graphene creates the right conditions to create a very strong interaction between electrons,” Yazdani explained. “And this interaction unexpectedly favors electrons to organize themselves into a series of topological quantum states.” 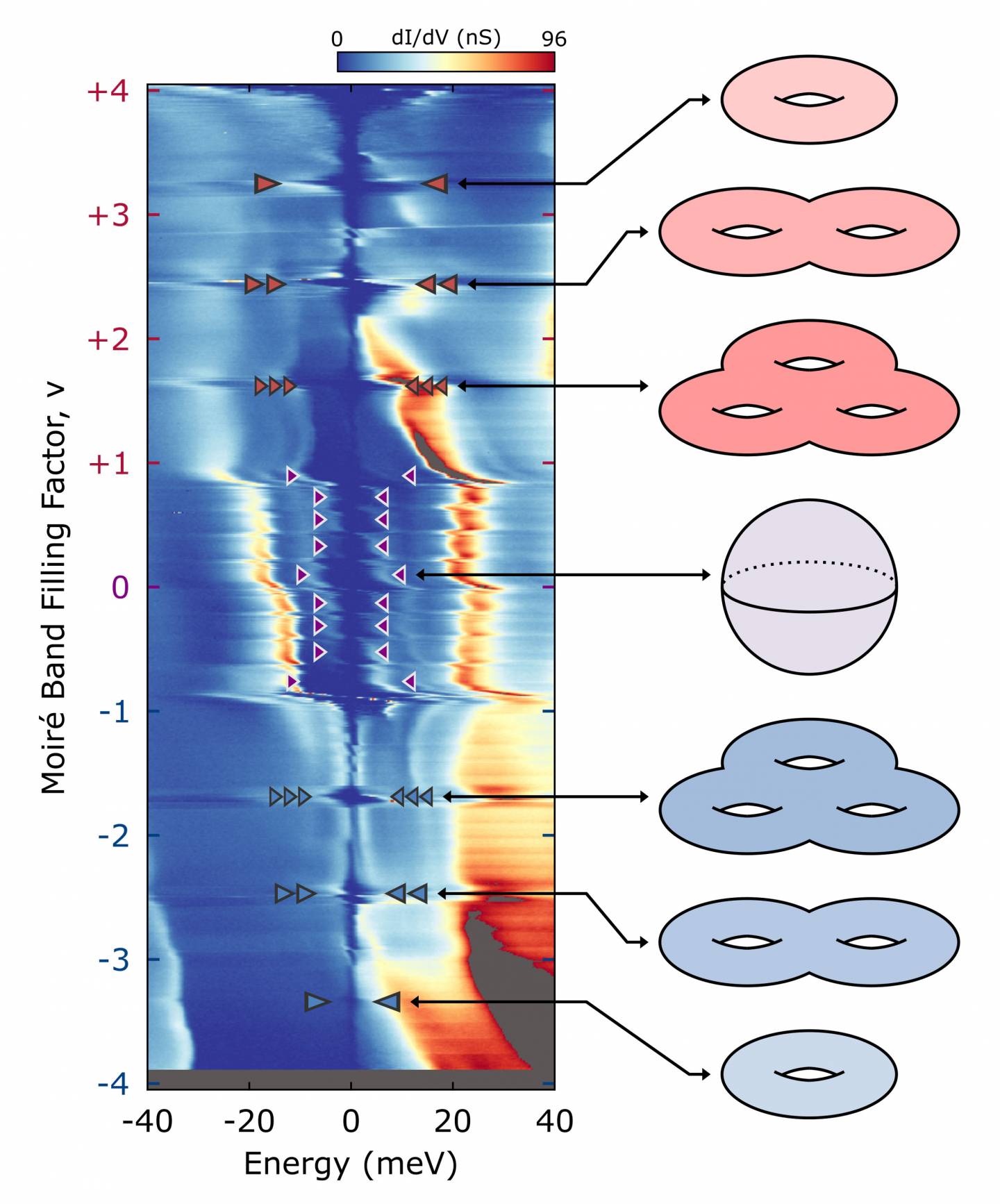 The researchers discovered that the interaction between electrons creates topological insulators: unique devices that whose interiors do not conduct electricity but whose edges allow the continuous and unimpeded movement of electrons. This diagram depicts the different insulating states of the magic-angle graphene, each characterized by an integer called its “Chern number,” which distinguishes between different topological phases.

Specifically, they discovered that the interaction between electrons creates what are called topological insulators. These are unique devices that act as insulators in their interiors, which means that the electrons inside are not free to move around and therefore do not conduct electricity. However, the electrons on the edges are free to move around, meaning they are conductive. Moreover, because of the special properties of topology, the electrons flowing along the edges are not hampered by any defects or deformations. They flow continuously and effectively circumvent the constraints — such as minute imperfections in a material’s surface — that typically impede the movement of electrons.

During the course of the work, Yazdani’s experimental group teamed up two other Princetonians — Andrei Bernevig, professor of physics, and Biao Lian, assistant professor of physics — to understand the underlying physical mechanism for their findings.

“Our theory shows that two important ingredients — interactions and topology — which in nature mostly appear decoupled from each other, combine in this system,” Bernevig said. This coupling creates the topological insulator states that were observed experimentally.

Although the field of quantum topology is relatively new, it could transform computer science. “People talk a lot about its relevance to quantum computing, where you can use these topological quantum states to make better types of quantum bits,” Yazdani said. “The motivation for what we’re trying to do is to understand how quantum information can be encoded inside a topological phase. Research in this area is producing exciting new science and can have potential impact in advancing quantum information technologies.”

Yazdani and his team will continue their research into understanding how the interactions of electrons give rise to different topological states.

“The interplay between the topology and superconductivity in this material system is quite fascinating and is something we will try to understand next,” Yazdani said.

In addition to Yazdani, Nuckolls, Bernevig and Lian, contributors to the study included co-first authors Myungchul Oh and Dillon Wong, postdoctoral research associates, as well as Kenji Watanabe and Takashi Taniguchi of the National Institute for Material Science in Japan.

“Strongly Correlated Chern Insulators in Magic-Angle Twisted Bilayer Graphene,” by Kevin P. Nuckolls, Myungchul Oh, Dillon Wong, Biao Lian, Kenji Watanabe, Takashi Taniguchi, B. Andrei Bernevig and Ali Yazdani, was published Dec. 14 in the journal Nature (DOI: 10.1038/s41586-020-3028-8). This work was primarily supported by the Gordon and Betty Moore Foundation’s EPiQS initiative (GBMF4530, GBMF9469) and the Department of Energy (DE-FG02-07ER46419 and DE-SC0016239). Other support for the experimental work was provided by the National Science Foundation (Materials Research Science and Engineering Centers through the Princeton Center for Complex Materials (NSF-DMR-1420541, NSF-DMR-1904442) and EAGER DMR-1643312), ExxonMobil through the Andlinger Center for Energy and the Environment at Princeton, the Princeton Catalysis Initiative, the Elemental Strategy Initiative conducted by Japan’s Ministry of Education, Culture, Sports, Science and Technology (JPMXP0112101001, JSPS KAKENHI grant JP20H0035, and CREST JPMJCR15F3),  the Princeton Center for Theoretical Science at Princeton University, the Simons Foundation, the Packard Foundation, the Schmidt Fund for Innovative Research, BSF Israel US foundation (2018226), the Office of Naval Research (N00014-20-1-2303) and the Princeton Global Network Funds.