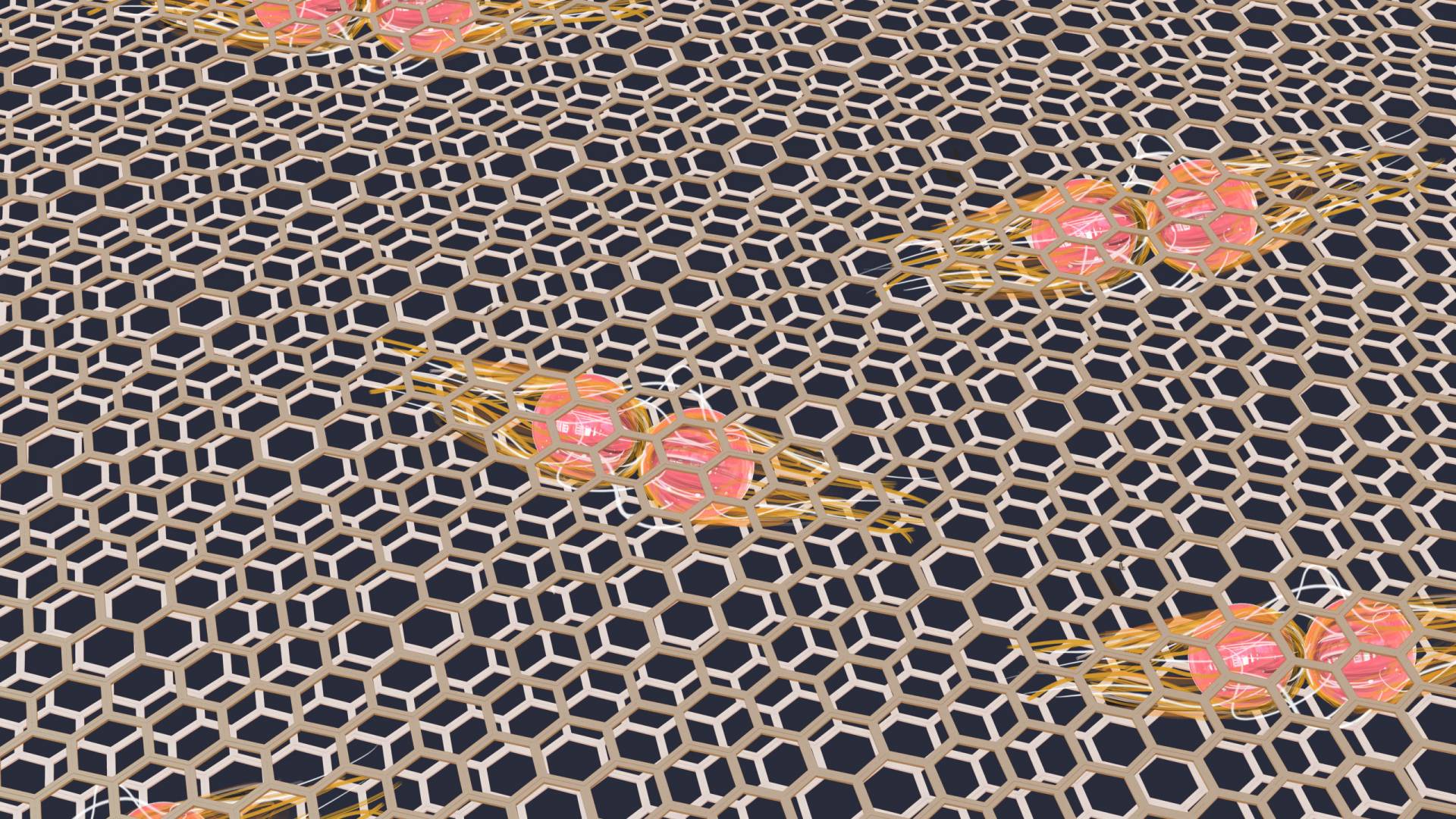 A team led by Princeton physicist Ali Yazdani has shown that strong electron interactions play a key role in the superconductivity that has been discovered in graphene, a material made up of single-layer sheets of carbon atoms. Here, two graphene sheets stacked on each other with a twist make a long-wavelength moiré pattern.

In spring 2018, the surprising discovery of superconductivity in a new material set the scientific community abuzz. Built by layering one carbon sheet atop another and twisting the top one at a "magic" angle, the material enabled electrons to flow without resistance, a trait that could dramatically boost energy efficient power transmission and usher in a host of new technologies.

Now, new experiments conducted at Princeton give hints at how this material — known as magic-angle twisted graphene — gives rise to superconductivity. In this week's issue of the journal Nature, Princeton researchers provide firm evidence that the superconducting behavior arises from strong interactions between electrons, yielding insights into the rules that electrons follow when superconductivity emerges.

"This is one of the hottest topics in physics," said Ali Yazdani, who is the Class of 1909 Professor of Physics and the senior author of the study. "This is a material that is incredibly simple, just two sheets of carbon that you stick one on top of the other, and it shows superconductivity."

Exactly how superconductivity arises is a mystery that laboratories around the world are racing to solve. The field even has a name, "twistronics."

Part of the excitement is that, compared to existing superconductors, the material is quite easy to study since it only has two layers and only one type of atom — carbon.

"The main thing about this new material is that it is a playground for all these kinds of physics that people have been thinking about for the last 40 years," said B. Andrei Bernevig, a professor of physics specializing in theories to explain complex materials.

The superconductivity in the new material appears to work by a fundamentally different mechanism from traditional superconductors, which today are used in powerful magnets and other limited applications. This new material has similarities to copper-based, high-temperature superconductors discovered in the 1980s called cuprates. The discovery of cuprates led to the Nobel Prize in Physics in 1987.

The new material consists of two atomically thin sheets of carbon known as graphene. Also the subject of a Nobel Prize in Physics, in 2010, graphene has a flat honeycomb pattern, like a sheet of chicken wire. In March 2018, Pablo Jarillo-Herrero and his team at the Massachusetts Institute of Technology placed a second layer of graphene atop the first, then rotated the top sheet by the "magic" angle of about 1.1 degrees. This angle had been predicted earlier by physicists to cause new electron interactions, but it came as a shock when MIT scientists demonstrated superconductivity.

Seen from above, the overlapping chicken-wire patterns give a flickering effect known as "moiré," which arises when two geometrically regular patterns overlap, and which was once popular in the fabrics and fashions of 17th- and 18th-century royals.

These moiré patterns give rise to profoundly new properties not seen in ordinary materials. Most ordinary materials fall into a spectrum from insulating to conducting. Insulators trap electrons in energy pockets or levels that keep them stuck in place, while metals contain energy states that permit electrons to flit from atom to atom. In both cases, electrons occupy different energy levels and do not interact or engage in collective behavior.

In twisted graphene, however, the physical structure of the moiré lattice creates energy states that prevent electrons from standing apart, forcing them to interact. "It is creating a condition where the electrons can't get out of each other's way, and instead they all have to be in similar energy levels, which is prime condition to create highly entangled states," Yazdani said.

To address this question, Princeton researchers used a scanning tunneling microscope that is so sensitive that it can image individual atoms on a surface. The team scanned samples of magic-angle twisted graphene in which they controlled the number of electrons by applying a voltage to a nearby electrode. The study provided microscopic information on electron behavior in twisted bilayer graphene, whereas most other studies to date have monitored only macroscopic electrical conduction.

By dialing the number of electrons to very low or very high concentrations, the researchers observed electrons behaving almost independently, as they would in simple metals. However, at the critical concentration of electrons where superconductivity was discovered in this system, the electrons suddenly displayed signs of strong interaction and entanglement.

At the concentration where superconductivity emerged, the team found that the electron energy levels became unexpectedly broad, signals that confirm strong interaction and entanglement. Still, Bernevig emphasized that while these experiments open the door to further study, more work needs to be done to understand in detail the type of entanglement that is occurring.

"There is still so much we don't know about these systems," he said. "We are nowhere near even scraping the surface of what can be learned through experiments and theoretical modeling."