A Princeton-led research team has revealed surprising information about how electron behavior influences the conduction of electricity in a class of high-temperature superconductors. An increased understanding of this mechanism could one day transform a number of technologies, including the transmission of electrical power.

The pairing of electrons, which normally repel one another, is a known prerequisite for superconductivity -- the ability of certain materials to conduct electricity with no resistance.

In 1986, scientists discovered high-temperature ceramic superconductors, often called cuprates for the copper-oxide layers they contain. These ceramics exhibit superconductivity at practically applicable temperatures, around 165 Kelvin (-162 F, -108 C), which can be reached with liquid nitrogen. Since then, scientists have struggled to understand this phenomenon, often invoking explanations used for more than 50 years to explain the behavior of elements, such as lead, that behave as superconductors at temperatures near absolute zero. A common conception is that stronger electron pairing enables superconductivity to occur at higher temperatures.

But results published by the team in the June 26 issue of the journal Science demonstrate that the strength of electron pairing alone does not control the temperature at which these materials behave as superconductors. In cuprates, the range of angles over which the electrons are able to exhibit superconducting pairing also is critical. The optimal superconductivity occurs when electrons are able to pair effectively over the widest range of angles. 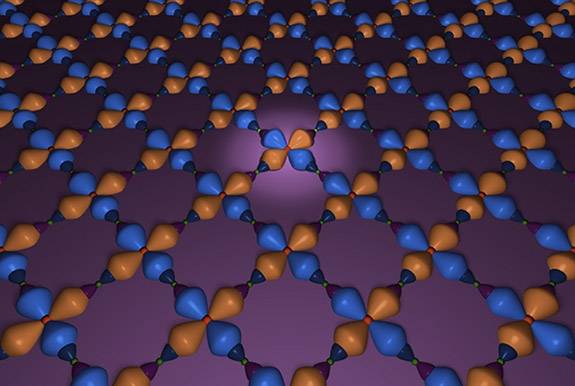 This image shows a bonding structure of copper and oxygen atoms on a plane within the cuprate. (Image: Courtesy of Yazdani Laboratory)

To picture this, imagine electrons hopping around on a square lattice of atoms that are chemically bonded together. At each instant, an electron on each atomic site can pair up with another electron at a nearby site. These pairs can form at a variety of different angles relative to the chemical bonds that hold the atomic lattice together.

"These materials and their exotic superconductivity force us to constantly re-examine long held views on the connection between electron pairing and superconductivity," said Ali Yazdani, a Princeton professor of physics and member of the research team.

The scientists worked with cuprates containing layers of copper-oxide organized in a lattice structure with atoms of other elements, including bismuth, strontium and calcium. Oddly, these materials usually behave as insulators, meaning they do not transmit electricity at all, but they can be made to behave as conductors by changing the number of electrons they contain. Chemical substitution of certain elements for others, a process called "doping", is commonly used to alter the number of electrons in the material and to achieve a variety of different "transition temperatures" to superconductivity, at which point the materials are able to conduct electricity with no resistance. With increased doping, the transition temperature in cuprates is known to go up until a certain "optimal doping level" is reached. Additional doping after this point causes the transition temperature to decrease.   Scientists are eager to find superconductors with the highest transition temperatures in hopes of one day discovering materials that transmit electricity with no resistance at room temperature.

"This was a big surprise," Yazdani said. "It forced us to reconsider what is controlling the transition temperature beyond the usual strength of pairing."

Looking for an explanation, the scientists developed a new technique that allowed them to investigate the angles over which the electrons showed superconducting pairing in the different samples.

In the future, the team intends to investigate the details of this pairing mechanism more fully in an attempt to determine what makes electron pairs ineffective for superconductivity at certain angles in some samples. Their ultimate goal is to apply this new understanding to the design of superconductors with even higher transition temperatures than are currently known.

These results build on the team's experiments over the past several years, which have searched for the fundamental force "gluing" electrons into pairs and demonstrated that electron pairing can even be present at temperatures higher than when samples exhibit zero resistance. Their research is made possible by powerful scanning tunneling microscopes built by the team, which allow detailed measurements of material properties with extraordinary precision.