The coexistence of two opposing phenomena might be the secret to understanding the enduring mystery in physics of how materials heralded as the future of powering our homes and communities actually work, according to Princeton University-led research. Such insight could help spur the further development of high-efficiency electric-power delivery.

Published in the journal Science, the findings provide a substantial clue for unraveling the inner workings of high-temperature superconductors (HTS) based on compounds containing copper and oxygen, or copper oxides. Copper-oxide high-temperature superconductors are prized as a material for making power lines because of their ability to conduct electricity with no resistance. It's been shown that the material can be used to deliver electrical power like ordinary transmission lines, but with no loss of energy. In addition, typical superconductors need extremely low temperatures of roughly -243 degrees Celsius (-405 degrees Fahrenheit) to exhibit this 100-percent efficiency. A copper oxide HTS, however, can reach this level of efficiency at a comparatively toasty -135 degrees Celsius (-211 degrees Fahrenheit), which is achievable using liquid nitrogen.

Copper oxides are the linchpin of the world's first superconducting electrical line, the 600-meter (1,970-foot) cable installed on Long Island in 2008 as the Holbrook Superconductor Project funded by the U.S. Department of Energy. The cable is chilled with about 49,000 liters (13,000 gallons) of liquid nitrogen. Another 3 million meters (1,860 miles) of superconducting cables are bound for a power grid in South Korea. 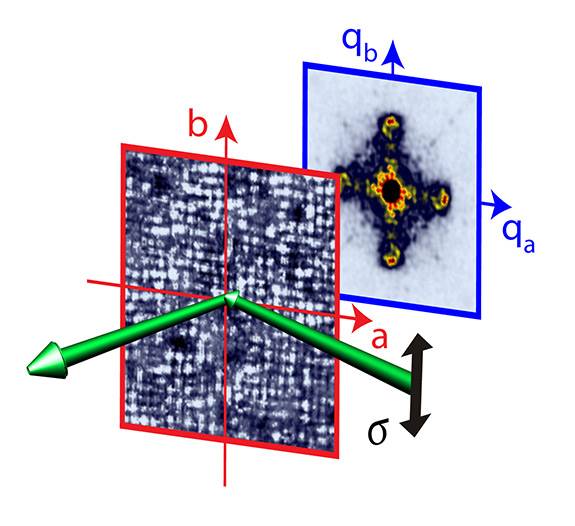 Princeton University-led researchers report that the coexistence of two opposing phenomena might explain how materials known as high-temperature superconductors, which are heralded as the future of powering our homes and communities, actually work. The researchers found that electrons in copper oxide high-temperature superconductors — a copper-oxygen compound prized for making power lines because of its ability to conduct electricity with no resistance — can organize into a fixed pattern known as a charge-order state, or, at a low enough temperature, move freely as superconducting pairs to carry electricity without resistance. The researchers uniquely combined atomic-scale microscopy (front image) and a new sensitive X-ray scattering technique (rear image) to visualize the structure of the charge-order state in copper oxide and its relationship with superconductivity. The image shows that the two techniques reveal unique yet complementary images of the same charge-order state, thereby demonstrating its existence in copper oxide. The junction where the charge-order and superconducting states coexist could help scientists further develop and control superconductivity. (Image courtesy of Ali Yazdani, Department of Physics)

Despite the promise and burgeoning commercial embrace of HTS materials, scientists still do not fully understand many of the properties of these compounds, including how superconductivity occurs at such high temperatures, said Ali Yazdani, a Princeton physics professor and the Science paper's senior author. That knowledge gap has hindered the development of additional HTC materials as well as efforts to increase further the temperature at which superconductivity can occur, Yazdani said.

The secret to high-temperature superconductivity may lie at the junction of that state and its near opposite, Yazdani and his colleagues found. The researchers report that high-temperature superconductivity in copper oxides forms as the material is cooled from a state in which electrons exhibit what is normally considered a competing behavior called "charge ordering." In a superconductor, electrons overcome their repulsion and form pairs that move in unison and conduct electricity without resistance. In a charge-ordered state, interaction between electrons keeps them locked into a rigid pattern, which usually limits their ability to make the freely moving pairs required for superconductivity.

"Charge ordering is when every electron knows its place and stays there — in a superconductor, they know their place but they move in unison," Yazdani said. "It's almost like they freeze into this patterned charge-order state, and just before they become stuck they change their minds and do exactly the opposite."

The researchers' finding provides an important indication about the point at which a material potentially becomes an HTS, Yazdani said. From there, scientists may one day figure out how to enhance superconductivity, possibly even determining how it can occur at higher temperatures, he said.

There has been a previous indication of the interplay between the charge-order and superconducting states. Yazdani and his co-authors, however, combined atomic-scale microscopy and a new sensitive X-ray scattering technique to demonstrate that this phenomenon is ubiquitous across different families of copper-oxide superconductors. Their approach also presented a new method for visualizing the structure of a charge-order state and for more precisely identifying the state's relationship with superconductivity.

"Understanding and improving the properties of these materials is one of the grand challenges of our field," Yazdani said. "To make a charge-order state you use the same ingredients as a superconductor but at some point the electrons bifurcate into a state you want and the one you don't. In order to understand the one you want, you need to understand where they both came from."

Yazdani worked with co-first authors Eduardo da Silva Neto, who received his doctorate from Princeton and is now a postdoctoral researcher at the University of British Columbia, and Princeton postdoctoral researcher Pegor Aynajian, who recently became a physics professor at Binghamton University. Also involved were Princeton graduate student András Gyenis and researchers from Brookhaven National Laboratory, the Max Planck Institute for Solid State Research in Stuttgart, Germany, the Helmholtz-Zentrum Institute for Materials and Energy in Berlin, the University of British Columbia, and the Central Research Institute of Electric Power Industry in Tokyo.

The paper, "Ubiquitous interplay between charge ordering and high-temperature superconductivity in cuprates," was published Dec. 19 in the journal Science. The work was supported by the U.S. Department of Energy Basic Energy Sciences, the National Science Foundation (grant DMR1104612), the Eric and Wendy Schmidt Transformative Technology Fund, and the W.M. Keck Foundation.