A silicon-based quantum computing device could be closer than ever due to a new experimental device that demonstrates the potential to use light as a messenger to connect quantum bits of information — known as qubits — that are not immediately adjacent to each other. The feat is a step toward making quantum computing devices from silicon, the same material used in today's smartphones and computers. 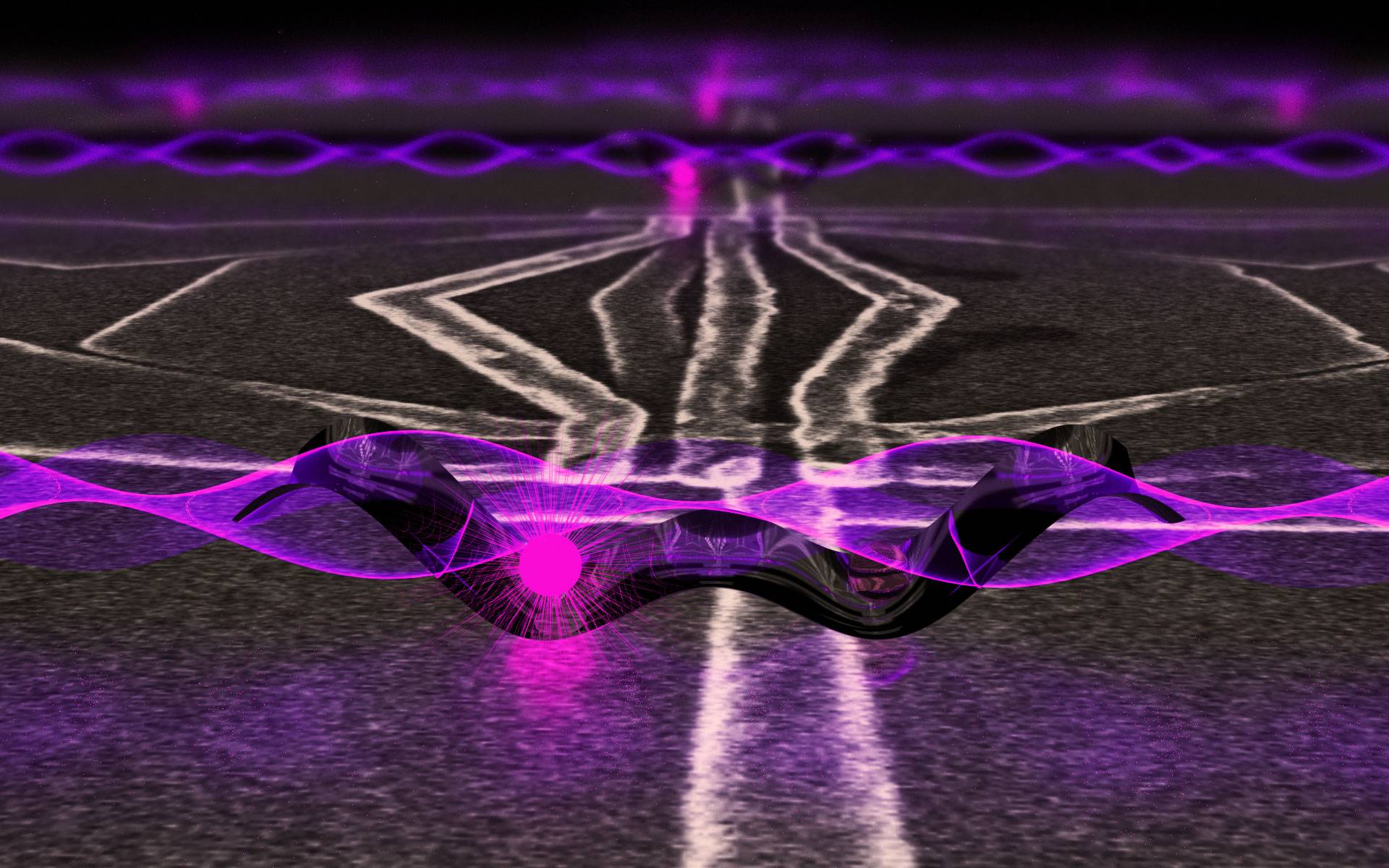 In a step forward for quantum computing in silicon — the same material used in today's computers — researchers successfully coupled a single electron's spin, represented by the dot on the left, to light, represented as a wave crossing over the double-welled silicon chamber, known as a quantum dot, where the electron is trapped. The goal is to use light as a messenger to convey the quantum information to other locations on a futuristic quantum computing chip.

The research, published in the journal Nature, was led by researchers at Princeton University in collaboration with colleagues at the University of Konstanz in Germany and the Joint Quantum Institute, which is a partnership of the University of Maryland and the National Institute of Standards and Technology.

The team created qubits from single electrons trapped in silicon chambers known as double quantum dots. By applying a magnetic field, they showed they could transfer quantum information, encoded in the electron property known as spin, to a particle of light, or photon, opening the possibility of transmitting the quantum information.

"This is a breakout year for silicon spin qubits," said Jason Petta, professor of physics at Princeton. "This work expands our efforts in a whole new direction, because it takes you out of living in a two-dimensional landscape, where you can only do nearest-neighbor coupling, and into a world of all-to-all connectivity," he said. "That creates flexibility in how we make our devices."

Quantum devices offer computational possibilities that are not possible with today's computers, such as factoring large numbers and simulating chemical reactions. Unlike conventional computers, the devices operate according to the quantum mechanical laws that govern very small structures such as single atoms and sub-atomic particles. Major technology firms are already building quantum computers based on superconducting qubits and other approaches.

"This result provides a path to scaling up to more complex systems following the recipe of the semiconductor industry," said Guido Burkard, professor of physics at the University of Konstanz, who provided guidance on theoretical aspects in collaboration with Mónica Benito, a postdoctoral researcher. "That is the vision, and this is a very important step."

Jacob Taylor, a member of the team and a fellow at the Joint Quantum Institute, likened the light to a wire that can connect spin qubits. "If you want to make a quantum computing device using these trapped electrons, how do you send information around on the chip? You need the quantum computing equivalent of a wire."

Silicon spin qubits are more resilient than competing qubit technologies to outside disturbances such as heat and vibrations, which disrupt inherently fragile quantum states. The simple act of reading out the results of a quantum calculation can destroy the quantum state, a phenomenon known as "quantum demolition." 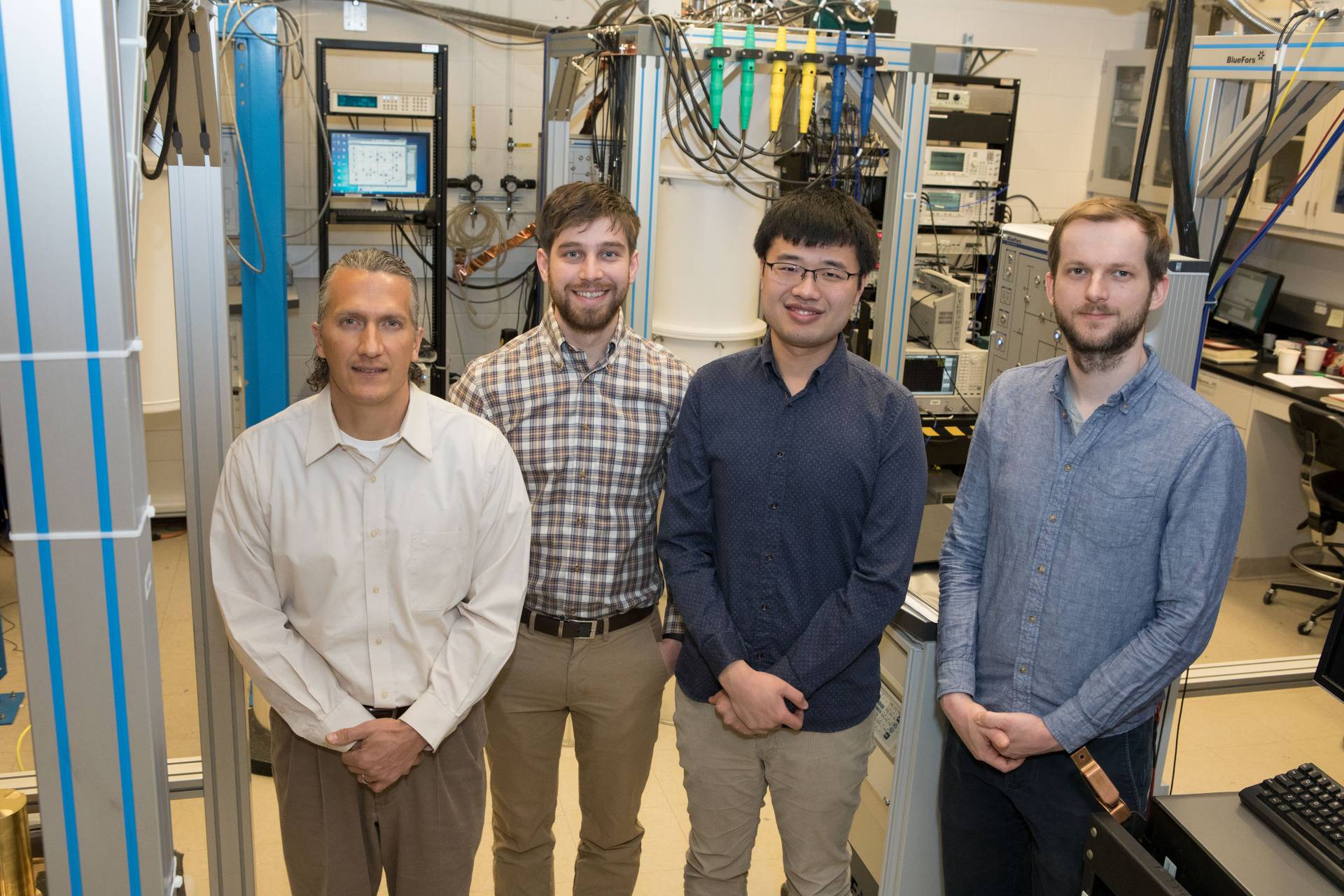 The researchers theorize that the current approach may avoid this problem because it uses light to probe the state of the quantum system. Light is already used as a messenger to bring cable and internet signals into homes via fiber optic cables, and it is also being used to connect superconducting qubit systems, but this is one of the first applications in silicon spin qubits.

Connecting silicon-based qubits so that they can talk to each other without destroying their information has been a challenge for the field. Although the Princeton-led team successfully coupled two neighboring electron spins separated by only 100 nanometers (100 billionths of a meter), as published in Science in December 2017, coupling spin to light, which would enable long-distance spin-spin coupling, has remained a challenge until now.

In the current study, the team solved the problem of long-distance communication by coupling the qubit's information — that is, whether the spin points up or down — to a particle of light, or photon, which is trapped above the qubit in the chamber. The photon's wave-like nature allows it to oscillate above the qubit like an undulating cloud.

Graduate student Xiao Mi and colleagues figured out how to link the information about the spin's direction to the photon, so that the light can pick up a message, such as "spin points up," from the qubit. "The strong coupling of a single spin to a single photon is an extraordinarily difficult task akin to a perfectly choreographed dance," Mi said. "The interaction between the participants — spin, charge and photon — needs to be precisely engineered and protected from environmental noise, which has not been possible until now." The team at Princeton included postdoctoral fellow Stefan Putz and graduate student David Zajac.

The advance was made possible by tapping into light's electromagnetic wave properties. Light consists of oscillating electric and magnetic fields, and the researchers succeeded in coupling the light's electric field to the electron's spin state.

The researchers did so by building on team's finding published in December 2016 in the journal Science that demonstrated coupling between a single electron charge and a single particle of light.

To coax the qubit to transmit its spin state to the photon, the researchers place the electron spin in a large magnetic field gradient such that the electron spin has a different orientation depending on which side of the quantum dot it occupies. The magnetic field gradient, combined with the charge coupling demonstrated by the group in 2016, couples the qubit's spin direction to the photon's electric field.

Ideally, the photon will then deliver the message to another qubit located within the chamber. Another possibility is that the photon's message could be carried through wires to a device that reads out the message. The researchers are working on these next steps in the process.

Several steps are still needed before making a silicon-based quantum computer, Petta said. Everyday computers process billions of bits, and although qubits are more computationally powerful, most experts agree that 50 or more qubits are needed to achieve quantum supremacy, where quantum computers would start to outshine their classical counterparts.

Daniel Loss, a professor of physics at the University of Basel in Switzerland who is familiar with the work but not directly involved, said: "The work by Professor Petta and collaborators is one of the most exciting breakthroughs in the field of spin qubits in recent years. I have been following Jason’s work for many years and I’m deeply impressed by the standards he has set for the field, and once again so with this latest experiment to appear in Nature. It is a big milestone in the quest of building a truly powerful quantum computer as it opens up a pathway for cramming hundreds of millions of qubits on a square-inch chip. These are very exciting developments for the field ­— and beyond."

The research was supported by the U.S. Department of Defense under contract H98230-15-C0453, Army Research Office grant W911NF-15-1-0149, and the Gordon and Betty Moore Foundation's EPiQS Initiative through grant GBMF4535. Devices were fabricated in the Princeton University Quantum Device Nanofabrication Laboratory.