In a step that brings silicon-based quantum computers closer to reality, researchers at Princeton University have built a device in which a single electron can pass its quantum information to a particle of light. The particle of light, or photon, can then act as a messenger to carry the information to other electrons, creating connections that form the circuits of a quantum computer.

The research, published today in the journal Science and conducted at Princeton and HRL Laboratories in Malibu, California, represents a more than five-year effort to build a robust capability for an electron to talk to a photon, said Jason Petta, a Princeton professor of physics. 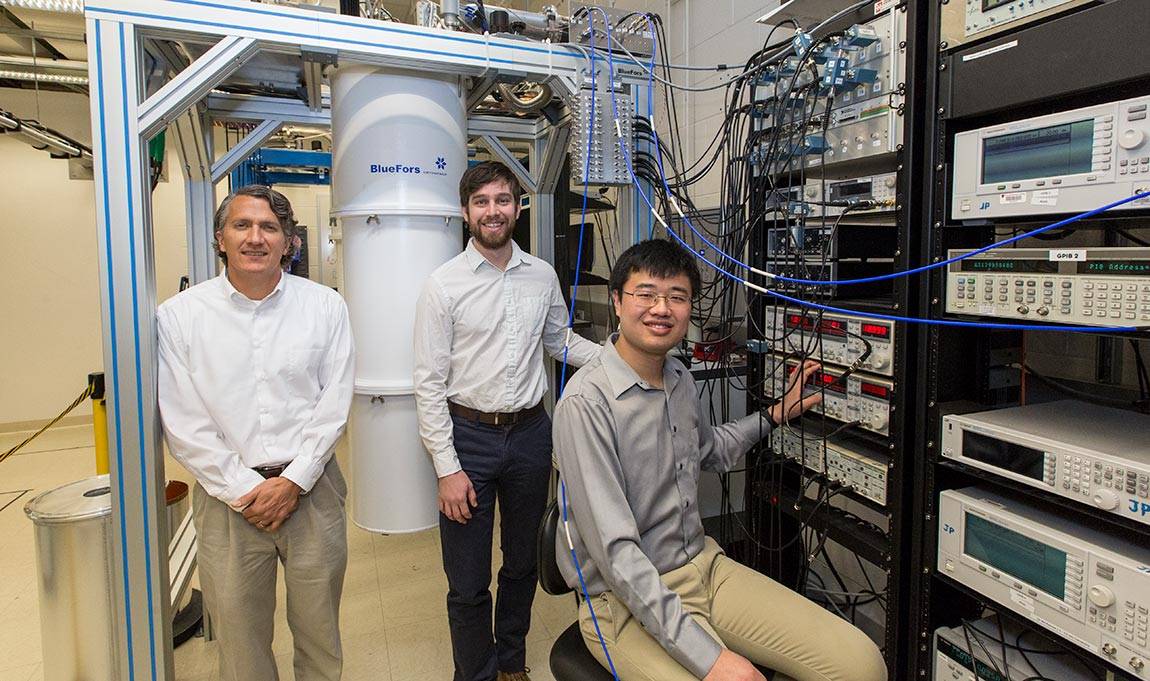 Princeton Professor of Physics Jason Petta, from left, and physics graduate students David Zajac and Xiao Mi, have built a device that is a step forward for silicon-based quantum computers, which when built will be able to solve problems beyond the capabilities of everyday computers. The device isolates an electron so that can pass its quantum information to a photon, which can then act as a messenger to carry the information to other electrons to form the circuits of the computer. (Photo by Denise Applewhite, Office of Communications)

"Just like in human interactions, to have good communication a number of things need to work out — it helps to speak the same language and so forth," Petta said. "We are able to bring the energy of the electronic state into resonance with the light particle, so that the two can talk to each other."

The discovery will help the researchers use light to link individual electrons, which act as the bits, or smallest units of data, in a quantum computer. Quantum computers are advanced devices that, when realized, will be able to perform advanced calculations using tiny particles such as electrons, which follow quantum rules rather than the physical laws of the everyday world.

Each bit in an everyday computer can have a value of a 0 or a 1. Quantum bits — known as qubits — can be in a state of 0, 1, or both a 0 and a 1 simultaneously. This superposition, as it is known, enables quantum computers to tackle complex questions that today's computers cannot solve.

Simple quantum computers have already been made using trapped ions and superconductors, but technical challenges have slowed the development of silicon-based quantum devices. Silicon is a highly attractive material because it is inexpensive and is already widely used in today's smartphones and computers. 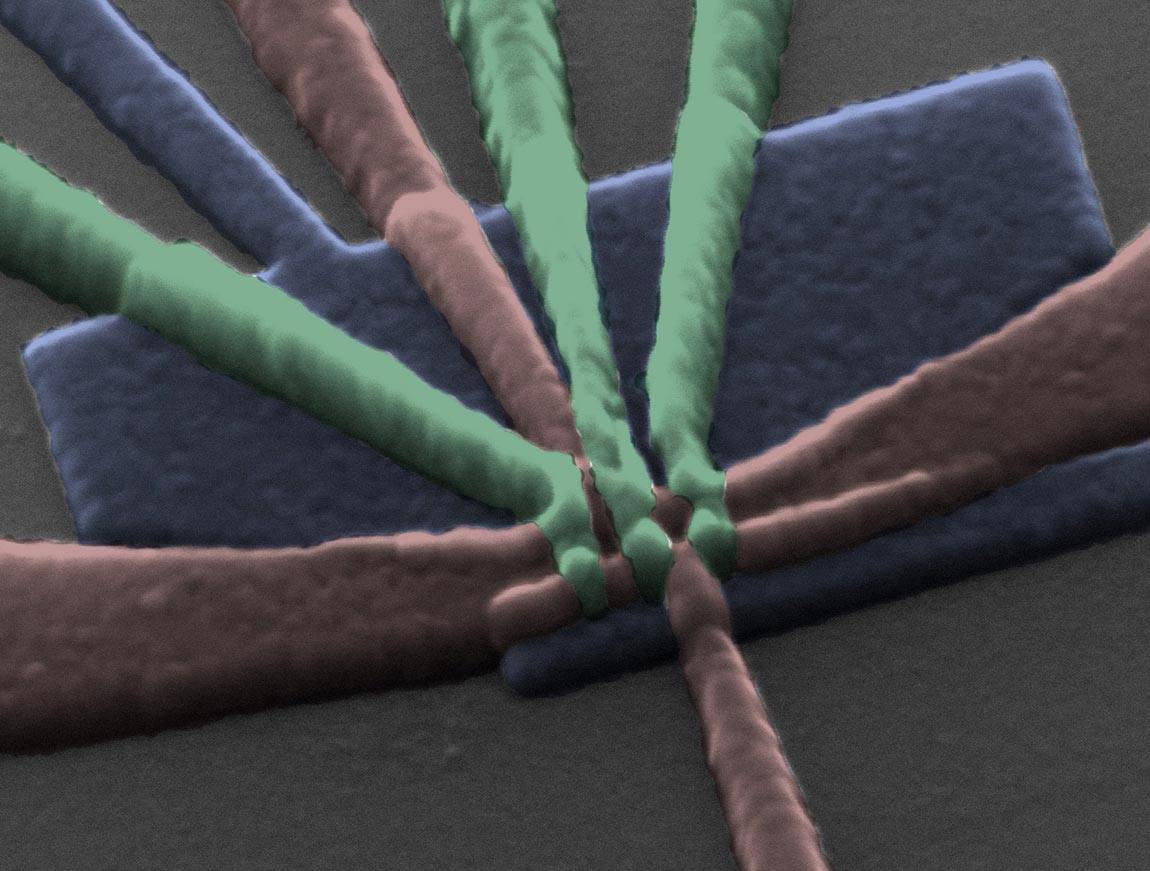 The qubit consists of a single electron that is trapped below the surface of a silicon chip (gray). The green, pink and purple wires on top of the silicon structure deliver precise voltages to the qubit. The purple plate reduces electronic interference that can destroy the qubit's quantum information. By adjusting the voltages in the wires, the researchers can trap a single electron in a double quantum dot and adjust its energy so that it can communicate its quantum information to a nearby photon. (Photo courtesy of the Jason Petta research group, Department of Physics)

The researchers trapped both an electron and a photon in the device, then adjusted the energy of the electron in such a way that the quantum information could transfer to the photon. This coupling enables the photon to carry the information from one qubit to another located up to a centimeter away.

Quantum information is extremely fragile — it can be lost entirely due to the slightest disturbance from the environment. Photons are more robust against disruption and can potentially carry quantum information not just from qubit to qubit in a quantum computer circuit but also between quantum chips via cables.

For these two very different types of particles to talk to each other, however, researchers had to build a device that provided the right environment. First, Peter Deelman at HRL Laboratories, a corporate research-and-development laboratory owned by the Boeing Company and General Motors, fabricated the semiconductor chip from layers of silicon and silicon-germanium. This structure trapped a single layer of electrons below the surface of the chip. Next, researchers at Princeton laid tiny wires, each just a fraction of the width of a human hair, across the top of the device. These nanometer-sized wires allowed the researchers to deliver voltages that created an energy landscape capable of trapping a single electron, confining it in a region of the silicon called a double quantum dot.

The researchers used those same wires to adjust the energy level of the trapped electron to match that of the photon, which is trapped in a superconducting cavity that is fabricated on top of the silicon wafer.

Prior to this discovery, semiconductor qubits could only be coupled to neighboring qubits. By using light to couple qubits, it may be feasible to pass information between qubits at opposite ends of a chip.

The electron's quantum information consists of nothing more than the location of the electron in one of two energy pockets in the double quantum dot. The electron can occupy one or the other pocket, or both simultaneously. By controlling the voltages applied to the device, the researchers can control which pocket the electron occupies.

"We now have the ability to actually transmit the quantum state to a photon confined in the cavity," said Xiao Mi, a graduate student in Princeton's Department of Physics and first author on the paper. "This has never been done before in a semiconductor device because the quantum state was lost before it could transfer its information." 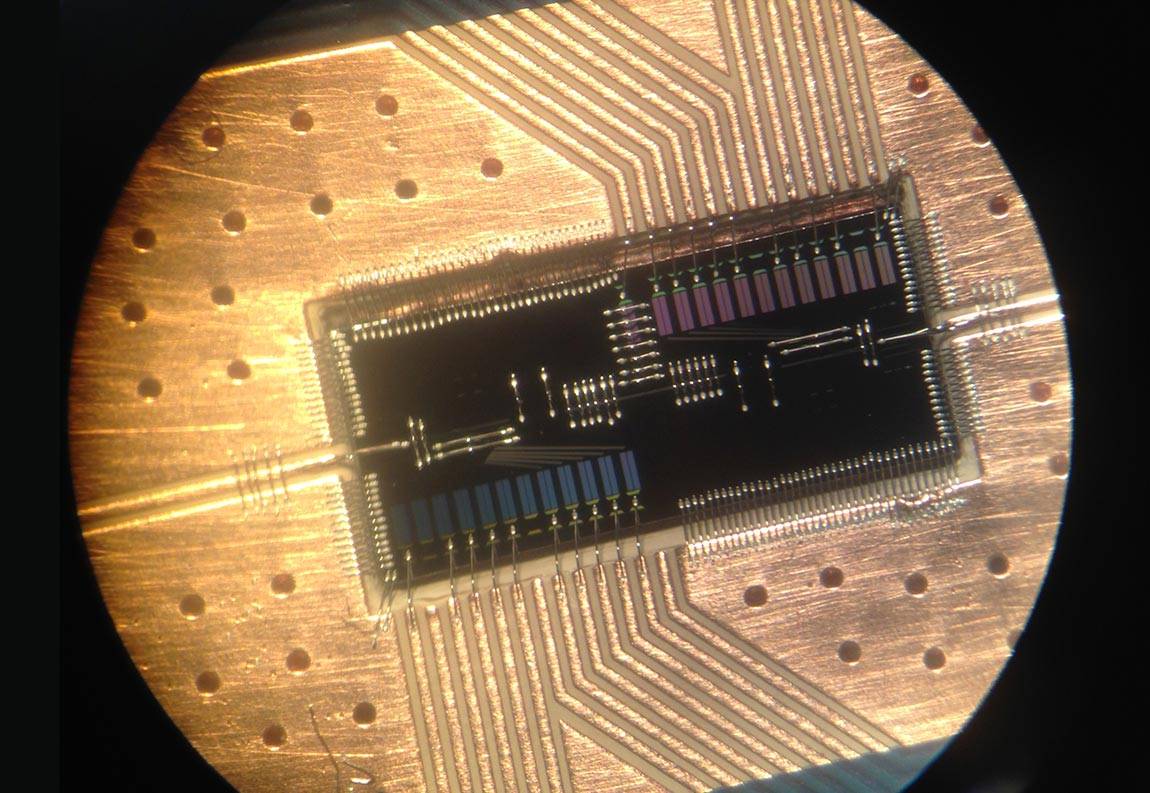 A fully packaged device for trapping and manipulating single electrons and photons. A series of on-chip electrodes (lower left and upper right) lead to the formation of a double quantum dot that confines a single electron below the surface of the chip. The photon, which is free to move within the full 7-millimeter span of the cavity, exchanges quantum information with the electron inside the double quantum dot. (Photo courtesy of the Jason Petta research group, Department of Physics)

The success of the device is due to a new circuit design that brings the wires closer to the qubit and reduces interference from other sources of electromagnetic radiation. To reduce this noise, the researchers put in filters that remove extraneous signals from the wires that lead to the device. The metal wires also shield the qubit. As a result, the qubits are 100 to 1,000 times less noisy than the ones used in previous experiments.

Jeffrey Cady, a 2015 graduate, helped develop the filters to reduce the noise as part of his undergraduate senior thesis, and graduate student David Zajac led the effort to use overlapping electrodes to confine single electrons in silicon quantum dots.

Eventually the researchers plan to extend the device to work with an intrinsic property of the electron known as its spin. "In the long run we want systems where spin and charge are coupled together to make a spin qubit that can be electrically controlled," Petta said. "We've shown we can coherently couple an electron to light, and that is an important step toward coupling spin to light."

David DiVincenzo, a physicist at the Institute for Quantum Information in RWTH Aachen University in Germany, who was not involved in the research, is the author of an influential 1996 paper outlining five minimal requirements necessary for creating a quantum computer. Of the Princeton-HRL work, in which he was not involved, DiVincenzo said: "It has been a long struggle to find the right combination of conditions that would achieve the strong coupling condition for a single-electron qubit. I am happy to see that a region of parameter space has been found where the system can go for the first time into strong-coupling territory."

Funding for this research was provided by Army Research Office grant No. W911NF-15-1-0149, the Gordon and Betty Moore Foundation's EPiQS Initiative through grant GBMF4535, and the National Science Foundation (DMR-1409556 and DMR-1420541). The material is based upon work supported by the U.S. Department of Defense under contract H98230-15-C0453.