Imagine a world where people could only talk to their next-door neighbor, and messages must be passed house to house to reach far destinations.

Until now, this has been the situation for the bits of hardware that make up a silicon quantum computer, a type of quantum computer with the potential to be cheaper and more versatile than today's versions.

Now a team based at Princeton University has overcome this limitation and demonstrated that two quantum-computing components, known as silicon "spin" qubits, can interact even when spaced relatively far apart on a computer chip. The study was published in the journal Nature. 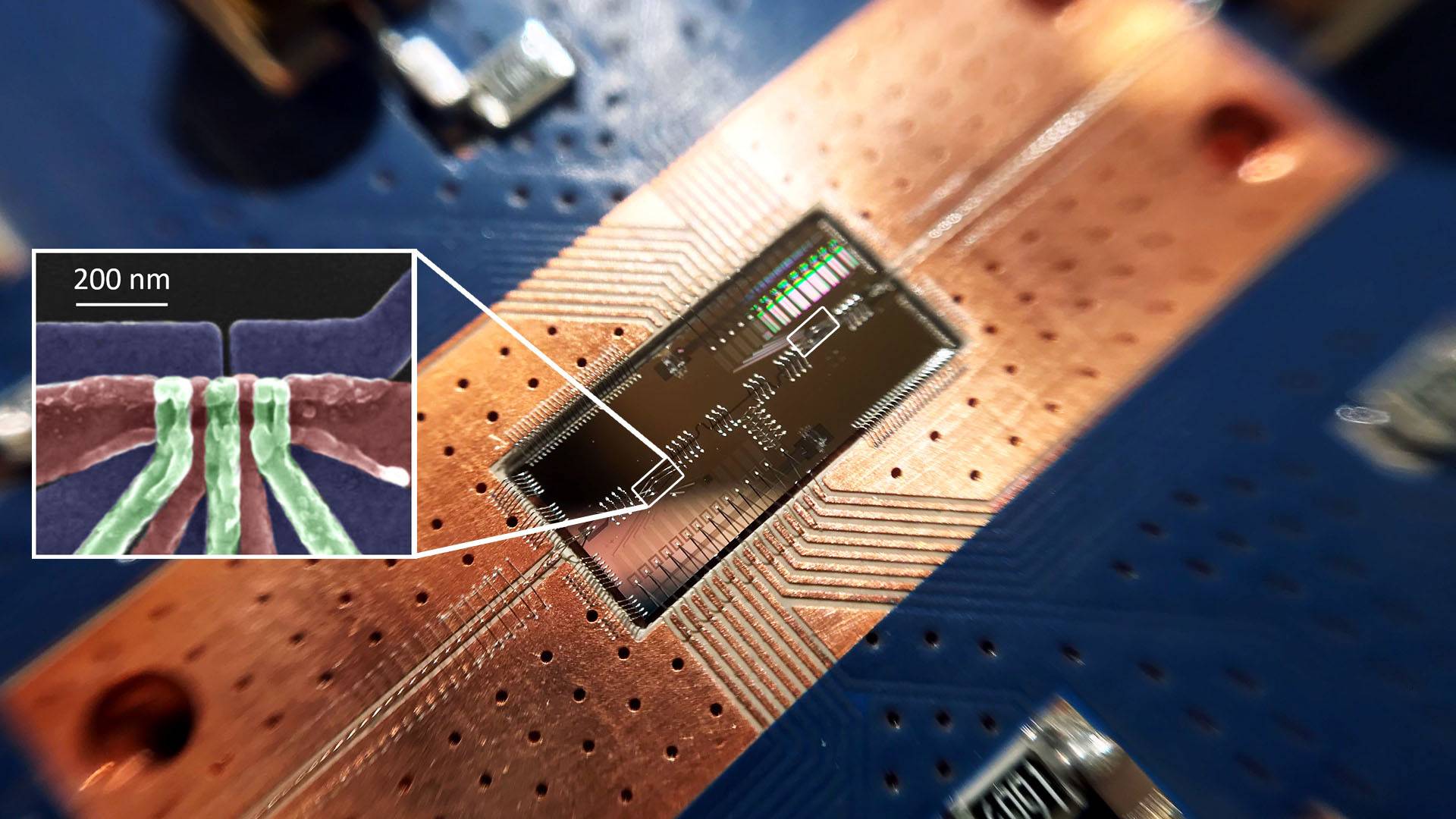 Researchers at Princeton University have made an important step forward in the quest to build a quantum computer using silicon components, which are prized for their low cost and versatility compared to the hardware in today's quantum computers. The team showed that a silicon-spin quantum bit (shown in the box) can communicate with another quantum bit located a significant distance away on a computer chip. The feat could enable connections between multiple quantum bits to perform complex calculations.

"The ability to transmit messages across this distance on a silicon chip unlocks new capabilities for our quantum hardware," said Jason Petta, the Eugene Higgins Professor of Physics at Princeton and leader of the study. "The eventual goal is to have multiple quantum bits arranged in a two-dimensional grid that can perform even more complex calculations. The study should help in the long term to improve communication of qubits on a chip as well as from one chip to another."

Quantum computers have the potential to tackle challenges beyond the capabilities of everyday computers, such as factoring large numbers. A quantum bit, or qubit, can process far more information than an everyday computer bit because, whereas each classical computer bit can have a value of 0 or 1, a quantum bit can represent a range of values between 0 and 1 simultaneously.

To realize quantum computing's promise, these futuristic computers will require tens of thousands of qubits that can communicate with each other. Today's prototype quantum computers from Google, IBM and other companies contain tens of qubits made from a technology involving superconducting circuits, but many technologists view silicon-based qubits as more promising in the long run.

Silicon spin qubits have several advantages over superconducting qubits. The silicon spin qubits retain their quantum state longer than competing qubit technologies. The widespread use of silicon for everyday computers means that silicon-based qubits could be manufactured at low cost.

The challenge stems in part from the fact that silicon spin qubits are made from single electrons and are extremely small.

"The wiring or 'interconnects' between multiple qubits is the biggest challenge towards a large scale quantum computer," said James Clarke, director of quantum hardware at Intel, whose team is building silicon qubits using using Intel's advanced manufacturing line, and who was not involved in the study. "Jason Petta’s team has done great work toward proving that spin qubits can be coupled at long distances."

To accomplish this, the Princeton team connected the qubits via a "wire" that carries light in a manner analogous to the fiber optic wires that deliver internet signals to homes. In this case, however, the wire is actually a narrow cavity containing a single particle of light, or photon, that picks up the message from one qubit and transmits it to the next qubit.

The two qubits were located about half a centimeter, or about the length of a grain of rice, apart. To put that in perspective, if each qubit were the size of a house, the qubit would be able to send a message to another qubit located 750 miles away.

The key step forward was finding a way to get the qubits and the photon to speak the same language by tuning all three to vibrate at the same frequency. The team succeeded in tuning both qubits independently of each other while still coupling them to the photon. Previously the device's architecture permitted coupling of only one qubit to the photon at a time.

"You have to balance the qubit energies on both sides of the chip with the photon energy to make all three elements talk to each other," said Felix Borjans, a graduate student and first author on the study. "This was the really challenging part of the work."

Each qubit is composed of a single electron trapped in a tiny chamber called a double quantum dot. Electrons possess a property known as spin, which can point up or down in a manner analogous to a compass needle that points north or south. By zapping the electron with a microwave field, the researchers can flip the spin up or down to assign the qubit a quantum state of 1 or 0.

"This is the first demonstration of entangling electron spins in silicon separated by distances much larger than the devices housing those spins," said Thaddeus Ladd, senior scientist at HRL Laboratories and a collaborator on the project. "Not too long ago, there was doubt as to whether this was possible, due to the conflicting requirements of coupling spins to microwaves and avoiding the effects of noisy charges moving in silicon-based devices. This is an important proof-of-possibility for silicon qubits because it adds substantial flexibility in how to wire those qubits and how to lay them out geometrically in future silicon-based 'quantum microchips.'"

The communication between two distant silicon-based qubits devices builds on previous work by the Petta research team. In a 2010 paper in the journal Science, the team showed it is possible to trap single electrons in quantum wells. In the journal Nature in 2012, the team reported the transfer of quantum information from electron spins in nanowires to microwave-frequency photons, and in 2016 in Science they demonstrated the ability to transmit information from a silicon-based charge qubit to a photon. They demonstrated nearest-neighbor trading of information in qubits in 2017 in Science. And the team showed in 2018 in Nature that a silicon spin qubit could exchange information with a photon. 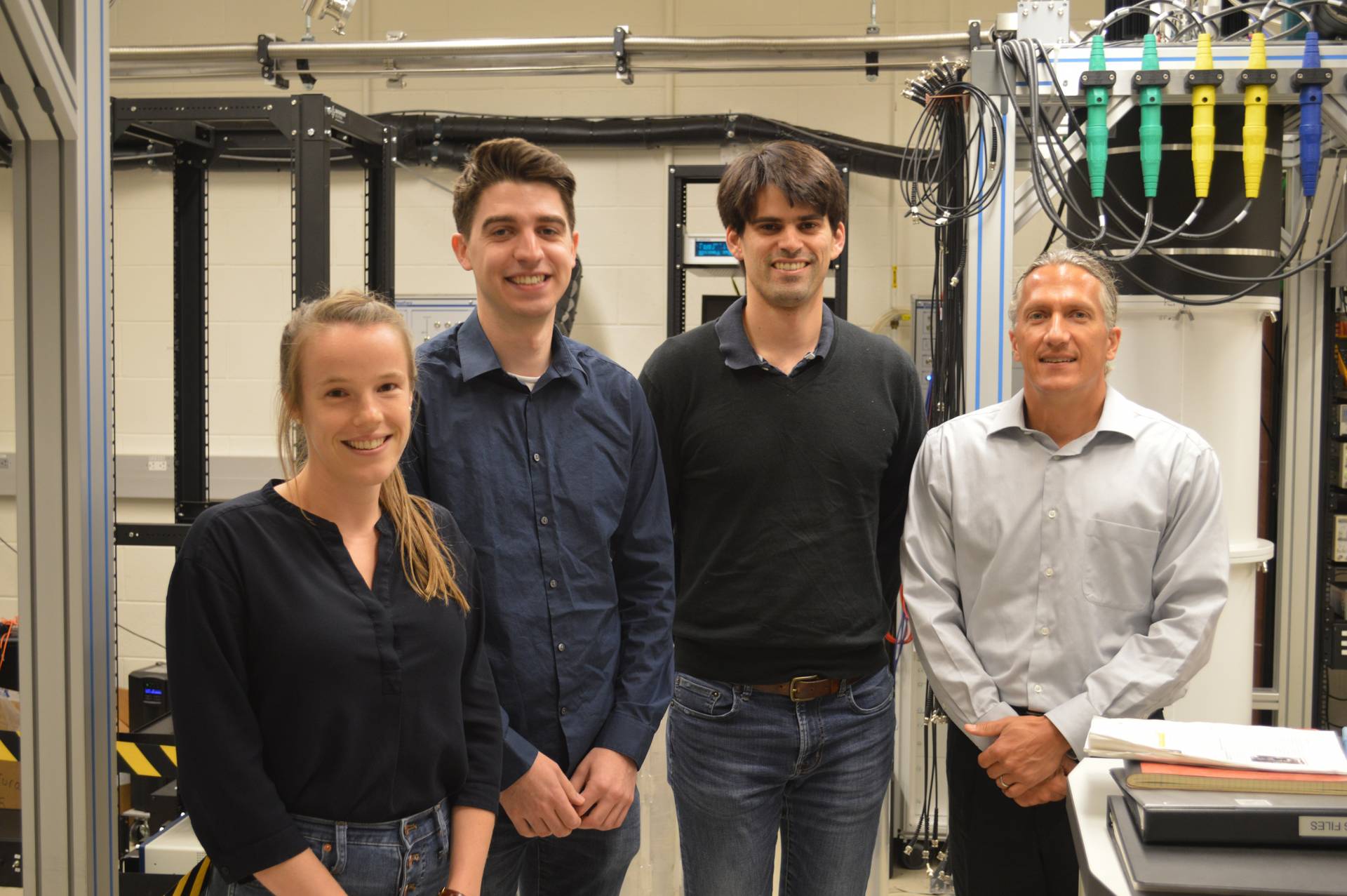 Photo by
Catherine Zandonella, Office of the Dean for Research

Jelena Vuckovic, professor of electrical engineering and the Jensen Huang Professor in Global Leadership at Stanford University, who was not involved in the study, commented: "Demonstration of long-range interactions between qubits is crucial for further development of quantum technologies such as modular quantum computers and quantum networks. This exciting result from Jason Petta's team is an important milestone towards this goal, as it demonstrates non-local interaction between two electron spins separated by more than 4 millimeters, mediated by a microwave photon. Moreover, to build this quantum circuit, the team employed silicon and germanium - materials heavily used in the semiconductor industry."

In addition to Borjans and Petta, the following contributed to the study: Xanthe Croot, a Dicke postdoctoral fellow; associate research scholar Michael Gullans; and Xiao Mi, who earned his Ph.D. at Princeton in Petta’s group and is now a research scientist at Google.