Two exploratory and promising research projects — a quantum computer based on a recently observed exotic particle and a smartphone that could replace laboratory tests in health care settings — have been awarded funding at Princeton University through the Eric and Wendy Schmidt Transformative Technology Fund.

The fund, established in 2009 by Google executive chairman Eric Schmidt, a 1976 Princeton alumnus and former trustee, and his wife, Wendy, supports projects with the potential for broad impact on research in the natural sciences or engineering. The fund aims to foster technologies that are likely to have a major impact on the direction of research in a field.

"These two projects push the boundaries of what is currently possible, and each aims to develop an entirely new technology that fulfills a demonstrated need in research or in society," said Princeton's Dean for Research Pablo Debenedetti, the Class of 1950 Professor in Engineering and Applied Science and professor of chemical and biological engineering. "The Schmidt family, through their generosity, enables Princeton to fund projects that involve risk-taking, knowing that with risk comes the potential for tremendous rewards."

The winning projects were selected following a competitive submission process that included review by a panel of University referees and external consultants. The projects were evaluated on the overall quality and innovative nature of the research being proposed as well as the significance and likely impact on the field.

A quantum computer based on Majorana quasi-particles

Quantum computers harness the extraordinary potential of quantum physics, which affects extremely small objects at low temperatures, to conduct calculations that ordinary computers cannot begin to solve. Yet achieving the goal of building such a computer has remained out of reach because such devices are extremely sensitive to any environmental disturbances.

Three researchers in the Department of Physics have been awarded $835,000 to harness quantum phenomena involving an exotic particle known as the Majorana fermion as the basis of a quantum computer.

The research team is composed of B. Andrei Bernevig, associate professor of physics; N. Phuan Ong, the Eugene Higgins Professor of Physics; and Ali Yazdani, professor of physics. Together, the three will explore methods for making a computational device that uses Majorana quasi-particles as quantum bits, or qubits, which are analogous to the bits used in today's computers. 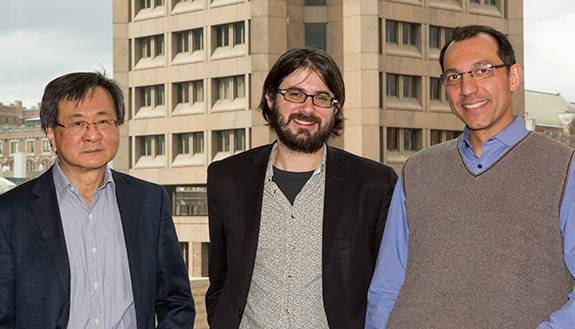 Majorana fermions can act as the basic units of quantum computation — replacing the ones and zeros in today's computers — because their unique composition makes them immune to interference from the outside world. First proposed by physicist Ettore Majorana in the 1930s, the elusive particle was directly observed only recently. Last fall, Yazdani's team, in collaboration with Bernevig, made the first direct observation of Majorana fermions at the ends of a nanometer-thin wire made of iron embedded on a superconducting surface made of lead. The team captured images of the particle using scanning tunneling microscopy and published the results in the journal Science.

In this magnetic and superconducting solid-state environment, the Majorana fermion can be thought of as acting like one-half of an electron. "You can think of a Majorana like taking one electron that has been pulled apart into two components that don't talk to each other," Bernevig said. "Any disturbance would have to affect both of the now far-away halves to destroy the computation."

With the Schmidt funding, the team plans to explore making the particles more robust in a setting compatible with semiconductor fabrication methods. Yazdani's team will experiment with different magnetic and superconducting materials to both produce and control the particles. "Being able to manipulate these particles in a device-like setting is where the future lies," Yazdani said.

Bernevig will provide theoretical input on the process of coaxing each half of the split electron to interact to produce quantum calculations, a process known as braiding. "The actual computation involves taking one Majorana around another, or other more complicated processes, requiring us to devise a way to manipulate their movement," Bernevig said.

Ong's team will explore fabrication methods that will enable the particles to form in a two-dimensional magnetic film rather than a nanowire, enhancing the number of particles that can be used in calculations. "We plan to use a magnetic field to move the Majorana within a circle," Ong said. "That is the first step toward exchanging them." His team will also develop a method to track the behavior of the particles.

The funding from the Schmidt family will enable the team to conduct research that is extremely promising yet constitutes an unexplored area of quantum computing, Yazdani said. "The principle of the fund is to support transformative, high-risk, high-payoff projects that are very early in the process," Yazdani said, "and our team at Princeton is one of the few that are capable of conducting this work."

A smartphone that conducts medical tests

Modern medical testing allows doctors to diagnose and treat conditions that once would have been fatal or debilitating. But for many people around the world, the lack of access to medical tests means that diseases and injuries go unrecognized and untreated. 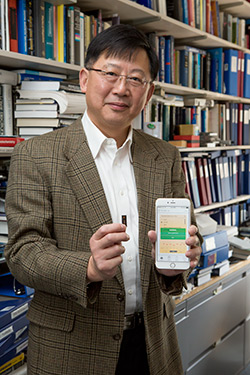 With a smartphone and small sensor called an M-Plate, electrical engineering professor Stephen Chou and his research team are working to develop new methods to expand access to and accelerate diagnostic medical tests.

A Schmidt Award in the amount of $500,000 will support the development of a method that could help solve this problem by allowing a common smartphone to conduct medical tests now only available in sophisticated laboratories. The initial phase of the project concentrates on traumatic brain injury, which affects millions of people worldwide.

"Traumatic brain injury often goes undiagnosed," said Stephen Chou, the Joseph C. Elgin Professor of Engineering and the leader of the research team. "Current diagnostics for brain injury are often not easily accessible and they are not always effective."

Chou's team is working on a sensor, called an M-Plate, that could diagnose a variety of medical conditions with a few drops of a person's blood or saliva. The sensor, which is smaller than a camera's SD storage card, would detect biological markers produced inside the human body that indicate an injury or disease. The plate uses a chemical reaction to create fluorescence in the presence of these markers.

Developing the smartphone test presents several significant challenges. The first is sensitivity. An at-home test would need to work with a blood sample 1,000 times smaller than the amount of blood drawn for a conventional lab test. Such a small sample would require a vastly more sensitive device to produce a reliable result. This increased sensitivity is of broad interest in the medical diagnostics business and could lead to other benefits such as earlier detection of cancer, Chou said.

A second challenge is how to make the tiny amount of blood move into the detection area of the sensor and make the reaction occur quickly. Third, Chou's team must also develop a specialized filter for both the smartphone's camera and its flash, because neither is well suited for chemical identification. The researchers are designing new lenses and filters that are thinner than a piece of paper and that incorporate features much smaller than the wavelength of light. Chou has a longstanding expertise with so-called subwavelength optical elements.

Lastly, Chou's team will need to integrate these components and write software for data analysis and communication.

If the project succeeds, the user would simply photograph the M-Plate with a smartphone. The software would interpret the optical signal of biomarkers from the plate and give immediate advice to the user. The smartphone also could transmit the data to a remote doctor or hospital. Chou's team is working with a color-coded display that indicates five levels of detection, the highest of which recommends immediate medical attention.

"The method is very simple," Chou said, adding that he believes that operating the device will require no formal training.

Chou's initial work on the brain injury test recently received support from the Gates Foundation's Grand Challenges in Global Health. Chou said the U.S. Centers for Disease Control and Prevention reports there are over 1.7 million cases of traumatic brain injury in the U.S. each year, with about one-third of those occurring in children. Worldwide, the number is much higher.

As the work develops, Chou said the team plans to expand the testing to other health conditions with an eye toward reducing costs as well as expanding people's access to mobile personal health care.

"We believe we can apply this smartphone rapid diagnostic method to many conditions that today require sophisticated laboratories for detection and diagnosis," he said.