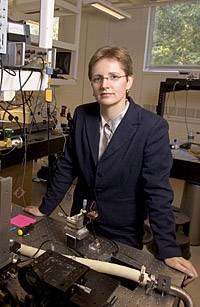 Princeton engineer Claire Gmachl has been selected as a 2005 MacArthur Fellow for her research on highly versatile lasers that could be used in fields ranging from environmental monitoring to medical diagnostics and homeland security.

The John D. and Catherine T. MacArthur Foundation announced Sept. 20 that Gmachl is among 25 scholars, scientists and artists who each will receive $500,000 in unrestricted support over the next five years. The awards, known informally as "genius grants," are given to people from a broad range of fields who "demonstrate exceptional creativity and promise."

Gmachl is the third Princeton scientist or engineer, all women, to have won a MacArthur Fellowship in the last four years. Bonnie Bassler, a professor of molecular biology, won in 2002, and Naomi Leonard, a professor of mechanical and aerospace engineering, won in 2004.

This year's winners also included photographer Fazal Sheikh, a 1987 graduate of Princeton in art and archaeology, and Emily Thompson, a 1992 graduate alumna who is an aural historian and associate professor of history at the University of California-San Diego. The foundation cited Sheikh for "using the personalizing power of portraiture to bring the faces of the world's displaced people into focus," and Thompson, who earned her Ph.D. from Princeton in the history of science, for recovering "an important history of our time" by "charting the transformation of the elusive and ephemeral phenomenon of sound."

Gmachl (pronounced geh-MAHK-el), an associate professor of electrical engineering, is a pioneer in creating quantum cascade lasers. The MacArthur Foundation called her a "wizard at imagining and creating new designs" for such devices. The lasers are built by stacking atomically thin layers of materials into wafers that are smaller than a watermelon seed. Electrons fall or "cascade" through the layers, emitting light at each step. The devices are less complex and more reliable than current lasers and can be tuned to emit light in parts of the spectrum that most other lasers cannot produce.

"Claire is an amazing person," said Maria Klawe, dean of Princeton's School of Engineering and Applied Science. "She has a deep understanding of basic physics, but also can translate that knowledge into technology that will have a major impact on many areas of society. She is an inspiration to any student who wants to work in science, be creative and make a difference."

Among many potential uses, quantum cascade lasers could detect trace gasses in people's breath to reveal the presence of lung, kidney, liver and other disorders. They also could be used to monitor smokestack or tailpipe emissions and many other environmental factors. Military researchers are interested in the technology for detecting explosives or chemical weapons.

"What fascinates me about this work is that we are making designer materials," Gmachl said. "By being creative, you can trick these new materials into doing something that is not available in nature."

Gmachl said the new laser devices offer so much flexibility that even some of the most far-fetched ideas proposed in her lab have been made to work. Finding funding to pursue such ideas, however, is not easy, and that is why Gmachl plans to use the MacArthur award to support "some really far-out projects" that she has not yet tried or even proposed.

"I am extremely happy to have this support," said Gmachl, who learned of the award while she was at a conference on Cape Cod. "I am very thankful to my peers and my research group, which works so hard with me. Without this support team, there is no way to win such an award."

Gmachl, a native of Austria, earned her Ph.D. in 1995 from the Technical University of Vienna. She came to Princeton University in 2003 after working for eight years on the research and technical staffs of Bell Laboratories, where she joined the group that built the first quantum cascade laser. Her current research, supported primarily by grants from the Defense Advanced Research Projects Administration and the National Science Foundation, is aimed at improving the performance of and developing new types of quantum cascade lasers and at understanding the basic physics behind the materials and structures used in the lasers.