Mark Zondlo’s research team has tracked greenhouse gases and air pollutants on the streets of Beijing and New York City, around Pennsylvania gas wells, and near animal feedlots in Colorado and California.

These experiments typically take six months of planning, but this year the lab geared up quickly for a time-sensitive mission: monitoring air quality on Hawaii’s Big Island during the large eruption of the Kilauea volcano. Between May and August, lava flows destroyed around 700 homes. About 2,500 residents evacuated areas close to the active fissures, and many experienced breathing problems from the volcanic ash and gases. 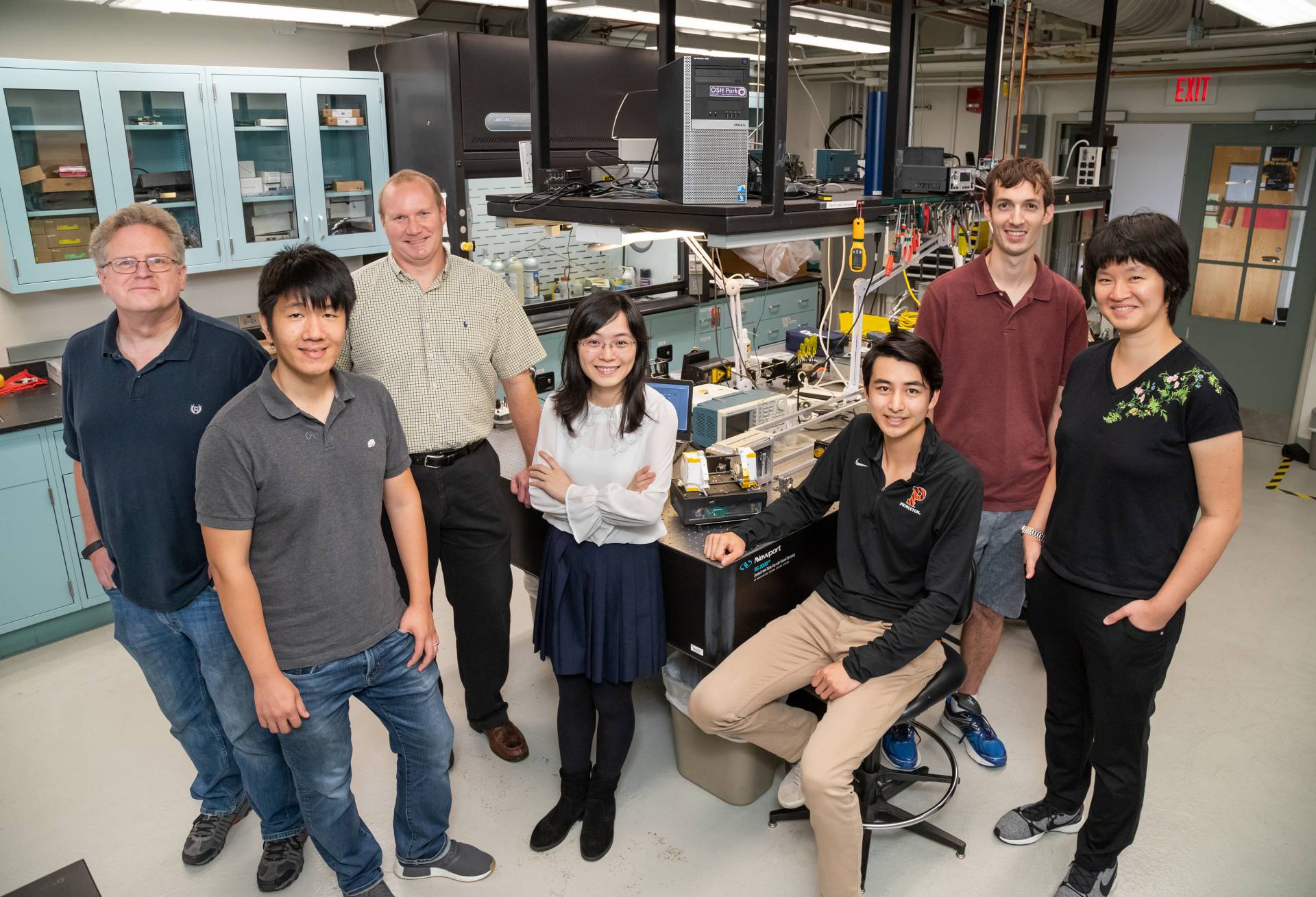 “This was an opportunity to do something helpful,” said Zondlo, an associate professor in Princeton’s Department of Civil and Environmental Engineering and associate director of external partnerships in the Andlinger Center for Energy and the Environment. Zondlo was asked to take measurements during the eruption in his capacity as a member of the NASA Health and Air Quality Applied Sciences Team (HAQAST), which helps public health and air quality agencies make use of NASA satellite data.

The team’s data and analyses will help public health officials and scientists better understand how volcanoes influence air quality and how changes in air quality might be associated with health effects. 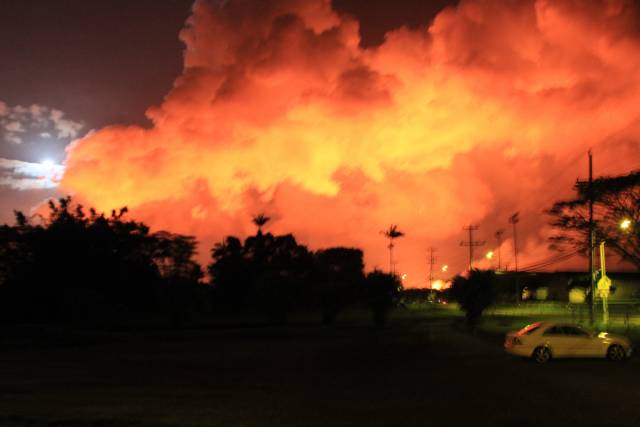 During the eruption of Kilauea on Hawaii's Big Island, lava reflecting off clouds and smoke produced an orange plume in the night sky.

Among volcanic gases, sulfur dioxide poses the most significant risk to public health; it can irritate the eyes, skin and respiratory system. Combined with other molecules in the atmosphere, sulfur dioxide forms fine particles that can travel deep into the lungs: “It gets you in two ways,” said Zondlo. Sulfur dioxide is a key component of vog, the volcanic smog that often reduces visibility in Hawaii.

As part of a project called the Princeton Atmospheric Chemistry Experiment (PACE), in 2013 and 2014 Zondlo’s group developed and operated a suite of gas sensors that detect carbon dioxide, methane, ammonia and other pollutants. The sensors, mounted atop cars and powered by car batteries, are more transportable and use less energy than most monitoring systems. The sensors use lasers that emit light at near-infrared and mid-infrared wavelengths, developed at Princeton’s Center for Mid-Infrared Technologies for Health and the Environment. 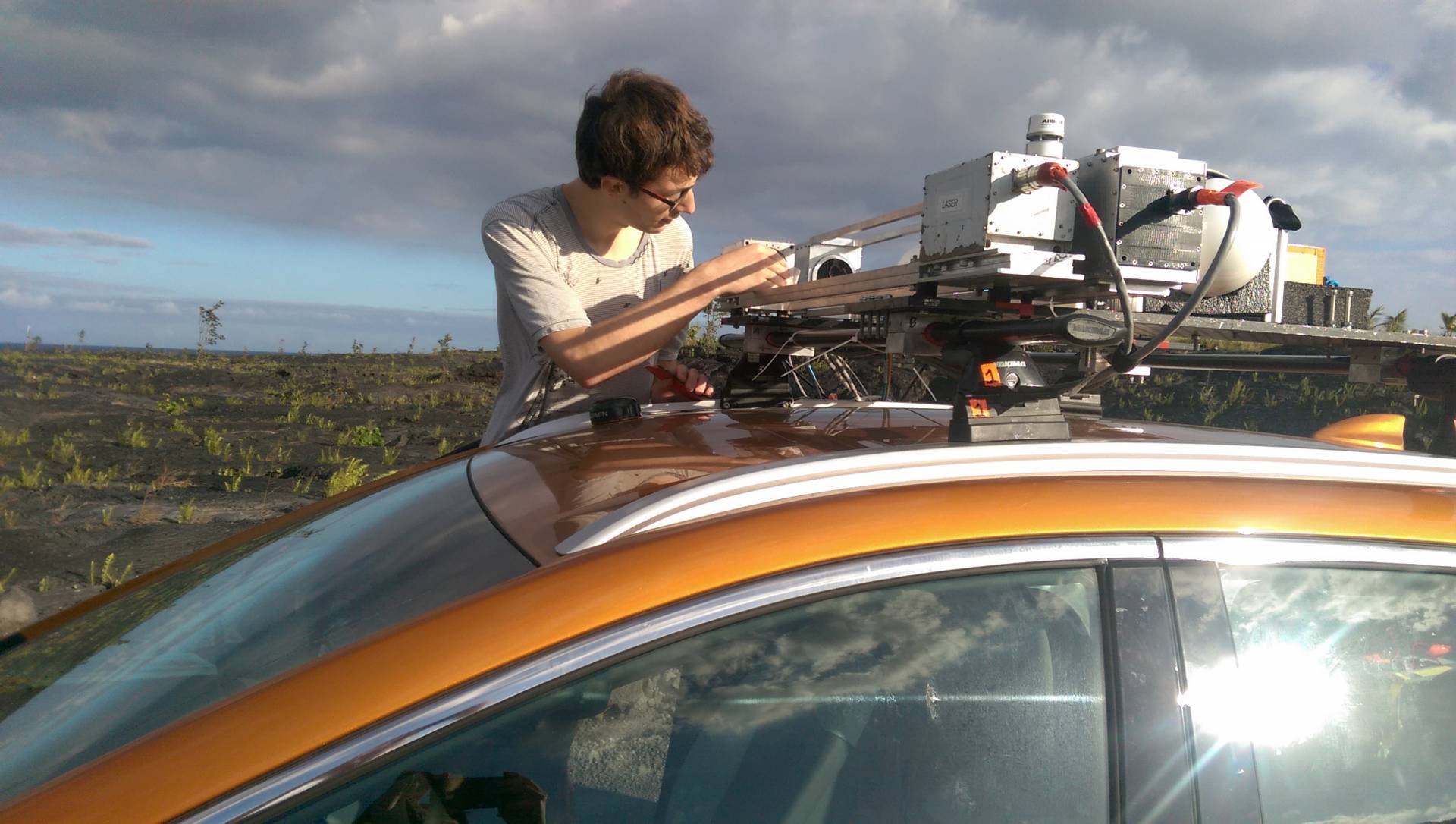 Members of Mark Zondlo’s lab used a suite of gas sensors to monitor air quality on Hawaii’s Big Island during the summer 2018 eruption of the Kilauea volcano. Here, graduate student Levi Golston adjusts the sensors, which are mounted atop a car and powered by car batteries.

The team dubbed its Hawaii project the Laboratory for Atmospheric Vog Analysis, or LAVA. While driving around and across the 4,000-square-mile island for three weeks, the researchers recorded continuous measurements of seven air pollutants, as well as meteorological data on wind speed and direction, temperature, and humidity. 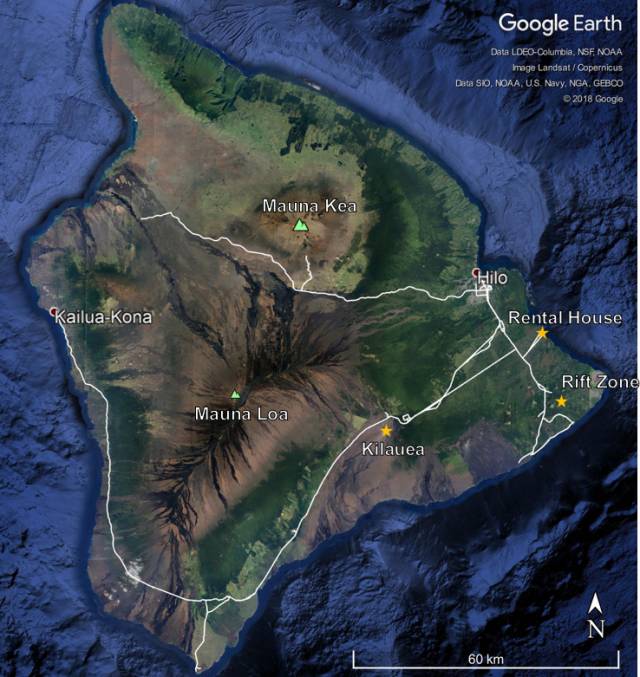 A map showing the driving routes the Zondlo team took to sample air quality on Hawaii’s Big Island during and after the eruption of the Kilauea volcano. The team worked in three overlapping shifts while staying in a rental house near Pāhoa on the east end of the island, about 20 miles south of the town of Hilo and 10 miles from the volcano’s most actively erupting fissure.

“Volcano emissions are lofted into the atmosphere,” said Zondlo. In the case of sulfur dioxide, satellite data have difficulty resolving concentrations at different heights, “so the plume [of volcanic gas] could be lofted well above the surface, and the air quality could be perfectly fine at the surface. That’s why we need surface networks.”

During July and August, every member of Zondlo’s lab traveled to Hawaii to join the project, including five graduate students, two staff members, a summer research student and a high school teacher who has worked with the lab for several years. The team worked in three overlapping shifts while staying in a rental house near Pāhoa on the east end of the island, about 20 miles south of the town of Hilo and 10 miles from the volcano’s most actively erupting fissure.

“It was uncomfortably awesome,” said Zondlo. “From the house, you could see the laze [lava haze] from the lava hitting the ocean. At night, you’d see this huge orange plume in the sky from all the lava reflecting off the clouds and the smoke.”

Each evening, the team planned the next day’s sampling route by consulting the University of Hawaii’s vog model, which combines estimates of volcano emissions with wind forecasts to predict which regions are likely to have the highest concentrations of sulfur dioxide and fine particles. They also reviewed initial observations from the team that had just finished the field sampling that same day.

With help from Princeton’s Procurement Services office, Zondlo gained access to an all-electric Chevrolet Bolt — the same type of vehicle his team uses for mobile monitoring studies in Princeton and New York City. Having an electric car is helpful because the exhaust from a gasoline-powered car would interfere with the sensors’ measurements.

In groups of three, the researchers spent as much as eight hours per day driving around the island, covering large stretches of coastline as well as the Saddle Road that traverses the island and climbs to an elevation of more than 6,000 feet as it skirts the slope of the dormant volcano Mauna Kea. They took breaks to recharge the car’s battery, and sometimes had to stop driving due to the heavy downpours common on the Big Island, said Da Pan and Levi Golston, two graduate students in Zondlo’s lab. 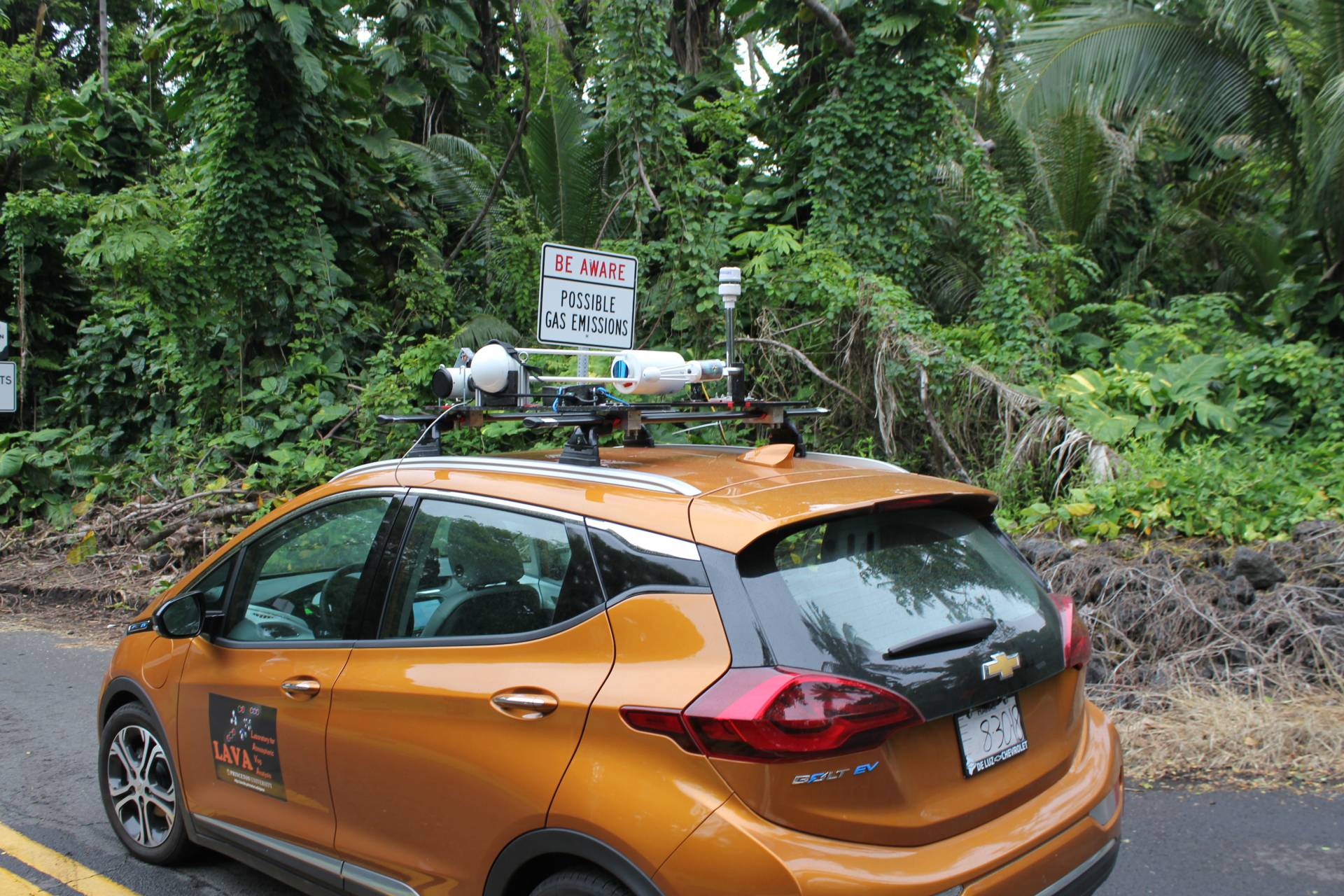 The researchers spent as much as eight hours per day driving around the island to monitor air quality. In some places, road signs warned of hazardous conditions resulting from volcanic emissions.

Unexpectedly, the eruption of Kilauea stopped dramatically within days of the group beginning sampling. “Our idea of measuring high concentrations downwind of the source, a couple of miles away, kind of went out the window,” said Golston.

The team’s work was also cut short by Hurricane Lane, which caused severe flooding on the Big Island in late August. Although the timing was somewhat disappointing, said Zondlo, “scientifically it’s probably much more interesting than if we had just measured a bunch of vog continuously for 22 days.”

“The air quality didn’t instantaneously get better as the older lava flowed to the ocean and some emissions still occurred,” he noted. “So, it was kind of nice that we actually measured that transition.”

Because trade winds sweep west or southwest across Hawaii, the west coast and southern tip of the island — areas as much as 100 miles away from the volcano — tend to experience poor air quality during an active eruption, a phenomenon Zondlo’s group sought to document in detail. Remarkably, in mid-August the west side of the island enjoyed some of its cleanest air in a decade, providing a baseline to inform the lab’s analysis, Zondlo said.

Now, the team is working to integrate its mobile sampling data with information from ground stations and satellite images. They plan to create a map of air quality gradients under each wind condition to better understand pollution levels based on the data available during the eruption in May, June and July.

“Every data set has its unique challenges and advantages, and if you can take the best of all of them you get a much more complete and accurate picture,” said Zondlo.

Through his connection with NASA’s Applied Science Program, Zondlo will present his lab’s findings to air quality and public health agencies. With high-resolution maps of air quality, epidemiologists may be able to examine associations between pollution levels and hospital admissions for respiratory and cardiovascular problems. Previous studies have shown that elevated levels of fine particles, which often occurred on the Big Island during the eruption, negatively impact health, said Zondlo.

“The State of Hawaii Clean Air Branch has a fairly small air quality program relative to more populous states,” explained Tom Moore, air quality program manager for the Western Regional Air Partnership, a consortium of 15 Western states that includes Hawaii. “The ability of experts like Mark and others to go out and make ground measurements, and then connect satellite and ground data — that very activity is important. It provides a kind of calibration point,” added Moore, who helped facilitate project efforts through NASA’s HAQAST program.

Ultimately, Zondlo hopes the conclusions from this project can help researchers and public officials use satellite data to better understand air quality during any volcanic eruption. He noted that at the same time as Kilauea was wreaking havoc on Hawaii, in early June a violent eruption of Guatemala’s Fuego volcano killed at least 75 people and compromised air quality for thousands.

“Can this be expanded more generally to other volcanoes across the world?” asked Zondlo. While Hawaii’s air quality monitoring network may be less than ideal, he said, it is better than networks in many parts of the globe. “We want to use satellites to help understand where and when people should be concerned during a volcanic eruption,” he said.