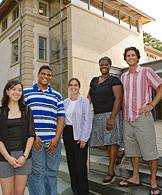 Community House aims to welcome middle school and high school students to its new after-school academy, building on its 40 years of service to the local community. Among those involved in helping launch the academy are (from left, at the new Community House facility at 58 Prospect Ave.): Christina Chang, a sophomore; Eric Plummer, a senior; Bonnie Lehet, assistant superintendent of Princeton Regional Schools; Marjorie Young, director of Community House; and Ken Soufl, a local resident and volunteer instructor. (Photo: Denise Applewhite)

Community House aims to welcome middle school and high school students to its new after-school academy, building on its 40 years of service to the local community. Among those involved in helping launch the academy are (from left, at the new Community House facility at 58 Prospect Ave.): Christina Chang, a sophomore; Eric Plummer, a senior; Bonnie Lehet, assistant superintendent of Princeton Regional Schools; Marjorie Young, director of Community House; and Ken Soufl, a local resident and volunteer instructor. (Photo: Denise Applewhite)

In the fall of 1969, two young children walked into a converted storefront on Witherspoon Street looking for a place to hang out after school and took the first steps into what would become a fruitful collaboration between Princeton University students and the local community.

Four decades after Community House began as an off-campus center where University students worked with area children, it has expanded to connect undergraduate volunteers with disadvantaged minority youth through several partnerships with local schools and organizations. Community House moved onto campus in 1982 and into its most recent location at 86 Olden St. in 1995.

To mark its 40th anniversary, Community House will hold a public open house for its new home at 58 Prospect Ave. from 1 to 3 p.m. Saturday, Sept. 19. Along with unveiling its new space this fall, the program is introducing a new initiative: the Community House Academy, an after-school program designed to tackle the minority achievement gap, which refers to the disparity between African American and Latino students and their white counterparts on a number of educational measures. 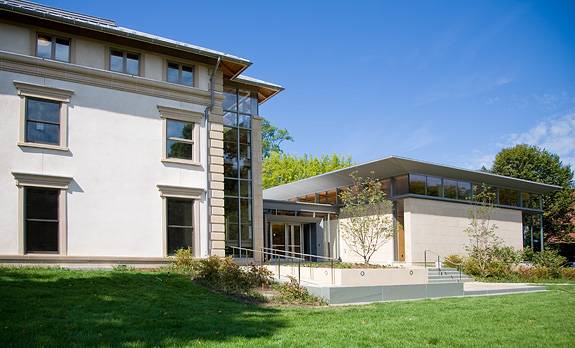 The new facility at 58 Prospect Ave. will offer the ideal space for the Community House Academy. The intensive educational program is designed to tackle the minority achievement gap. (Photo: Brian Wilson)

"The idea is for Community House's new tutoring center to become a hub for middle school and high school students, which is very different from what we have done in the past," said Marjorie Young, director of Community House. "We have gone out into the community a lot, but now we're inviting students to come to campus every day after school."

The academy, which launches Tuesday, Sept. 29, will provide area students with an intensive educational program to supplement their school curricula. A key facet of this initiative is encouraging community residents to volunteer as instructors alongside Princeton student and alumni participants. "We hope to increase the number of community folks who feel welcome and needed to participate in this process," Young said.

Community involvement is particularly key during times when University students are on breaks but local schools remain in session. "We don't want to have gaps where we have to shut down our program for weeks because we don't have the volunteer support. Life goes on for our participants, and they will still need help and need the center to be up and running," Young said.

In keeping with its efforts in recent years to strengthen its focus on closing the minority achievement gap, Community House has worked with Princeton Regional Schools officials and teachers to structure the program as a resource to help students clarify what they're learning in class.

"We're not trying to do things differently than the Princeton Regional Schools -- we have a great relationship with them. This is about investing more time in creative ways to give the students opportunities to relearn and review the material and its applications," Young said.

Bonnie Lehet, assistant superintendent of Princeton Regional Schools, is enthusiastic about Community House's new facility and its increased emphasis on middle school students. The new academy builds on Community House's Generation One program, which connects Princeton undergraduates with Princeton High School students to help them develop their academic skills and prepare to be the first in their families to attend college.

"Community House does so much for our kids at many different levels," Lehet said. "The work that they do at the high school with Generation One gives a genuine boost for students in their academics and it also serves to enhance their self-esteem through the encouragement and academic support. They work with the students from their freshman year through their senior year and really give them a lot of support to be successful in high school. And they do that in a number of ways at other grade levels as well.

"Now we're really excited about the after-school program," Lehet said. "It brings our students onto campus, which is exciting for them, and they'll have the students at the University who will mentor and inspire them to think about what their potential is and the possibilities beyond secondary school. It benefits our students tremendously." 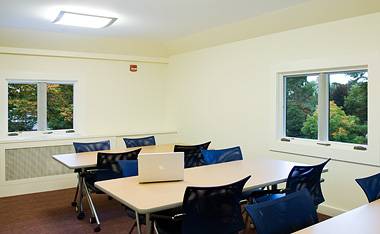 The academy will be a topic of discussion at the Sept. 19 open house, which will feature a keynote address by John Mavros, a 1971 Princeton graduate who was one of seven student founders of Community House. Janet Dickerson, vice president for campus life, and Judith Wilson, superintendent of Princeton Regional Schools, also will speak at the event.

Motivated by statistics showing that African Americans in the Princeton community had less schooling and often substandard housing, the founding students worked with University administrators to develop a plan to create a residential community action center at 164 Witherspoon St. The students moved into the second floor of the building and remodeled the empty storefront on the first floor.

"We thought we would do voter registration, help people get better housing and things like that," Mavros recalled. "When we opened, the people who first came in were these two kids who lived around the corner and needed a place to go after school to hang out. We got excited! We finally got somebody to come in and say that they wanted to use the place that we had opened to serve the community."

Other local youngsters soon followed. "We did as much as we could to accommodate them and offer some activities, recreation and enrichment for the kids when they came around after school. We found that was the niche that Community House could hang its hat on and begin to interface with residents of the community. The program and the activities we sponsored began to take shape in the fall and by the spring we had made inroads and attracted students from the high school, the middle school and the elementary school." 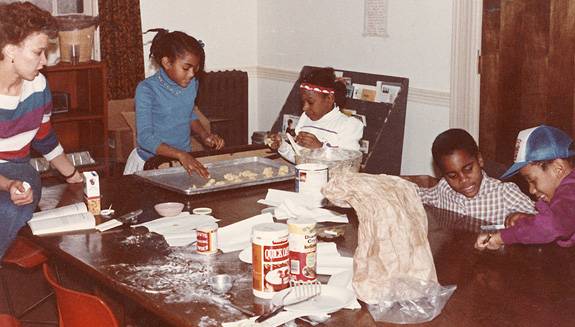 Community House moved onto campus in 1982 after its founding on Witherspoon Street in 1969. Shown here engaging with the local youngsters is Karen Ashby, a 1984 graduate. (Photo: Courtesy of Community House)

Mavros, who after graduating founded a program called the Joint Connection that assists families of prisoners in New Jersey, said he is "absolutely amazed" to see how Community House has grown and thrived over its 40 years.

"I'm quite impressed by what students are doing today and what the University is doing to keep the legacy alive and to reshape the activities and services that Community House offers in accord with what is needed in the Princeton community," said Mavros, who now teaches psychology and general education courses at Berkeley College.

This summer, Community House and the Princeton Center for Complex Materials sponsored a pilot outreach program for area middle school students from backgrounds that are underrepresented in the fields of science, technology, engineering and mathematics. The program was intended to stimulate students' interest through hands-on experiments and exposure to scientists and engineers.

This summer, Community House and the Princeton Center for Complex Materials sponsored a pilot outreach program for area middle school students from backgrounds that are underrepresented in the fields of science, technology, engineering and mathematics. Here, participants in the Princeton Materials Academy toured an array of solar panels on an outdoor deck of the Princeton Engineering Quadrangle. (Photo: Denise Applewhite)

Another new program in the works is a collaboration with the YMCA to develop a Saturday morning mentoring program involving campus and community volunteers to complement an existing tutoring program with Princeton students.

"Our plan is to focus on sixth-graders to start. The aim will be to stay with our kids as they progress through school, until they graduate," said Kate Bech, chief executive officer of the YMCA. "My goal for the kids who participate is that by the time they graduate they not only have confidence, knowledge and skills but they also have a network of adults who care about them and who are connected to them."

As part of its 40th anniversary celebration, Community House also is trying to recruit 100 campus volunteers for the YMCA's community playground project on Saturday, Sept. 26. The playground is designed by children and built by volunteers. The project is funded mainly by KaBOOM!, a nonprofit organization, and the University also contributed funds.

Community House also plans to expand a family literacy program through local churches, which began as a pilot program at First Baptist Church last spring. The student group Princeton Engineering Education for Kids is participating in this effort to help raise awareness about careers in science.

Senior Eric Plummer is a member of the Community House student board helping to plan for the move into the new building and the launch of the academy. Plummer is a project coordinator for Crossings, an initiative that encourages John Witherspoon Middle School students to examine issues surrounding diversity.

Plummer, an economics major, teaches in the Crossings program and will be an instructor in the academy. Through his experience with Community House, he is interested in pursuing a teaching career.

"I'm excited about the new building and also that Community House is concentrating its effort" on the minority achievement gap, Plummer said. "Hopefully it will show that with our manpower we can actually make a change."