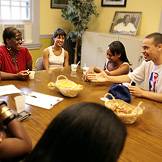 Marjorie Young (top left) meets with Princeton student volunteers at Community House, which offers programs that support disadvantaged minority youth in the local community. Young's focus on community service was inspired in part by her move to Princeton from Haiti as a girl.

Below left: One of Young's major accomplishments has been the launch of a summer computer camp to help local middle school students from disadvantaged backgrounds bridge the digital divide. It began with 12 pupils in 1999 and enrolled 40 this year. The camp also has expanded to include lessons in science, math, writing, the creative arts and Spanish in addition to technology.

At 11 years old, Marjorie Young embarked on an adventure that would set the course of her personal and professional life.

Young, who has been director of the University's Community House for the past 10 years, first came to Princeton Borough from Haiti as a child along with her two sisters, Romy and Carine, and her brother, Moshe. Their mother had moved to the area years earlier, working as a nurse's aide at Princeton Medical Center, with the intention of bringing her children to America to get a better education.

When they arrived at their new home on Green Street, the children did not speak a word of English. But they quickly benefited from the assistance of local residents — some with ties to Princeton University — who volunteered many hours to help the children with their language skills and their transition to life in America.

The experience was a formative one for Young, whose mission at Community House is to develop and lead programs that connect University volunteers with disadvantaged minority youth in the local community.

"I recall feeling amazed that there were so many people in this community who were willing to support us and help us get acclimated to our new surroundings," Young said. "That was my first glimpse at Princeton — the University as well as the community — and my impression both then and now is that this is the kind of community where people come together to help and rally around specific needs."

Community House, which was established by undergraduates in 1969, works with Princeton student volunteers to offer a variety of educational services to local youth. Programs include mentoring and tutoring of students from preschool through high school; health awareness training; courses in English as a second language; and academic enrichment programs during the school year and in the summer. Under Young's leadership, Community House has expanded and enriched its programs and forged stronger ties with community partners such as the Princeton Regional School District, the Princeton Housing Authority, Corner House and Prince-ton Young Achievers.

"Marjorie combines years of experience in higher education and an expertise in community service with a deep and personal knowledge of the Princeton community. That combination is reflected in her easy and effective way of bridging community and University concerns and interests," said Kiki Jamieson, director of the University's Pace Center. Community House joined the Pace Center this summer.

"Marjorie is a dynamic force — a lively and effective advocate for the minority children of Princeton, particularly those who would not otherwise have access to the additional academic and cultural resources needed to support their education," Jamieson said. "Her own experience as a child in Princeton informs her understanding of community needs, and similarly her years of experience in higher education give her particular expertise in teaching students and others how to respond to those needs effectively."

Young's commitment to service was forged in childhood through the example of her parents, Dieutel and Bertha Toussaint, and her maternal grandmother, Carida Jean-Simon, who helped raise Young and her siblings after her mother migrated from Haiti to Princeton.

"My mom was a schoolteacher in Haiti and my father was a former congressman who was very involved with community development. I remember going to tree-planting days that my father would sponsor in his community," Young said. "Even at a young age, I remember my father and mother being very community-focused, always reaching out to see what they could do for someone else. I credit my parents and my grandmother for teaching us that."

In the years before joining their mother in Princeton, Young and her siblings went to boarding school in Haiti's capital of Port-au-Prince and spent summers at the homes of their father and grandmother in the southern towns of Liancourt and Montrouis. When Marjorie was 11 — the second oldest of the four siblings — the children moved to Princeton.

"What is ingrained in my mind about my move to the United States is that a huge sacrifice was being made for me so I could get a better education and eventually live a better life. Right at the onset it was very clear to my siblings and me that we needed to do well in school — it wasn't an option," Young said.

They arrived in July 1975, speaking only French. "We watched a lot of 'Sesame Street' and spent a lot of time at the Princeton Public Library," Young recalled. That fall they enrolled in St. Paul School, which was a daunting experience at first. "It's very difficult to understand what it was like unless you've experienced it also — you speak a language, but it doesn't register with the people around you, and it's overwhelming," she said.

The school placed an advertisement in a local newspaper seeking French-speaking volunteers to help with the children. "Within a few days, they had a number of people who volunteered," including a number of retired local teachers and spouses of University employees, Young said.

"They would come to school and spend time with us, teaching us conversation, spelling, phonics and proper pronunciations. People took us to the library, they took us to farms, they took us horseback riding — they invested a lot of time helping us get acclimated to the culture and to speak English," she said.

Young thrived at St. Paul and later at Princeton High School. She continued her education at Douglass College at Rutgers University as a psychology major. Throughout her high school and college years, she was active in student government and service activities, and helped found the Haitian Association at Rutgers University.

After graduating from college, she married Peter Young Jr., a classmate from Princeton High School, with whom she has three sons, Tamai, Patrick and Zachery. When Tamai was born, she left her position with Serve Mercer — a program for mentally ill, chemically addicted clients — and started a home day care service while working part time with community organizations. Eventually, Young joined the Princeton Housing Authority as an activities director while, at the same time, working as a nursery school teacher at the YWCA Prince-ton's multicultural day care center.

At the YWCA, Young worked with several Princeton University student volunteers, one of whom, Safiya Daniels of the class of 1997, brought her a job description for the open position of Community House director. Young got the job and began in July 1997. 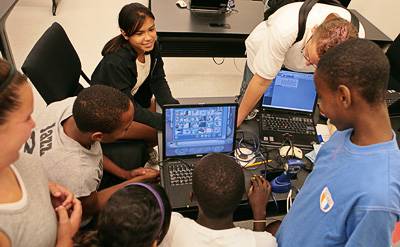 Focus on the achievement gap

Young said she has been gratified by the expansion of Community House programming during her tenure as director, noting an increase in the number of student project coordinators and volunteers as well as a focus on strengthening programs provided to youth and families in the Princeton community.

One of her major accomplishments has been the launch of a summer computer camp to help local middle school students from disadvantaged backgrounds bridge the digital divide. It began with 12 pupils in 1999 and enrolled 40 this year. The camp also has expanded to include lessons in science, math, writing, the creative arts and Spanish in addition to technology.

"Marjorie has many, many resources, so if there's something that a student needs she always has someone who is willing to help and support that student, which has been fabulous for the high school," said Angela Siso, student activities coordinator at Princeton High, who runs Generation One with her colleague Christine Carbone and Young.

"Marjorie definitely has a passion for helping the students, and it's nice to see someone in another organization who is as committed to the program as Christine and I are. It's been a great working relationship and a great experience," Siso said.

Going forward, Young is applying lessons from her own continuing education to guide the direction of Community House. She recently completed a master's degree in human services from Lincoln University, for which she wrote a thesis on the minority achievement gap — a critical national issue that applies to the Princeton schools as well.

While Community House always has supported local minority students, "we're now being more intentional about decreasing the minority achievement gap and improving minority students' academic achievement in all our programmatic endeavors," Young said. "This is a national problem that Princeton University via Community House can take the lead on with the focus of decreasing, if not eradicating, this problem in our local schools."

Young and Jamieson recently met with Princeton Superintendent of Schools Judith Wilson to share their vision for Community House's work on combating the achievement gap, and they are working with other community partners to sharpen the focus of programming and activities.

"We envision a consortium of people who are thinking about this and willing to work together to come up with creative ways to tackle the minority achievement gap," Young said. "We want to do everything we can to give the kids we work with the necessary tools that will enable them to overcome the minority achievement gap and go on to live successful, productive lives."

With a hectic schedule of work and raising three sons, Young continues to find time for a range of service activities, such as serving as a classroom parent, participating in charity walkathons, doing translation work for Haitian immigrants, and bringing her children on service trips to Morocco and Guatemala. Through her own focus on service, Young seeks to serve as an example for her family and the students with whom she works.

"One of the things that I try to stress to our volunteers and project coordinators is that it doesn't matter if you're going to be somewhere for six months or four years or if you've chosen that to be the community where you're going to live — it's really important to be engaged and involved and to give back in whatever capacity you can," she said.

Ivy Athletes Charity Team unifies student-athletes for a cause