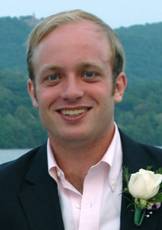 Princeton undergraduate Eliot Kalmbach died in a mountaineering accident in Wyoming Sept. 22. He was 24.

Kalmbach was majoring in geosciences and was a resident of Mathey College. He was planning to return to the University in February 2010 to complete his senior year.

He died from a fall while hiking with a friend at Teewinot Mountain in Grand Teton National Park. He was a native of Downingtown, Pa.

Relatives and friends are invited to his funeral service at 10 a.m. Monday, Sept. 28, at St. Andrew's Episcopal Church, 7 St. Andrew's Lane, Glenmoore, Pa. Interment is private. Visitation will be held from 9 to 10 a.m. Monday at the church.

A campus memorial gathering is being planned. Details will be announced on the Princeton home page as they become available.

Students who would like to speak with counselors are encouraged to contact Counseling and Psychological Services. University Health Services is open 24 hours daily, and clinicians at Counseling and Psychological Services are available from 8:45 a.m. to 4:45 p.m. Appointments can be made in advance by calling (609) 258-3285. Pastoral counseling is also available through the Office of Religious Life.